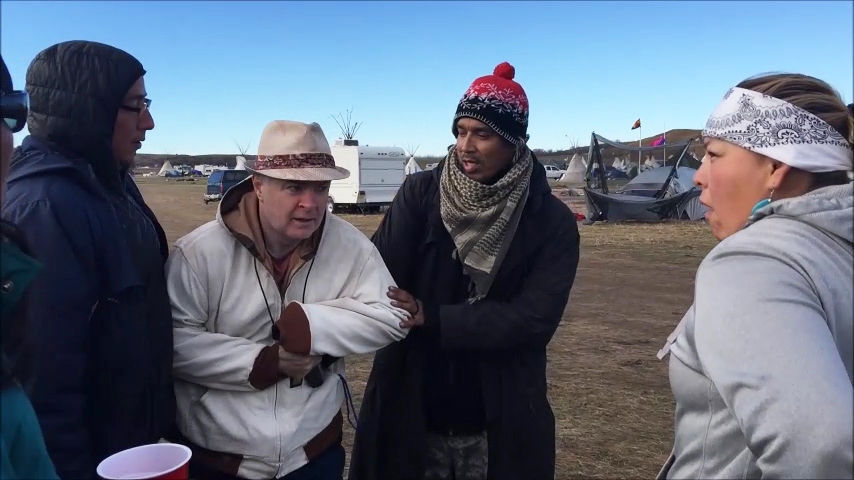 In this image from video, filmmaker Phelim McAleer, second from left, said he was assaulted while conducting an interview and he and his crew held hostage in their vehicle for 30 minutes when they attempted to leave the camp Tuesday, Oct. 18. 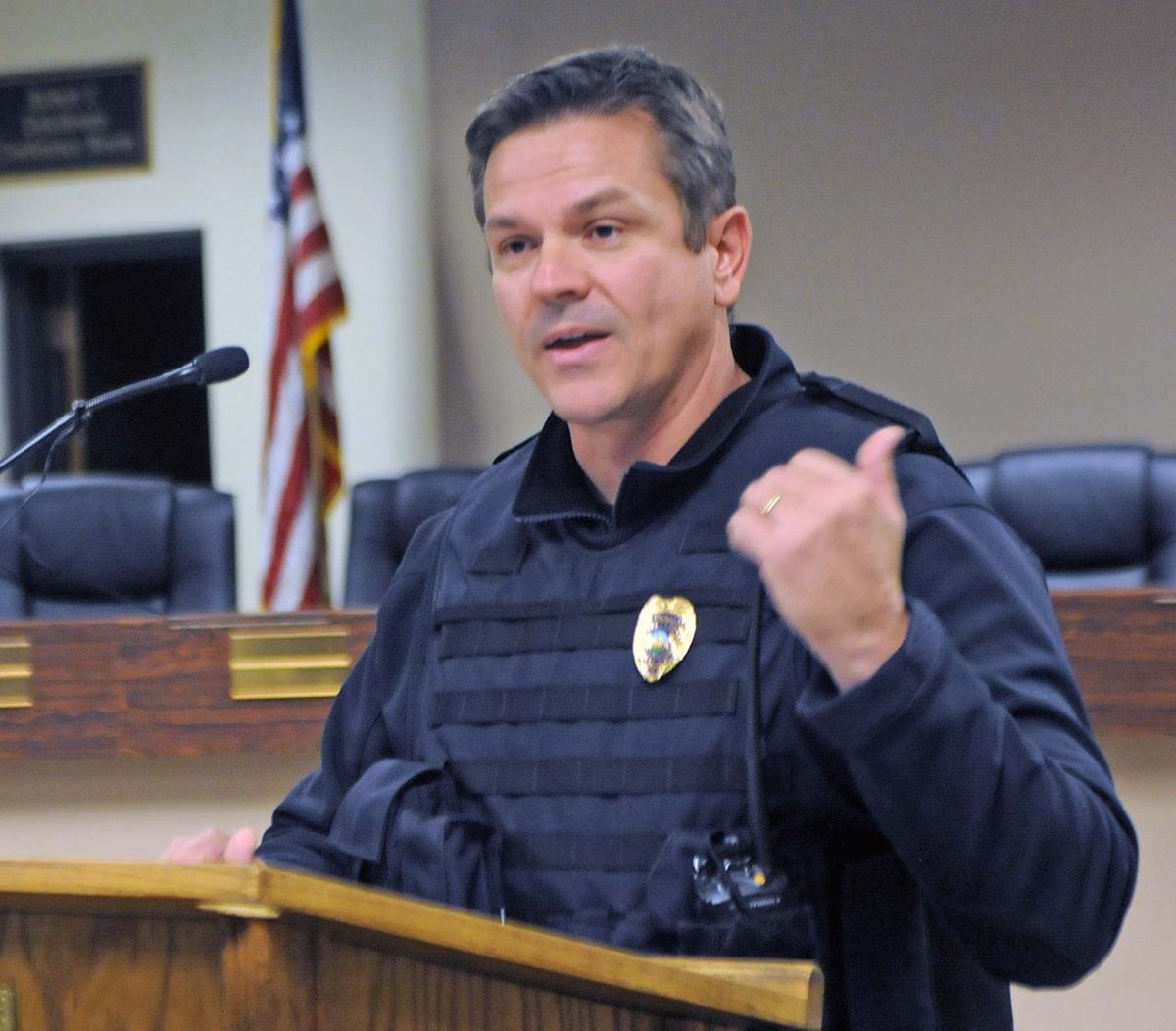 TOM STROMME/Tribune Bismarck police officer Lt. Glen Ternes describes a recent situation he observed where people with bandanas covering their faces were surrounding a vehicle at the protest camp in Morton County. For a video of the event go to www.bismarcktribune.com. 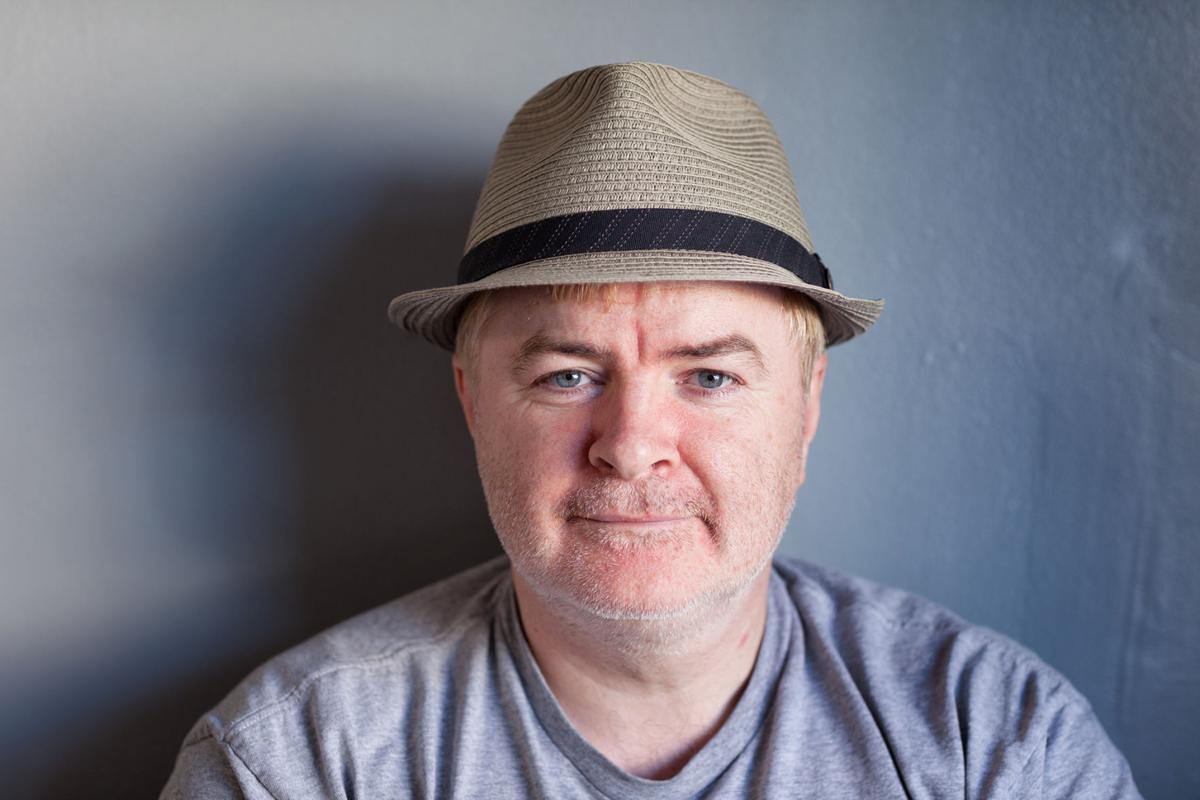 A film crew covering the Dakota Access Pipeline protests says they were accosted by protesters and prevented from leaving the camp in southern Morton County when they started asking questions about how protesters were using fossil fuels.

Filmmaker Phelim McAleer said he was assaulted while conducting an interview and he and his crew held hostage in their vehicle for 30 minutes when they attempted to leave the camp Tuesday, Oct. 18.

“It was a mob scene and there was no leadership and nobody in charge and we feared for our lives,” McAleer told Forum News Service on Wednesday.

McAleer, one of the filmmakers behind “FrackNation,” a documentary that aimed to counter the anti-fracking movie “Gasland,” said he was reporting on the pipeline protest for the FrackNation Facebook page.

McAleer, producer Magdalena Segieda and a local photographer, who McAleer declined to identify, spent time at the camp on Monday and covered two protests in Bismarck-Mandan.

“We weren’t asking many questions at that stage, we were observing and filming,” McAleer said.

About 10 a.m. Tuesday, they were conducting interviews near the kitchen area of the camp and asked questions that included how the protesters traveled to the camp and pointed out that the tents were made from plastic, a product of oil.

“They’re using fossil fuels to come and protest fossil fuels,” McAleer said. “Is this not a contradiction, is this not hypocrisy?”

During one interview, McAleer said a man lunged at him, grabbed the microphone and elbowed and pushed him trying to take away the microphone.

The crew then realized it was an unsafe situation and went to their vehicle to leave. Vehicles blocked them from leaving and a crowd McAleer estimated at about 30 surrounded the vehicle. Some had sticks, others threatened to slash their tires and others were demanding the video be deleted. Some also shook the car and punched the windows, according to the filmmakers.

Morton County Sheriff’s Department spokeswoman Donnell Preskey said authorities are investigating the incident for possible charges including terrorizing and felonious restraint, and officers have reviewed the video recorded by the filmmakers, part of which was shown to reporters at a press conference Wednesday afternoon.

“This is a public location that this campsite is on, and that is not acceptable to not allow people to leave their camp,” Morton County Sheriff Kyle Kirchmeier said, referring to the camp’s location on U.S. Army Corps of Engineers land.

Bismarck Police Lt. Glen Ternes, who was among the dozen officers in five squad cars that responded to the scene, described seeing the maroon Chevy Traverse being shaken by people in bandanas and blocked in by a white pickup. Authorities didn’t want to go into the camp but would have if necessary, he said.

“I had to say please in the PA to get them to release that vehicle, and that just basically was because we were sitting there and I can’t tell you the number but there was a lot of bandanas, a lot of people that were really riled up, and I had 12 officers there,” he said.

McAleer disputed a social media report that the crew was filming children and said all interviews were conducted in a public area of the camp.

McAleer, who has been a journalist for 30 years and covered The Troubles conflict in Northern Ireland, said the most frightening thing was “so many people there willing to do so many crazy things.”

“There seemed to be no voice of reason there,” he said. “Anything could have happened.”

The crew called 911, but cell reception was poor and they were unsure if police were on their way.

“For both of us, it was most the terrifying experiences of our lives,” McAleer said.

After being trapped in their vehicle for 30 minutes, the journalists were able to leave with a police escort after law enforcement arrived and were taken to the Morton County law enforcement center in Mandan, where they were interviewed. They were staying at the Prairie Knights Casino and Resort on the Standing Rock reservation but decided to change hotels after some protesters approached them at the hotel and began filming them.

McAleer said he does not plan to return to the camp and said journalists should not cover the protest if they’re not allowed to ask the pipeline opponents difficult questions.

“What’s very clear is that when journalists don’t ask softball questions, then they get attacked and assaulted and put in fear for your lives,” he said. “This sends out a very clear message we won’t want difficult questions.”

Cody Hall, a spokesman for the Red Warrior Camp within the Oceti Sakowin Camp where the incident took place, said he didn’t witness Tuesday’s incident but added journalists who obey the camp’s house rules are treated with respect.

“If you had the intention to kind of stir the pot, you’d better be able to take the steam, as well,” he said.

In this image from video, filmmaker Phelim McAleer, second from left, said he was assaulted while conducting an interview and he and his crew held hostage in their vehicle for 30 minutes when they attempted to leave the camp Tuesday, Oct. 18.

TOM STROMME/Tribune Bismarck police officer Lt. Glen Ternes describes a recent situation he observed where people with bandanas covering their faces were surrounding a vehicle at the protest camp in Morton County. For a video of the event go to www.bismarcktribune.com.