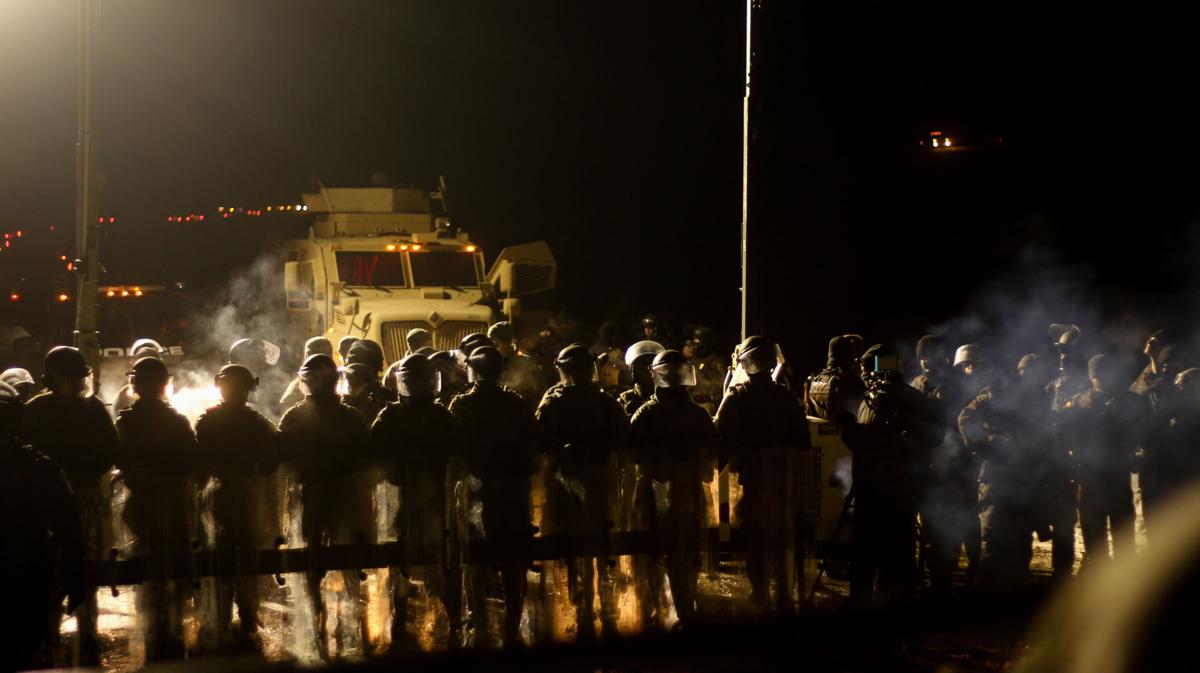 Dakota Access Pipeline protesters faced off against law enforcement at the Backwater Bridge on Monday night. 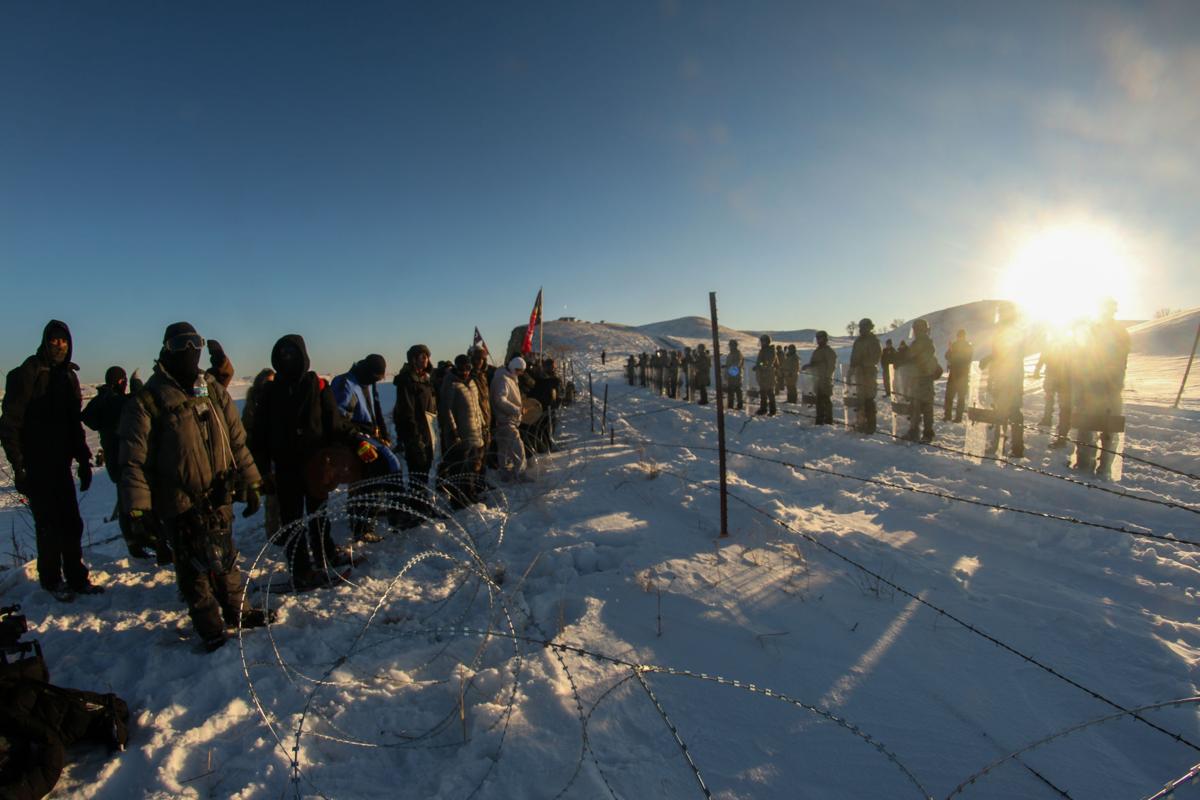 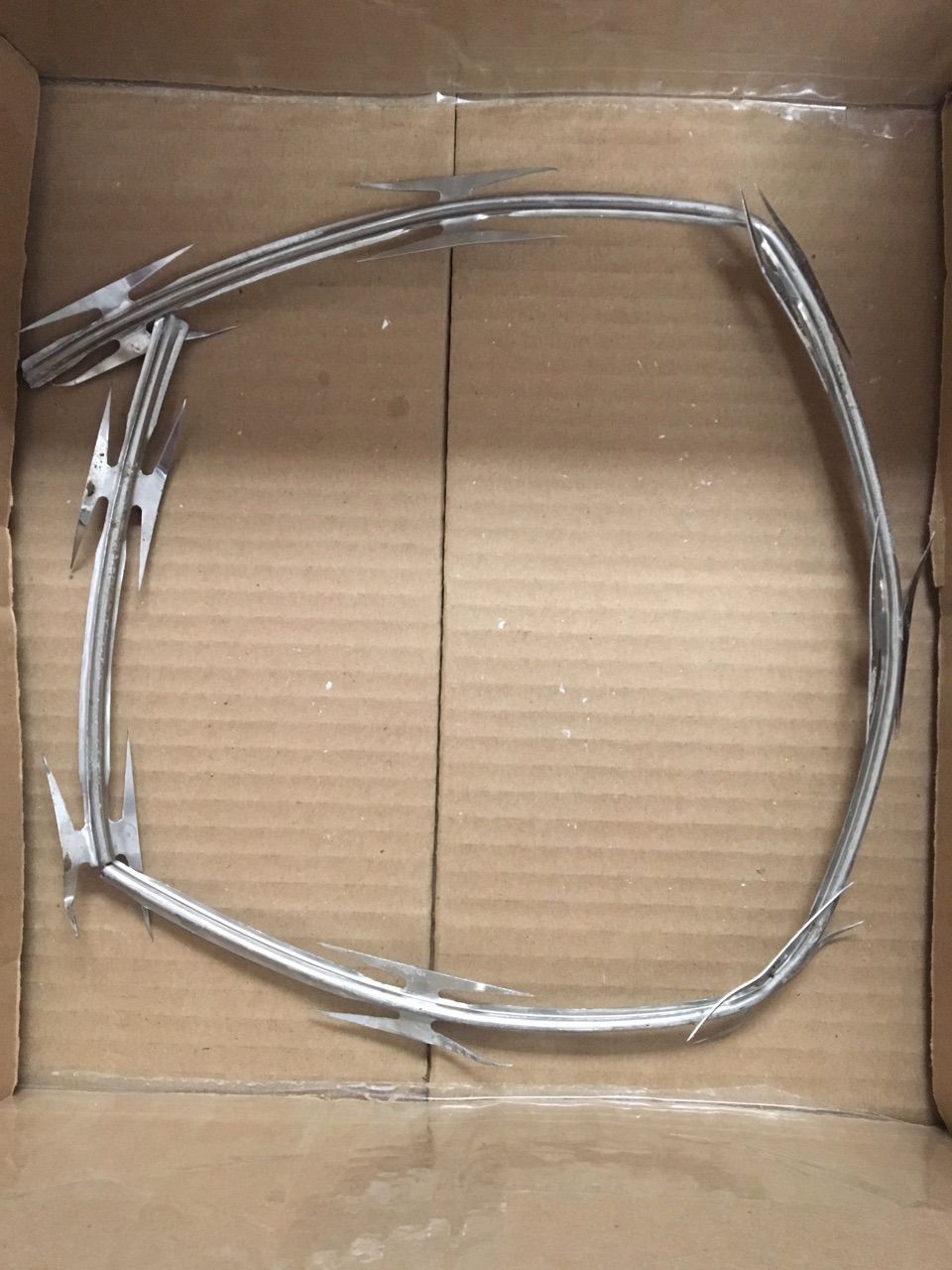 Pipeline protesters formed concertina wire into Frisbees allegedly thrown at law enforcement during a protest on the Backwater Bridge on Monday night.

Fourteen people were arrested during an hours-long protest in which people approached the horizontal drilling site for the pipeline and demonstrated on the Backwater Bridge.

The protests began around 3 p.m. Monday and continued until about 1 a.m. Tuesday, according to the Morton County Sheriff's Department. People were arrested on charges including criminal trespass, engaging in a riot, marijuana possession, assaulting a peace officer and preventing arrest.

During the protest, which was the largest in weeks, about 200 people walked along the frozen Cannonball River to approach the area where Dakota Access aims to drill the pipeline under the Missouri River. Some cut wire to access the Cannonball Ranch property, according to the sheriff's department. About 40 to 50 people gathered on the Backwater Bridge, cutting security wire and dismantling lights. There, protesters also allegedly crafted the cut wire into Frisbee shapes and threw them at law enforcement.

Police used less lethal ammunition, as well as pepper spray and tear gas to repel the protesters. They also used an Avenger missile launcher system to observe the camp and protests, but it did not contain any ammunition, according to the sheriff's department.

"These systems are used strictly for observation of ungoverned encampments to help protect private property and maintain public safety in southern Morton County, N.D. The systems have no munitions; further, there is no authority to arm these vehicles with munitions," according to a release from the sheriff's department.

Protesters fear the pipeline will pollute the Missouri River in case of a leak. They say the closure of the Backwater Bridge cuts off emergency vehicles, causes economic burden to the Standing Rock Sioux Tribe and prevents the right to protest.

Mary K. Johnson, a member of the Oceti Sakowin camp media team, went along to the drill site. She said people were on a prayer walk, which was timed to coincide with Martin Luther King Day. The walk, which remained mostly peaceful, was in the spirit of King and standing up for justice and indigenous rights, she said. Some people had conversations with the officers, she said.

She contended the group on the bridge was a different crowd — younger, newer people — and she disavowed some of their actions.

"Yelling at (law enforcement) and saying degrading things is not the Lakota way," Johnson said.

Camp security was focused on the prayer walk, she said, and may have missed the people who walked onto the bridge and might have otherwise been turned around.

As of 4:20 p.m. Tuesday, protests were ongoing on the Backwater Bridge and two more people were arrested for trespass.

A total of 603 arrests have been made in connection with the protests.

SIOUX FALLS, S.D. — A day after she called for peace and healing following the riots at the U.S. Capitol by supporters of President Donald Tru…

A balmy and potentially record warm start to the workweek promises to give way to more wintry conditions as the weekend nears.

Dakota Access Pipeline protesters faced off against law enforcement at the Backwater Bridge on Monday night.

Pipeline protesters formed concertina wire into Frisbees allegedly thrown at law enforcement during a protest on the Backwater Bridge on Monday night.