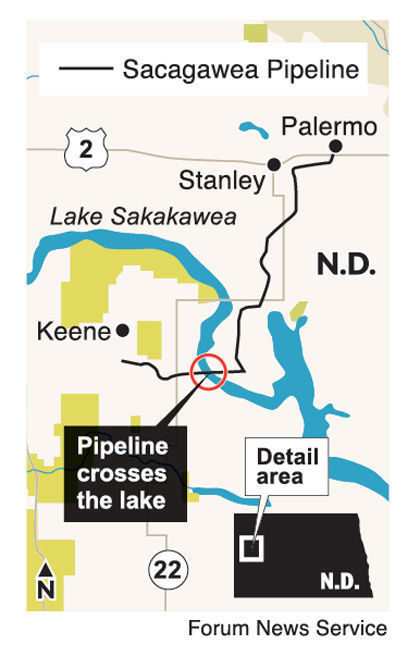 NEW TOWN – A former crew member on an oil pipeline under construction in North Dakota claims that pipe installed under Lake Sakakawea was not properly inspected and he fears the lake could be at risk.

But the owner of the pipeline contracting company stands by the work and says the claims are false accusations made by workers who were fired.

Federal pipeline regulators are investigating the allegations, which were also brought to the North Dakota Public Service Commission’s attention this week.

The 70-mile Sacagawea Pipeline will carry oil beneath Lake Sakakawea for 7,000 feet, crossing the lake south of New Town. The project required underground boring for 11,000 feet – more than two miles – according to information presented to the PSC.

Pipeline contractor Kenny Crase writes in a sworn statement filed with the PSC and federal regulators that he was ordered to skip a final coating inspection on a section of the Sacagawea Pipeline before another contractor installed the pipe under Lake Sakakawea in July. External coating protects the steel pipe from corrosion.

“To me, it’s an accident waiting to happen,” Crase said in an interview with Forum News Service.

Crase said he came forward with his concerns after being fired by contractor Boyd & Co. because he fears there are defects in the pipe coating that could cause oil to spill in the reservoir, which is the drinking water source for several western North Dakota cities.

Crase says he has 34 years of construction industry experience including working for five years in North Dakota as a pipeline inspector. On this job, he was in charge of operating a device known as a holiday detector, which finds defects or bare metal spots in the pipe coating.

“The coating is on it to protect it from rusting from the outside in,” Crase said.

“I cringed when they hooked to it and pulled it because we never made a single run through there when we didn’t find holidays, which is bare metal,” Crase said. “If I was a betting man, I’d bet there’s bare metal spots.”

In addition to Crase’s statement, an anonymous caller reported to the federal Pipeline and Hazardous Materials Safety Administration in late July that there may be issues with the coating of the pipeline installed under Lake Sakakawea, according to a document filed with state regulators. Crase said he is not the anonymous caller.

Mike Boyd, owner and CEO of pipeline contractor Boyd & Co., disputes the claims. Boyd said there was a section of pipe that did not meet the standards, but those workers were fired and the coating work was redone “to perfection.” The work was also approved by inspectors working for Paradigm Energy Partners, which is part of Sacagawea Pipeline Co., Boyd said.

“I have 100 percent confidence in the job that was done,” Boyd said. “It’s going under the lake, we have to do it right.”

Boyd said the coating crew was fired for not meeting standards set by the contractor and Paradigm, and now they’re making false accusations.

Crase said Boyd’s account is a lie and that his crew watched the pipe get installed under the lake without a final inspection or additional coating work.

“I don’t want to be blackballed from the oil industry, but if it comes to that because of me telling the truth and worrying about the integrity of the pipe, so be it,” Crase said.

Crase raised his concerns with the Laborers District Council of Minnesota and North Dakota. That group sent his statement and a notice of potential violation to the PSC, PHMSA and the U.S. Army Corps of Engineers, which all have some level of jurisdiction over the pipeline.

“There are some serious allegations in there so this is pretty high priority that staff is working on right now,” said Kalk, adding the commission will likely discuss the matter at its Aug. 17 meeting.

PHMSA is conducting an investigation into the allegations, and the Sacagawea Pipeline Co. has provided information the agency requested, said Troy Andrews, Paradigm CEO, in a letter to North Dakota regulators.

It’s unknown how often inspectors hired by the PSC have been on the job site. The project has been under construction since early this year but no inspection reports have been filed with the PSC. The pipeline is not yet in use.

Kevin Magstadt of Wenck Associates in Mandan said he expects the first inspection report to be filed within a week. Magstadt said the timing of the reports depends on when crews complete the work being inspected.

Kalk said inspectors will tell the commission right away if they see something of concern.

PHMSA officials were on site to inspect the project twice, on April 26-27 and July 19-20, and their review included inspecting pipe welding and coating, Andrews wrote to the PSC. The pipeline owners have received no notice from PHMSA of any violations, Andrews wrote.

The pipeline was installed under the lake on July 16-17, said Jason Stelzer, a manager with Paradigm.

PHMSA did not immediately respond to a request for comment.

The Corps, which issued a permit for the lake crossing, is working with PHMSA to discuss recommended actions, said Corps spokeswoman Eileen Williamson.

Sacagawea Pipeline Co. is a joint venture involving Paradigm Energy Partners, which is responsible for construction of the project, Phillips 66, which will operate the pipeline, and Greywolf Midstream, an entity owned by Three Affiliated Tribes that’s an investor in the project.

The $125 million pipeline will transport 140,000 barrels of oil per day from south of Keene in McKenzie County to a rail terminal near Palermo in Mountrail County. The 16-inch steel pipe under the lake is at least 100 feet below the lakebed, with a wall thickness of a half-inch under the lake for extra protection, a Paradigm official told the PSC.

The Laborers Union initially testified in support of the Sacagawea Pipeline when it was proposed to the PSC. In particular, union representatives said they had confidence in the track record of Michels Corp., the contractor selected to do the horizontal directional drill beneath the lake.

“It’s frightening to think that pipe could have been pulled under Lake Sakakawea without being properly inspected,” said Kevin Pranis, a spokesman for the Laborers Union. “We hope that the Public Service Commission and the federal and state agencies responsible for pipeline safety and the protection of waterways will get to the bottom of this before the pipeline is placed into service.”

State regulators later approved two additional legs of the Sacagawea Pipeline, an 8-mile leg to connect with an Enbridge terminal in Mountrail County and a 15-mile leg in McKenzie County to connect with the Dakota Access Pipeline.

TABOR, S.D. — A South Dakota man is facing a felony drug charge after his mother unknowingly served his marijuana-laced brownies to a group of…

K-9 Lee is an accelerant-detecting dog for use in investigating suspected arson or suspicious fires.

The operator of a pipeline slated to transport carbon dioxide into North Dakota for disposal intends to pick up emissions captured from an ammonia plant planned for Grand Forks.

A judge has denied North Dakota's request for an order forcing the federal government to hold oil lease sales.

An Illinois court has revoked state regulators' decision to allow DAPL to operate with an expanded capacity but will not restrict the amount of oil flowing through the pipeline during a review.

A court hearing on North Dakota’s challenge to the Biden administration decision to halt oil and gas lease sales last year focused on how to factor in a sale planned in coming weeks.