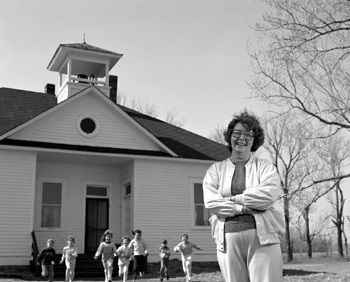 Janice Herbranson, shown here in 1990, taught for many years in the one-room schoolhouse in McLeod, N.D. 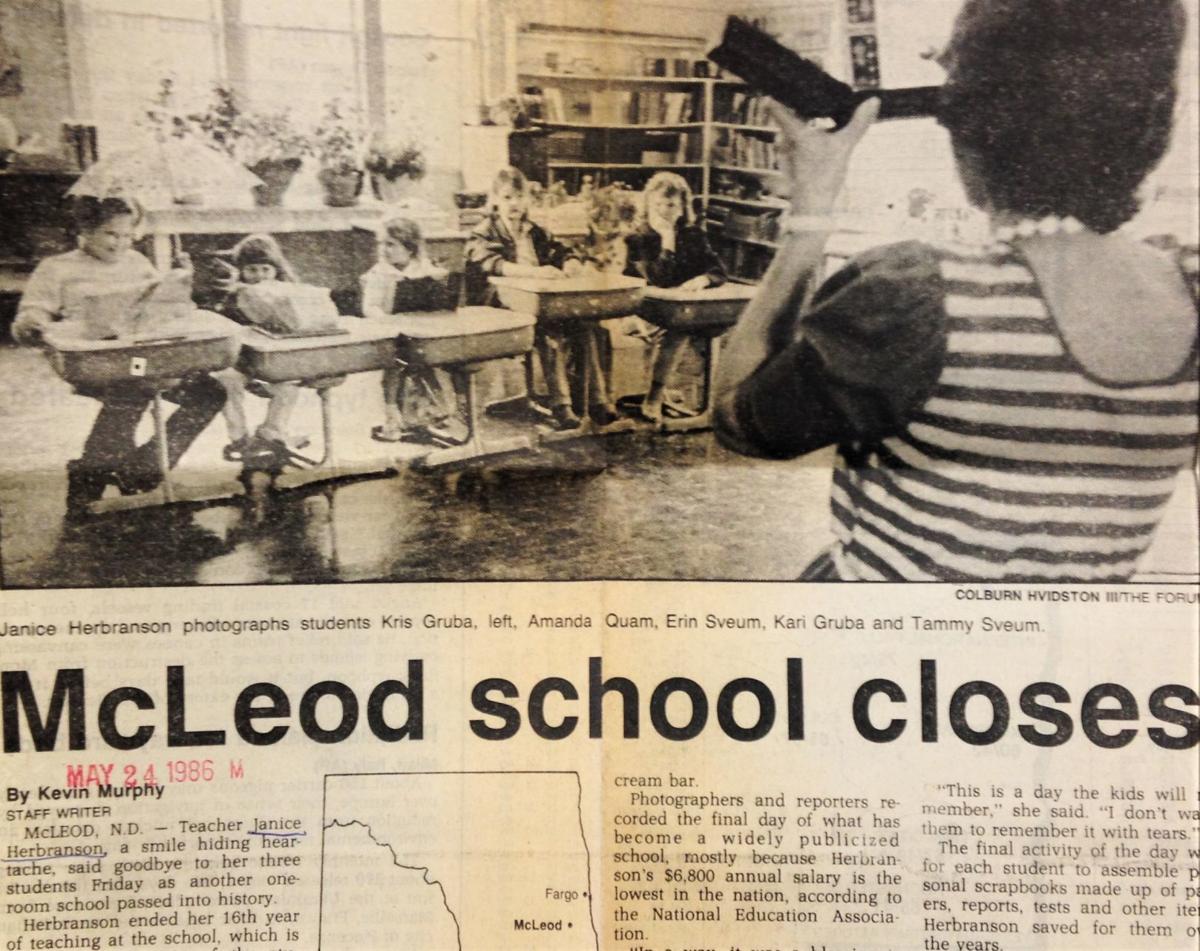 Janice Herbranson takes a photo of students at the McLeod, N.D., school in 1986.

MCLEOD — Tim Herbranson remembers his mother, Janice, as a hard-working soul who persevered through many heartbreaks, including the death of her husband in a plane crash in the early 1970s and the death of a son a few years later.

Herbranson said the world may remember his mother, who died Friday at age 85 in Hankinson, as possibly the last person to teach in a one-room schoolhouse in North Dakota when she retired in 2002.

"I believe she was," said Herbranson, who will gather with family and friends to celebrate his mother's life on Friday, Sept. 27, at Zion Lutheran Church in rural Leonard.

The latter was owned by Janice Herbranson's family from the early 1970s until just recently, when the establishment was sold.

Tim Herbranson said the income from the business was important to his mother, who according to a 1983 survey by the National Education Association was the nation's lowest paid teacher that year with an annual salary of about $6,300.

After the story started making headlines, the school board increased her pay to about $6,800.

After the school closed, Herbranson interviewed for a teaching job in Alaska, but decided against it because she felt she hadn't been treated well during her visit to the community, Tim Herbranson said.

Instead, he said his mother took a job in a Mexican border town in Texas, where she worked for a time teaching young children, many of whom spoke little English.

When the school in McLeod reopened in 1988, Herbranson returned to North Dakota and taught at the school until her retirement in 2002, according to Tim Herbranson, who was one of his mother's students during fourth and fifth grades.

During those years, Herbranson said he saw firsthand how much his mother did for her students, including making them breakfast if they were hungry.

"She loved her teaching," Herbranson said, recalling how his mother always put on a huge Christmas program during the holidays.

A letter from the White House

He added he believes his mother enjoyed the celebrity that came with the national media attention in the 1980s, which included a write-up in People magazine and a TV appearance on "Good Morning America."

He recalled how tickled his mother was to receive a letter from President Ronald Reagan, but said she was just as moved by correspondence she received from former students. One whom she taught in Texas wrote to his mother to let her know that he had grown from a young boy who could barely speak English into someone who graduated from law school and was working as a lawyer in New York City.

Over the years, Janice Herbranson would tell her story to various reporters, sharing openly about the loss of her husband, Stanley, to a plane crash and the death of her teenage son, Dean, in a fire. She also talked about her struggle with alcoholism and her dedication to AA and sobriety.

In a 1986 story that appeared in The Forum of Fargo Moorhead when the school in McLeod appeared to be closing for good, Janice Herbranson is quoted as stating she was glad the media was on hand for the event, because it helped take everyone's mind off the sadness of losing the school.

“If we were all alone, we’d have to dwell on this being the last day. This is a day the kids will remember. I don’t want them to remember it with tears," Herbranson said.

Janice Herbranson, shown here in 1990, taught for many years in the one-room schoolhouse in McLeod, N.D.

Janice Herbranson takes a photo of students at the McLeod, N.D., school in 1986.