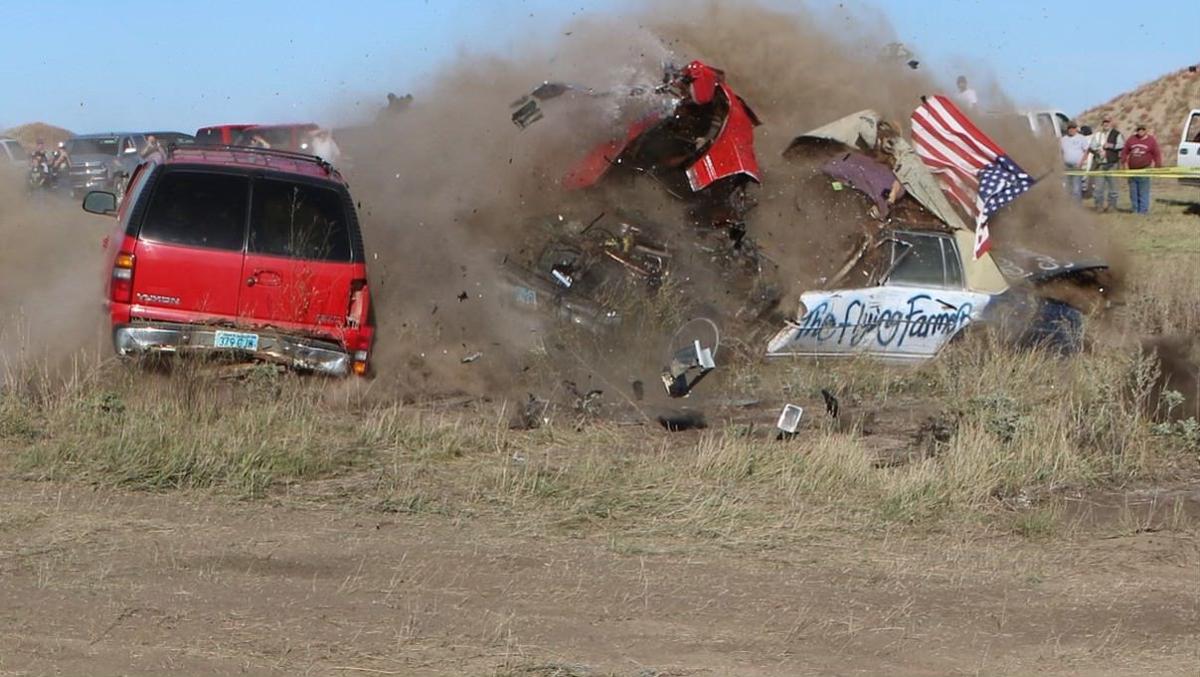 John Smith, the Flying Farmer, crashes his Chevrolet Caprice while attempting a jump on Saturday, Sept. 25. 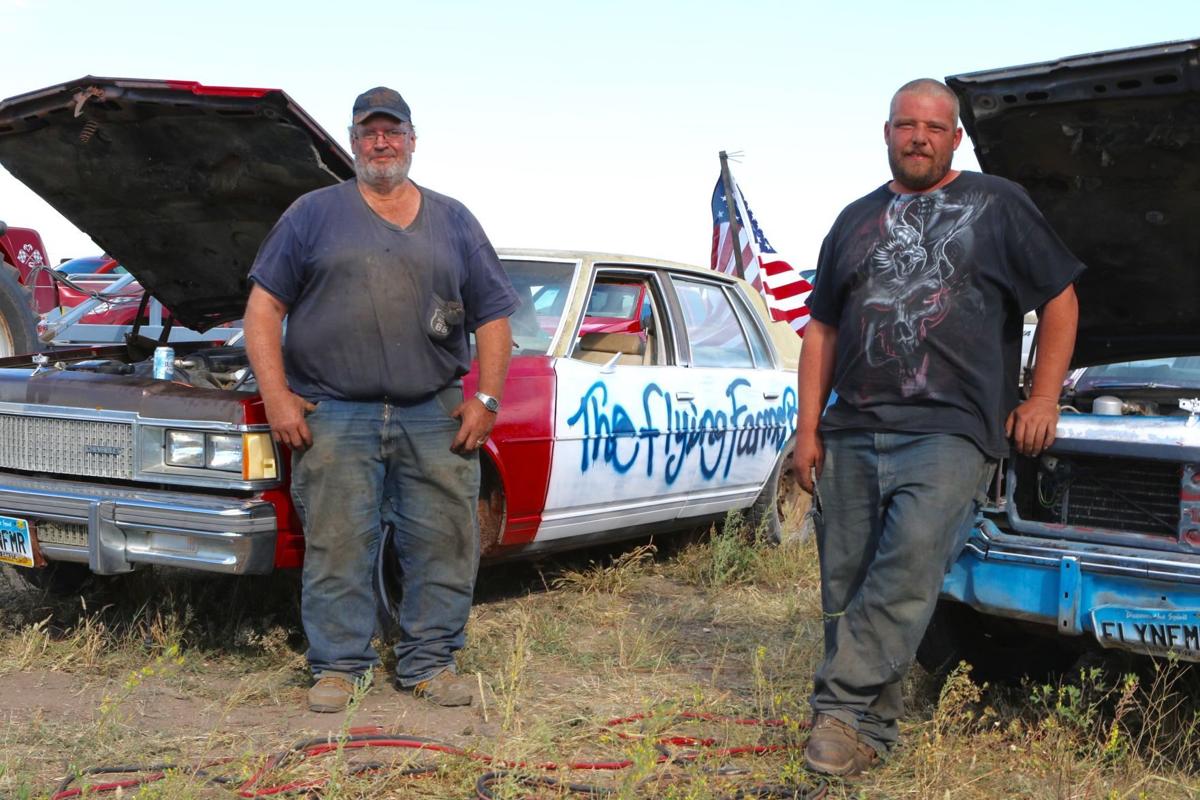 John Smith, the Flying Farmer (left), and his son, Brian. 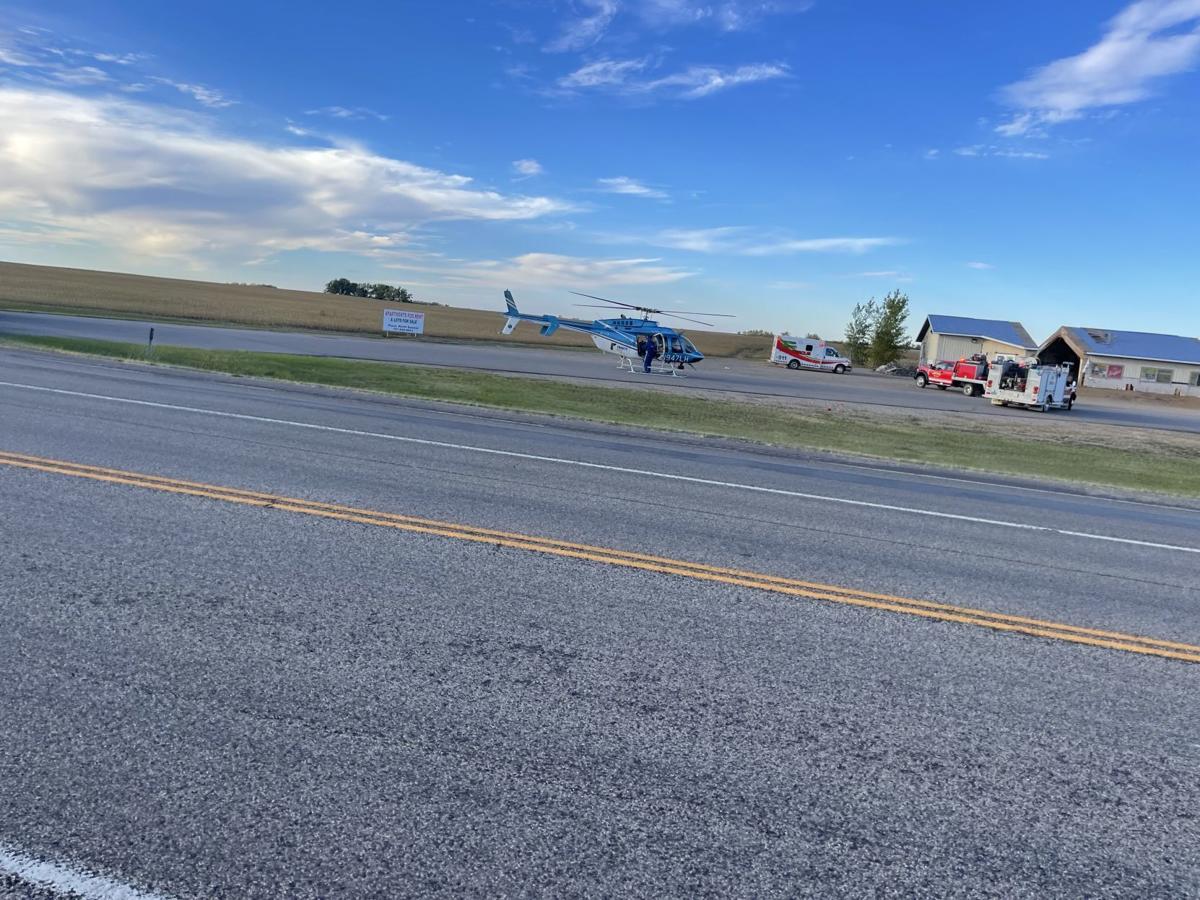 John Smith, the Flying Farmer, was flown to a hospital after crashing during a jump on Saturday. 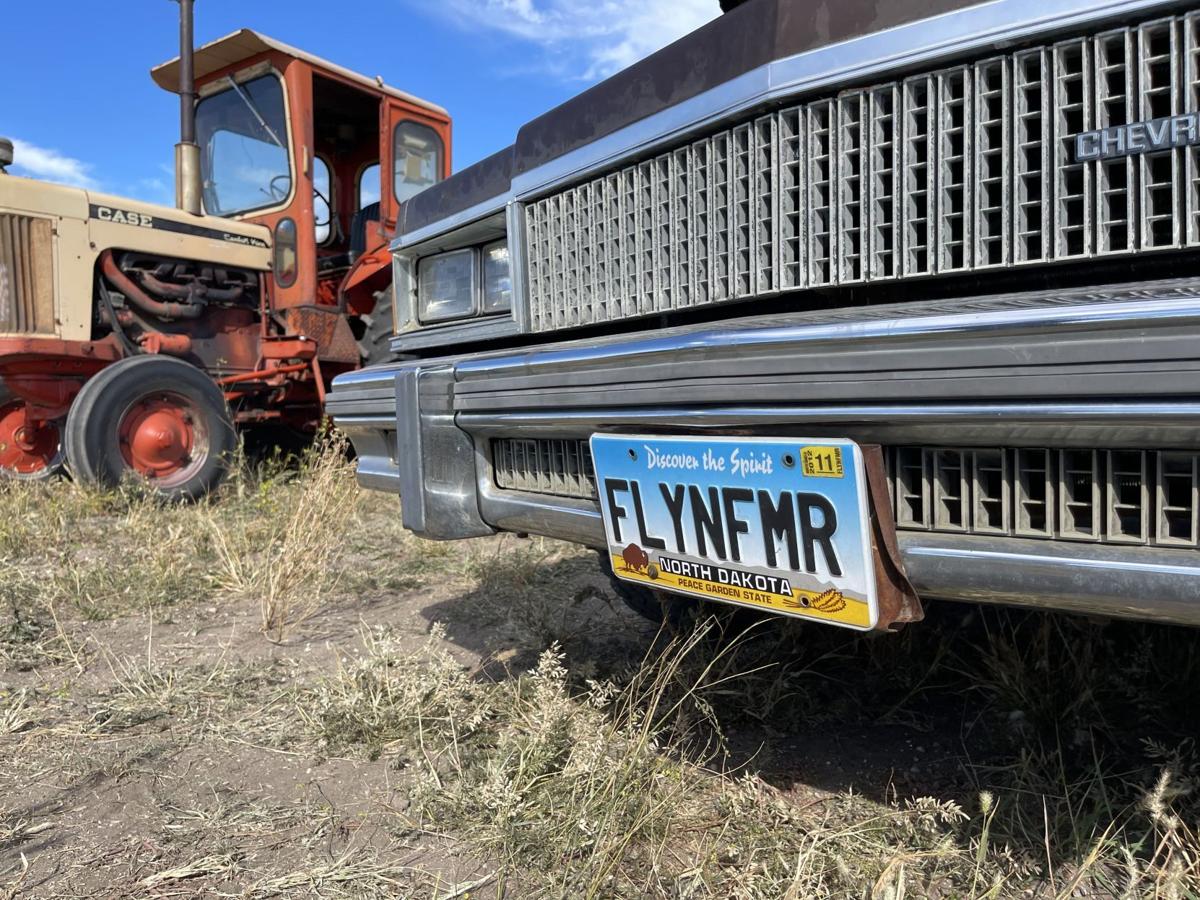 The license plate of John Smith, the Flying Farmer.

HUNTER ANDES For the Tribune

MAKOTI - The first jump by North Dakota's daredevil Flying Farmer in five years ended in disaster Saturday when John Smith corkscrewed off the ramp at a gravel pit northwest of Makoti and his car rolled.

The extent of Smith's injuries weren't immediately known. He was alert after the crash, trying to pull himself out of the car and talking to his rescuers. Emergency responders used the Jaws of Life to cut him out of the car, and a Makoti ambulance took him to meet up with a medical helicopter out of Minot, according to firefighters.

His son, Brian Smith, made a successful jump at the site before the crash, flying about 90 feet in his Chevrolet Caprice coupe and clearing two parked vehicles before safely landing. The crowd cheered with chants of "Flyin' Brian." John Smith, 57, had said earlier in the week that he would have his 36-year-old son go first “out of fairness to the old man.”

Brian said before the jump that he was excited.

"I've wanted to do it for a long time, and Dad's finally letting me -- but Mom doesn't like it," he said.

John Smith has said he was inspired by Evel Knievel while growing up. He has gained notoriety -- almost folk hero status -- for daredevil jumps at fairs and other attractions across the state since the 1990s. He’s made more than 100 jumps -- even jumping on a frozen lake -- and in 2016 sailed 160 feet and cleared a burning trailer house.

That jump -- his last before Saturday -- was the first in 13 years after an injury in 2003, when he crashed into a double stack of old cars during a jump and suffered cracked ribs, a broken nose, an eye injury and internal bleeding.

John also has set a couple of Guinness world records for driving in reverse -- the second time involving his son.

The plan for Saturday's event was for father and son to each jump a car to see who could go the farthest.

John Smith was driving a 1988 Chevrolet Caprice sedan. He had planned to protect himself with a helmet, and a pillow stuffed between his chest and the seat belt. He expected to be going 80 mph when he reached the ramp. He had the pillow but it wasn't immediately clear if he was wearing the helmet.

The crowd of about 300 people who had gathered went silent when Smith crashed. Family members including his wife of 34 years, Melinda, and daughters reacted emotionally, running to the mangled car.

John Smith said before the jump that his son had wanted to jump together, "so I agreed. I just hope he doesn't get hurt.

"I can't believe I'm doing this one," the elder Smith said. "It's soon coming to an end. This will probably be the end of it. Brian can have my nickname and I'll quit. It's time for me to quit."

North Dakota’s Flying Farmer will take to the air Saturday for the first time in several years, and this time he’s being pushed by a new generation.

Flying Farmer out of intensive care, surgery lies ahead

The man whose attempted car jump went afoul on Saturday will need surgery on Monday but hospital officials in Minot have moved him out if intensive care.

The expected hospital release of a Makoti man injured in a recent car jump attempt has been delayed.

Will we be able to harness energy from lightning someday?

John Smith, the Flying Farmer, crashes his Chevrolet Caprice while attempting a jump on Saturday, Sept. 25.

John Smith, the Flying Farmer (left), and his son, Brian.

John Smith, the Flying Farmer, was flown to a hospital after crashing during a jump on Saturday.

The license plate of John Smith, the Flying Farmer.