A $1.1 million project getting underway in western North Dakota seeks to determine whether grazing land can be used to store climate-warming carbon dioxide as a way to mitigate emissions from energy companies.

It will be the first atmospheric carbon study to be completed over managed grazing systems in the state. The North Dakota Industrial Commission in early August awarded the project $500,000 from the Oil and Gas Research Fund. Other funding partners include the North Dakota Natural Resources Trust -- which is leading the project -- the Mercer County Soil Conservation District, the North Dakota Game and Fish Department and the National Fish and Wildlife Foundation.

The project seeks to collect, process and analyze atmospheric carbon data using small meteorological instruments on grazed and ungrazed pastures; report on how rotational, managed grazing can be used as a "carbon sink" -- a term for something that extracts carbon dioxide from the atmosphere and absorbs it; and develop a model that shows how grazing lands can be used to offset carbon emissions for agricultural and energy industries.

"Energy companies could benefit if results demonstrate some of the carbon dioxide emitted in the process of producing energy could be offset by sequestering some of this carbon dioxide in soil," project scientist Rebecca Phillips said. She added that "If ranchers can manage cattle to sequester carbon, then that practice would have value with respect to carbon credits in the private market, future farm policy incentives, and with respect to marketing climate-smart products."

Energy Program Manager Jesse Beckers with the Natural Resources Trust said energy companies in the state would like to know how many tons per acre are being captured on grasslands in a year.

"When energy companies do reclamation work like around their (well) pads, we know the grass growing around that is capturing carbon and that's offsetting some of the impacts. What we don't know is the actual number," he said.

This research project will enable energy companies to determine the amount of carbon captured on rotationally grazed grasslands. However, it’s not clear if the benefit to the energy industry would be as an offset to their emissions -- a carbon credit -- or as a place to physically store emissions in existing and new grazed grasslands, according to Beckers.

North Dakota Petroleum Council President Ron Ness said the project is different than underground carbon capture processes being developed at coal and ethanol plants because it's happening above ground.

"How does an oil and gas operator work with a farmer or rancher to create an opportunity where there's some value in that carbon sequestration in their pastures or fields?" Ness said. "... If the world seems to want this carbon initiative to be a focus, North Dakota should certainly with all its farming and ranching and energy production should be able to find ways to value the grass and the crops that we have growing each year."

Ness said it would be one more tool to reduce carbon emissions in the atmosphere.

"The energy industry is under great pressure to try and reduce emissions and by creating these partnerships, you can have some opportunities to show reduced carbon intensity by partnering with carbon sequestration-type of projects," he said. "And why wouldn't we do it in the areas we've been operating when it's beneficial to both parties? You've got great opportunities in agriculture and ranching in North Dakota that have potential. The great question out there is how do you measure this and how do you validate it?"

The idea began following Gov. Doug Burgum’s unveiling of his 2030 net-zero carbon emissions plan at the 2021 Williston Basin Petroleum Conference. It was approved by the state's Oil and Gas Research Council following a year of planning.

“Carbon is becoming a major economic factor in agriculture,” Phillips said. “Rangelands, worldwide, are one of the best carbon sinks in terms of their capacity for taking carbon and storing it below ground since most of the biomass in a rangeland is below ground.”

The North Dakota Natural Resources Trust has worked with multiple landowners over the past several years on providing cost shares for things such as grazing systems, grass plantings and water developments that seek to improve rotational grazing systems. Beckers, also the carbon capture project manager, said that the idea seemed like a good fit since carbon capture has become more popular in recent years.

“It’s a really good fit for both the energy industry and animal agriculture industry in North Dakota, and having those two work together on our natural resources because they both already do," he said. "This is just going to give both industries a number they can work with in knowing how much carbon is captured."

Phillips, with Ecological Insights Corp., has worked with the Natural Resources Trust for more than a decade on various projects centered mostly on soil carbon, as well as on other projects around the country and in New Zealand.

“This type of work in terms of that measurement technology is something that I’m familiar with. What is less known is how these grazing systems specifically alter the net carbon uptake. Because there’s a lot of different things going on at the same time,” Phillips said. “A lot of studies have looked at individual components of grazing, but we wanted to take a look at this big ecosystem and how doing a managed grazing approach might ... help improve that carbon uptake.”

Phillips and Beckers’ team is working on obtaining the equipment necessary to capture measurements and to identify field sites with optimum conditions. The project will require at least 100 acres. A few landowners have shown interest -- mainly in Burleigh County, Phillips said, adding that the team is hoping to also find a rancher west of the Missouri River.

“It’s always a challenge to do a big field experiment involving animals and large tracts of land and ranchers that are trying to make a living at the same time we’re doing this work,” Phillips said. “But that’s part of why it’s important because we’re not just in an isolated system in a little plot all by ourselves … We’re actually incorporating the rancher, the animals, the grazing systems and all the scientific measurements all together. So it’s a very real-world study under real-world conditions."

The measurements will be collected during the 2023 and 2024 growing seasons.

“Really what we want to do is be able to stratify this information across North Dakota. So we’ll be working with a botanist as well to look at species of grasses and flowers growing on the landscape, taking all this information in, being able to really understand how much carbon’s being captured at different areas across the state,” Beckers said.

Not to sound like a worn-out political slogan, but ... it’s time for a change.

Michael Garcia has been sentenced to seven years in prison and ordered to pay $200,000 in restitution after pleading guilty Thursday to conspiracy charges related to skimming oil.

About 200 people rescued from ice chunk on Minnesota lake

Officials in northern Minnesota say roughly 200 people have been rescued from Upper Red Lake after an ice chunk broke free from shore. The Beltrami County Sheriff's Office says on its Facebook page that the people were ice fishing Monday when the chunk separated. Officials directed the anglers to the southeast edge of the lake known as JR's Corner, where a temporary ice bridge was set up over the open water. Authorities said that everyone had been rescued by mid-afternoon.

North Dakota getting $4.1M through settlement over Google location tracking

North Dakota is getting $4.1 million through a multistate settlement with search giant Google over its location tracking practices.

Another billionaire suggests we revive dinosaurs

Another billionaire suggests we revive dinosaurs 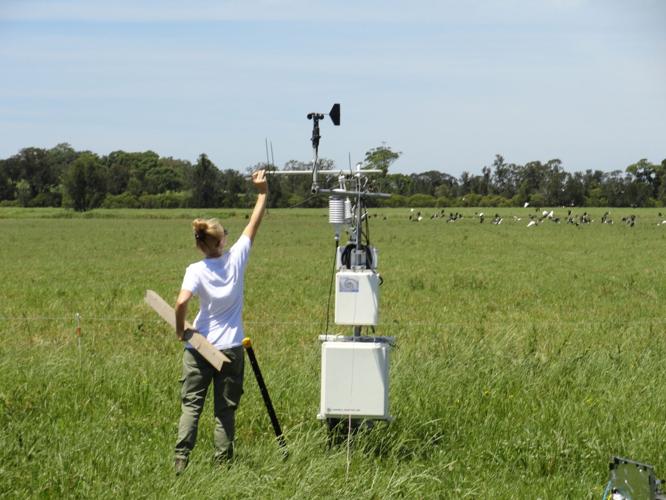 Rebecca Phillips checks an eddy flux instrument at the Manildra Environmental Farm in New South Wales, Australia, as part of a research project seeking to determine how much carbon emissions are captured through managed grazing. She's now heading a similar project in North Dakota. 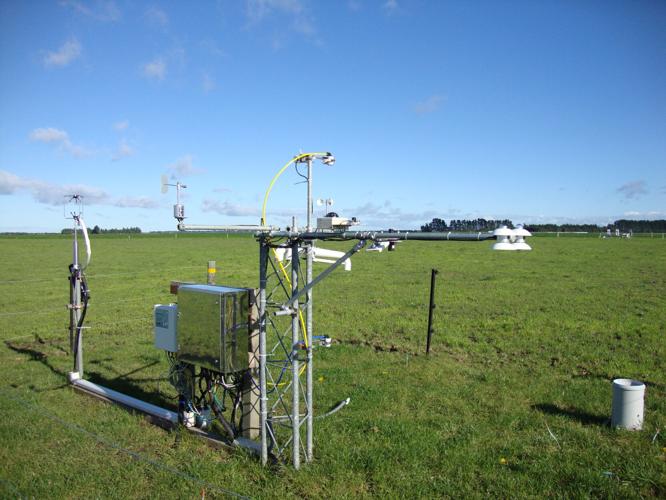 An eddy flux instrument rests at a grazed grassland in New Zealand. Rebecca Phillips, who's heading an agricultural carbon capture research project in North Dakota, worked as the research leader for the managed grazing study in that country.