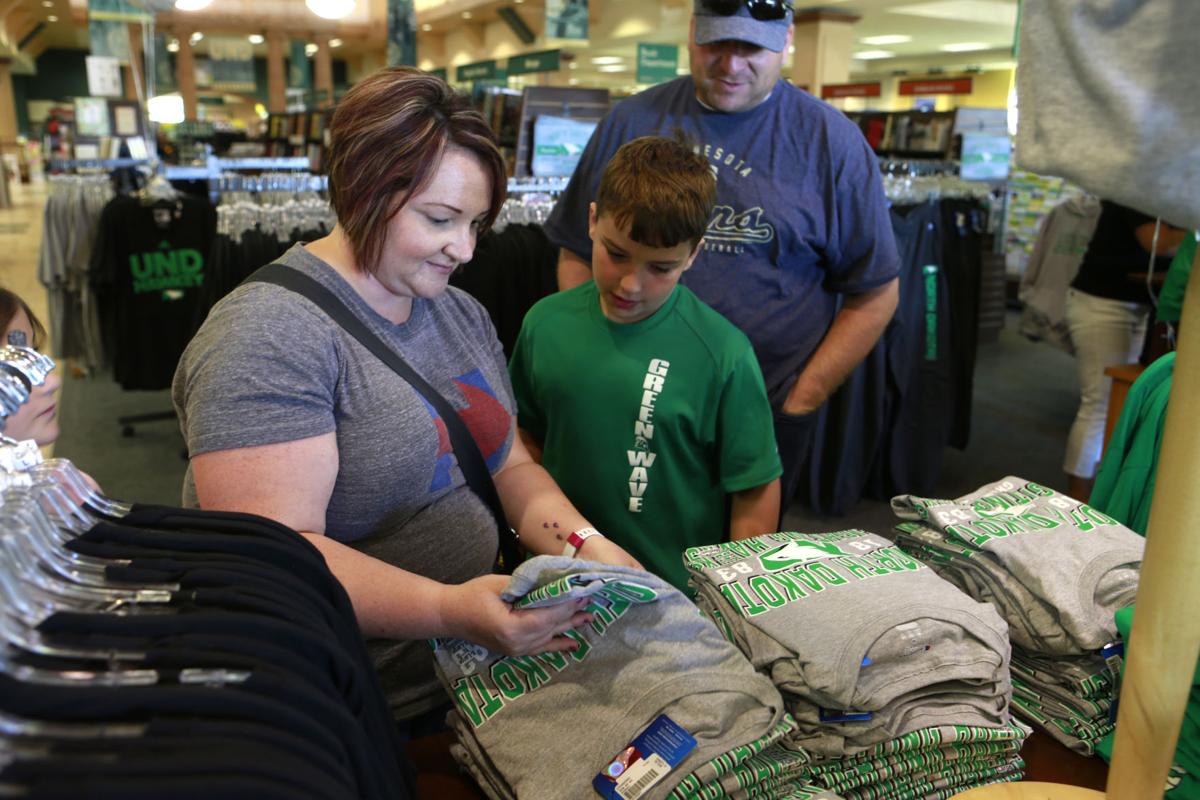 Nikki and Brent Massmann shop with their children, Leah and Luke, for new University of North Dakota Fighting Hawks shirts at Saturday's event at the UND Bookstore in Grand Forks. 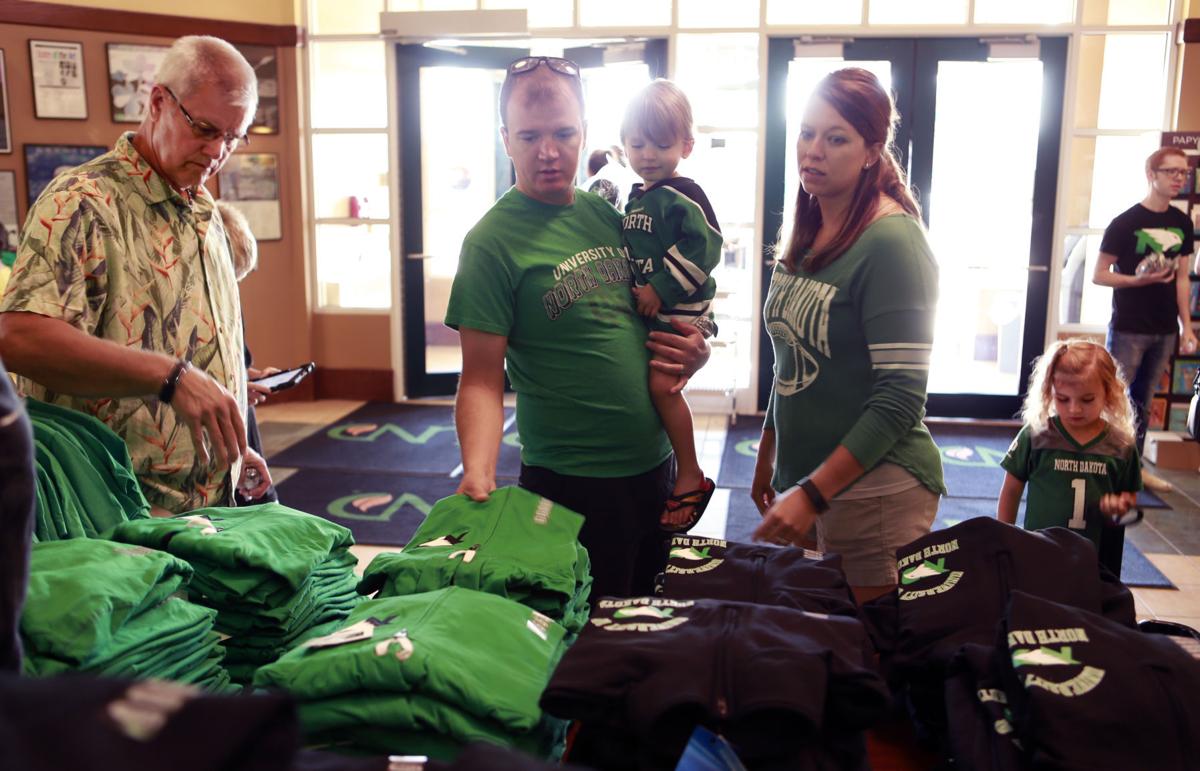 At the UND Bookstore on Saturday, from left, Tim Baumann, Matt and Laura Magnus and their children, Blake and Paige, check out the new Fighting Hawks gear on the first day that the new logo gear is available. 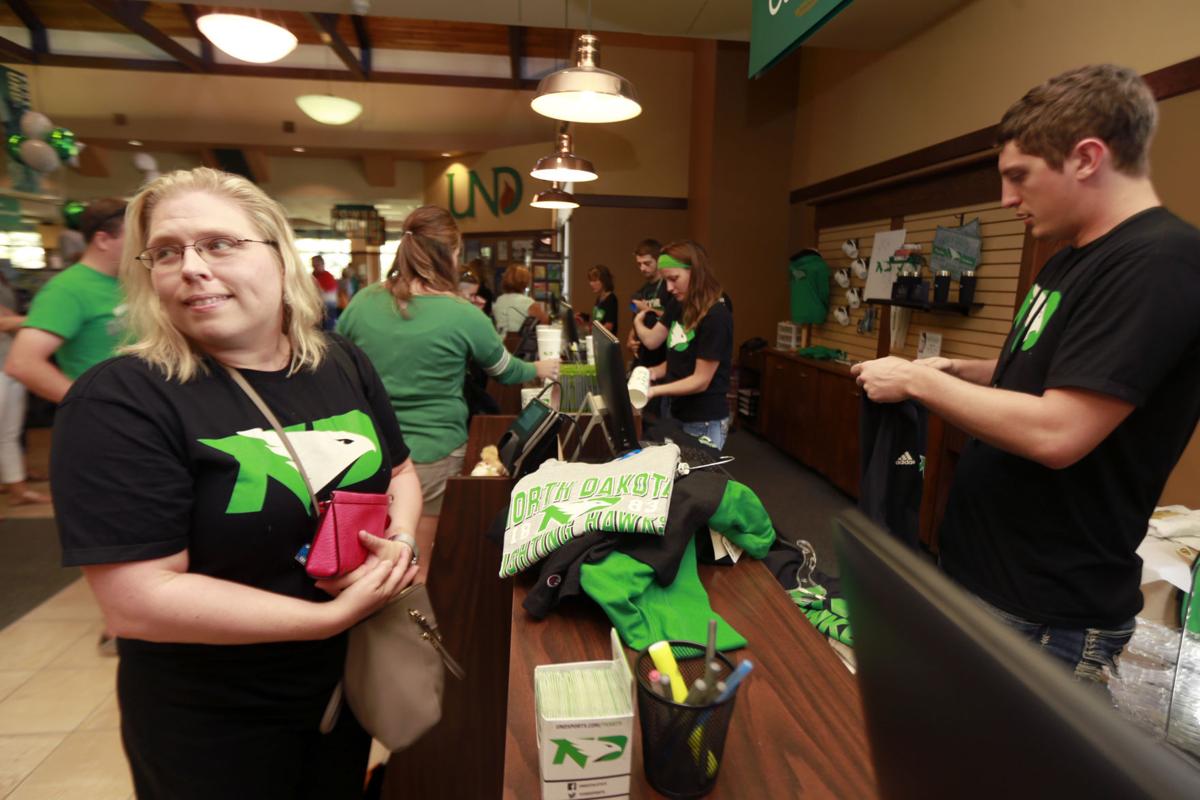 GRAND FORKS -- University of North Dakota student Blair Nelson was more than ready to get his hands on Fighting Hawks gear, but he said it was worth the wait.

“They had some pretty nice stuff,” he said Saturday as he held a shirt featuring UND’s new symbol. “I’m really excited to see what else they come out with going forward.”

Nelson was one of the first to buy Fighting Hawks merchandise at the UND Bookstore, where the school’s official gear bearing the recently chosen logo was available to fans for the first time.

Fans didn’t have to wait long to browse through a variety of apparel, trinkets, glassware and many more items. About 30 people were standing in line as the doors opened at 9 a.m. Saturday, making for a slow start to the merch launch.

Peter Johnson, interim vice president for university and public affairs, attributed that to an early start and predicted more people would come into the store throughout the day.

Bookstore staff spent three days preparing for the launch, from folding and hanging clothes to putting stickers and price tickets on items, store manager Griffin Gillespie said. As soon as the store closed at 6 p.m. Friday, employees worked for three hours to move the merchandise from the back into the store area.

On Saturday, staff members handed out pucks to the first 500 customers as they entered the store while other employees passed out Fighting Hawk face stickers. Tellers waited patiently to ring up items as the store opened but soon became busy as customers made their selections.

Despite the slow start, Gillespie said the opening went smoothly.

“I just hope everyone comes in to check it out,” he said. “We have a wide variety of stuff.”

Fighting Hawks merchandise also was available Saturday at Scheels and the Sioux Shop at Ralph Engelstad Arena, as well as several websites. Most stores that carry UND gear should have it in their shops this week, though others could take several weeks to get the items on the shelves.

The release of the merchandise means fans will have the option to wear the Hawks logo for the first time, though it’s likely not all fans will flock to stores to purchase it.

The nickname was announced in November after the popular Fighting Sioux moniker was retired in 2012. The NCAA threatened sanctions on the university, and after years of debate, a lawsuit and a statewide vote, UND said its athletic teams would no longer be known as the Fighting Sioux.

Several nickname committee meetings and public votes produced the Fighting Hawks nickname in November, though just like the retirement of the Sioux logo, the process of choosing the nickname drew criticism and public outcry after former President Robert Kelley said the public would not be allowed to vote on playing as UND or North Dakota.

Not everyone who shopped Saturday at the bookstore was impressed with the logo. Sandy Flaten of Park River wore a Fighting Sioux shirt as she browsed through the store. When asked what she thought of the merchandise, she said she like everything except the logo.

“It reminds me of the mail carrier,” she said, referring to the U.S. Postal Service logo, a comparison others made to the logo, which was designed by New York-based SME Inc., when it was revealed in late June. “I hope they switch it.”

At first, gaining support for the Fighting Hawks logo was tough, Johnson said, but he believes fans are starting to come around.

“I had one of the first shirts that was released into the wild, if you will,” he said. “When I would wear that around town, people would say, ‘Hey, where can I get that? I want to get one like that.’”

UND student Ross Skillman, who was the first in line Saturday at the bookstore, said he was pumped to buy the Fighting Hawks gear, adding he hopes the logo inspires camaraderie.

“Change is good,” he said. “If you don’t change, then you are eventually going to be crushed by it.”

Fighting Sioux merchandise was visible Saturday in the bookstore, though it was placed toward the back of the store. UND will continued to sell Sioux gear as part of its Dacotah Legacy Collection to retain the trademark.

But the switch is more than just supporting a logo, Johnson said.

“For us, it’s about the athletes and about the athletic programs,” he said. “We think the best way to do that is to show and fly the colors of the new logo and new nickname they are playing under.”

Matt Magnus, a UND football season ticketholder who drove from Fargo with his family to buy Fighting Hawks gear on his way to Devils Lake said he loves the Fighting Sioux logo, but it’s more important to support the athletes.

“You have a lot of students coming in and there is no reason to sit in the stands and boo at 18- or 19-year-old kids,” he said of UND’s student athletes.

Nelson said it’s weird seeing a different logo, admitting the Fighting Sioux moniker was probably more original. But the Hawks logo is starting to grow on him, he said.

He said he understand why some people are hesitant to accept the Fighting Hawks logo, especially with the history and pride behind the Fighting Sioux nickname. However, it’s a matter of respecting the decisions that were made by UND, adding instead of “beating a dead horse,” it’s time to move on.

“It’s only going to be a matter of time before everyone starts to adopt this one,” Nelson said.

WILLISTON — Williston police are investigating a homicide in the city.

Nikki and Brent Massmann shop with their children, Leah and Luke, for new University of North Dakota Fighting Hawks shirts at Saturday's event at the UND Bookstore in Grand Forks.

At the UND Bookstore on Saturday, from left, Tim Baumann, Matt and Laura Magnus and their children, Blake and Paige, check out the new Fighting Hawks gear on the first day that the new logo gear is available.