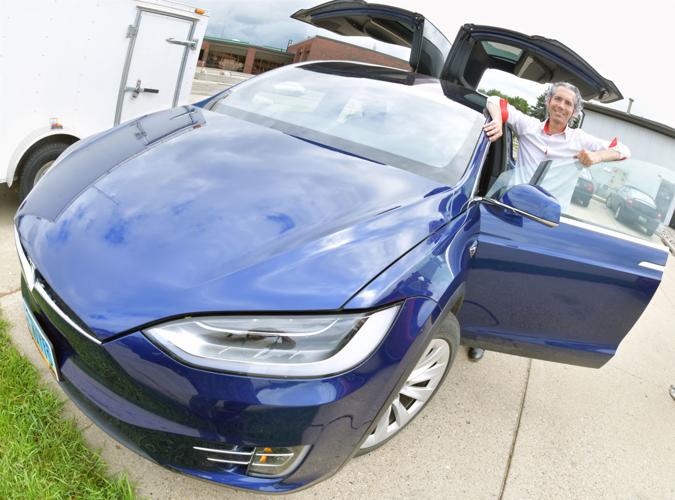 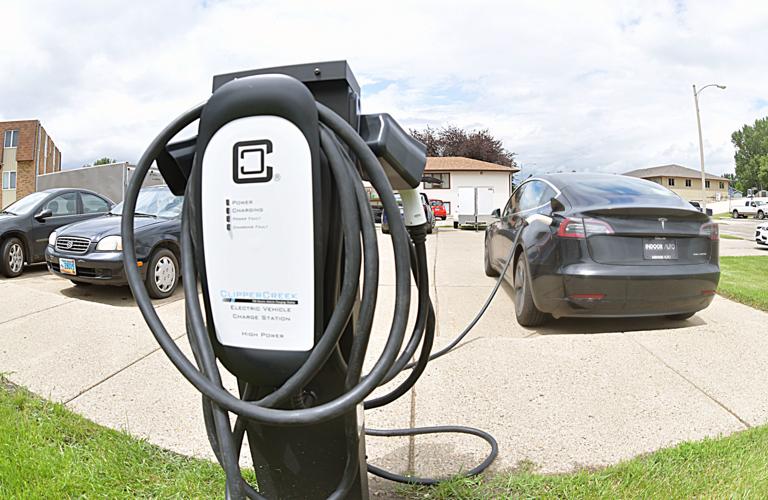 A public charge station for electric vehicles is located in the North Dakota Lignite Council parking lot at 1316 E Owens Ave. in Bismarck.

Step on the accelerator in Capital Electric Cooperative’s new Chevrolet Bolt and it, literally, bolts forward.

“They’re really snappy, quick and fun to drive,” said Energy Services Supervisor Josh Schaffner as he demonstrated on the road next to his office.

The car is one of 141 electric vehicles registered in North Dakota.

While the state ranks near last in the nation for electric vehicle adoption, interest is starting to grow among residents as the cars become more affordable and travel farther on a single charge.

“Having something that could only get you 60 to 70 miles would be good for getting you around town, but it wouldn’t get you to Fargo,” said Robert Moffitt, a clean vehicle advocate who serves as spokesman for the American Lung Association and coordinator of the North Dakota Clean Cities program.

Capital Electric’s Bolt has a range of 240 miles.

The co-op began leasing the car a year ago after hearing from members who were considering buying electric vehicles of their own.

“They’d call and ask us questions about charging options,” Schaffner said. “We wanted to be able to answer questions with firsthand experience on how these cars operate.”

Now the utility sector, coal industry, environmental community and state officials are gearing up for a future with more electric vehicles on the road.

“It’s not going to go away,” said Rep. Dan Ruby, R-Minot, who chaired the House Transportation Committee during the legislative session earlier this year. “It’s something the state should prepare for.”

Building a network of charging stations

While many electric vehicle owners charge up at home, advocates say drivers need confidence that they won’t get stranded if they attempt a cross-state road trip.

“It’s easy to know why electric vehicles haven’t taken off in North Dakota,” said Linda Sitz, strategic innovation manager with the state Department of Transportation. “We don’t have the charging stations.”

The state does have some — 22 in fact — but none are the speedy kind. The closest Level 3 plug-in, which can give a vehicle a nearly full charge within a half-hour, is in Moorhead, Minn.

The existing charging stations in North Dakota are Level 2, which require drivers to plug in their cars for up to 10 hours for full power.

“Casinos, shopping malls, they might want slow chargers because they want people to stay there a little longer,” Sitz said. “But if I’m a visitor to the state of North Dakota, I don’t want to stay eight hours there unless that was part of my vacation plans, so that’s why fast chargers are needed.”

One option to offset the cost is to draw from North Dakota’s share of the 2016 Volkswagen settlement. The auto manufacturer reached a multibillion-dollar agreement with the federal government after regulators found the company had equipped diesel-powered vehicles to cheat on emissions tests.

North Dakota is slated to receive $8 million in settlement money. Its share will go toward efforts to reduce nitrogen oxides, which are found in diesel emissions and can contribute to smog. Up to 15% will be awarded to public and private entities to pay for electric vehicle charging equipment, according to the state Department of Environmental Quality.

He also praised West Fargo Public Schools for purchasing the state’s first all-electric school bus. The larger the diesel vehicle, the more emissions it tends to produce, he said.

“Just taking one diesel bus off the road and replacing it with electric, that makes a big difference,” he said.

Many questions surrounding electric vehicle charging linger in North Dakota, and they will be the focus of a study commissioned by the Legislature. The study came about earlier this year when lawmakers approved annual fees for electric vehicle drivers to help pay for road improvements, which are otherwise funded by the state’s gasoline tax.

State officials will work with stakeholders to examine everything from potential financial incentives for chargers to collecting fees from drivers who use public plugs.

While many drivers swipe their credit cards to fill up with gas at the pump, such a transaction isn’t so simple when it comes to electricity, Sitz said.

The Public Service Commission regulates electricity sales. A restaurant, for example, is not a utility and cannot put in a few electric vehicle plugs and start charging by the kilowatt-hour.

Alternatively, charging station owners could decide to let people plug in their vehicles for free.

“What most places do is charge by the minute,” said Jason Bohrer, president and CEO of the Lignite Energy Council. “You’re not actually selling electricity. You’re selling a parking space.”

The trade group, which represents the state’s coal industry, sees electric vehicles as a way to boost the demand for electricity.

Two-thirds of the power generated in North Dakota last year came from coal, with about one-quarter from wind turbines, according to the U.S. Energy Information Administration.

Bohrer knows that with so few electric vehicles on the road in North Dakota right now, cars have a miniscule impact on the electric grid. But that will change one day, he said.

“We need to use the next two to three to five years to implement policies that will allow for the benefits of electric vehicles to be experienced by the widest number of North Dakotans,” he said. “We really need to be forward looking in this.”

The utility sector is working on its own policies.

Power companies have to figure out how to handle the hours when demand for electricity peaks. Those times often occur in the evening when people drive home from work, turn on the lights, blast their air conditioning and use electric appliances.

“They’re all going to be plugging their cars in from 4 to 8 p.m.,” Capital Electric’s Schaffner said.

Earlier this year, the co-op started offering an off-peak charging rate for electric cars. Capital Electric will install a controller at a member’s house to stop a vehicle that’s plugged in from charging during those peak hours. In exchange, the co-op member receives a discount on their electricity.

While North Dakota irons out its electric vehicle policies, those who drive the cars here are learning a lot about how they operate.

There’s a lot to like, including cheap maintenance costs and cool features such as the “falcon wing” doors on the Tesla Model X that Bohrer recently leased. They open like the doors of the DeLorean in “Back to the Future.”

Bohrer said the Tesla handled icy conditions this past winter as well as a sport utility vehicle, but bitterly cold temperatures do pose a problem for North Dakota drivers when it comes to battery life.

Just as frigid air rapidly drains the battery in cellphones held outside a jacket pocket, it also sucks down the charge in electric vehicles.

Schaffner has noticed that while driving the Chevrolet Bolt, and Bohrer says the same is true of the Tesla.

Sitting in his Bismarck office with the Tesla parked in back on a recent July day, Bohrer looked out the window to the warm, sunny weather.

“Today, I could drive that from here to Fargo,” he said.

When it’s 20 below, he’s not sure he could make it to Steele.

North Dakota could soon see more electric vehicle charging stations, as well as cleaner buses and trucks on the roads now that the public can …

Tesla “Superchargers” have come online in four North Dakota cities, helping Tesla drivers cross the state without fear of running out of power.

Biden's Mission In Europe: Shore Up Alliance Against Russia

A public charge station for electric vehicles is located in the North Dakota Lignite Council parking lot at 1316 E Owens Ave. in Bismarck.