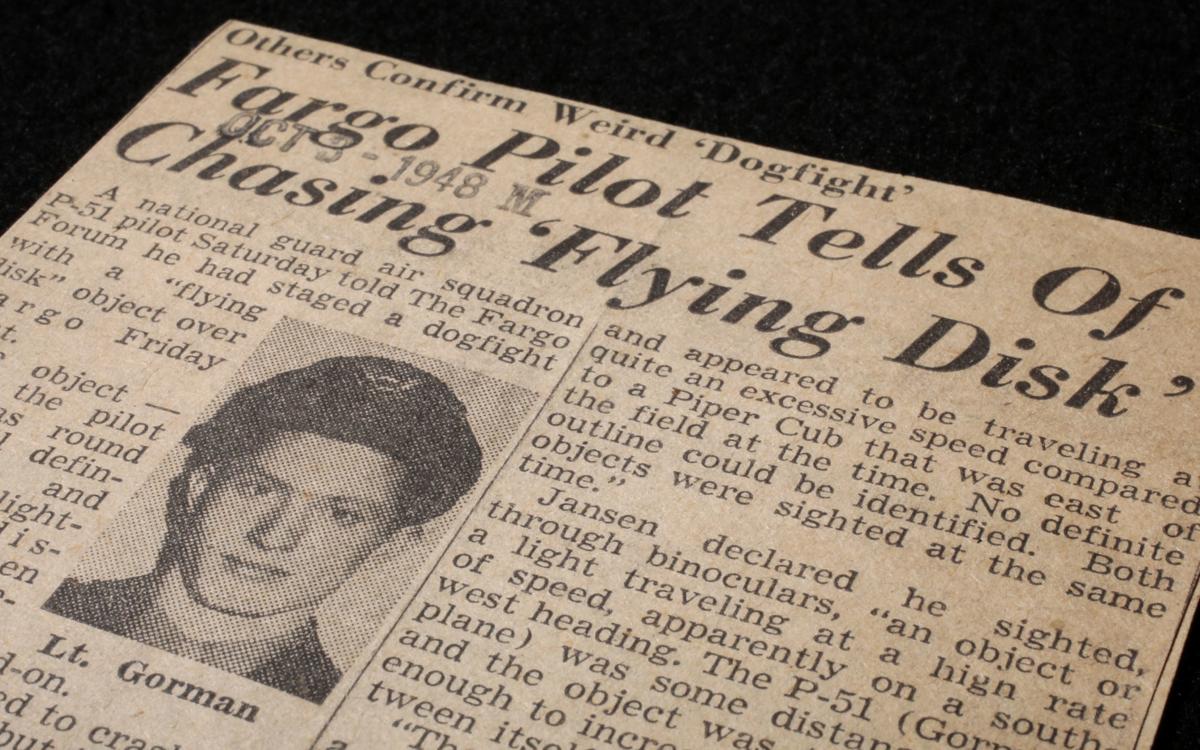 A new History Channel show about UFOs featured this National Guard pilot’s 1948 encounter above Fargo in its first episode.

Forum article from Oct. 3, 1948, on Lt. George Gorman recalling his dogfight with a 'flying disk.'

The first episode of "Project Blue Book" premiered Tuesday. It focuses on a then-25-year-old National Guard lieutenant's encounter with an unidentified flying object in the skies above Fargo in the 1940s.

The lieutenant, George Gorman, a B-25 fighter pilot in World War II, told The Forum of Fargo-Moorhead in October 1948 that the "dogfight" with the UFO was "the weirdest experience I've had in my life."

According to the archived Forum article:

Flying in a P-51 over what is now North Dakota State University during a football game, Gorman saw the "flying disk." It was round with well-defined edges, brilliantly lit and circling over the city.

After Gorman decided to investigate the disk, a 27-minute chase ensued in the Fargo night sky.

Gorman tried crashing into it, but the disk dodged him at speeds of 600 mph, he recalled. His aircraft was going at a top speed of 400 mph, and as he approached the disk, it lit up and, with a burst of speed, outdistanced him.

"Once, when the object was coming head on, I held my plane pointed right at it," Gorman said. "The object came so close that I involuntarily ducked my head because I thought a crash was inevitable. But the object zoomed over my head."

His story was corroborated by another pilot flying in Fargo that night and two air traffic controllers who Gorman relayed information to regarding the disk's antics.

Maj. D. C. Jones, commander of the 178th fighter squadron at Hector International Airport, said Gorman was so shaken by the experience that Gorman had difficulty landing that night.

The U.S. conducted Project Blue Book between 1947 and 1969 to determine if UFOs were a national security threat. Documents on the project are now declassified and can be viewed online.

There were more than 12,500 sightings reported to Project Blue Book, according to the National Archives. Investigations found no evidence that UFOs were "extraterrestrial vehicles" or a security threat.

In looking through a collection of UFO news clippings from 1947 to 1995 at The Forum of Fargo-Moorhead, such sightings back then were a dime a dozen.

"A flurry of reports of unidentified flying objects were made in North Dakota," says an article from August 1965. Sifting through the newspaper clippings, reports revealed UFO sightings from Perham and Long Prairie, Minn., to Upham and Minto, N.D.

Countless columns aimed to disprove the sightings, claiming that "flying saucers aren't for real," said one article from August 1963. A March 1950 article tried to downplay the UFO hype, saying UFOs aren't anything new and that, in fact, sightings here date back to 1897.

But still the Fargo-Moorhead area welcomed "ufologists" for lectures over the years, and officials investigated reports made by children, adults and law enforcement alike.

As for Gorman, he carried out his career in the Guard quietly, never again speaking publicly about his UFO experience. He even denied Life magazine an interview in 1952, according to a 2011 Bismarck Tribune column.

The History Channel reports that Air Force investigators arrived in Fargo after the incident and ultimately ruled it an encounter with a weather balloon. Investigators noted that Gorman was a credible, sincere witness "who was considerably puzzled by his experience and made no attempt to blow his story up."

Gorman told friends that "he was never convinced that he had been dueling with a lighted balloon for 27 minutes," according to the Tribune.

Learn more about the television series at www.history.com.

US Sen. Cramer apologizes for offensive term about Pelosi

Gov. Kristi Noem said Tuesday that South Dakota may be as much as eight weeks away from the peak of the COVID-19 crisis and needs to limit business activity, even as President Donald Trump considers relaxing national guidance.

MINNEAPOLIS — Gov. Tim Walz on Wednesday ordered Minnesota residents in nonessential jobs to stay at home for two weeks in an effort to slow t…

FARGO — North Dakota Gov. Doug Burgum has been in daily contact with lawmakers about the coronavirus and hasn’t ruled out the possibility of c…

SIOUX FALLS, S.D. — As South Dakota grappled with the reality that COVID-19 is spreading throughout the state, the city of Huron emerged as th…

A new History Channel show about UFOs featured this National Guard pilot’s 1948 encounter above Fargo in its first episode.

Forum article from Oct. 3, 1948, on Lt. George Gorman recalling his dogfight with a 'flying disk.'