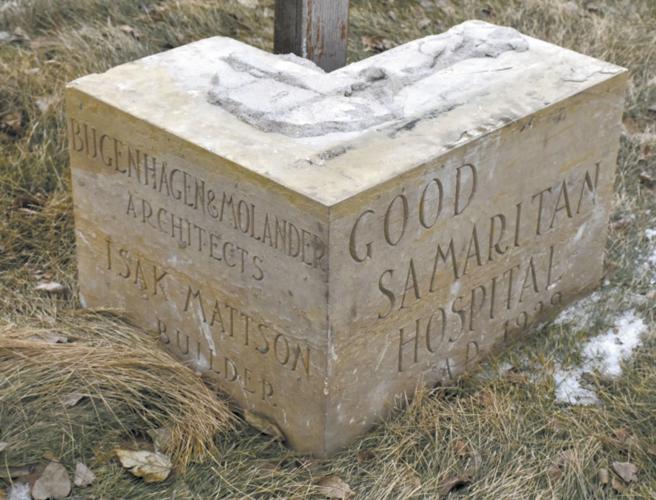 The cornerstone for the Good Samaritan Hospital, laid on June 15, 1929. 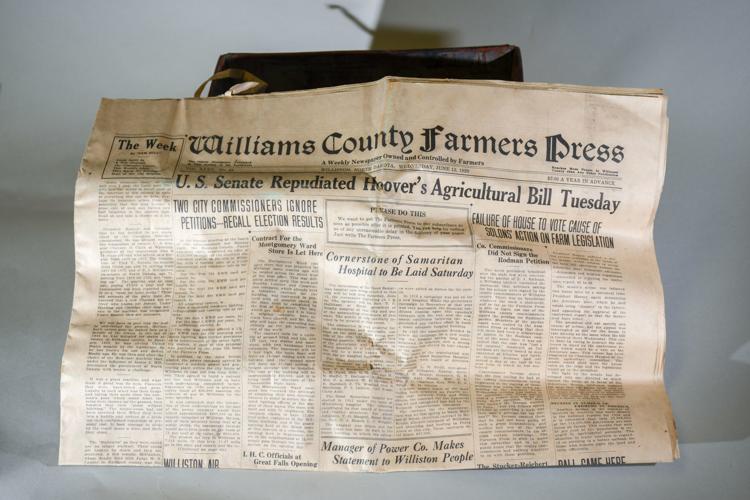 Among the items in the Good Samaritan time capsule were copies of the Williston Herald and the Williams County Farmers Press announcing the cornerstone laying ceremony.

The cornerstone was laid on June 15, 1929, as part of the construction of Good Samaritan Hospital. The hospital replaced Wittenberg Hospital, which was established in 1912. Crews from National Civil carefully removed the cornerstone during the demolition, thinking it may be of historic value.

Workers found a compartment on the underside that contained a sealed metal box holding historical documents, including an invitation to the cornerstone’s laying ceremony. The invitation came from the Good Samaritan’s building committee chairman and the city’s postmaster.

Underneath, four pages folded together tell the story of how Good Samaritan came to be, and its need to replace Wittenberg Hospital, which was struggling to serve the community’s needs.

“The hospital was begun and for many years has done its work in a frame building, to which two cottages were added, for nurses home,” the typewritten document reads. “In 1916 a campaign was put on for a new hospital. While the preliminary campaign in Nov. of that year was very successful, the financial conditions the following year, ensuing upon our entrance into the war, and the following economic conditions following the war precluded any further effort to build a more adequate building. In 1927, the Association decided to renew the campaign for a new building, the hospital having long since outgrown its quarters.”

The capsule also contained amended articles of incorporation for The Good Samaritan Hospital, dated April 18, 1929, which were typed over the amended articles of incorporation for Wittenberg Hospital, dated March 3, 1926. The box also included the abstract of title of the hospital, telling a history of the property dating to 1894.
A copy of the Williams County Farmers Press from Wednesday, June 12, 1929, and the Williston Herald from Thursday, June 13, 1929, both tell of the cornerstone’s ceremony on their front page, as well as a few other historical tidbits including details on a band day parade and a stop by The Great Northern Railroad’s “Empire Builder.”
Another time capsule that had been included in a hospital addition built in 1955 also was found but not until crews had brought down the wall, unintentionally damaging most of the materials.

City Administrator David Tuan said the time capsule contents were turned over to the city attorney for review, to see if there were documents the city needed for its records or that should be returned to the property owner. None of the documents had any legal value.

“It’s pretty fascinating,” Tuan said. “It plays a lot of similarities with what’s going on in the community right now, with the need for health care, growth of the town, limited funds. It was very interesting to know that history with the hospital before Mercy (Hospital) came along.”

The city donated the time capsule, its contents and the original building cornerstones to the James Memorial Preservation Society, where they will be displayed at the James Memorial Art Center in collaboration with the Williston Community Library, which will share them as part of its History Room.
0 Comments

A North Dakota state senator who is resigning following a report about text messages he exchanged with an inmate ran up travel expenses the past decade that are more than 14 times what lawmakers bill state taxpayers on average. Travel records reviewed by The Associated Press show Republican Ray Holmberg has made taxpayer-funded trips to four dozen U.S. cities, China, Canada and several countries in Europe. He was reimbursed about $126,000 for nearly 70 trips — all out of state — over the past decade. Holmberg, who became one of the state’s most powerful lawmakers in a career that spanned 46 years, announced this month that he would resign June 1 following a report that he had traded scores of text messages with a man jailed on child pornography charges.

Bobcat Company has announced plans for a new assembly plant in Minnesota. The West Fargo-based manufacturer of farm and construction equipment says it expects the plant in the Twin Cities suburb of Rogers will be fully operational by the fourth quarter. Bobcat will hire more than 100 people for the new plant, the company’s third location in Minnesota. It also has a manufacturing facility in Litchfield, where it recently invested in a $26 million expansion, and an office in downtown Minneapolis. Bobcat said it will initially concentrate on hiring material handlers, assemblers and warehouse associates for both first and second shifts.

"Dusty" Tim Drake, who performed last fall in a Medora Johnny Cash show, will replace "Cowboy" Chet Wollan as a cohost of the Medora Musical. Wollan cited vocal issues in stepping aside.

North Dakota officials have given an initial thumbs up to loan requests for two carbon capture projects, and they suggest regulators consider …

A man facing a possible life sentence on federal drug and money laundering charges has won the lottery in South Dakota. KELO-TV reports 45-year-old Canbie Thompson was featured on the state lottery’s website for winning $40,000 on a scratch-off ticket. Thompson earlier pleaded guilty to the charges which resulted from a larger Minnehaha County drug bust involving 11 pounds of methamphetamine and seven other defendants. According to court documents, when police pulled Thompson over last year, they found drugs in his car. He also admitted he was involved in a money-laundering scheme to hide drug money.

Gov. Doug Burgum appears to be gearing up for another election season of big spending, according to recent campaign finance disclosures.

The cornerstone for the Good Samaritan Hospital, laid on June 15, 1929.

Among the items in the Good Samaritan time capsule were copies of the Williston Herald and the Williams County Farmers Press announcing the cornerstone laying ceremony.