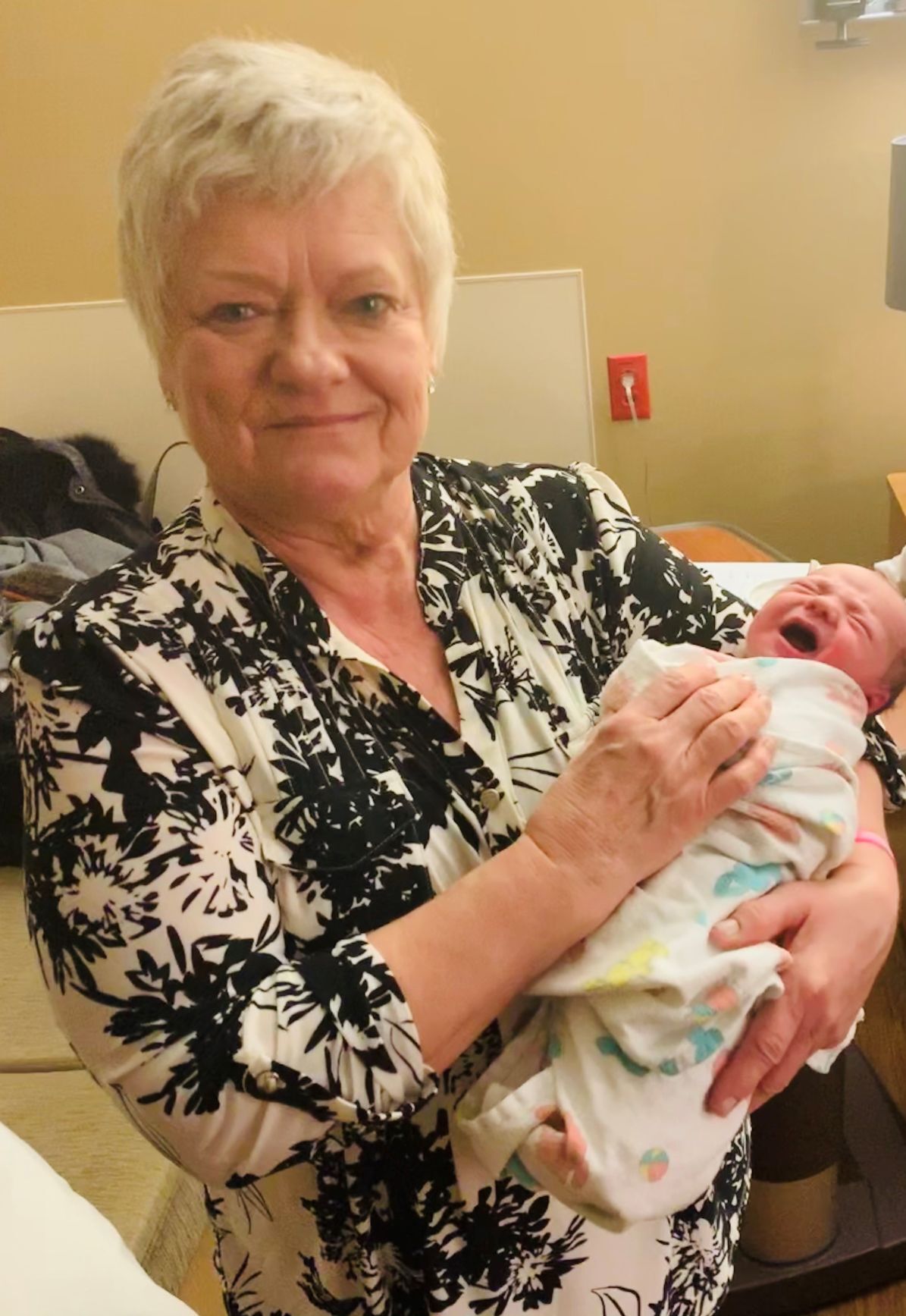 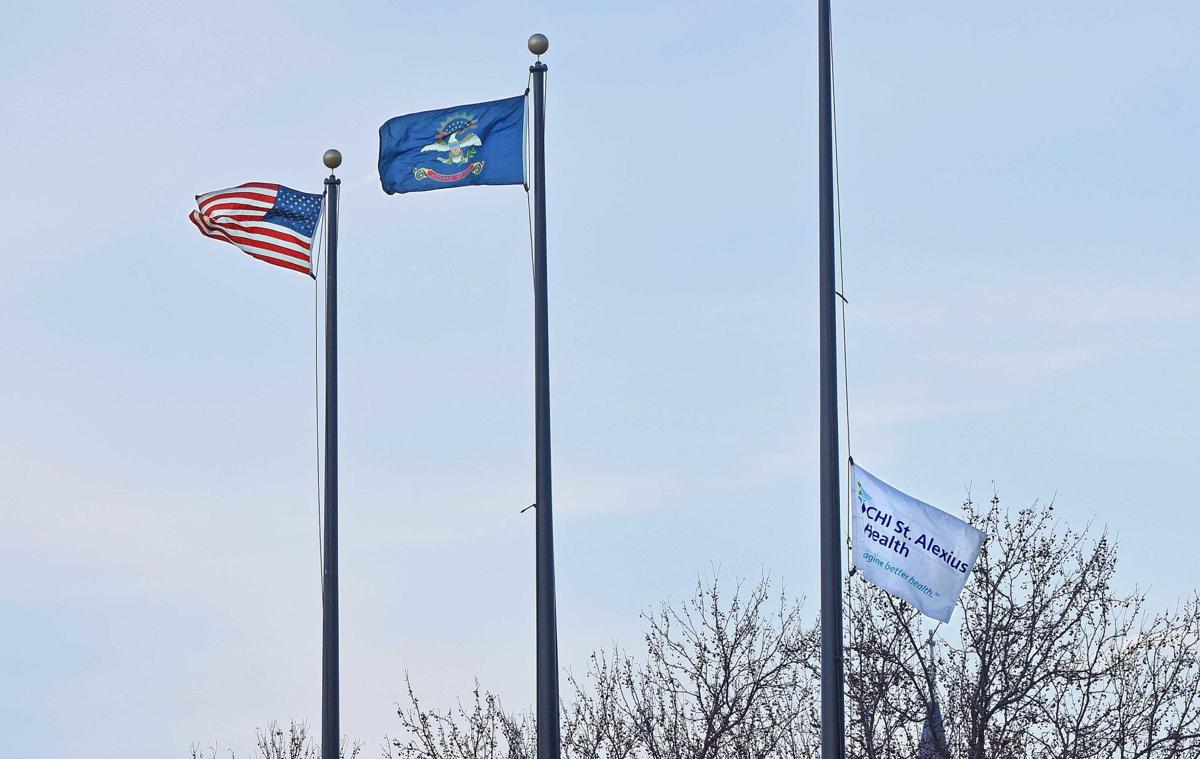 CHI St. Alexius Health in Bismarck flew its flag at half-staff on Dec. 22 in memory of Greta Rasmussen, who worked at the hospital for 44 years. She died Dec. 2 of COVID-19.

Greta Rasmussen tried on dresses for her daughter's wedding in December 2017. Her hair had just started growing back after chemotherapy treatment for breast cancer.

Greta Rasmussen will be remembered as the type of person you wanted around in many situations.

If you were her grandchild, she was the grandmother who would entertain you, feed you snacks, spoil you.

If you came for supper, she was the hostess who invited extra guests and prepared more food than you could imagine.

If you were a child about to go into surgery, she was the nurse who would sing to you.

If you were her husband or children, she cared for you and about you and calmly settled differences.

Greta beat breast cancer a couple of years ago, had some minor back issues and high blood pressure. Still, she was in pretty good health before she became ill with COVID-19.

She was exposed to the virus by an Oct. 19 visitor. She started feeling symptoms a few days later and entered the hospital on Nov. 1. Her condition deteriorated, and she was put on a ventilator on Nov. 6, the same day she was flown to Abbott Northwestern Hospital in Minneapolis. She began improving Nov. 21, her 69th birthday, and doctors removed the breathing tube a week later.

“She did OK. The doctor said it was survivable,” her daughter Krystal Shoch said. “But that evening she started to decline.”

Greta was delirious, agitated, and her vital signs were dropping. Krystal at 10 p.m. started talking to her by cellphone speaker in an effort to calm her. The call ended a few hours later when respiratory specialists again placed Greta on a ventilator.

“After that she just didn’t come back,” Krystal said.

The family met and prayed several times. Greta was unresponsive and could no longer breathe on her own. She was placed on comfort care Dec. 2. She died that day, half an hour after she was disconnected from the machines that had kept her alive.

Roger and the grandkids

Greta was given paralytics -- drugs that kept her from fighting the breathing tube -- while she was on the ventilator. The last chance for Roger Rasmussen, her husband of 44 years, to speak to her was in early November, a month before she died.

The two met in 1972 when a mutual friend introduced them. Greta was chasing a nursing degree at what was then Mary College, the first step in a long-since decided career path.

“We kinda noticed each other,” Roger said. “It took a few weeks and then we started dating.”

They married in 1976 and made their home in Bismarck. Their children -- son Branden Rasmussen and daughter Krystal -- live in Bismarck, and Roger and Greta’s cabin at Lake Tschida was a favorite family spot and the perfect place for Greta to be grandma. Her time with her grandchildren included lots of little things, such as extra snacks and staying up too late.

“All the things mom wouldn’t let them,” Krystal said.

“We loved to have them out there. That was one of her biggest joys,” he said.

Her grandchildren weren’t the only kids to feel her touch through the years. She started at what is now CHI St. Alexius Health even before she graduated and worked there until her retirement four years ago. She spent 38 of her 44 years at the hospital as an operating room nurse. She was known to sing to children as they were going to sleep, and instead of wheeling recovering children back to their rooms, she’d often pick them up and carry them, according to co-worker and registered nurse Tracy Wegner.

“Away they’d go with a hug and a warm blanket,” she said.

Greta helped train Wegner into her job and the two became friends and “pretty much like partners,” the nurse said.

“We just worked well together,” she said. “We knew what needed to be done. We’d go to do something and the other person was there doing it.”

Her skills with patients didn’t stop with jokes and hugs, according to Jane Schmaltz, a registered nurse and director of the surgery department. She said Greta handled her share of on-call shifts and was good under pressure, and “you wanted her in your room when a trauma came in.”

Greta often was the circulating nurse for Dr. Mike Goebel, a pediatric surgeon who for the last 34 years spent one day a week at CHI St. Alexius to rebuild little people’s mouths. He said Greta was an old-school nurse -- one who “started nursing with a hat on” -- was organized and took pride in being one step ahead of everyone.

“She worked hard to please the doctor and the patients,” he said. “That’s hard to do.”

Her favorite stories, of course, were about the family lake cabin and her grandkids. The stories always brought a laugh.

“And she had a guffaw,” the doctor said. “She really let it go.”

The hospital on Dec. 22 flew its flag at half-staff to honor Greta’s dedication.

The Rasmussen family is dealing with the loss about as well as can be expected, Roger said. The staff at Abbott Northwestern were “very helpful,” he said, doing what they could to let family members spend the day with Greta on Dec. 1.

“Everybody held together,” he said.

Krystal said she still has "a lot of bad days." She and her mother were close and spoke on the phone several times a day. Only two people could be with Greta when she died. Roger and Branden were there. Krystal could be there only by video call.

At Christmas this year Greta likely would have cooked a big meal, made sure her family helped her decorate cookies and invited as many people as possible. That won't happen now, and "it doesn't feel right," Krystal said.

“She loved entertaining. She was happy to have a lot of people, and she loved to make other people happy,” Krystal said.

STORIES BEHIND THE STATS

About 1,300 North Dakotans died in 2020 with COVID-19. The Bismarck Tribune is featuring stories from the lives of five area residents behind those statistics. This is the third in a five-part series.

Suspects sought after chase and search in national park

Authorities are seeking two suspects after a chase and search in Theodore Roosevelt National Park.

Ruling in Dakota Access Pipeline dispute favors Standing Rock, but fight not over

An appeals court has largely sided with the Standing Rock Sioux Tribe in its fight against the Dakota Access Pipeline, upholding a judge's decision requiring a new review and revoking a key permit.

Biden halts oil and gas leases on US land, water for 60 days

BILLINGS, Mont. — The Biden administration announced Thursday the suspension of new oil and gas leasing and drilling permits for U.S. lands an…

The North Dakota Senate on Friday shifted gears and advanced a bill aimed at allowing extra-long trucks on Interstate 94.

U.S. Rep. Kelly Armstrong, R-ND, is calling for an investigation into the treatment of the National Guard at the U.S. Capitol

CHI St. Alexius Health in Bismarck flew its flag at half-staff on Dec. 22 in memory of Greta Rasmussen, who worked at the hospital for 44 years. She died Dec. 2 of COVID-19.

Greta Rasmussen tried on dresses for her daughter's wedding in December 2017. Her hair had just started growing back after chemotherapy treatment for breast cancer.