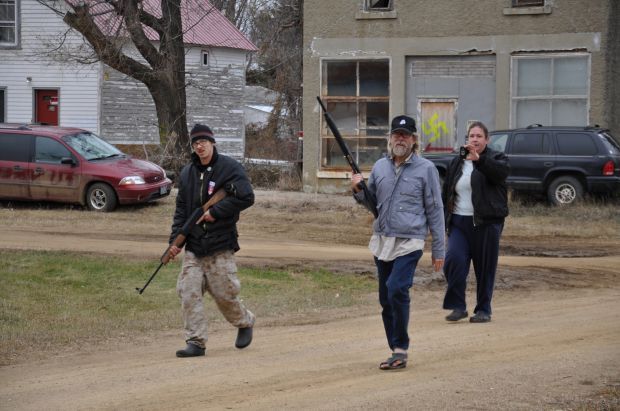 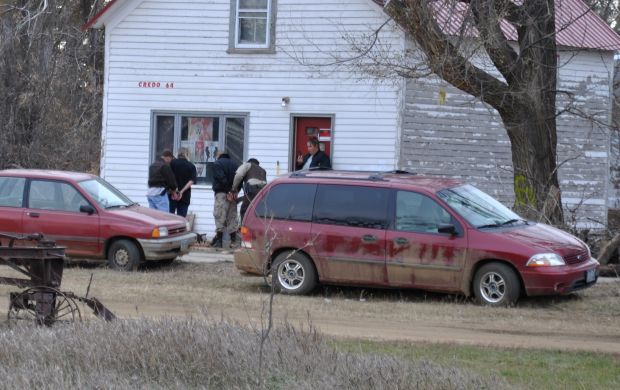 Grant County Sheriff's Department deputies handcuffed both Craig Cobb, left, and Kynan Dutton Saturday and took them into custody at the Mercer County Jail in Stanton. Deborah Dutton is also pictured, filming the incident on her cellphone. No charges had been filed as of late Saturday afternoon.

LEITH, N.D. - Craig Cobb and Kynan Dutton were taken to jail in handcuffs Saturday afternoon, after Leith citizens called 911 for help because the two men were confronting them with guns in a threatening and intimidating manner.

The two men are neo-Nazis and moved in take over Leith's government, posting new signs with ugly racial slurs and flying swastika flags on Cobb's property in town.

Their use of guns with Leith residents raises three months of tension to its highest level yet, and Grant County Sheriff Steve Bay said residents should feel at ease at least for now that the men are in custody at the Mercer County jail in Stanton.

The sheriff said because it's the weekend it could take time for the paperwork, but he's assembling evidence for three separate charges of terrorizing against Cobb, 62, and Dutton, 29.

Dutton is already on bond for a charge of disorderly conduct for drunken behavior in Leith and further charges could violate his bond conditions.

Bay said Dutton's rifle and Cobb's shotgun had not been confiscated and he planned to attempt to recover them from Cobb's residence later Saturday.

Deborah Dutton remained at Cobb's house with five children, ages 4 through teens. She accompanied the men around town, but carried a cell phone to record the interactions, not a weapon.

She said she had nothing to say when contacted by the Tribune.

In a text message to the Tribune before he was taken into custody, Cobb said, "Because of the many violences (sic) and harassments against we (sic) and the children, we have commenced armed patrols of Leith." In a follow up text, Cobb said he has new plans to name some of his property the "Adolph Hitler Pvt. Park of Leith."

The sheriff said he knew that "sooner or later" the situation would escalate and said he's relieved that no shots were fired.

Leith City Councilman Lee Cook was involved in one of the incidents Saturday. He said he and Gregory Bruce had just arrived at Cook's home when Cobb and Dutton came over with guns and stood at the edge of his property. Cobb lives across the gravel street.

He said Dutton had his finger on the rifle trigger, but said the guns weren't aimed directly at them.

Both Cook and Bruce, who's been posting updates about the neo-Nazi activities on a Leithnd.com website, called 911. Bruce took photographs of Cobb and Dutton and submitted them for publication with this story.

Another Leith resident, Miller Ferrie, told Cook that Cobb and Dutton, both carrying guns, followed her to her house Saturday afternoon. She told Cook she was in hysterics when she called 911 because her husband came outside and words were being exchanged.

For safety reasons, Cook moved his family out of Leith weeks ago. He said he was in town to install security cameras on his home.

Cook said he doesn't think Leith is peaceful, even with the two men in jail.

He said Cobb was cocky and arrogant when he approached with the gun.

"He thought he was something. He thinks he owns this town," Cook said.

He said his reaction to the men being in custody is bittersweet.

"They deserve more than what they get. I know it's not over. Cobb is obviously desperate," Cook said.

Cobb is a hate crimes fugitive from Canada with a long history of association with hate groups and white separatist believers. He purchased 13 properties in Leith and plans to take over the town government with other neo-Nazis.

Grant County Sheriff's Department deputies handcuffed both Craig Cobb, left, and Kynan Dutton Saturday and took them into custody at the Mercer County Jail in Stanton. Deborah Dutton is also pictured, filming the incident on her cellphone. No charges had been filed as of late Saturday afternoon.