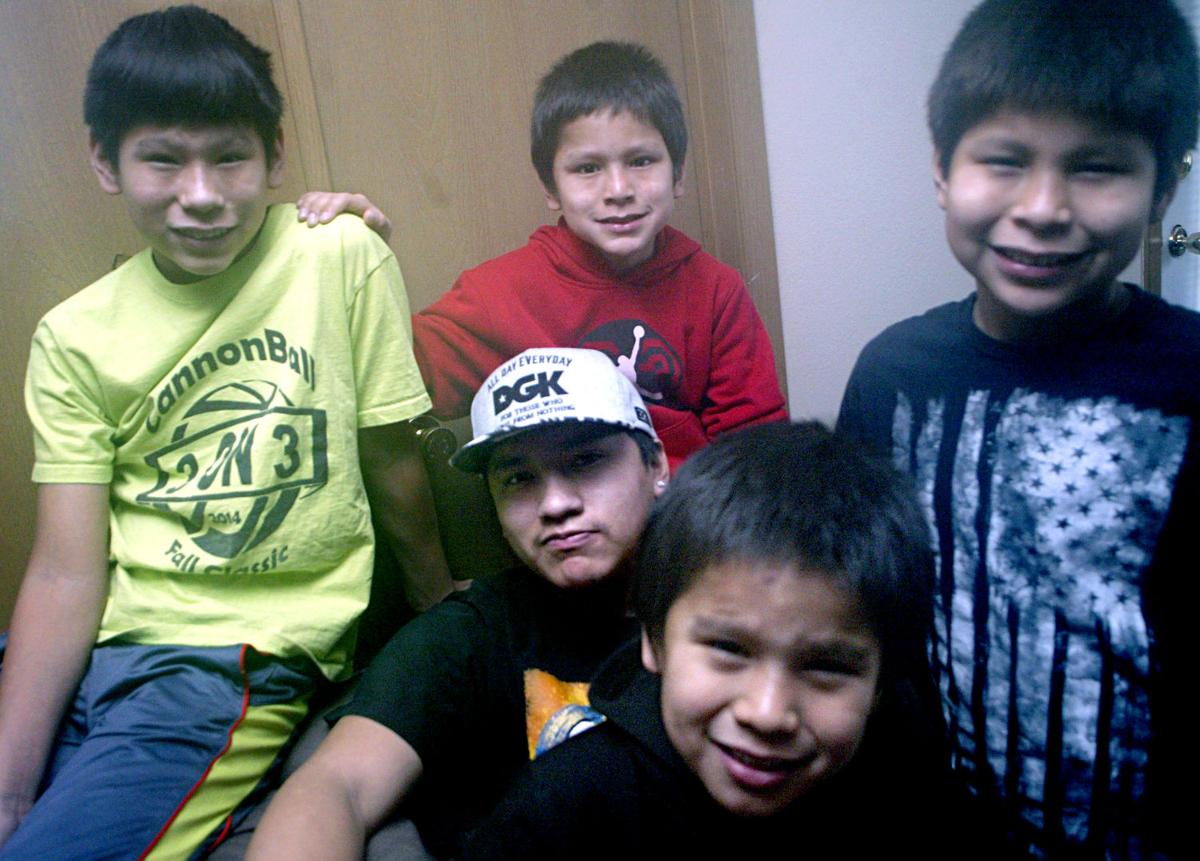 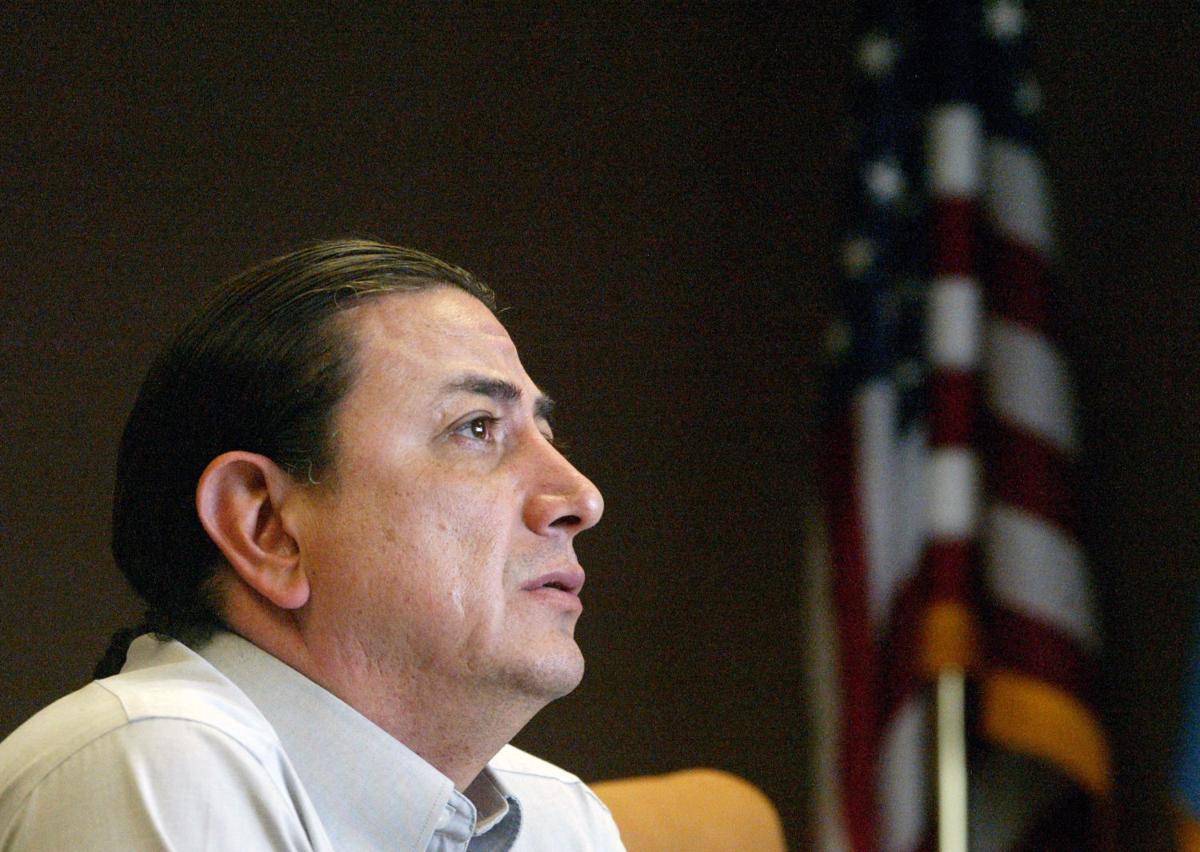 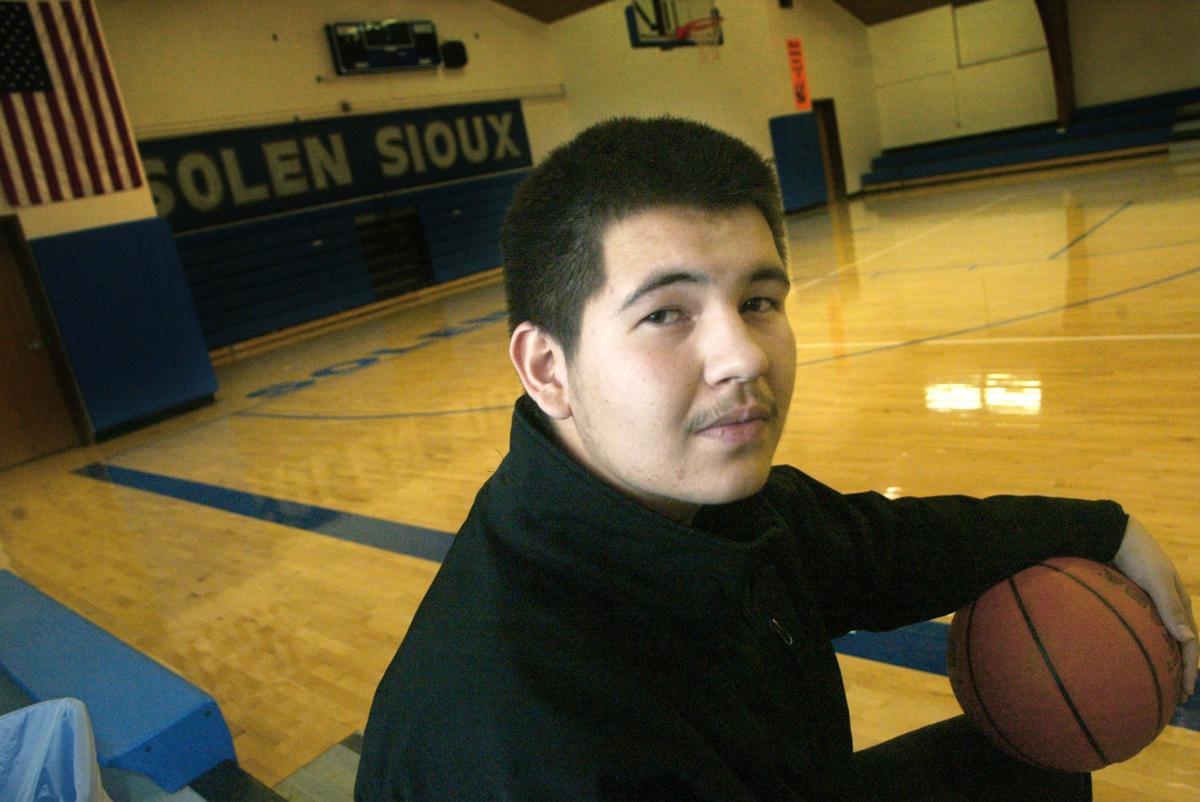 MIKE McCLEARY/Tribune Solen High School sophomore Felix Lester attended a conference in November, where he spoke with advisers to President Obama in Washington, D.C. Felix was chosen by his high school principal and basketball coach Jeff Brandt to go on the trip for his leadership qualities. 12-17-2014 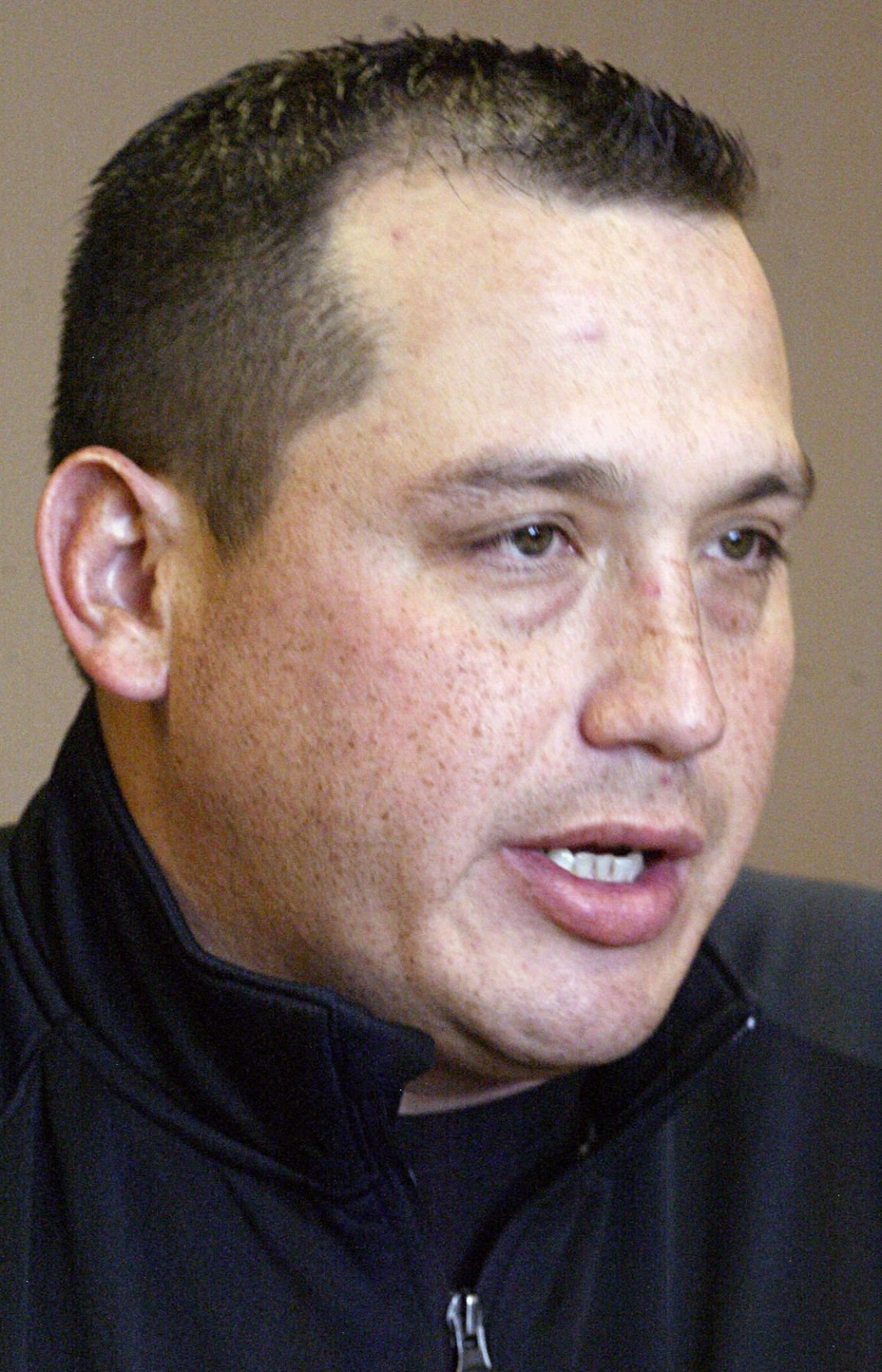 STANDING ROCK SIOUX RESERVATION — Gathered inside a school on the northern edge of the Standing Rock Sioux Reservation, six young adults kept President Barack Obama well beyond the 30 minutes allotted for their conversation.

Kendrick Eagle spoke about how he — at 21 years of age — ended up single-handedly raising his four younger brothers while attending college.

When his father died several years back, his stepmother turned to alcohol and drugs. His younger siblings remained under her care while he moved to Bismarck for school and later to Washington state.

He didn’t stay away long.

“I kept getting texts and calls from people in my hometown,” he said.

His brothers’ home situation had gotten out of hand. People were abusing his siblings. His brothers — one as young as 5 — wandered around Cannon Ball at midnight looking for their mother.

Eagle grew worried and decided to return. His little brother developed kidney disease and had to go to the hospital in Bismarck. His stepmom became sick as well, landing in the same hospital a few floors above his brother, where she died.

With no parents left to look after them, Eagle assumed primary custody of his brothers. He saved up to buy a car, and he stopped going out with friends so he could care for his siblings at home.

Fast forward six months from when Eagle met the president to a room in the Capital Hilton hotel in Washington, D.C., earlier this month. Tribal leaders from across the nation watched Obama walk to a podium, where he told a story about the day he cried in the Oval Office after visiting Standing Rock.

“One young man was raising his four little brothers by himself,” Obama said. “All of them knew somebody that they loved who had attempted suicide, committed suicide, died in a car accident, before their time. Some of them had spent time living in a bus.”

The president continued, describing how he called together top administration officials after returning from Standing Rock to discuss education and job training for Native American youth.

“I deal with a lot of bad stuff in this job,” he said. “It is not very often where I get choked up, so they knew I was serious about this.”

Obama then announced a series of actions his administration would take — release a report on challenges facing Native American youth, send Cabinet members to visit reservations, launch a project to support schools, create a national network to cultivate Native leaders and host an annual conference for youth.

“I can’t think of another administration more willing to put attention toward Indian Country,” he said.

He quickly points to two settlements that took place under Obama’s watch. Combined, the Keepseagle v. Vilsack and Cobell v. Salazar settlements are slated to provide more than $3 billion to Native Americans.

One of them directly pertains to Archambault’s tribe. The lead plaintiff in the Keepseagle case, a man from the Standing Rock reservation, sued the U.S. Department of Agriculture over loans denied to Native American farmers.

“That was a case that was ongoing for close to 15 years and no movement was on it,” Archambault said. “When the president came in, he went to make a lot of these discriminatory acts against Native Americans right.”

The tribe submitted 20 names of teenagers and young adults to the White House, along with stories about their experiences on the reservation. Six were chosen to sit down with Obama.

They met privately with the president and many sat near him while he addressed tribal members and attended a powwow. Eagle said Obama listened like a parent, interacting with himself and the five other youth.

“He and Michelle gave me a big old hug and told me I was strong,” he said.

Eagle and the others doubted they would ever see the president again, though Obama had said he would invite them to Washington one day.

“Adults say things to them all the time and never follow through,” Archambault said.

In November, the president made good on his promise. Eagle and 17 other young tribal members left the reservation for the nation’s capital.

They arrived at the White House and got a tour of the West Wing and residence, where they saw on display in the East Room the quilt tribal leaders had presented the Obamas when they came to the reservation in June. The president even welcomed the visitors into the Oval Office.

The group rode in the motorcade to a pizza joint. Obama chatted with the young Standing Rock members while munching on pepperoni, said several people who attended the event.

While in Washington, the group met with government officials and attended events and attractions throughout the city.

They met up with another tribal member, Felix Lester, who was in town attending a conference put on by the Substance Abuse and Mental Health Services Administration. The Solen High School sophomore has friends who stopped going to school and abuse drugs and alcohol.

“The main thing I talked about was I wanted to see change on the reservation,” Lester said. “I want to see more students go to school that dropped out. I want to see people get better grades.”

The students who attended the conference broke into small groups to discuss their experiences and brainstorm ideas before presenting them to government officials.

“I wasn’t the only one who talked like that and had the same feeling,” Lester said.

He would like to see a youth center in his community — maybe a boys’ and girls’ club next to the school where students can participate in extracurricular activities or do homework.

Alana Cosay, one of the 18 from Standing Rock who went on the trip, said she wanted the president to know that schools need to get creative to keep kids interested. The 14-year-old said she would like to see more group activities and field trips.

Her goal aligns with Archambault’s vision. He said schools that receive money from the Bureau of Indian Education do not have enough flexibility in determining how they educate kids. Archambault offers the example of standardized testing, which promotes an environment where students are bombarded with information and then tested to see how much they have learned.

“It doesn’t work, especially for Native American kids because we are used to learning with our five senses,”he said. “Not everyone learns the same.”

Some students will fail time after time because they learn differently, he said.

“What I like to see and what the tribes should be working toward is self-directed learning,” he said. “There are other ways to get the students to explore and be interested in education rather than sitting them down and listening to a lecture or stuffing information into them.”

He points to Montessori schools as an alternative, where teachers serve as facilitators for students as they do hands-on activities and learn from their peers.

During his visit to North Dakota, Obama announced an overhaul of the Bureau of Indian Education, which oversees 183 tribal schools, including several on the Standing Rock reservation.

“They are going to put a lot of control of education of our children back into tribal hands,” said Steve Sitting Bear, external affairs director for the Standing Rock Sioux Tribe. “We know how we learn.”

Rather than embed pieces of culture in schools, he would like to see education revolve around culture. It’s not currently a priority, he said.

Archambault said some on the reservation are skeptical that the president’s visit will lead to meaningful improvement.

“Because there have been so many broken promises and mistrust between Indian nations and the United States, it’s hard to believe that change will come,” he said. “It’s more like we’ll believe it when we see it but I know that our youth believe in it.”

Eagle does. Between meeting the president — twice — and his conversations in Washington, he knows bureaucrats are listening.

“Something is moving out there in D.C.,” he said.

That trip sparked something inside him as well. He’s determined to return to Cannon Ball as an architect, so he’s studying engineering technology and business management at Bismarck State College. He hopes to build businesses on the reservation to promote job creation.

“That’s what makes me want to move back home,” he said. “I want to try to help youth and spread positive vibes.”

He knows he too can have an impact on kids — just like Obama has done for him.

Watch Now: Can you transmit COVID after vaccination?

Watch Now: Can you transmit COVID after vaccination?

MIKE McCLEARY/Tribune Solen High School sophomore Felix Lester attended a conference in November, where he spoke with advisers to President Obama in Washington, D.C. Felix was chosen by his high school principal and basketball coach Jeff Brandt to go on the trip for his leadership qualities. 12-17-2014