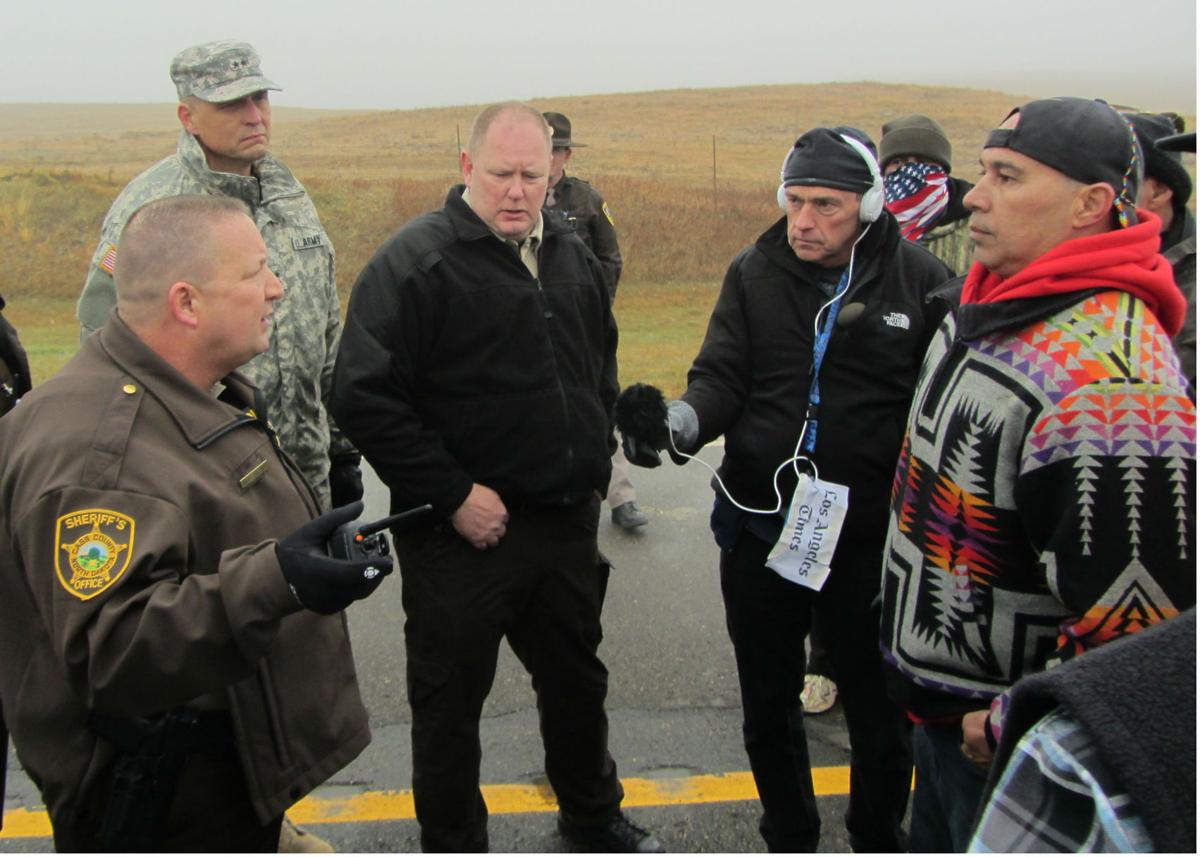 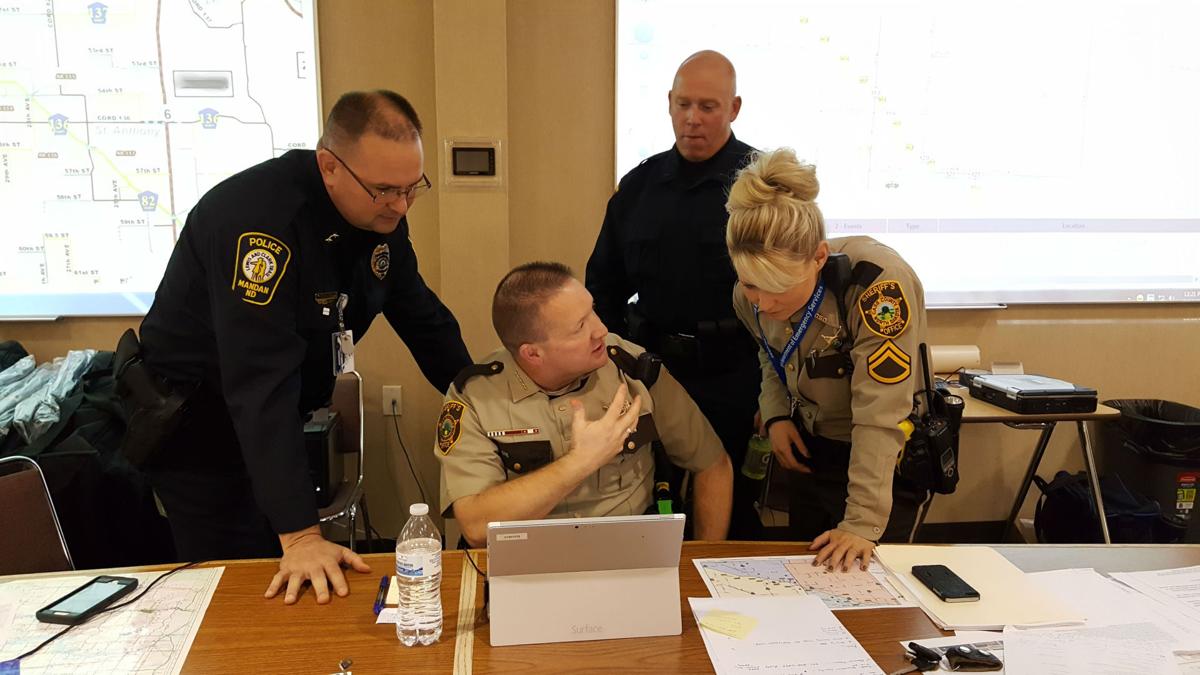 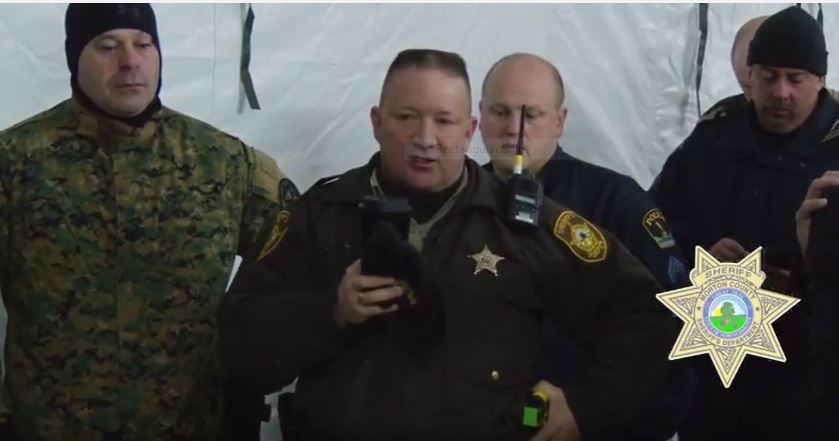 Paul Laney, Cass County sheriff, saying law enforcers will back away from a contested bridge to de-escalate tensions over the Dakota Access Pipeline protests.

FARGO -- Paul Laney’s phone rang on a Saturday while he was relaxing as he watched televised coverage of the summer Olympics. Little did the Cass County sheriff know that his professional life was about to be upended.

The call was from a fellow sheriff asking for help in dealing with the protests against the Dakota Access Pipeline in Morton County, just north of the Standing Rock Sioux Reservation.

After he arrived two days later, Laney would spend the next 4½ months confronting a massive influx of protesters trying to halt the $3.8 billion crude oil pipeline from crossing Lake Oahe on the Missouri River just upstream from the reservation.

Laney expected the altercation would last, at most, two weeks and he and his deputies would soon be back home. Instead, the pipeline’s contested river crossing would draw waves of protesters from around the nation, including hundreds of tribes, attracting worldwide attention.

“It’s like it became the mecca for every eco-terrorist, I call them, every eco-person out there,” he said in an interview with The Forum Editorial Board last week. “It was like 140 years of perceived Native American oppression came together there.”

In almost three decades in law enforcement, as a Fargo police officer and as sheriff, Laney has faced armed standoffs, the fiery oil train derailment near Casselton and potentially devastating floods.

But he called his prolonged involvement along the protest barricades -- including a “surreal” Thanksgiving night huddled near concertina wire -- the most intense experience of his career, “by far.”

He prayed every night that nobody would be hurt. Once, on the eve of what he predicted would be an especially confrontational day, when officers would try to move back the protest line, he got up in the middle of the night and knelt beside his motel room bed and prayed.

“I had protest dreams every night I was there,” said Laney. “It was tense, it was scary.”

Because of his experience and training in incident response command, Laney quickly emerged as one of the leading, and most visible, law enforcement officers on the scene. It was not a role that he sought, but Laney said he felt a sense of obligation to stick with the job.

Quite simply, he said, the 33-member Morton County Sheriff’s Department was being overwhelmed by sprawling protests that quickly mushroomed to include thousands of protesters.

“How do we sit back and watch the sheriff’s office and the cities of Bismarck-Mandan get overrun?” Laney said. “We had to help, just like they helped us in the flood.”

Laney said he and his fellow officers were routinely thanked by Bismarck-Mandan residents who were grateful for their assistance.

Once home, Laney said the vast majority of his Cass County constituents supported the active role he and his office took in the protest response. The most notable exception, he said, was a talk radio host who criticized his role.

Echoing earlier comments by former Gov. Jack Dalrymple, Laney said that, despite criticism from protesters and sympathizers, and portrayals on social media, he believes officers acted with restraint in dealing with sometimes belligerent protesters.

Although most of the demonstrators were “peaceful and prayerful,” Laney said a sizeable number were bent on provoking police, forcing them to wear helmets with faceguards and to sometimes intervene physically.

Laney was frustrated by a private security firm, hired by the pipeline company, that used guard dogs to protect the construction site. The dogs, which were not licensed in North Dakota, bit several protesters.

The decision to use dogs, he said, was “dumb” and damaged the image of police officers, whom he said were trying to provide public safety. “That changed the whole thing,” Laney added, making the police come across as “jack-booted thugs.”

It was frustrating to be accused of being the security force for the pipeline company, Laney said.

“All we were trying to do was enforce the rule of law,” he said, by arresting those who were trespassing or committing other crimes, including rioting.

But a leading activist involved in the pipeline protests maintains that police were not restrained, acted provocatively and fired rubber bullets, beanbag charges and used stun grenades -- allegations Laney and other law enforcement officials deny.

“The police themselves have defiled sacred land,” said Joye Braun, an organizer with the Indigenous Environmental Network. “They are in fact provoking the protectors.”

Braun claimed to have “photographic evidence” of tear gas and concussion grenades used by police, and witnesses who can testify that a woman who received severe arm injuries was a victim of police action.

“They have done some horrible things to our people while they are praying,” Braun said.

But Laney believes law enforcement officers found themselves outflanked by the protesters’ savvy social media campaign, providing what he considers a skewed view of the protests. In time, with help from the National Sheriffs Association, the peace officers were able to counter with their own photographs, videos and messages, he said.

“We had to let the public see the real story of what was happening,” Laney said. “If it stayed prayerful and peaceful we wouldn’t have to be there.”

A bill to change the time in North Dakota has run out of time.

Paul Laney, Cass County sheriff, saying law enforcers will back away from a contested bridge to de-escalate tensions over the Dakota Access Pipeline protests.