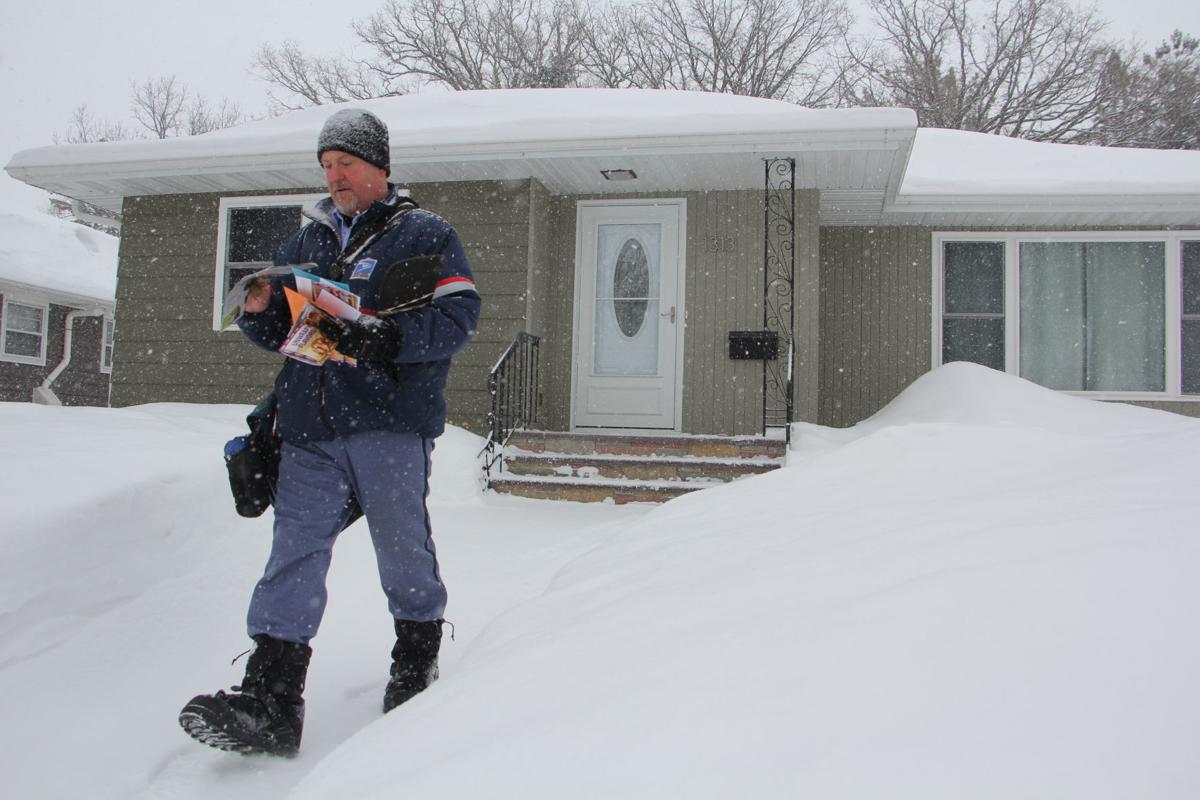 Rick McDougall makes his way along his mail route on Lake Avenue. 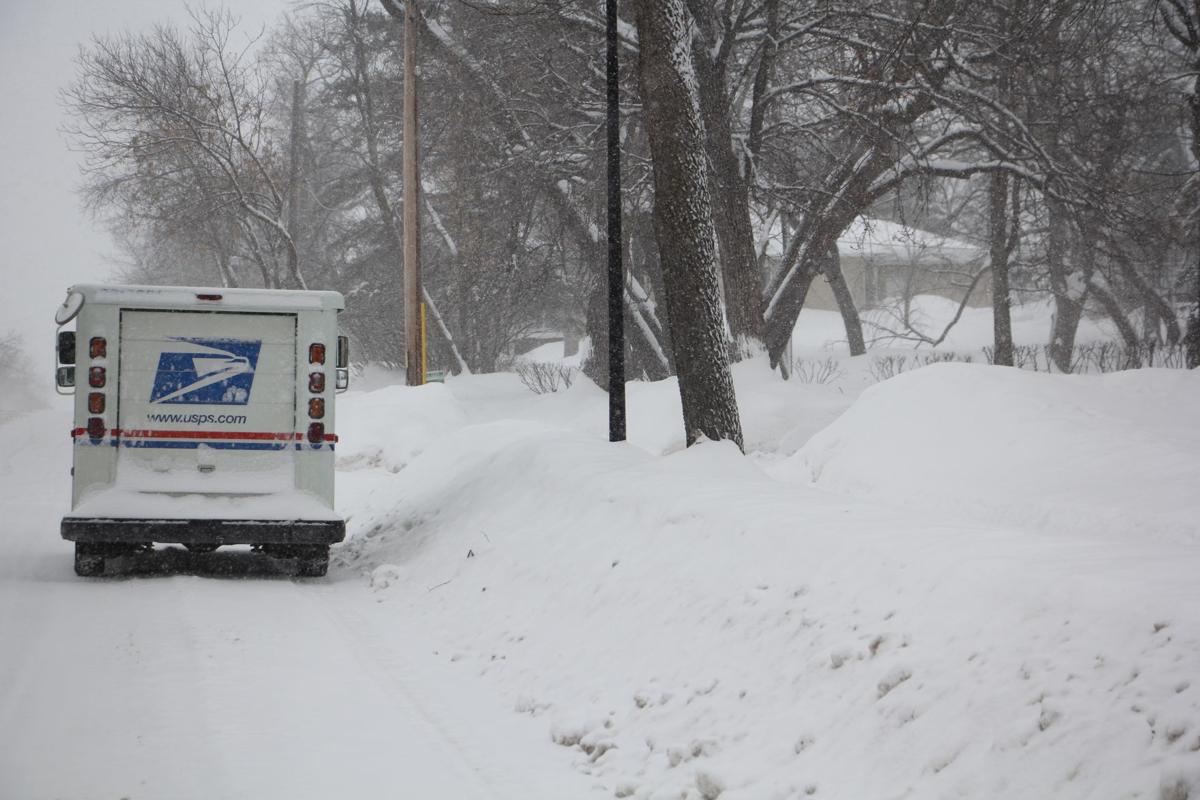 Mail carriers with walking routes park their trucks and walk a few blocks, delivering mail, making their way along. 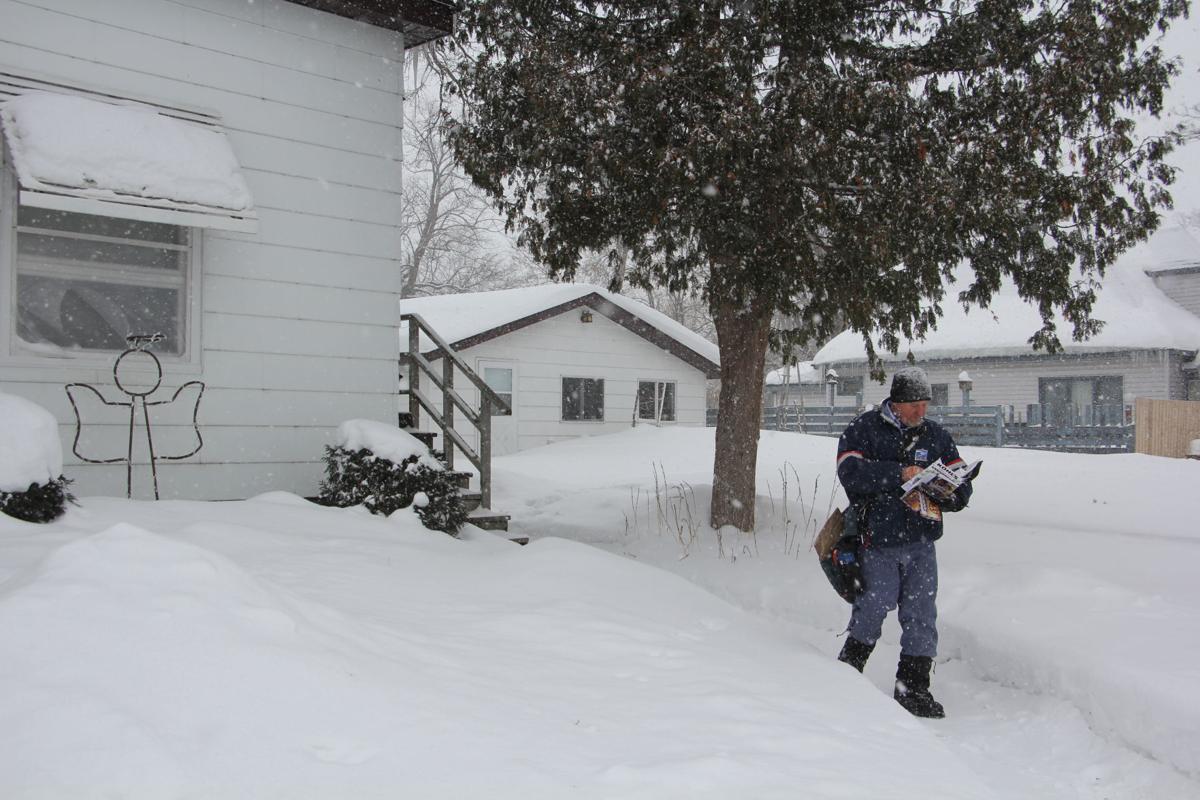 The snow was pretty heavy on Tuesday afternoon, as Rick McDougall delivered the mail.

DETROIT LAKES, Minn. — Shortly before Rick McDougall parks his United States Postal Service truck at the intersection of Lake Avenue and Forest Street in Detroit Lakes, the snow begins to fall. It collects on the cold ground and on the high drifts that have nestled in yards. McDougall begins to make his way along his neighborhood route, trudging along the narrowly shoveled paths on the sidewalk. He seems unphased by the weather, even a little chipper, despite the negative 7 degree wind chill.

“I actually stay pretty warm, as long as I keep moving,” he says as he trudges through drifts that have blown across the sidewalk. “This winter coat I have on is pretty toasty.”

McDougall has been working for the postal service for 21 years, since he finished a four-year enlistment in the United States Marine Corps. He’s been a mail carrier for 10 of those years and, currently, he works a walking route in Detroit Lakes.

It’s a cool job that has him outside for at least six hours a day, maybe even a little longer in the winter. But he stays warm by layering up. He says carriers get a clothing allowance, so they’re able to purchase official postal service attire to stay warm, like the boots that pull on over his tennis shoes and protect him from the piles of snow.

He also uses hand warmers and a face mask when it’s really cold, but he says the frigid temps don’t really get to him.

“In my opinion, 90 degrees is worse than 20 below,” he said, adding that you can’t really get away from the heat like you can from the cold by adding another layer or two.

McDougall has a pretty lengthy route, though he’s not sure exactly how long. He says he doesn’t track his steps or anything, but the previous carrier said the route was about seven miles of walking.

“I don’t know if I believe that. It doesn’t feel like seven miles,” McDougal says with a laugh.

This winter hasn’t made that seven miles easy, though. The bitter wind chills and record snowfalls even had the United States Postal Service suspending delivery on Wednesday, Jan. 30, something it almost never does.

McDougall says the carriers still worked that day, though. They spent their time inside, sorting mail, a task they do every day before taking off on their routes.

“A lot of us would have preferred to just work that day,” said McDougall, adding that just because delivery is suspended, that doesn’t mean the mail stops. The following day, carriers had to deliver twice their normal load.

McDougal says, if anything, it’s the snow that gets to him.

“I’d rather have it cold and not more snow,” he said. “I can always bundle up for the cold.”

The snow, which hit record-breaking amounts in many parts of Minnesota and across the Midwest in February, is tough to trudge through. McDougall says that’s what wears him out quick. Not only does it make him have to watch his footing, it lengthens his route because he can’t cut through yards.

“It really helps when customers keep sidewalks clean. We definitely appreciate that,” he said.

But the weather comes with the territory. McDougall says you don’t really go into the profession, unless you like being outside, and he says he actually enjoys that he gets to get out into the fresh air for most of his work week.

STURGIS, S.D. — The mayor of Sturgis says city officials can't stop people from coming to the annual motorcycle gathering in the Black Hills, …

The Public Service Commission plans to meet with the companies on July 23 to learn more about their financial challenges.

MINOT — Police say the victim of an accidental shooting in Minot has died of injuries suffered last week.

TOKIO — Fire has destroyed the home where a 5-year-old girl died on the Spirit Lake Reservation in North Dakota earlier this month, authorities said.

The Industrial Commission on Friday contemplated the future of Coal Creek Station and the implications of its closure for an ethanol plant next door.

Rick McDougall makes his way along his mail route on Lake Avenue.

Mail carriers with walking routes park their trucks and walk a few blocks, delivering mail, making their way along.

The snow was pretty heavy on Tuesday afternoon, as Rick McDougall delivered the mail.