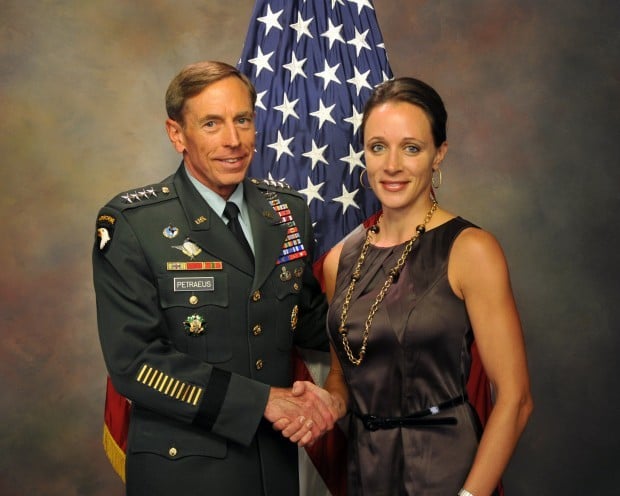 Gen. David Petraeus and Paula Broadwell. They first met while she was at Harvard. 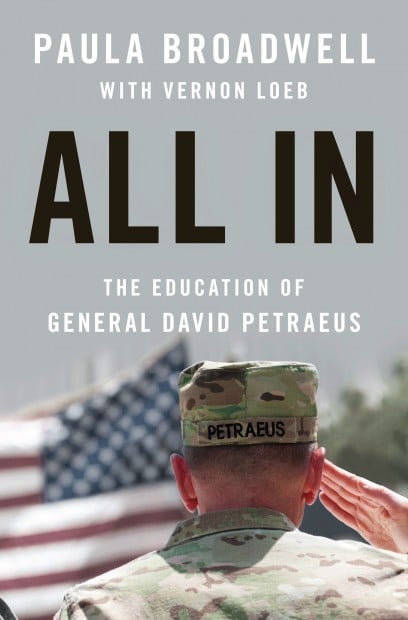 All In: The Education of Deneral David Petraeus by Bismarck native Paula Broadwell.

She put her doctoral dissertation and her personal life on hold to tell the story of a man who rewrote the rules for modern warfare.

Paula Kranz Broadwell, a native of Bismarck and a graduate of Century High School, followed Gen. David Petraeus to Afghanistan in the summer of 2010 to write her new book, "All In: The Education of David Petraeus."

"I got a great perspective of the war through his eyes," said Broadwell, who spoke to the Tribune in email and phone interviews. "That is what I wanted, was the war through the commander's eyes."

She co-wrote the book with Vernon Loeb, metro editor of the Washington Post.

It was Broadwell's belief that firsthand experience with Petraeus was the only way to tell his story. Broadwell went on runs with Petraeus, followed him to his twice-weekly visits to the battlefield, watched as he worked with U.S. and coalition politicians and lawmakers and observed how he handled the burden of command and the tragedies of war.

"My interest in embedding with ground units was based on a hope that, in addition to expanding my situational awareness, I could help readers understand how the counterinsurgency strategy was playing out on the battlefield," Broadwell said.

Broadwell is a graduate of West Point, and has 15 years of military service behind her, so being on site often seemed like an unconventional West Point class reunion.

"It was a lot of fun for me," Broadwell said. "I have a different version of fun than most people. It was good to be back with my boys, my big brothers. A lot of my West Point class is serving in Afghanistan."

Broadwell had the opportunity to watch Petraeus as a strategic leader, as a commander and as a companion. She refers to him as a visionary, a communicator and mentor.

"He drives himself as hard or harder than he drives his

subordinates, but he takes care of them at the end of the day. He also has a tremendous capacity to manage stress and perform under pressure. He can compartmentalize frustrations and always remains highly functional. He is very self-aware of his strengths and weaknesses," Broadwell said. "He is never satisfied with himself and always seeks to improve at the task, whatever it may be."

Although Broadwell wrote a portrait of a military figure and strategic leader, she could not ignore his attributes as a diplomat and a scholar.

"He inspires people of all ages to improve themselves. On that note, I would conclude that his sheer energy whether applied to soldiering, scholarly pursuits, public outreach or mentoring can be equally empowering for an organization or an individual subordinate," Broadwell said.

Broadwell generally felt safe in Afghanistan. What made her stand out most in the field was not her gender or her role as a writer, but her attire.

"I never felt threatened as a Westerner, nor did I feel that out of place as a female journalist. As you know, many female journalists have covered Afghanistan over the years, and a significant number of women serve in the military ... so I wasn't that much of an anomaly," Broadwell said. "In the field, however, I was probably more of a curiosity for the children, who rarely saw other women, much less a Western woman, and much less a woman in jeans and Kevlar."

Aside from capturing the war through the eyes of the man in charge, Broadwell looked to other sources for their views on the general and his story.

"Most of the characters in the book have been my colleagues, friends or mentors for some years and many of them were willing to share emails with me along the way," Broadwell said. "I had gone to the academy, grad school or even served alongside many of them."

After three years of extensive work, "All In" is published, and Broadwell has transitioned from touring war zones to touring the U.S. to promote her book.

"Now I am reaping the fruits of the labor," Broadwell said. "This all made me realize, which I have believed since high school, that anything you dream is possible."

Broadwell appeared on "Fox and Friends," CNN, Jon Stewart's "The Daily Show," National Public Radio and other venues to speak about the book.

She admits that she "is not a writer by nature, so (the book) was a bit of a stretch," but speaking on national television is something she has done before.

"It can be a bit daunting, but I have spoken on national television before. My intention with this tour is to bring attention to ‘Wounded Warriors,'" Broadwell said. "Over half a million soldiers have debilitation post-traumatic stress disorder, and as a society we need to draw attention to that and welcome them back."

Twenty percent of the profits from sales of her hardcover book will go to the Team Red, White, and Blue project.

"This book is about soldiers, and about strategic leadership," Broadwell said. "It is a portrait of modern warfare and a soldier's sacrifice."

​Madison Barney is an intern at the Bismarck Tribune. She can be reached at 250-8260 or maddy.barney@bismarcktribune.com.

The Bastiat caucus, an unofficial, voluntary association of legislators within the North Dakota House and Senate, often is described as an ult…

Gen. David Petraeus and Paula Broadwell. They first met while she was at Harvard.

All In: The Education of Deneral David Petraeus by Bismarck native Paula Broadwell.