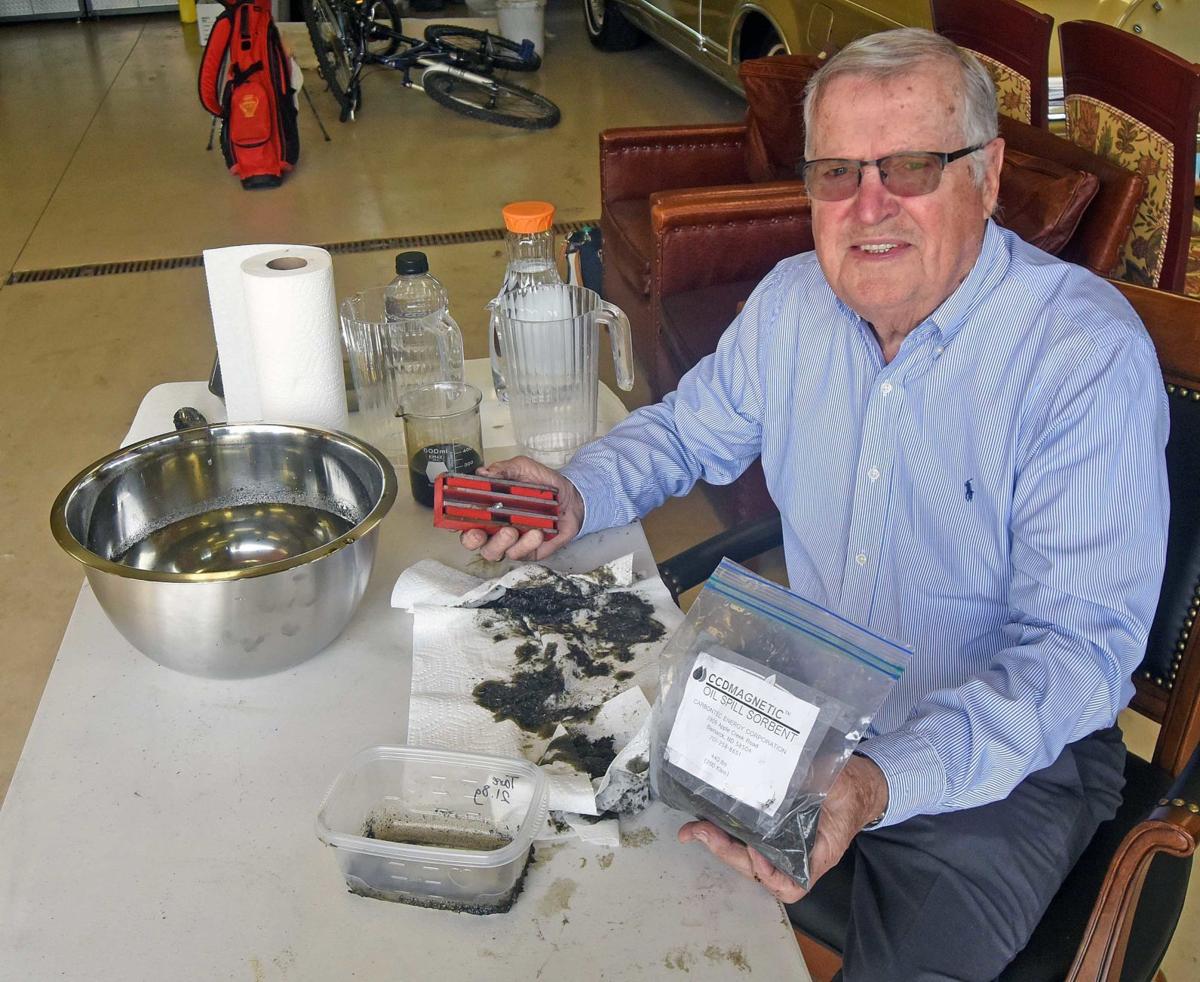 John Simmons has applied for a patent on a product his company developed to recover oil from spills on water and land. The product is made from wood chips and magnetized to facilitate a fast cleanup. Simmons' business is Carbontec Energy Corp. of Bismarck. 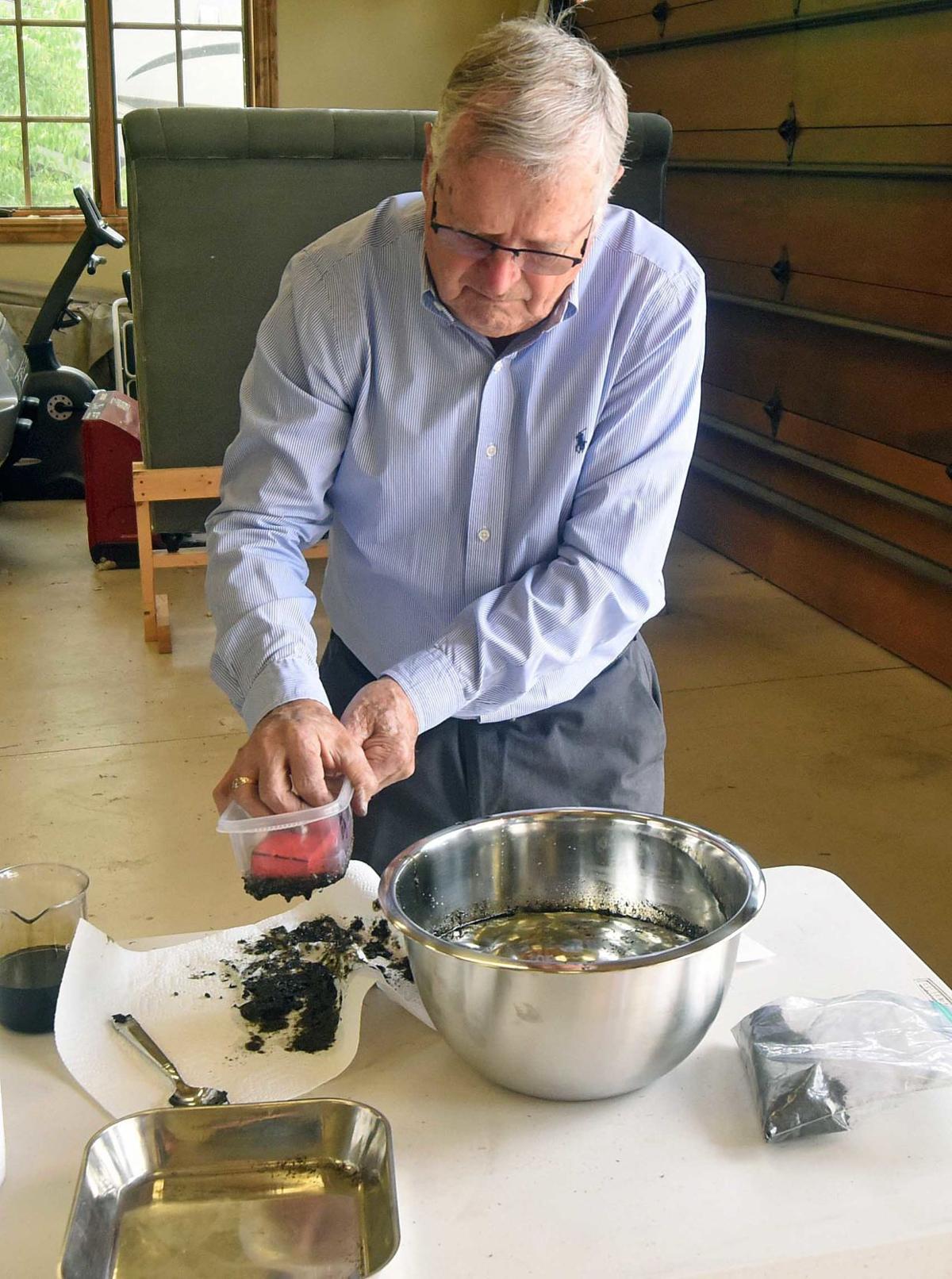 John Simmons uses a magnet to remove oil-covered wood chips from a bowl containing water and motor oil. Simmons demonstrated how the treated wood chips can attract oil spilled over water. The product also works for oil spills on land.

A Bismarck-based company has reworked an old product -- wood chips -- to better clean up oil spills.

Carbontec Energy Corp. has magnetized its chips, which attract and hold oil when placed atop a spill. Their magnetic nature enables them to more easily be removed to collect oil from land or water.

Chairman John Simmons believes the chips could help with spills both large and small.

Tribes and communities along the Missouri River concerned about major oil spills on the water could have them at the ready, he said.

“If there’s a big spill on Lake Sakakawea for instance, you’d have skimmers with a magnetic head,” Simmons said, referring to a machine often used to clean up oil that spills into bodies of water.

The wood chips would pull out more than 90% of the oil in the water, Simmons said.

Magnetic booms placed in the water also could be used along with the chips to capture the oil and prevent it from flowing farther away from the site of the spill. Such a setup could be useful if the Dakota Access Pipeline were ever to leak at its Missouri River crossing upstream of the Standing Rock Sioux Reservation, Simmons said.

Tribal members are concerned that a leak would devastate their water supply. The chips and other equipment could be staged near the Fort Yates water intake in case a leak ever happens, Simmons suggested.

Oil companies should pick up the tab for such an effort, he said. If a large spill were to happen, an aircraft likely would need to be used to scatter the chips over the spill. A barge with an incinerator could be used to collect and burn the oil-laden chips.

“They maintain some fairly large stockpiles, trailers, everything,” he said.

While large oil-related spills garner a lot of attention, smaller spills happen all the time in the Bakken. Often several per week are reported to state agencies, and ones under 10 barrels or 420 gallons are not required to be disclosed at all.

Not all spills are of oil. Brine, which is highly concentrated saltwater that comes to the earth's surface alongside oil and natural gas at well sites, also leaks from time to time in the oil fields. When it does, it can render farmland infertile. Carbontec's chips won't work on brine spills, though researchers are always working on projects to identify best practices for cleaning up that fluid.

Simmons envisions that truckers hauling oil could keep small 22-pound bags of the chips in their vehicles to respond to any spills that occur as they go about their work.

“If each trucker had two bags on board and sprinkled it there and picked it up with a small magnetic sweeper, they’d clean it up right away,” Simmons said.

The company first developed the wood chip product, sans magnetic properties, around the time of the Exxon Valdez oil spill off the Alaskan coast in 1989. The chips are treated with a blend of sunflower oil, canola oil and wax to attract crude oil.

Carbontec recently filed a patent on the newest iteration, the magnetic wood chips, which it calls CCD Magnetic Oil Sorbent. Simmons declined to describe the process of magnetizing the chips while the patent is pending. He said all the ingredients are environmentally friendly.

If an oil company were to use Carbontec’s wood chips over water, the state would need to approve the product to ensure it doesn’t contain any damaging ingredients, Suess said. In situations like that, the state enters into confidentiality agreements with companies to maintain trade secrets.

While the oil industry has used various wood chip products for years to clean up spills, the concept of magnetizing the chips is relatively new, Suess said.

“It’s interesting,” he said. “There could be some uses for it.”

US: Rockets hit airbase in Iraq hosting US troops

US: Rockets hit airbase in Iraq hosting US troops

An Iowa-based company is spearheading a project to gather carbon dioxide from at least 17 Midwestern ethanol plants and pipe it to North Dakota to store deep underground.

SEBEKA, Minn. — Authorities say two suspects were killed and a sheriff's deputy was wounded in a shootout that began with a traffic stop Satur…

WEST FARGO (AP) — The assistant principal at a West Fargo high school who was arrested over the weekend will be back on the job this week.

Lawmakers during the first half of the legislative session pitched many ideas to their colleagues for shaping North Dakota’s oil, coal and wind industries.

John Simmons has applied for a patent on a product his company developed to recover oil from spills on water and land. The product is made from wood chips and magnetized to facilitate a fast cleanup. Simmons' business is Carbontec Energy Corp. of Bismarck.

John Simmons uses a magnet to remove oil-covered wood chips from a bowl containing water and motor oil. Simmons demonstrated how the treated wood chips can attract oil spilled over water. The product also works for oil spills on land.