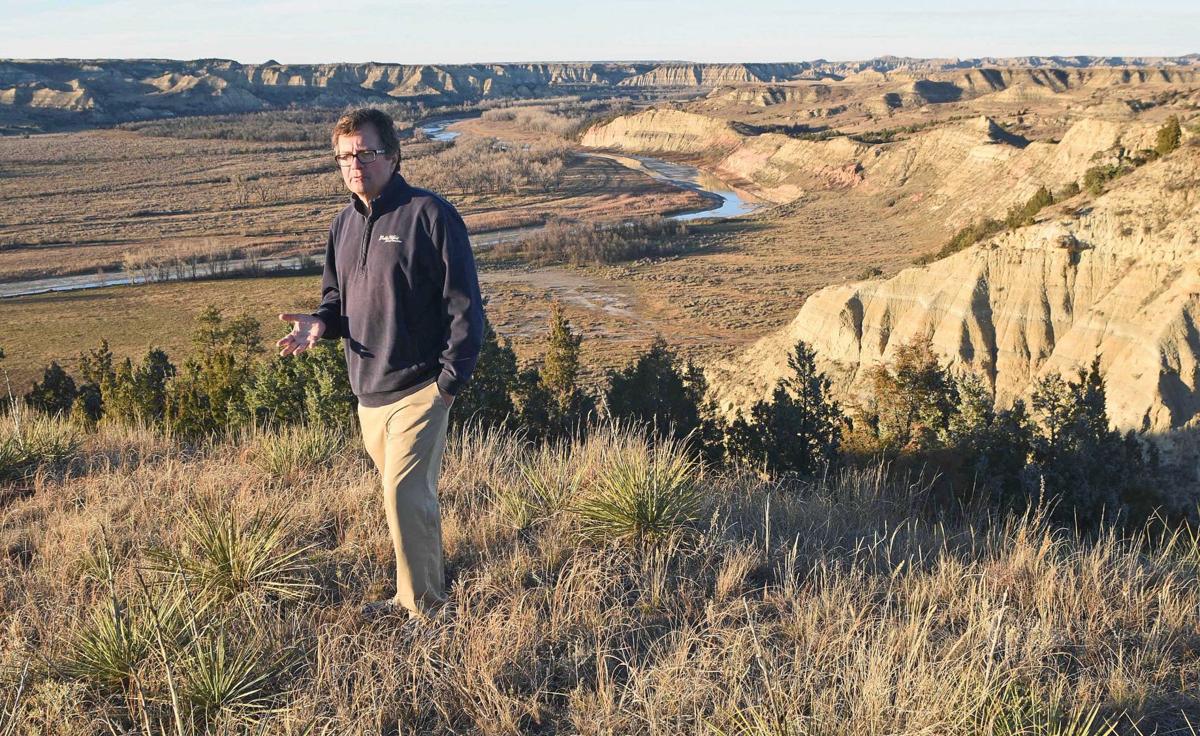 Western North Dakota landowner Jay Clemens stands on a Badlands overlook with a backdrop of the winding Little Missouri State Scenic River and Theodore Roosevelt's Elkhorn Ranch. The site is located about 35 miles north of Medora. 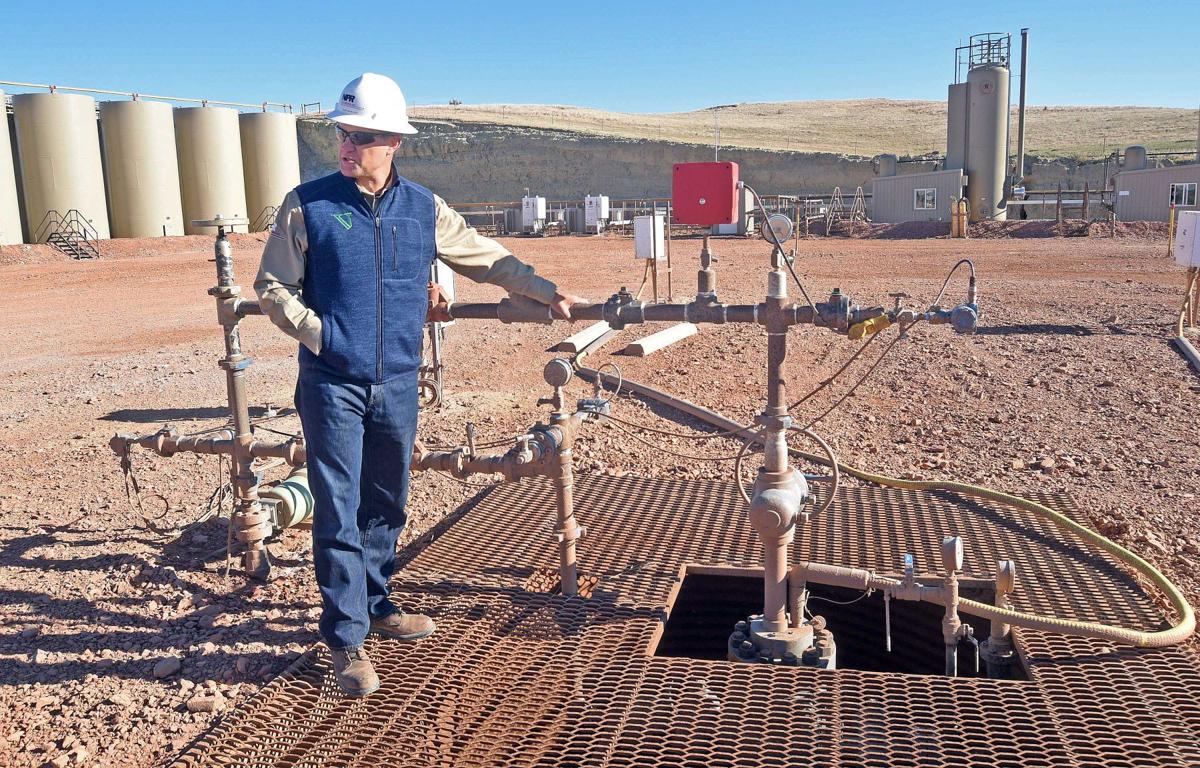 Clayton Miller, president of NP Resources, shows a submersible pump at a well site in Golden Valley County the company uses instead of above-ground pumping units. 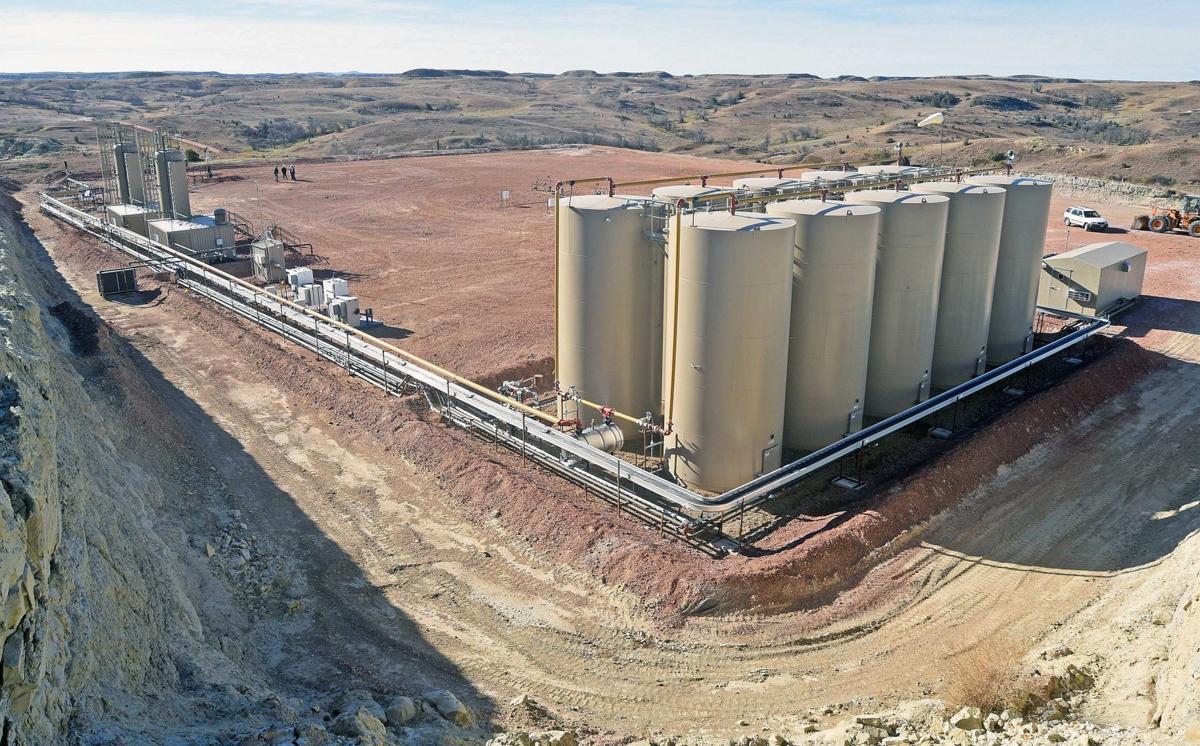 An oil storage and pumping site is set in Golden Valley County in the western North Dakota Badlands. 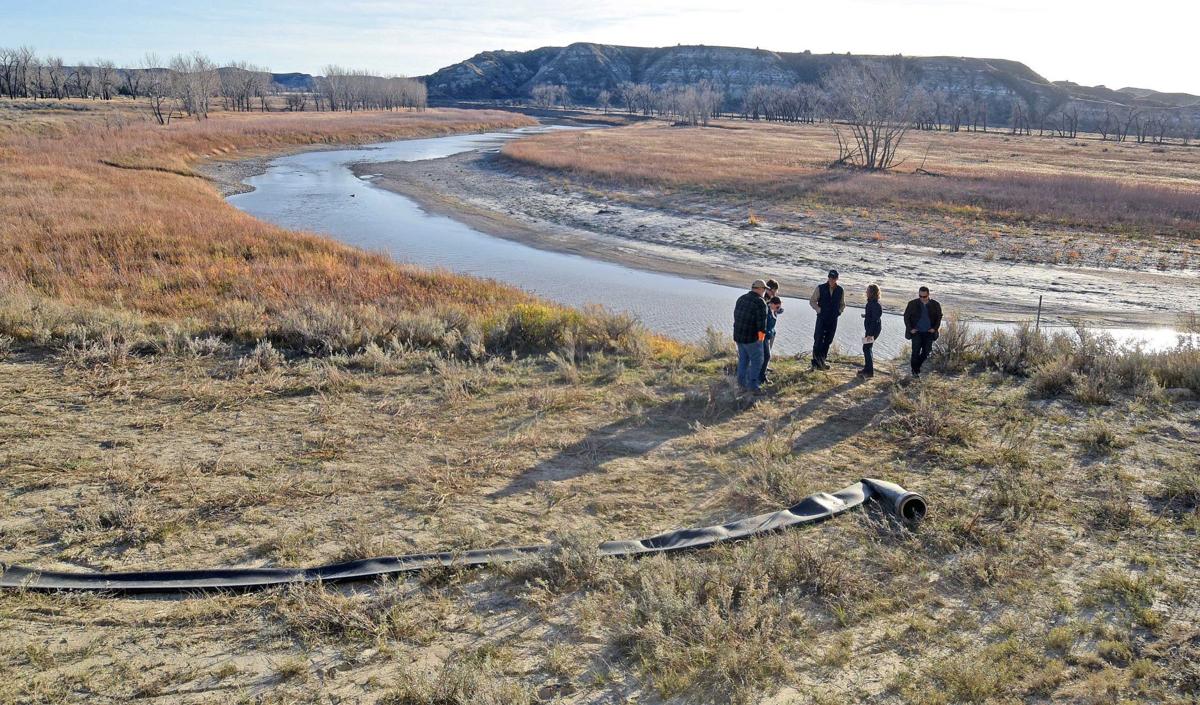 A flexible hose lies next to the Little Missouri River as oil company representatives tour the area in 2017. The hose is used in the process of sourcing water from the river for use by the oil industry for hydraulic fracturing in western North Dakota.

MEDORA — From a Badlands overlook across from the Elkhorn Ranch, Jay Clemens admires the same view Theodore Roosevelt once had while sitting on his porch.

But when he looks in the opposite direction on his western North Dakota property, Clemens can see oil wells, stockpiles of gravel and equipment drilling a saltwater disposal well.

The encroachment of development is increasing on his land along the Little Missouri State Scenic River. Clemens, a North Dakota native who lives in the San Francisco Bay area, is working to protect the views from Theodore Roosevelt National Park on the land he owns directly across from the Elkhorn Ranch unit.

“The impacts, I think, are going to be very, very substantial unless we do something about it,” he said.

Clemens, an attorney whose career included working for Lenovo and eBay, rediscovered the Badlands in the early 2000s after he was invited to serve on the Theodore Roosevelt Medora Foundation.

“Every time I went out there, I felt wonderful. I wanted to spend more time,” said Clemens, who grew up in Mandan.

Clemens decided to buy a ranch in the Badlands and ended up acquiring two neighboring properties, including the Buckhorn Ranch that is directly across from the secluded area Roosevelt chose for his ranch in the 1880s.

“This is a big part of American history in terms of the birth of the conservation ethic,” said Clemens, who serves on the board of trustees for the National Trust for Historic Preservation.

Clemens, a board member for the Theodore Roosevelt Presidential Library Foundation, is at the ranch several times a year while in North Dakota for meetings or visiting family. He also has a caretaker who watches over the property and helps promote it as a hunting and recreation destination.

In the past year, Clemens has seen an increase in requests for easements related to oil development such as proposed new wells, a road to access wells, new pipelines and a proposal for a saltwater disposal well. Billings County also is developing gravel resources in the area, including test holes on his property.

“When you don’t own the mineral rights or the surface rights, you can’t say no,” Clemens said. “The best you can do is have conversations with people and try to limit the intrusiveness of what they’re doing to the area.”

With each request, Clemens tries to work with the company to protect the views from the Elkhorn Ranch.

Right now, he’s considering a request for a new pipeline to transport saltwater, a waste byproduct of oil production. While Clemens prefers to disturb the land as little as possible, he also wants to limit the impact of truck traffic to the area.

“It’s really about providing the best environment for the park and the people who come out here,” he said.

Clemens said he turned down a request from the oil industry to access water from the Little Missouri River across from the Elkhorn Ranch for use in hydraulic fracturing. He believes more study is needed to determine the impact of industrial use on the river ecosystem and the sustainability of the practice.

“I really do think it’s crazy to pull water out of the Little Missouri,” Clemens said. “You have a hard time persuading me that’s the best use.”

That includes drilling multiple wells from a single location, using existing well sites when possible and connecting to pipelines right away so natural gas is only flared in an emergency.

Instead of above-ground pump jacks that bob up and down, NP Resources uses submersible pumps with equipment that is below ground.

At a Billings County well site adjacent to Clemens’ property, NP Resources drilled a saltwater disposal well on the same pad as oil wells so wastewater can be injected there rather than piped or trucked elsewhere.

At a different location in the same county, the company upgraded an abandoned well site rather than construct a new well pad and access road. NP Resources designs its well sites to federal standards, even if they’re not on federal property.

“We use the same standard for all of our facilities, which is the highest standard,” Miller said.

At one site, NP Resources used flexible temporary pipe to access water for fracking from the Little Missouri River about 5 miles away rather than trucking it a much greater distance from Belfield.

The company, which has temporary water permits through the State Water Commission, schedules fracking operations for times when the river flows are high.

“You can’t see the difference in the river flow,” Miller said.

The Little Missouri River Commission, a recently reactivated advisory board, is considering the state’s policy on industrial water permits from the river. The group delayed action last month on making a recommendation to the State Water Commission.

Denver-based NP Resources operates only in the Bakken, with offices in Beach and Fairfield. The wells in the Little Missouri River area are assets NP acquired from Whiting Petroleum.

The number of wells NP Resources has planned in the Badlands is unknown because the company is developing the area slowly, operating one rig at a time as it tests the geology in that area.

“We’re a pretty careful driller,” Miller said. “We’re not going to run multiple rigs and do a lot of aggressive things out here too quickly because we’re not real sure what the economics are.”

The Badlands Conservation Alliance has closely watched the preliminary plans NP Resources has submitted to state regulators and is concerned about the potential for significant development.

A stakeholder group called the Badlands Advisory Group is working to implement recommendations released last May after an assessment involving research and interviews about oil development in the Badlands.

“Most of the people we talked to were in favor of oil development, but they thought there needs to be more attention paid to protecting the surface resources, the Badlands themselves, the grasslands and reclamation,” said Rod Backman, a spokesman for the group.

The recommendations include encouraging the North Dakota Industrial Commission to do larger landscape planning, initiating a wildlife habitat improvement program and promoting a pilot project for oil companies to test some of the group’s recommendations.

The group is planning to meet in December to discuss next steps, Backman said. They are talking to NP Resources about participating in a pilot project.

Clemens and other conservationists also say they support broader landscape planning, looking at the cumulative impact of oil development on the area.

Clemens said he has offered to donate his land for a national monument designation or to extend the boundary of Theodore Roosevelt National Park, but so far it's not something anyone has wanted to pursue.

“The goal is to keep it as pristine as possible,” Clemens said. “There’s nothing quite like it in the U.S. It’s a very special place.”

Western North Dakota landowner Jay Clemens stands on a Badlands overlook with a backdrop of the winding Little Missouri State Scenic River and Theodore Roosevelt's Elkhorn Ranch. The site is located about 35 miles north of Medora.

Clayton Miller, president of NP Resources, shows a submersible pump at a well site in Golden Valley County the company uses instead of above-ground pumping units.

An oil storage and pumping site is set in Golden Valley County in the western North Dakota Badlands.

A flexible hose lies next to the Little Missouri River as oil company representatives tour the area in 2017. The hose is used in the process of sourcing water from the river for use by the oil industry for hydraulic fracturing in western North Dakota.