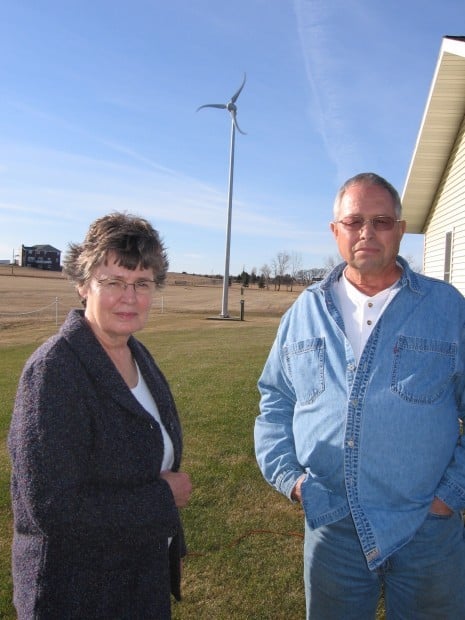 Jeanne and Larry Walth are enjoying the energy-saving benefits of their small wind tower, but not the controversy it's caused in Wishek. (LAUREN DONOVAN/Tribune) 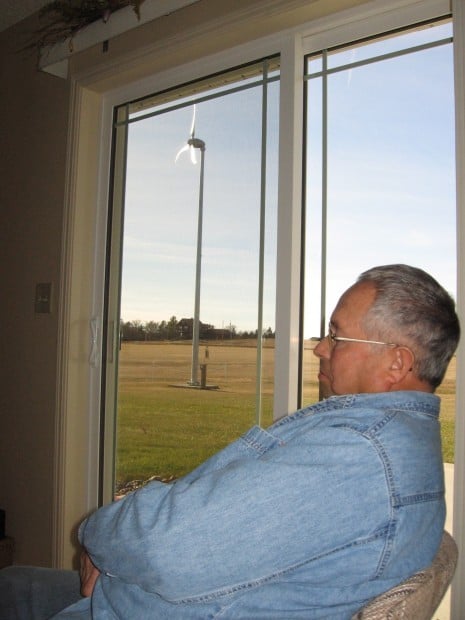 Larry Walth used to enjoy watching his wind turbine spin more before the Wishek City Council said he had to remove it by Friday, or face possible daily fines. (LAUREN DONOVAN/Tribune)
By LAUREN DONOVAN Bismarck Tribune

WISHEK — Larry Walth thought he was seeing green when he put up a small wind turbine in his backyard on the edge of Wishek’s city limits.

The Walths put up the 39-foot tower with a 2.6-kilowatt turbine motor in June.

Now, because of failure to conform to city zoning codes, he’s been told to take it down by Friday, or face possible fines of up to $500 a day.

He called an attorney and the Walths and Wishek may be headed for a legal showdown, instead.

See, Walth is committed to the turbine, which he believes is good for the environment, his own small act of kindness to the planet.

He also believes the city is on shaky ground, since a zoning ordinance prohibiting wind turbines in any but commercially zoned districts was passed in November, months after his was up and twirling merrily away.

His attorney says the city doesn’t have the authority to retroactively apply an ordinance.

Walth says he plans to leave it up.

The city attorney, Richard Herr, said he’ll recommend the city go after a court order to the contrary, rather than start a criminal action to collect the daily fine.

The apparatus cost Walth about $10,000 and he figures it would cost about $1,000 to have it uninstalled.

The turbine is hardwired into his electric service and he figures it saves him $40 or more a month on his electric bill. He’s also anticipating an energy tax credit, worth about 30 percent of the turbine’s cost.

The turbine company gave the Wishek school a laptop and software to monitor the turbine’s energy output, so it could be a learning tool, too, Walth said.

It’s getting mixed reviews in the neighborhood.

Brent Thielges lives about a block away, across vacant property, from the Walths.

He said the sight of the turbine doesn’t bother him.

The sound — a low-pitched drone — does bother him, some days more than others, depending on the velocity and direction of the wind. He likens it to the sound a computer makes, a whining hum.

He likes to be outside with his kids and sleep with his bedroom window open, things not so pleasant now with the humming sound from the turbine.

Initially, Thielges signed a statement Walth carried to the neighbors, saying the turbine didn’t bother him, but later retracted his signature, saying he should have waited until he’d lived alongside it longer to decide.

He’s also on the town council and says he stayed out of the discussion, only weighing in to vote for the new ordinance.

Herr, the town’s attorney, said it’s his opinion that the Walths violated even the old ordinance because wind turbines are not among permitted uses in a residential district, or even among conditional uses for which a special permit can be obtained.

“The grandfather argument (permission for preexisting structures) doesn’t apply because the ordinance was there in 2002, before the wind tower,” Herr said.

Walth said he applied for a building permit in April and when it was denied, put up the turbine anyway.

He took the case to the Wishek City Council which fined him $50 for building without a permit and said it would look into the matter further.

Jeanne Walth said it was her belief that the fine would be the end of it.

Then, the city drafted the new ordinance and held a public hearing, which Thielges said he was surprised the Walths did not attend.

The Walths received a copy of the ordinance with a letter from Herr directing them to remove the tower.

The city’s vote was unanimous. Thielges said one of the lessons he learned is that other municipalities and governing boards would be well advised to get ahead of the issue.

“They should address it to avoid a situation like this,” he said.

One turbine is one thing, but what if there were many around town, he asks. He also wonders if it creates this level of sound while new, what it will sound like in five or 10 years.

These are questions Walth didn’t anticipate when he put up the energy-saving device in his yard. He drives a propane-fuel pickup, chose energy-saving radiant floor heat for the couple’s new home and likes to tool around in a licensed utility rig that gets about 100 mpg. He’s hooked on television’s “Planet Green.”

“I just thought I was doing something green. What’s wrong with that?” he said. Now, if he could move his new home and wind turbine out of city limits, he’d do it in a heartbeat, he said.

Herr said Wishek doesn’t want the town to look like a wind farm and that the ordinance is a matter of aesthetic principles, too.

He figures this is a case that can’t reach settlement, because the city won’t be likely to take some monetary value in exchange for leaving the tower in place, or vice versa.

“The only way to get it settled is to have a judge decide,” Herr said.

Walth’s next door neighbor Steve Sayler said the turbine doesn’t bother him, but he could see a problem if there were dozens in Wishek.

“I kind of like it, actually,” Sayler said. “If it was me, I would have waited for permission. But beings as they didn’t have an ordinance against it, they (city) could leave this one alone. It’s a gray area.”

The Wishek City Council will go to court to force a couple to remove a wind turbine from their yard at the edge of town.

Jeanne and Larry Walth are enjoying the energy-saving benefits of their small wind tower, but not the controversy it's caused in Wishek. (LAUREN DONOVAN/Tribune)

Larry Walth used to enjoy watching his wind turbine spin more before the Wishek City Council said he had to remove it by Friday, or face possible daily fines. (LAUREN DONOVAN/Tribune)
© Copyright 2021 The Bismarck Tribune, 707 E. Front Ave Bismarck, ND | Terms of Use | Privacy Policy
Powered by BLOX Content Management System from TownNews.com.
You don't have any notifications.