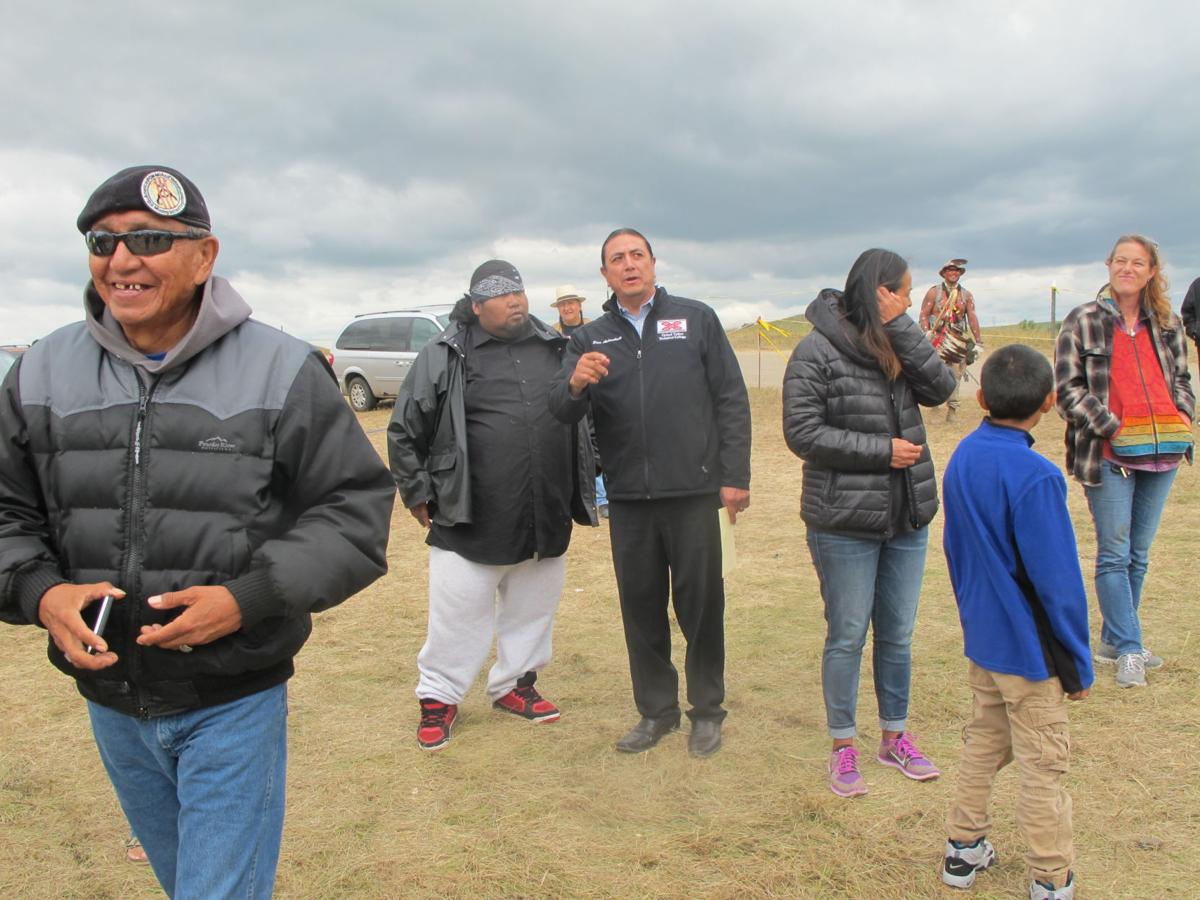 Standing Rock Sioux Chairman David Archambault II, center, is surrounded by family and friends following his address to the council fire gathering at the Dakota Access Pipeline protest encampment Thursday after returning from a federal court room in Washington, D.C. 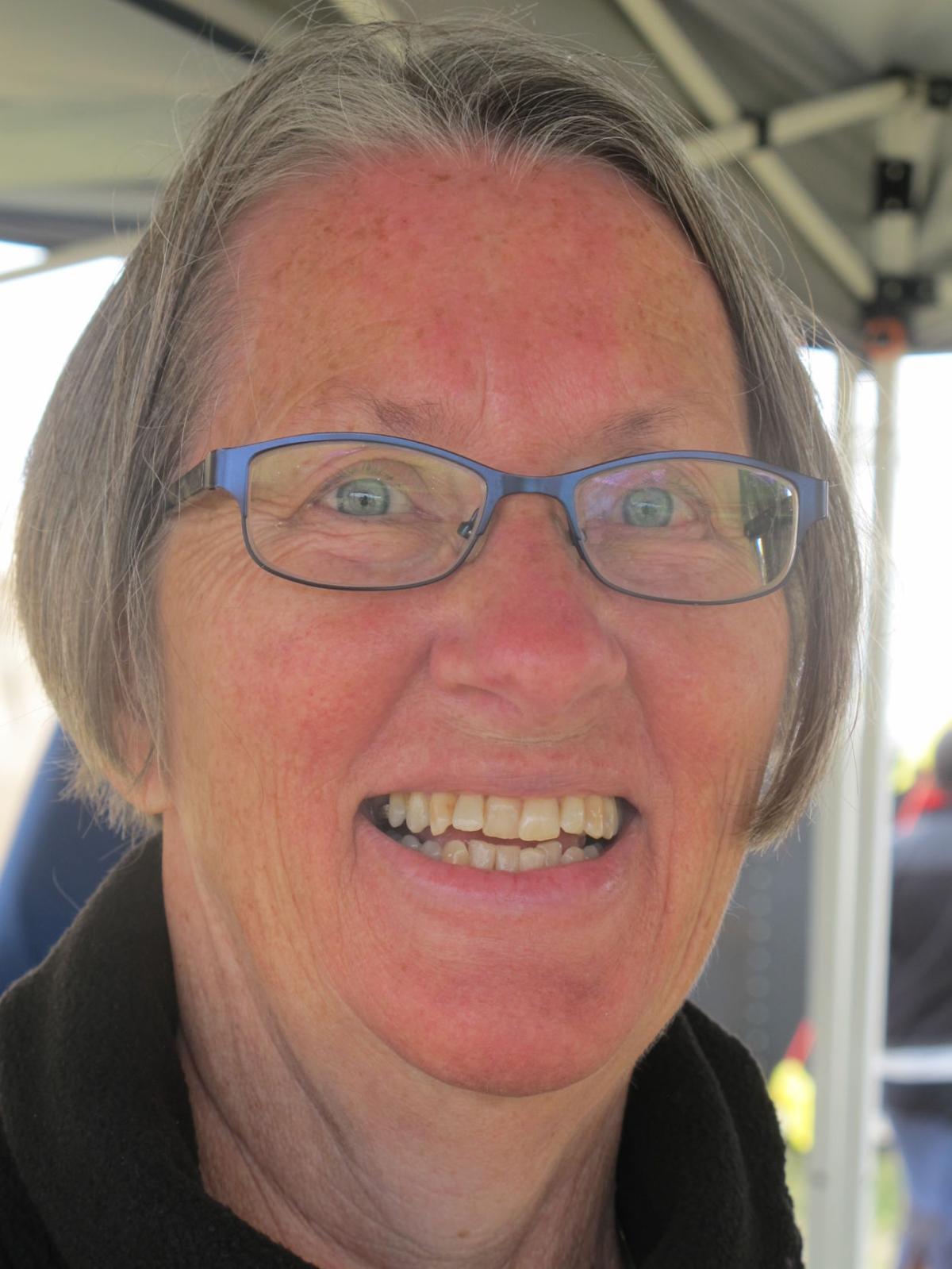 MORTON COUNTY — While hundreds are settling in for the long haul at an encampment to protest the Dakota Access Pipeline, the U.S. Army Corps of Engineers confirmed Thursday that the pipeline developer, Energy Transfer Partners, does not yet have a written easement to build the pipeline on corps property.

Corps spokesman Larry Janis said the easement is still under review, though the agency did issue Section 408 permission in late July that allows the easement to be written.

“They can’t build the project by accessing corps property from west to east across Lake Oahe,” Janis said of any current construction.

That could partly explain the company’s decision Aug. 18 to voluntarily stop construction at its work site just north of the Standing Rock Sioux Reservation near the Missouri River-Lake Oahe, where an active protest led to 28 arrests. The company has since received a federal court restraining order to prevent all arrestees — including tribal chairman Dave Archambault — and any “Jane and John Doe” from being at the work site and places such violations in federal, not district court.

The stopped work also stopped active protest, and protesters have since held prayer circles and other gatherings in the camp area about 1 mile south.

The realization that the company still does not have an actual easement surfaced Wednesday in a federal district court in Washington, D.C., where the Sioux tribe’s request for an injunction to stop the pipeline pending its suit against the corps was heard. The court judge said he wants more time to study whether the corps failed to follow the National Historic Preservation Act and other federal laws in its environmental review of the project. The judge said he will rule on the injunction Sept. 9.

“Everybody thought they had it (easement),” said attorney Carolyn Raffensperger, executive director of the Science and Environmental Health Network. “This is really important information.”

Raffensperger is among four attorneys volunteering legal services to the tribe and the individuals who were or may be arrested.

They addressed several hundred circled around the council fire mid-day Thursday; a cool, breezy day that called for blankets and jackets. They said legal issues may get worse for the state of North Dakota and other agencies.

Amnesty International observers were in the camp Thursday and an observer from the United Nations is scheduled to be in camp Tuesday, said Phyllis Young, the Standing Rock camp coordinator.

Young said the tribe is alleging racial discrimination for acts including a police barricade on Highway 1806 near Mandan that detours anyone going home to the reservation, but gives access to everyone else north of the reservation, and airplane surveillance.

“We are exploring the defense of that roadblock. There’s nothing to warrant that kind of lockdown," said Angela Bibens, an attorney.

The roadblock is manned 24 hours a day by North Dakota Highway Patrol troopers and other cooperating agencies. Bibens urged anyone with an outstanding warrant or unpaid child support to refrain from getting arrested to prevent their personal problems from getting worse. She said only people with a clean record should consider themselves arrest-able.

Meanwhile, camp managers met Thursday to discuss logistics now that it appears the camp, with anywhere from 500 to 2,000 people in tents and tepees, will stay active until the court’s injunction decision Sept. 9.

Johnelle Leingang, an emergency manager, said a noticeable number of people left the camp after Wednesday’s news that the injunction decision would be delayed.

“The majority are coming back, and the head cook said she’ll provide the same amount of food for 2,500 people,” Leingang said.

The camp is actually three camps: the main Seven Council camp on the north side of the Cannonball River, the Rosebud camp across the river and the original Sacred Stone Spirit camp further southeast.

Even as a small group from the Arizona Navajo Nation that brought meat and produce to the campers earlier this week packed up to go home Thursday, a group of eight Native Descendants from California rode in on motorcycles to stay through the weekend.

“It was a beautiful drive. We had the heart and the spirit to get here and, if we could stay longer, we would. This is history in the making,” Anthony Cuevas, said.

Chairman Archambault, who this week had an opinion piece on the protest published in the New York Times, spoke at the council fire after returning from the D.C. court hearing.

He expressed gratitude for the support from tribal nations around the country and for the peaceful prayerful nature of the camp.

“When this is done, if it’s ever done, they will remember the people who live on reservations. What I see today is unbelievable. The prayers are never-ending," said Archambault, adding that the protest has caught the attention of the nation.

“We are exploring the defense of that roadblock. There’s nothing to warrant that kind of lockdown."

Standing Rock Sioux Chairman David Archambault II, center, is surrounded by family and friends following his address to the council fire gathering at the Dakota Access Pipeline protest encampment Thursday after returning from a federal court room in Washington, D.C.