After pipeline fight, Standing Rock communities look to the sun to power their future
Share this
{{featured_button_text}}
1 of 3 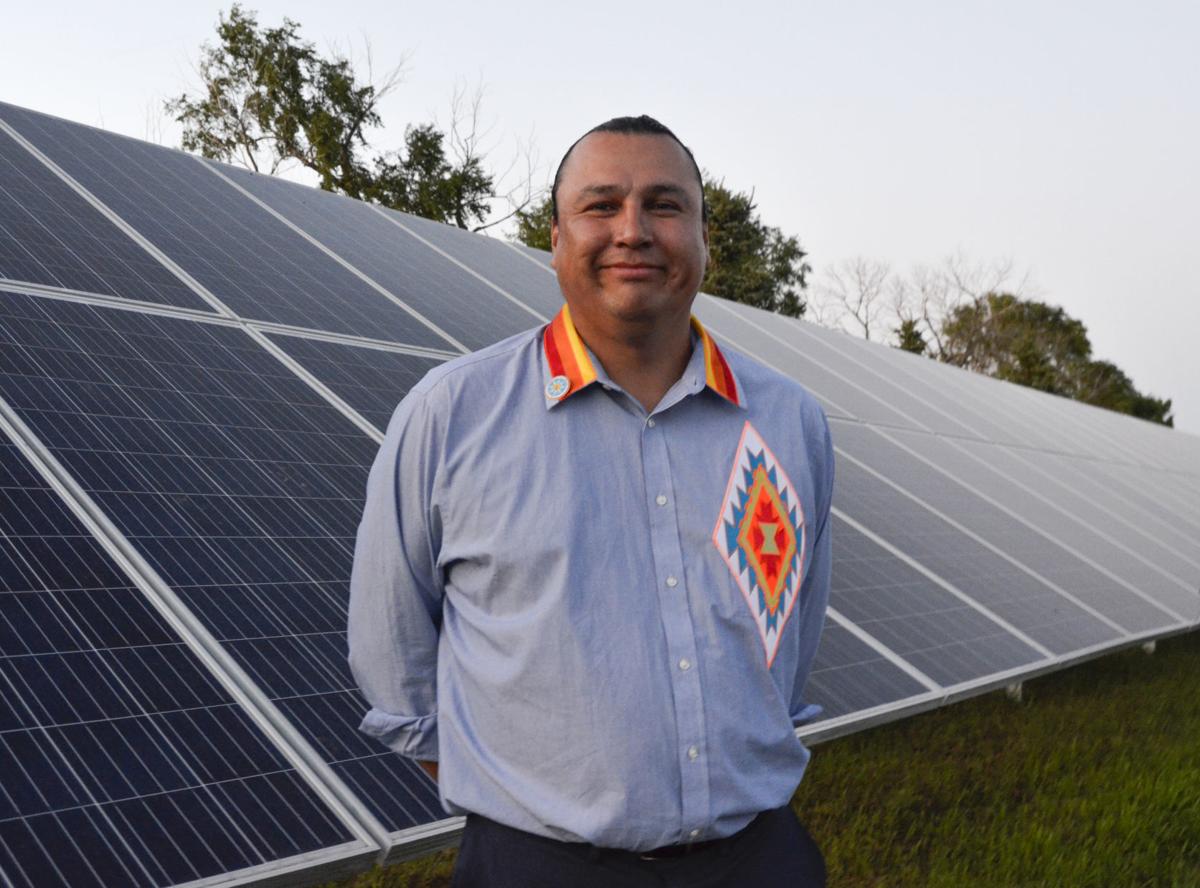 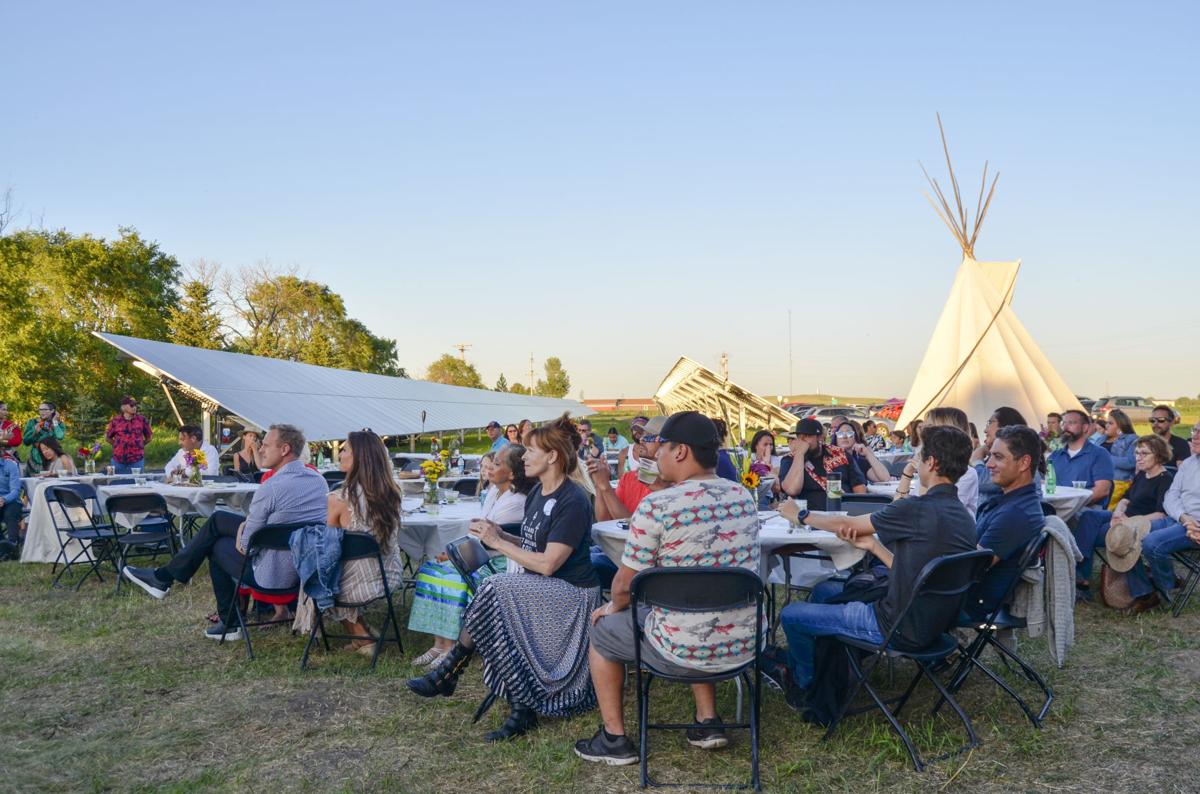 A crowd of Standing Rock Sioux tribal members, friends and well-known supporters gathered Friday at the site of the new solar farm in Cannon Ball. 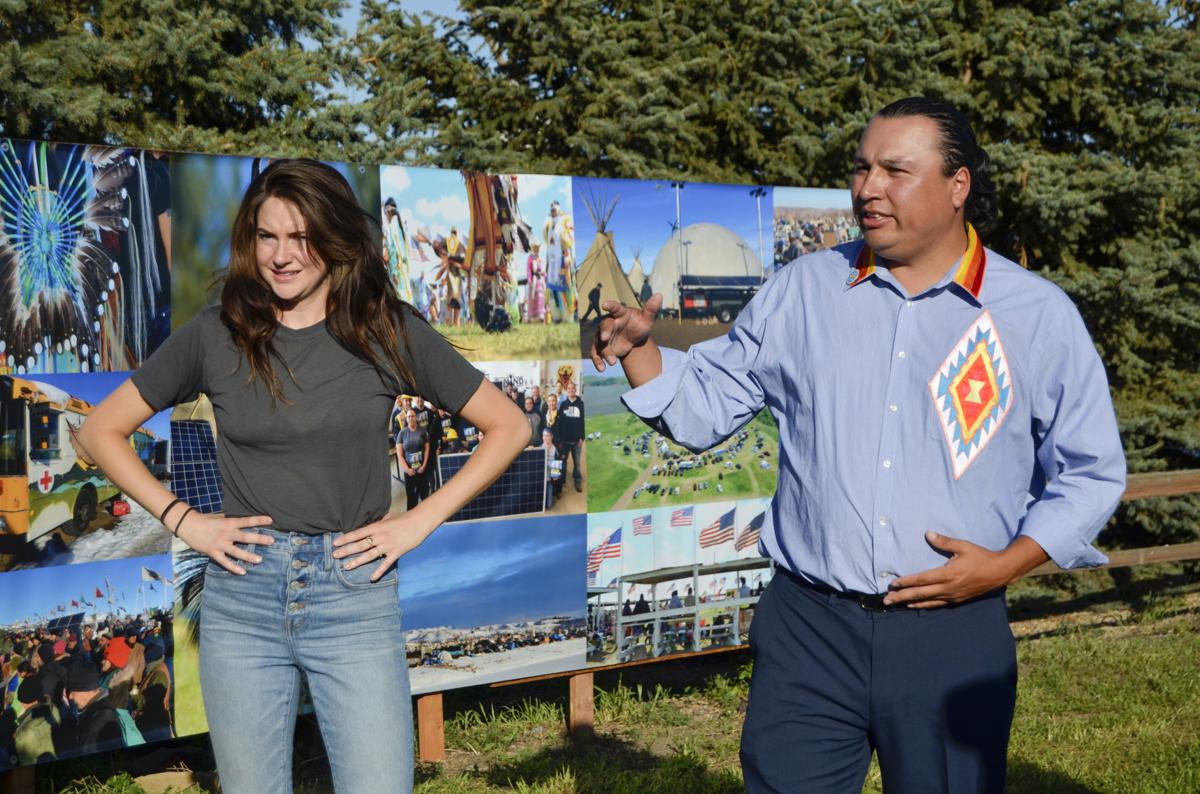 Actress Shailene Woodley, standing beside Cody Two Bears of Indigenized Energy, returned to Standing Rock on Friday for the first time in two years to celebrate the new solar farm. She supported the tribe during the protests against the Dakota Access Pipeline and was arrested at a demonstration in 2016. She agreed to plead guilty to disorderly conduct, while a charge of engaging in a riot was dismissed.

CANNON BALL — The northern border of the Standing Rock Sioux Reservation, once marked by a makeshift village of thousands protesting an oil pipeline, is now home to a solar farm.

Rows of solar panels jut out of the ground, sending more electricity back through the grid than any other sun-powered generator in the state. Soybeans surround the facility a few miles southwest of where the Dakota Access Pipeline crosses under the Missouri River.

Three years after the high-profile fight against the pipeline began, it’s still bringing people together at Standing Rock. Tribal members, their friends and prominent supporters including actress Shailene Woodley and Democratic presidential candidate Tulsi Gabbard gathered Friday night at an event that doubled as the official unveiling of the solar project and a reunion of pipeline opponents.

“When they laid pipe down there, yeah, we were heartbroken,” Cody Two Bears of the Standing Rock Sioux told the crowd of familiar faces. “But I knew something better was to come.”

From atop a stage, Two Bears looked out over the solar installation, the first major effort of his new nonprofit Indigenized Energy. The renewable energy project is one of several in the works at Standing Rock and nearby tribal communities.

With a 300-kilowatt capacity, the solar panels will generate enough electricity to power 60 homes in the summertime, Two Bears estimates.

“A lot of people will say that’s not very much,” he said. “But to the people of Standing Rock and Cannon Ball, that’s a very big deal.”

From camp to Cannon Ball and beyond

Construction began last October and wrapped up earlier this year.

The installation came about after a nonprofit known for facilitating solar projects around the world brought a mobile solar unit to the Oceti Sakowin protest camp in 2016.

The unit powered microphones and other communication equipment at the site where thousands of pipeline protesters convened over a seven-month period just north of the reservation’s border.

“Once we got there, it just really inspired us to do more beyond the protest,” GivePower President Hayes Barnard said.

Givepower partnered with Two Bears and several organizations that donated money and supplies to build the $470,000 installation outside Cannon Ball.

The Mor-Gran-Sou Electric Cooperative agreed to purchase power. Revenue will go toward helping offset the cost of electricity at a veterans’ memorial center and a community center on the reservation, as well as to initiatives for youth and for preserving the Lakota/Dakota language.

Two Bears went through training to learn the ins and outs of the solar business. He said the new installation is just Indigenized Energy’s first step.

“Ultimately, we’re looking at starting to put more on public buildings, schools and homes throughout the reservation and not just on Standing Rock, but in the surrounding areas,” he said.

North Dakota ranks near last in the nation for solar power generation, but interest is starting to pick up with new solar-focused companies forming and construction slated to begin next year on a 200-megawatt solar farm in Cass County that would dwarf the installation at Cannon Ball.

Efforts to train North Dakotans for solar energy jobs are sprouting up.

Indigenized Energy is among several groups that hosted a four-day introductory solar seminar this spring at United Tribes Technical College.

“I wasn’t quite sure how a training like this would take off,” said Sheridan Seaboy-McNeil, career and technical education director at the Bismarck school. “As soon as we put it out on our United Tribes Facebook page, we had a waiting list.”

The college will hold a follow-up training in August to build a mobile solar trailer in time for the United Tribes International Powwow in September. The unit will power the event’s crow's nest, including its sound system and computers.

“Our big goal is to get it out into the community and help provide power to different events, whether it’s street fairs or fun stuff like that,” Seaboy-McNeil said.

Other efforts are underway at Standing Rock to build interest in solar jobs.

Henry Red Cloud, owner of Lakota Solar Enterprises on the Pine River Indian Reservation in South Dakota, is working with Young on those projects. But first, he’s hosting a five-week “Train the Trainers” course for people across Indian Country.

“They can take this newly acquired knowledge and share it within their respective communities,” he said.

Some of those trainers could soon come to Standing Rock.

He and Young say the sun holds a deep meaning for the Sioux people beyond its ability to generate electricity.

“As sun gazers and sun worshippers, we have great respect for the solar system,” Young said.

They point to the sun dance, a ceremony the Lakota people have long celebrated, as an example.

“We have been embracing renewable energy in a spiritual sense for eons,” Red Cloud said.

And now, by putting up solar arrays on their reservations, he said, they are honoring their old ways with a new one.

Tribes do hit obstacles when pursuing renewable energy, with experts citing funding, pushback from utilities and complex regulations as some of their biggest challenges.

Still, the head of a Native American-owned solar company in Minneapolis says tribes are in a unique position to advance projects because they tend to avoid the partisan gridlock that can plague discussions about energy in the United States.

“We have our own differences in our tribal councils, but I think we can move a lot quicker than mainstream society can move,” said Bob Blake, owner of Solar Bear, which collaborated with United Tribes Technical College to host the training this spring.

At the same time, tribal clean energy advocates need to engage with the rest of the world to garner support for renewable energy projects, he said. Blake did earlier this month when he showed up at an oil and gas event on the Fort Berthold Indian Reservation.

Despite its location in the heart of Bakken oil patch, he said, attendees were so eager to learn more about solar energy that he ran out of business cards.

“If you are going to change things here and make it better for renewable energy, you have to start at the policy level,” he said. “That means running candidates, getting the word out. That means going to an oil and gas conference and talking about renewable energy like I did.”

Part of tribes’ interest in solar stems from the technology’s potential to improve the economic outlook for members.

“Our people have real dire needs,” said Joseph McNeil, president of the Standing Rock Development Corp. “Everyone is trying to look for a way to survive.”

He wants to build a microgrid with a central solar array to power Porcupine, a community with about 55 homes.

After paying necessities like electric bills, money is tight for some.

“I think if we reach our community base and directly affect our folks’ ability to afford electricity, then our community can spend on what they want rather than what they need,” McNeil said.

And for the youth of Standing Rock motivated to stop climate change, solar energy offers hope.

Standing on the same stage as Two Bears on Friday night, 15-year-old Tokata Iron Eyes looked out over the new solar farm at Cannon Ball.

Photos from Friday's grand opening celebration for the solar farm in Cannon Ball.

A crowd of Standing Rock Sioux tribal members, friends and well-known supporters gathered Friday at the site of the new solar farm in Cannon Ball.

Actress Shailene Woodley, standing beside Cody Two Bears of Indigenized Energy, returned to Standing Rock on Friday for the first time in two years to celebrate the new solar farm. She supported the tribe during the protests against the Dakota Access Pipeline and was arrested at a demonstration in 2016. She agreed to plead guilty to disorderly conduct, while a charge of engaging in a riot was dismissed.