After closure in Jacob Wetterling case, family tries to find its own missing
Share this
{{featured_button_text}}
1 of 3 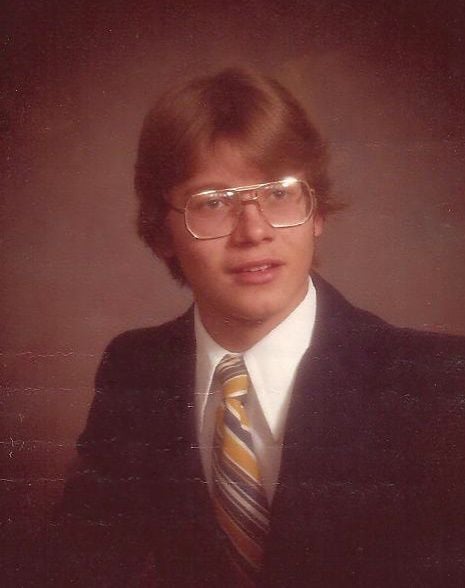 Bob Anderson is portrayed as a senior in high school. He went missing at age 32, with girlfriend Kristin Diede. He was last seen near Wishek in August 1993. 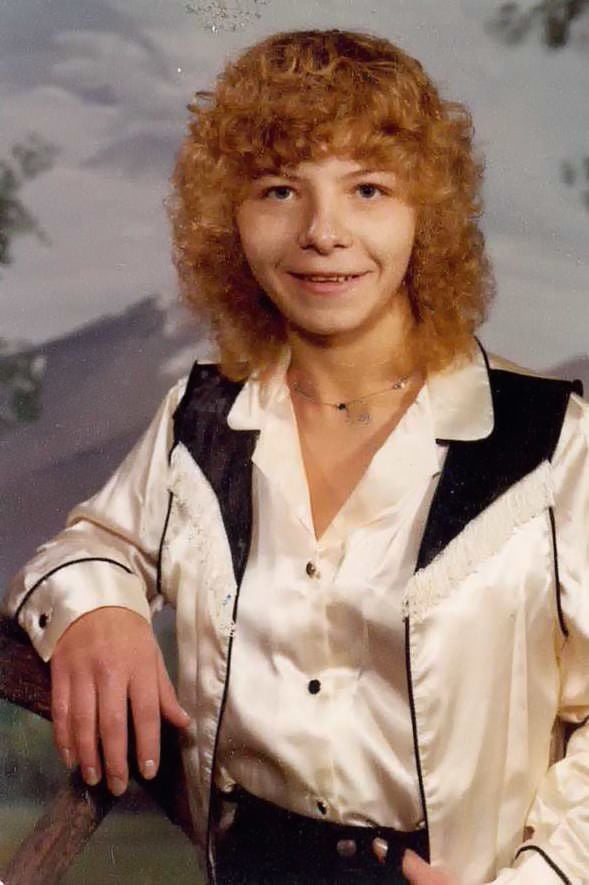 Kristin Diede, formerly Valerie Goebel, is portrayed here as a senior in high school. She went missing at age 30 with her boyfriend, Bob Anderson. She was last seen near Wishek in August 1993. 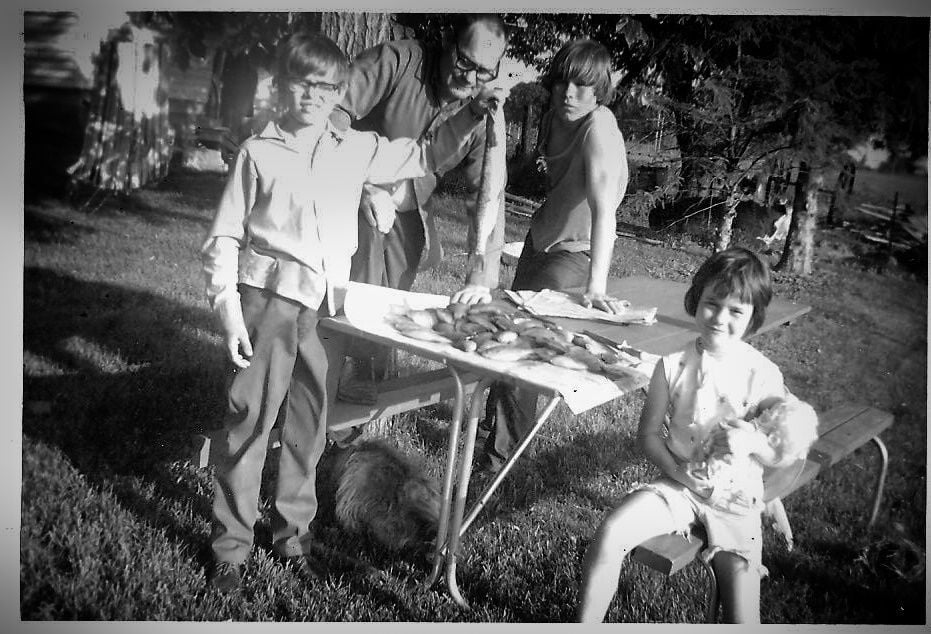 Bob Anderson, left, holds a fish in an undated family photo. He is surrounded by, from left to right, his, father Aldine Anderson, brother Dean Anderson and sister Debbie Anderson.

For most of his childhood, Chase Anderson believed his father had abandoned him as a toddler.

"He didn't care and took off," Chase thought. His parents were divorced, and he didn’t know his dad’s family.

But at 16, he contacted his dad’s brother, whom he'd never met. What he learned came as a shock: His father, Bob Anderson, had disappeared with girlfriend Kristin Diede near Wishek in 1993. They're believed to be homicide victims.

Bob and Kristin, formerly Valerie Goebel, were about 30 years old when they went missing. Each had two kids from previous relationships. Family members said Bob was an auto mechanic who liked rock music. Kristin was described as a simple and kind woman who loved her children.

They traveled to the small town in south-central North Dakota, where Kristin and ex-husband Clyde Diede grew up, so that Kristin's kids could see relatives. While there, they met with a state trooper about a custody issue.

Then, on Aug. 15, 1993, they vanished. Their bodies were never found, though the van they were driving was located days later in Aberdeen, S.D.

Newly emboldened by last month’s recovery of the remains of Jacob Wetterling, a Minnesota boy who was missing for nearly 27 years, Chase and his family have revived efforts to solve the mystery. With the help of a curious stranger, they set a $5,000 reward for anyone who can find the couple’s remains.

In so doing, they've become part of a national trend of renewed interest in cold cases following the Wetterling discovery.

"I've got to imagine there's at least a few people out there still that have the knowledge, the answers," said Chase, now 26 and living in Wisconsin. "Hopefully, enough time has passed that people are willing to talk or come clean."

Investigators are hesitant to discuss details, as they still consider this an active case. But the probe into the couple's disappearance began in Minnesota, where they were living at the time. It was later transferred to Logan County in North Dakota, where they went missing.

Authorities say they continue to follow leads as they come in. Family members have their suspicions and theories, but no one has ever been arrested.

"A lot of people were questioned," said Logan County Sheriff Andrew Bartholomaus, who is jointly responsible for the case with the North Dakota Bureau of Criminal Investigations. "But there was never enough evidence to charge anybody."

The case was transferred to Bartholomaus after the previous sheriff retired. He says he remains committed to solving it. He's hoping for tips from the public.

At first, family and friends believed the couple had run off. But the commitment they both had to their kids convinced them otherwise.

Susan Neis, a domestic violence advocate in Bloomington, Minn., helped Kristin after her estranged husband Diede was convicted of assaulting her there, according to court records.

“Kristin wasn’t particularly sophisticated, but she was a good mother to those kids,” said Neis, who added that Kristin had paid her bills before she left town, which would be unlikely had she run.

Likewise, Bob's brother, Dean Anderson, thought at first that he had run, because he could be somewhat depressed and was often broke.

"We didn’t want to believe anything could’ve happened to him," he said.

But as time wore on, Dean came to believe his brother was dead.

Bob and Kristin are among 15 cold cases — crimes that remain unsolved years later — listed by the North Dakota Bureau of Criminal Investigations.

There is no formula for what counts as a cold case, but five years since the crime was committed is about the line, according to Arnie Rummel, supervisory special agent for BCI in the eastern half of the state.

Once a case goes cold, he'll ask different investigators to review the file and try applying new evidence techniques. This case has been reviewed by at least five agents in the past 10 years, Rummel said. In this disappearance, they're looking for fresh leads — and bodies.

BCI last solved a cold case in 2006, Rummel said. Agents determined that Kathryn Bonderson, whose 1987 death was first deemed a traffic fatality, had in fact been murdered by her husband. At the time, there was a team of investigators dedicated to cold cases, but Rummel said it has since dissolved, because having a variety of investigators look at the case was equally effective.

Being a rural state "plays both ways" when solving this kind of case, Rummel said. Murders can happen in the middle of nowhere with no witnesses. But people in remote areas also tend to notice things just slightly out of the ordinary.

Rummel said both families have cooperated with the investigation.

Bob's family members are keen to talk about the mystery, as the disappearance continues to weigh heavily on them.

Dean said he thinks about the case all the time — as did his parents, who died recently.

“They passed away not ever knowing what happened to their son,” he said.

But in Kristin's family, the story is more often repressed.

Asked about the last time he saw her, ex-husband Diede said he could not recall.

"It was a long time ago,” he said. "I don't remember the time period you're talking about."

Kristin's niece, Connie Solberg, said she was often shut down as a young adult when she tried to ask questions about the disappearance.

"My cousins and I, it’s like we want to talk about it, but it gets shut down, like nobody talks about it,” she said.

Her sister, Sandra Goebel, didn't want to dwell too much on it, though she said she'd like to have the mystery solved.

“It’s been difficult, but everybody’s gotta move on and live their life,” she said.

National advocates for missing and unidentified people say the Wetterling case has inspired many people to renew their search for loved ones. The 11-year-old Minnesota boy disappeared nearly 27 years ago, and his case inspired advocacy of child safety and sex-offender registries. His killer led investigators to his remains last month, after prosecutors reached a plea deal with him on child pornography charges.

J. Todd Matthews, director of case management and communications for the National Missing and Unidentified Persons System, said he's seen an uptick in calls, emails and social media posts since Wetterling's remains were found last month. More people, including law enforcement, have called to make sure helpful data such as dental records are logged in the registry.

“It’s caused people to ask questions, and that’s great,” Matthews said. "This is the story that gave us hope."

Monica Caison, founder of the CUE Center for Missing Persons, said she's gotten an extra 50 calls since the discovery.

"The day he got identified, that whole week there would be a lot of calls and emails and texts," said Caison, adding that this tends to happen when prominent cases are solved.

After Chase learned nine years ago that his father was suspiciously missing, he started calling people in Wishek and talking to his dad's side of the family, who live primarily in Wisconsin and Minnesota.

He carries a list in his wallet with information he got from his uncle. It includes the vehicle ID number of the van found in Aberdeen, his dad's Social Security number, and phone numbers for the Logan County sheriff and BCI.

Chase said agents visited him in Wisconsin when he was 17, providing his first real glimpse into the case.

Last fall, he and the family traveled to North Dakota to meet with agents in the hopes of pushing them to solve the case.

"I feel I owe him that," Chase said. "I try to play a picture in my head of what it would be like if he were still here."

Another factor has contributed to the search recently: the interest of a curious stranger.

About a year ago, James Wolner, of Hebron, was searching the internet and stumbled across the cold case on the BCI website. "Believed to be victims of homicide," it reads.

Intrigued, he started calling everyone associated with the case and has become close to the Anderson family.

They said they were surprised by his interest of a person who has no connection to the case, but they are excited by his efforts to renew public interest and help with offering a reward.

"I could see it in his eyes that he was trying to do something for us, not get something from us," Chase said.

"If he can get any financial benefit out of it, all the more power to him," Dean jokes.

Wolner is calling across the region looking for new information and tips. And Chase says when his job slows in a couple weeks, he'll be back on the investigators' tails.

"I’m never going to stop until I find out what happened to them," he  said. "I’m going to set some fires and see what’s going on."

"I've got to imagine there is at least a few people out there still that have the knowledge, the answers. Hopefully, enough time is past that people are willing to talk or come clean."

Inside some of the world’s most unusual vaccination centers

Bob Anderson is portrayed as a senior in high school. He went missing at age 32, with girlfriend Kristin Diede. He was last seen near Wishek in August 1993.

Kristin Diede, formerly Valerie Goebel, is portrayed here as a senior in high school. She went missing at age 30 with her boyfriend, Bob Anderson. She was last seen near Wishek in August 1993.

Bob Anderson, left, holds a fish in an undated family photo. He is surrounded by, from left to right, his, father Aldine Anderson, brother Dean Anderson and sister Debbie Anderson.