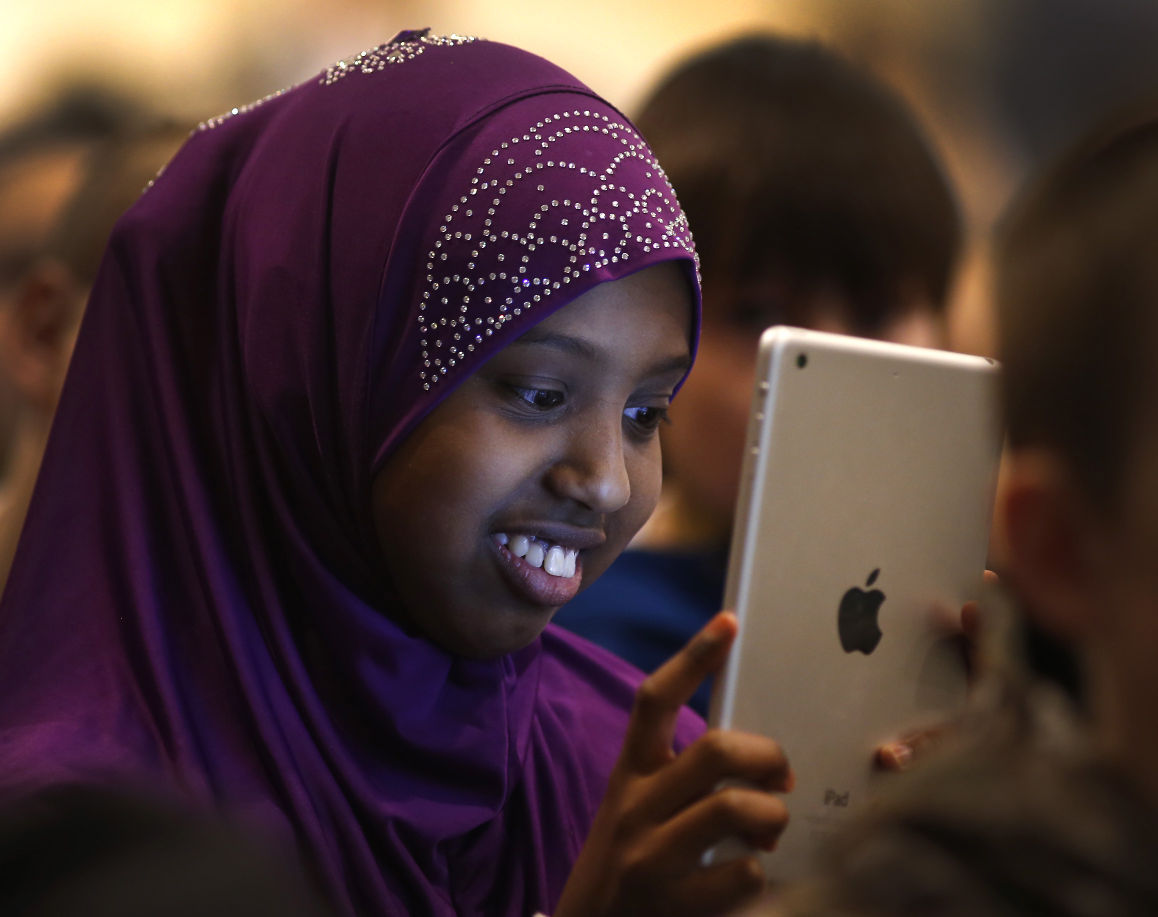 Nasreen Mohammed, a fifth-grader at Discovery School, photographs the “spacechat” between students from kindergarten through graduate school and astronauts aboard the International Space Station Thursday at the Memorial Union. 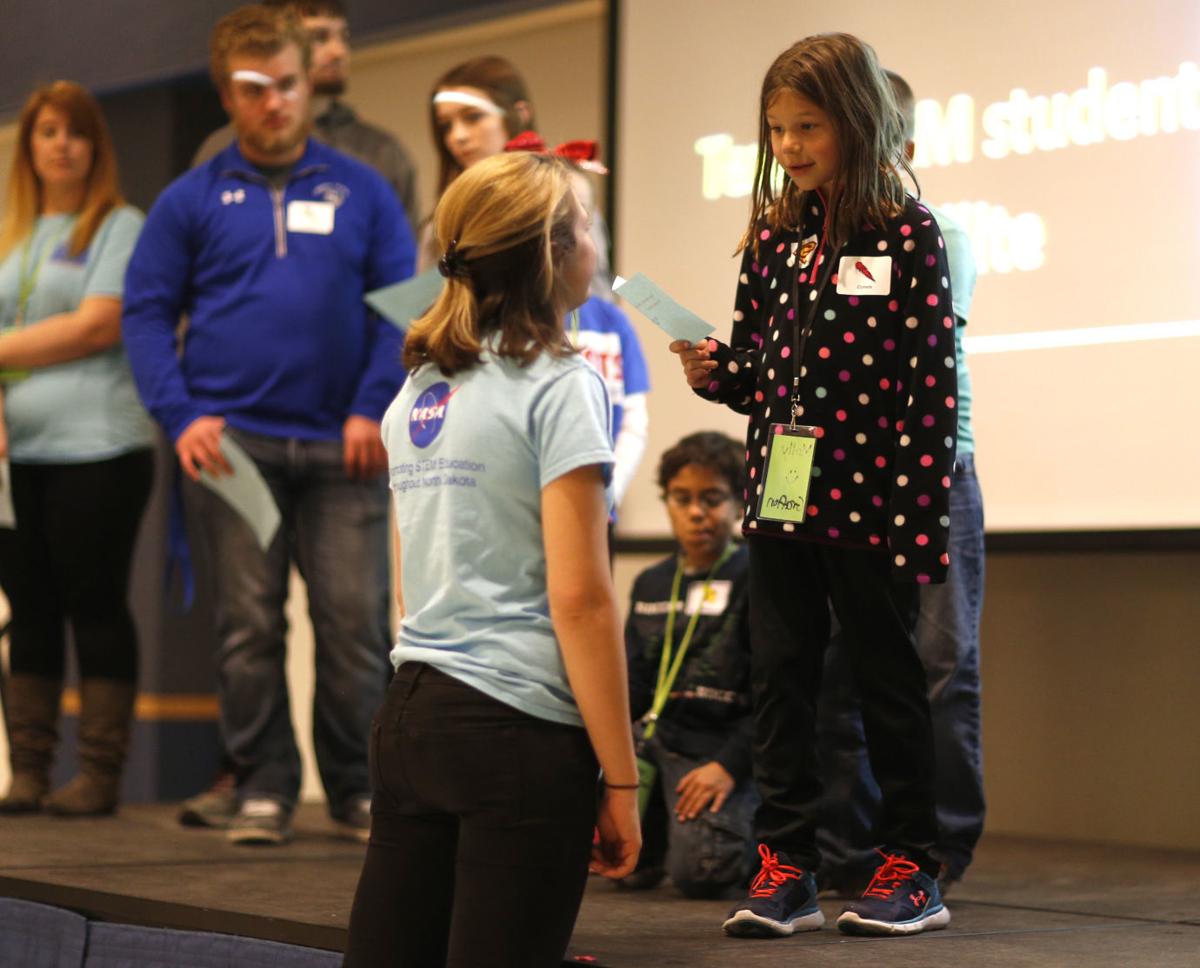 GRAND FORKS — For the 1,000th time in NASA’s history, an amateur radio call was made from Earth to astronauts aboard the International Space Station.

For the first time, that call was placed from North Dakota.

More than 350 students packed into the Memorial Union ballroom at the University of North Dakota on Thursday for an 11-minute radio call with NASA astronaut Tim Kopra, who is orbiting the planet on the space station.

One by one, 16 students ranging from elementary school to graduate school stepped to a microphone and posed questions to the astronaut.

Students wondered how realistic the film and book “The Martian” is, what parts of North Dakota you can see from space, if astronauts feel disconnected from what’s happening on Earth and what advice they have for students who want to be astronauts.

“My advice to some of you who might want to work for NASA or any place that requires a high level of academic achievement is to study very hard and work hard in school,” Kopra told those in attendance. “When you do well in school and learn a lot, it’s like money in the bank. You can always use that for future opportunities.”

The call was telebridged through W6SRJ, located at Santa Rosa Junior College in Santa Rosa, Calif., while Kopra was 200 miles above the western coast of the United States.

The event was a year in the making, said Marissa Saad, coordinator for the NDSGC. She said SARA approached her group about partnering together to make an event like this possible.

Along with the call, students participated in a STEM activity day, complete with hands-on science and engineering projects, including a geodome, demonstrations on radios, rockets, robots and racecars, as well as inflatable planets and space suit accessories.

Saad said the event was by far the largest one her organization, which brings science-related activities year-round to kids, has ever done.

“It’s a once-in-a-lifetime, amazing opportunity,” Saad said. “I never even dreamed that I could talk to an astronaut while they are flying overhead.”

Students participating in the event came from all across the area, including Molly Bjorneby, 8, who attends Century Elementary School in Grafton. She delivered the afternoon’s first question by stepping up to the mic and asking: “What do you do for fun on the space station? Over.”

“The space station is a great place to live and work,” Kopra said in response. “A lot of times in our free time, we love to take photographs. Over.”

Molly said she had a good time, even if asking Kopra questions was a little nerve-wracking.

“It was really fun,” she said. “I have never asked an astronaut a question before, so I was more nervous than excited.”

Even after the event had wrapped up, Saad said she still couldn’t believe how great the whole experience was.

Bismarck woman killed in crash on I-94

TOWER CITY — Kelli Hagerott, a 43-year-old Bismarck woman, was killed when the SUV she was riding in collided with an unoccupied tow truck tha…

Authorities have identified a Garrison man killed in a crash north of Bismarck on Tuesday afternoon.

Petitioners gathered fewer than two-thirds of the signatures required to prompt a vote on legalizing recreational marijuana through North Dakota's constitution.

How Groundhog Day is connected to astronomy

How Groundhog Day is connected to astronomy

Pregnant panda! Watch as this giant panda gets an ultrasound

Pregnant panda! Watch as this giant panda gets an ultrasound

Nasreen Mohammed, a fifth-grader at Discovery School, photographs the “spacechat” between students from kindergarten through graduate school and astronauts aboard the International Space Station Thursday at the Memorial Union.