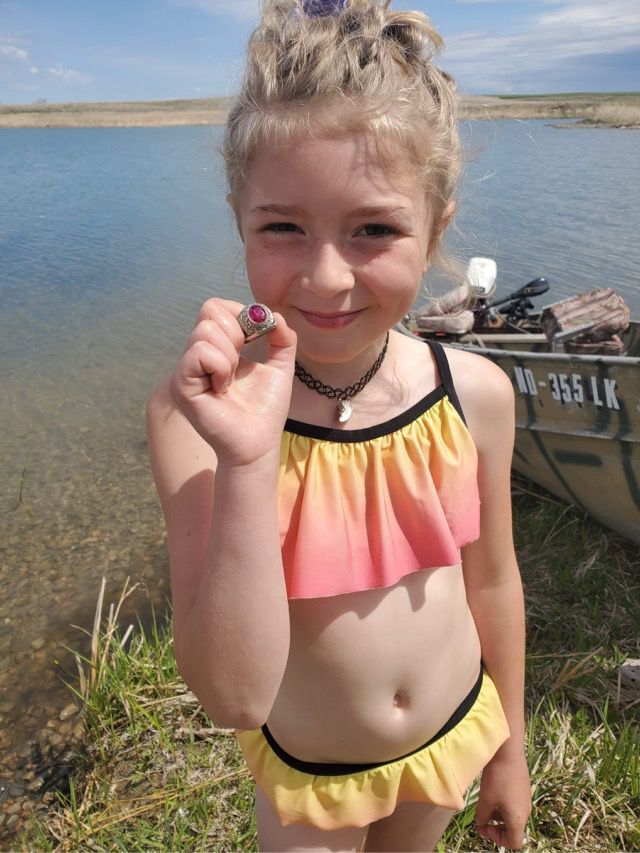 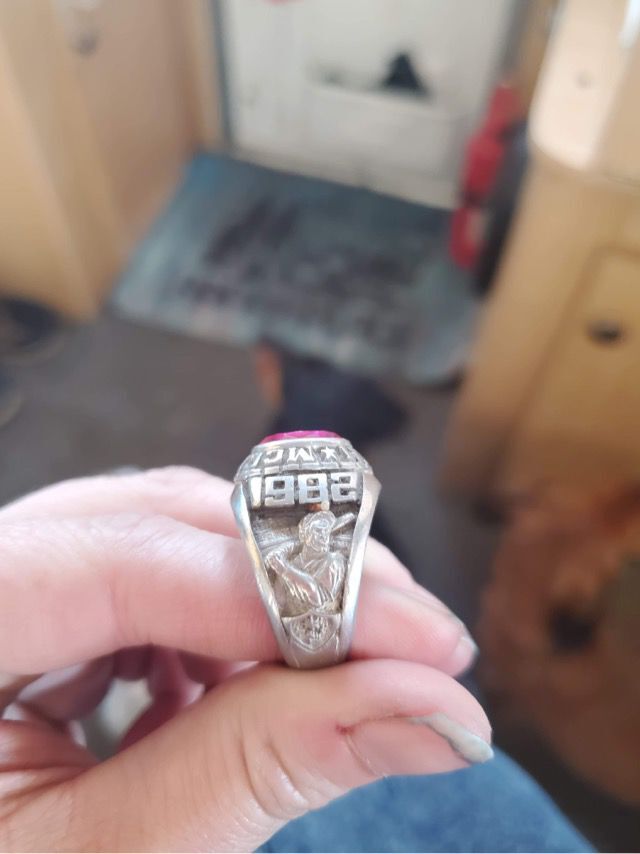 A 7-year-old’s love of science and rock collecting led to the discovery over the weekend of a class ring that’s been missing for 39 years.

Isadora “Izzy” Rose noticed the shiny object as she looked for rocks in ankle-deep water at New Johns Lake, a favorite camping spot for the Bismarck family. She knew it was a ring but didn’t understand the significance of a class ring until her mother, Robin Rose, explained it to her. Robin Rose posted photos of the ring -- from McClusky High School and 1982 -- on Facebook. The responses identifying the ring’s owner were quicker than she expected.

“It didn’t take more than half an hour,” Robin Rose said.

The ring belonged to Kerry Helm, who died a few years ago. His wife, Cheryl Helm, of McClusky, drove to the lake after several of Kerry Helm’s friends identified the ring from the Facebook photos. The two knew each other in high school but weren’t dating at the time.

Helm went to the lake to see if it really was Kerry's class ring, and discovered it was.

"His initials are on it," she said in a Facebook post. "This is so crazy. Thanks to a little young lady we have a piece of him."

Cheryl Helm was “happy, excited,” Izzy Rose said, adding that she herself was happy and proud to hand over the ring.

Robin Rose since the discovery of the ring has learned that Kerry Helm lost the ring the night of the senior class party. It wasn’t lost at the lake, however.

“The party was at a gravel pit and the lake gets gravel from that pit,” she said.

Izzy Rose, who will be in second grade this fall, said she’ll be on the lookout for shiny objects in the future.

This unknown detail about Stonehenge might blow your mind

New book aims to teach history of US civil rights

New book aims to teach history of US civil rights

North Dakota’s Republican Party has elected a Mandan-area businessman as its new chairman.

The company behind an oil refinery approved for construction near Theodore Roosevelt National Park in 2018 still has not started building, and regulators are giving it three more months.

Fifteen Republican governors including North Dakota's Doug Burgum sent a letter Tuesday to the U.S. Department of Commerce urging that the U.S…

North Dakota legislative leaders on Tuesday dismissed criticism of new limits on emergency spending by a governor-led panel, saying they have …

Construction is starting Monday on segments of state Highway 6, according to the state Transportation Department.

North Dakota's 21-city COVID-19 wastewater study is set to continue to the end of 2021, pending approval from a group of state lawmakers.

RAPID CITY, S.D. (AP) — Another earthquake has been recorded in South Dakota, the fifth since December.

Brooklyn Center man charged with murder in death of ex-wife