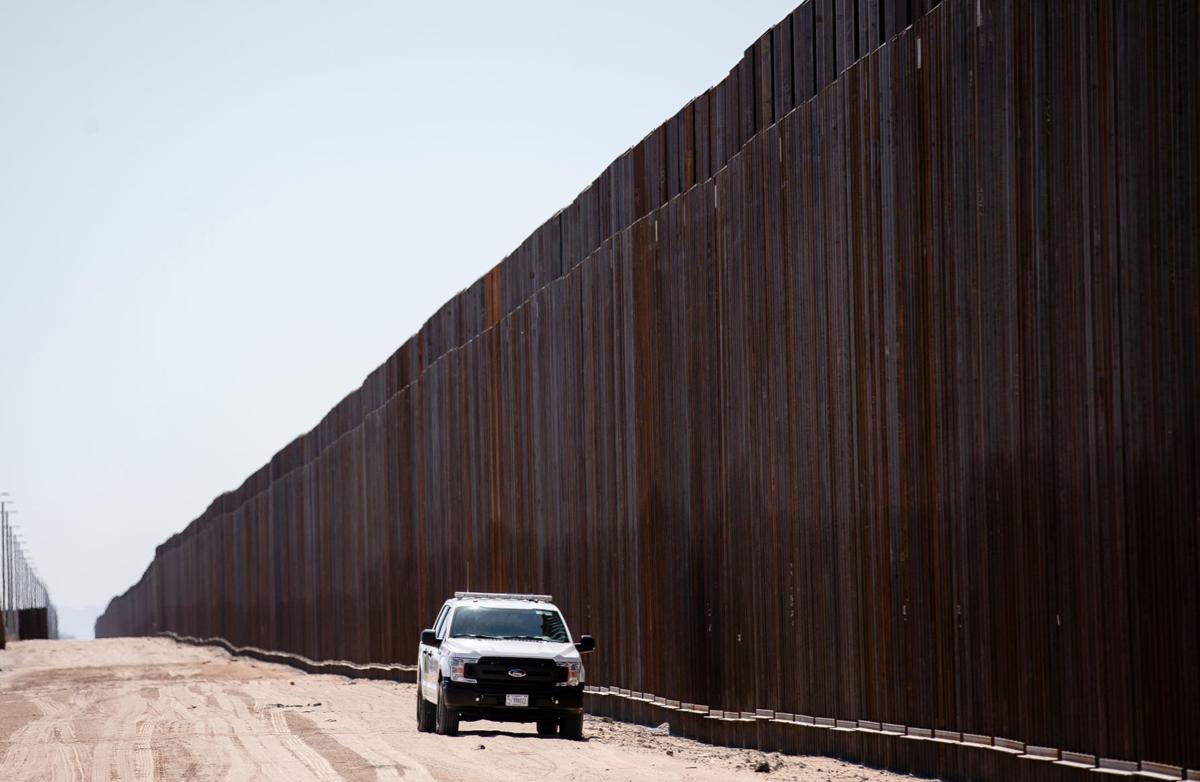 Acting Department of Homeland Security Secretary Chad Wolf said last week during a visit to Tucson that he expects to see as many as 400 miles of wall completed this year. 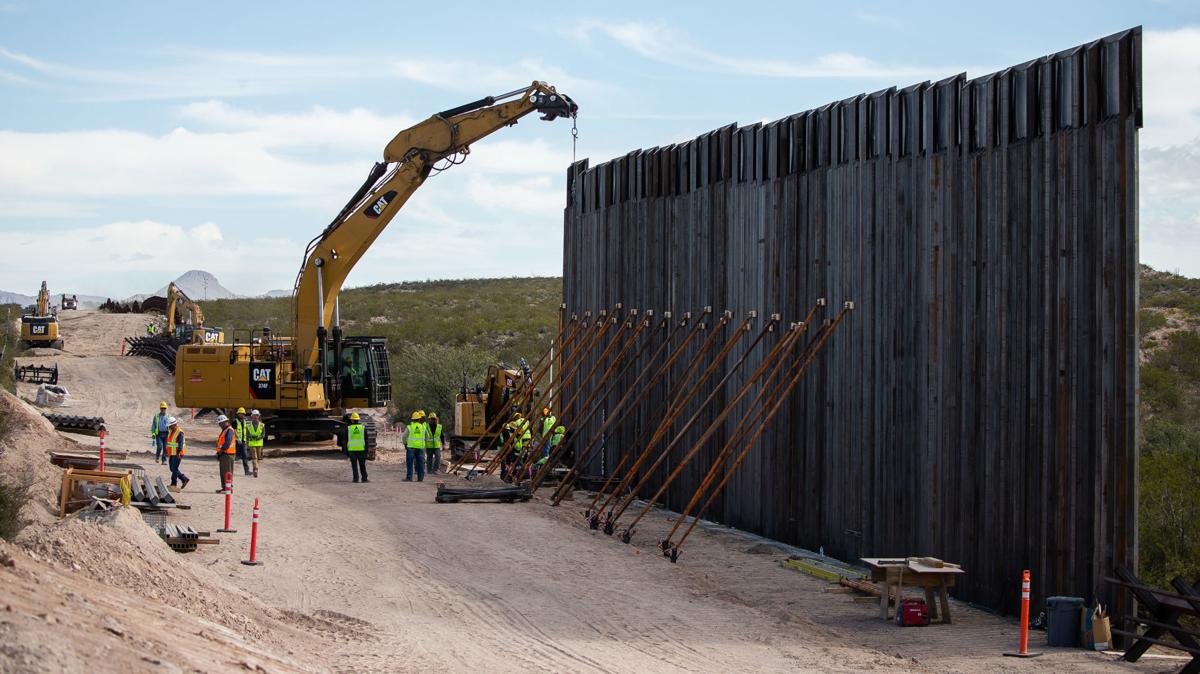 The wall along Arizona’s border with Mexico is made of 30-foot-tall steel poles filled with concrete. At a later date, lights and cameras will be installed, along with a sensor system.

Federal officials awarded a $1.28 billion border wall project in Southern Arizona to a company favored by President Donald Trump, five months after a previous contract led to accusations of improper influence and a probe by the Defense Department’s inspector general.

The Army Corps of Engineers awarded the $1.28 billion project on May 6 to Fisher Sand and Gravel, a North Dakota-based company with offices in Tempe.

The funds will go toward building about 42 miles of border wall, most of which will run from Nogales to the eastern boundary of the Tohono O’odham Nation, according to the Corps.

Tommy Fisher, head of Fisher Sand and Gravel, led a wide-ranging campaign to persuade Trump and federal officials to award wall contracts to his company.

When Trump told advisers last month that he wanted the wall painted black to make it more intimidating and harder to climb in hot weather, he directed them to consult with Fisher.

The inspector general audit came after Fisher Sand and Gravel was awarded a contract in early December worth up to $400 million to build 31 miles of border wall on the Cabeza Prieta National Wildlife Refuge southwest of Tucson.

News of the contract immediately led Democratic lawmakers to raise concerns about improper influence by Trump.

The Corps maintains that all procurement laws were followed with both the December contract award to Fisher and the May 6 award, says a statement from the Corps’ public affairs office.

In mid-2019, the company was included in a pre-qualified pool of contractors for border wall projects. The May 6 project was awarded to Fisher through a competitive process among those contractors.

Fisher Sand and Gravel did not respond to an inquiry from the Star.

The wall along Arizona’s border with Mexico is made of 30-foot-tall steel poles, known as bollards, filled with concrete. The bollards are 6 inches in diameter and separated from each other by 4 inches of space.

The wall is topped with a steel plate meant to thwart climbers. At a later date, lights and cameras will be installed, along with a sensor system in the ground.

The wall was a centerpiece of Trump’s presidential campaign in 2016, and officials are pushing to complete as many miles of wall as possible before the election in November.

Acting Department of Homeland Security Secretary Chad Wolf said last week during a visit to Tucson that he expects to see as many as 400 miles of wall completed this year. So far, about 180 miles have been built since Trump took office.

Federal officials plan to build nearly 140 miles of border wall near Tucson and another 100 miles near Yuma. Construction began last year and about 50 miles of wall have been built in Arizona, with crews adding more wall every day.

The May 6 project includes seven segments. The bulk of the project starts near Nogales and runs west for 38 miles along the Coronado National Forest and Buenos Aires National Wildlife Refuge until it reaches the eastern boundary of the Tohono O’odham Nation, with small breaks separating the segments.

Another 4 miles of wall will go up about 10 miles east of Nogales. A section of wall measuring two-tenths of a mile will go up at or near the Santa Cruz River.

A bridge was built over the river last year to help Border Patrol agents drive through the area.

Fisher Sand and Gravel also was awarded a $7.6 million contract on April 15 to build 800 feet of wall near Yuma.

The average cost per mile of the May 6 project is $30 million, much higher than the $20 million average for most other wall projects in Southern Arizona.

“While there may be similarities between projects, each project cost is contingent upon its unique characteristics, such as geotechnical, topographical, hydrological and hydraulic, underground utilities, final real estate access, and the cost of materials and labor,” said Corps spokesman Jay Field.

To speed up wall construction, the Department of Homeland Security waived numerous laws dealing with the environment, historical preservation, and other issues. In February, the department waived several procurement laws to further speed up construction on 177 miles of the border in California, Arizona, New Mexico and Texas.

The waivers of procurement laws “had no effect” on the May 6 award to Fisher Sand and Gravel, Field said, citing the competitive award process.

So far, roughly $3.1 billion of Defense Department funds have been awarded for wall projects on the border near Tucson, according to figures provided by the Corps. Only a handful of the planned miles of wall near Tucson do not yet have a contract.

Southwest Valley Constructors, an affiliate of the construction giant Kiewit, was awarded $524 million in late March to build about 24 miles of wall in Cochise County.

The company was awarded $1.3 billion last year to build 63 miles of wall in Cochise County and on the Organ Pipe Cactus National Monument and Cabeza Prieta.

In contrast with Fisher Sand and Gravel, Southwest Valley Constructors has kept a low profile in terms of publicly courting federal officials.

Nearly $700 million of Defense Department funds were awarded to build about 73 miles of wall in the Yuma area, according to the Corps.

Other projects near Yuma were funded by congressional appropriations.

North Dakota Gov. Doug Burgum is asking residents to avoid “mask shaming” people who are wearing protective gear because of the coronavirus.

A Mandan man is accused of firing several shots in the air outside a Main Street bar on Wednesday night. No one was hurt.

Authorities have identified a Mandan motorcyclist who was seriously injured while taking part in a Memorial Day group ride.

Conrad Anthony Pfleger, 64, passed away peacefully on May 24, 2020 surrounded by family.

A Mandan motorcyclist taking part in a Memorial Day group ride suffered serious injuries when he rear-ended another bike on Memorial Bridge.

David Lyle Wolf, 64, of Beulah, passed onto his next journey on May 21, 2020. A private celebration of life will be held.

Acting Department of Homeland Security Secretary Chad Wolf said last week during a visit to Tucson that he expects to see as many as 400 miles of wall completed this year.

The wall along Arizona’s border with Mexico is made of 30-foot-tall steel poles filled with concrete. At a later date, lights and cameras will be installed, along with a sensor system.