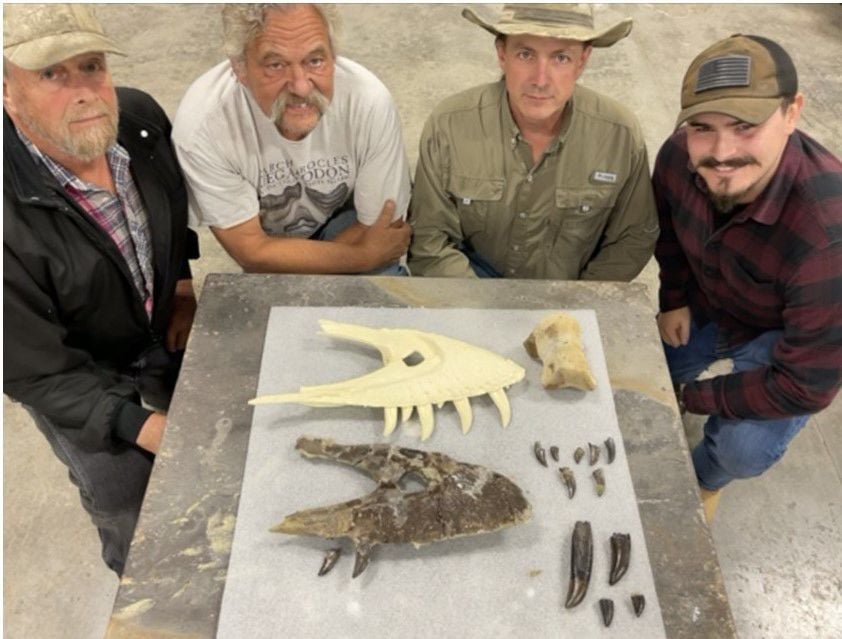 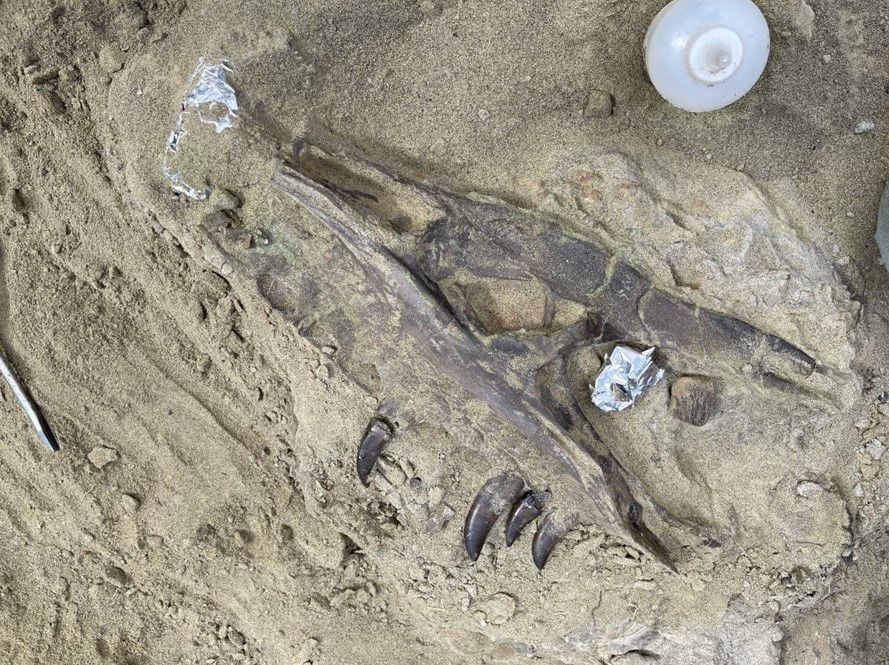 Paleontologists named this partial skull of a Nanotyrannus "Beautiful Nightmare." A Bowman-area dig site in the Badlands yielded the upper jawbone and other rare fossils.

Paleontologists have given the name "Beautiful Nightmare" to a rare dinosaur fossil thought to be the only partial skull of its species found in North Dakota.

"She is a beautiful example of her species, and she was a nightmare in her day to a lot of other critters," said Fossil Excavators President Mike Kjelland, an assistant professor of biology at Mayville State University.

The specimen, which includes an upper jawbone and lower teeth, is thought to be a Nanotyrannus, closely related to Tyrannosaurus rex. Only five Nano partial skulls have been found in the world, though there is debate about whether the fossils are instead of juvenile T. rex, Kjelland said.

Researchers uncovered the Nano and myriad other fossils -- some rare and potentially new species -- on private land at a remote Badlands canyon Kjelland found two years ago near Bowman while looking for the fossil-rich Hell Creek Formation. The site comprises an ancient river channel and sandbar.

The fossils, which date to 66-69 million years ago, comprise a diverse array of creatures from the Late Cretaceous, including two notable Triceratops skulls that drew national attention.

The site's landscape at the time was similar to a delta floodplain with intermittent rivers, swamps, riparian forested areas and uplands, Kjelland said.

He and a colleague found the Nanotyrannus upper jawbone at the site earlier this year, after a storm last fall exposed bones at the site.

Researchers also have uncovered turtle and fish fossils, as well as plant fossils including seeds, leaves and a huge piece of petrified wood.

The site "gives us a glimpse in time, and a geographic glimpse of very near the end of the age of dinosaurs," said Black Hills Institute of Geologic Research President Pete Larson, who received specimens from the site on Monday.

"This site has lots of parts and from a wide variety of animals, so that this gives us a glimpse of the ecology both at that particular moment in time and then that geographic area," Larson said.

Paleontologists can compare the site to similar ones to see differences in types of animal life, he said.

"The dinosaurs are a little bit different, and so we can see that even in this small area, the dinosaur diversity and dinosaur ecology tells us that the diversity over the world must have been much more diverse than just what this little tiny glimpse we see," said Larson, who disputes a theory of dwindling dinosaur diversity in the Late Cretaceous.

Dinosaur exhibits set for Bismarck, Dickinson to offer 'nicest you can see'

Another remarkable finding is a massive Oviraptorid. The creature was a large, birdlike dinosaur, known as "the chicken from hell," Kjelland and Larson said.

This specimen might have stood as tall as 7 feet at the hips. Researchers found arm, leg and foot bones.

Kjelland said the bones could form the largest Oviraptorid in North America. More bones could confirm it as a new species, he said.

Ideally, fossils from the site would be leased to a nearby museum for display, he said. Paleontology nonprofit Fossil Excavators is holding onto the specimens for now.

"These things are all quite significant, scientifically, especially when you get all of these things all together and you can get an idea of what the landscape looked like 66 million years ago," Burnham said.

The rare fossils are "always a treat for a paleontologist," he said.

"We know all about Triceratops and T. rex, but we know very little about giant raptors and Nanotyrannus, so that's new information for us," he said.

Fossils from the site also are well preserved, up to "excruciating detail in the bones," Burnham said. "That will make it important for study, and just the fact that it's a lot of rare things that we don't usually get."

Kjelland said the site is about the area of a football field, with plenty to dig into next spring and summer. He hopes researchers find more pieces of the Nanotyrannus and Oviraptorid.

"We just touched the surface of this site," he said.

Octopuses, crabs and lobsters have feelings too, a study found, prompting Britain to add them to the list of those protected by upcoming laws.

No toilet for returning SpaceX crew, who are stuck using diapers

The astronauts who will depart the International Space Station on Sunday will be stuck using diapers on the way home because of their capsule's broken toilet.

Paleontologists named this partial skull of a Nanotyrannus "Beautiful Nightmare." A Bowman-area dig site in the Badlands yielded the upper jawbone and other rare fossils. 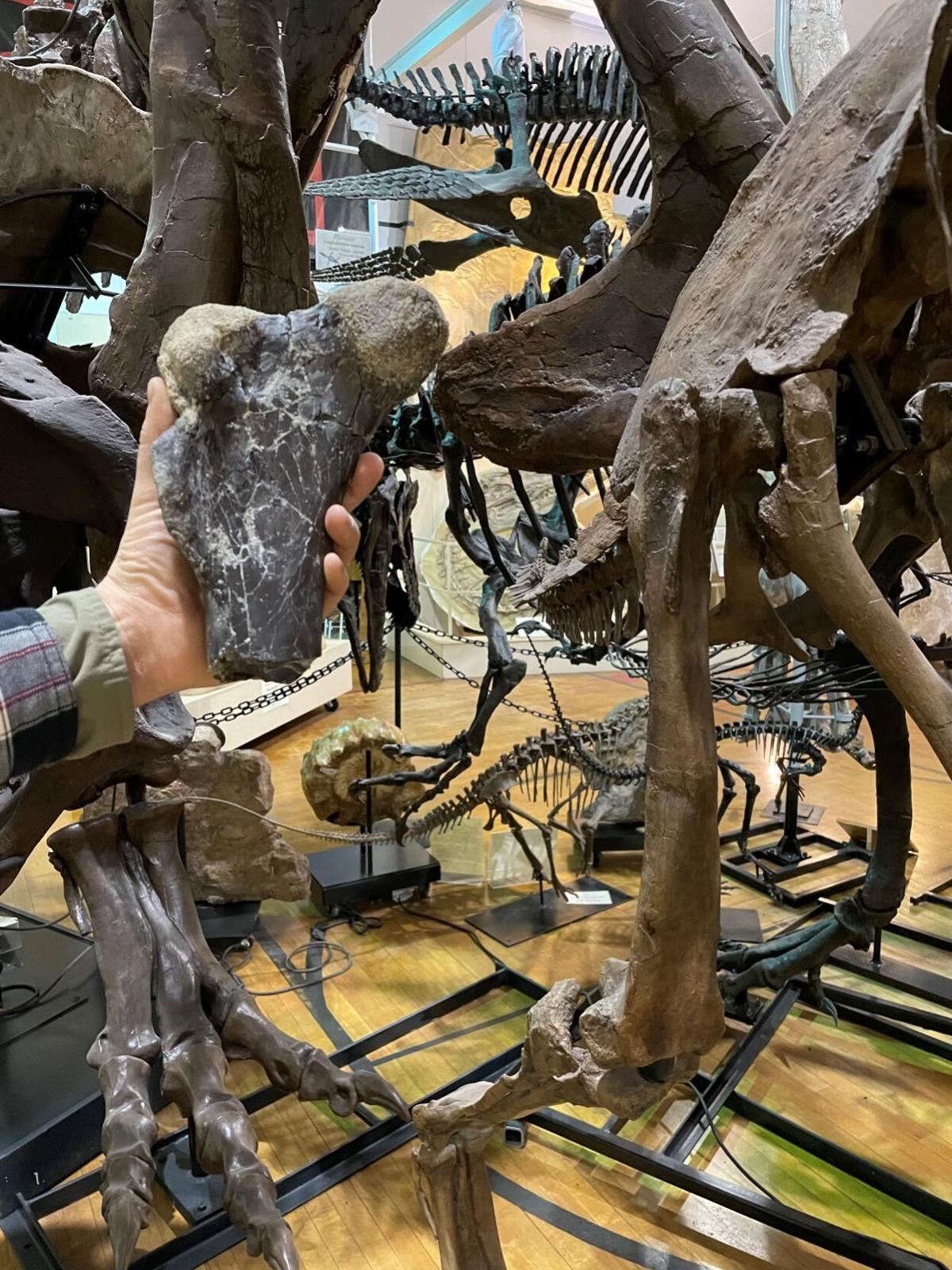 Fossil Excavators President Mike Kjelland compares a piece of a large Oviraptorid femur to a smaller specimen, Anzu wyliei, at the museum at the Black Hills Institute of Geologic Research.