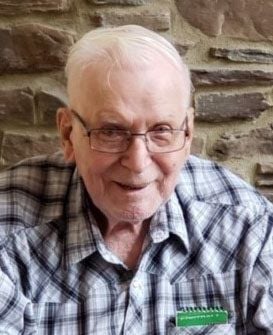 Morris Zahn, 92, passed away on July 27, 2020, surrounded by his family at Baptist Health, Bismarck. A small private service with immediate family will be held at 12:30 p.m. Thursday, July 30, at Good Shepherd Lutheran Church, Bismarck. For those wanting to watch the livestream service, it will be available at http://goodshepherdbismarck.com/ at the time of the service.

Morris was the fifth of six children born to Henry and Margaret Zahn in New England. He owned his own hay rack and two horses at the age of 14, and also hauled bundles of wheat for his dad. When Morris was 16, his dad got sick and could not farm so Morris quit school to put in the crop. At age 18, he went into the Army. Following his discharge from the Army, Morris farmed with his dad until 1951.

On June 24, 1951, Morris married Evonne Lutz of New England. They lived near Tee Pee Buttes and four years later the couple moved to their farm south of Bucyrus and began farming. Morris was a member of the ASC Board, the Reeder Church Council, and later the Hettinger Church Council, the Township Board and the Legion.

The couple retired and moved to Hettinger in 1995. Once in town, Morris enjoyed spending time with family, going to Cenex for coffee with friends and being a member of the Hettinger Lutheran Church.

In September 2015 Morris and Evonne moved into Edgewood Vista Village in Bismarck. They enjoyed living in Bismarck where they were close to Peggy. While at Edgewood they met new friends, enjoyed several music events each week and Morris participated in the Men's group. They looked forward to Sunday mornings when they attended worship services at Good Shepherd Lutheran Church with Peggy and Dave. Morris and Evonne celebrated 66 years of love until Evonne passed away Aug. 9, 2017.

To plant a tree in memory of Morris Zahn as a living tribute, please visit Tribute Store.