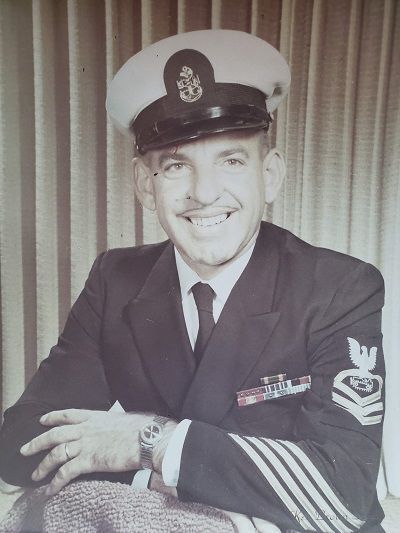 Harry H. Steckler joined his beloved wife Rita Julianna Scholl in heaven on Thursday, Nov. 5, 2020. Harry was born Hieronymous on March 13, 1929 to his German parents Ignatius known as Nathaniel “Nat” born in Russia and Frances Barth born in North Dakota. He was raised in North Dakota and worked on the family farm and share-farming. In 1947, he enlisted in the U.S. Navy.

Harry met his wife Rita Julianna Scholl at her sister's wedding where they were members of the wedding party. After returning from the Korean War, Harry told Rita that she had to enlist with him in order for him to finish his Navy career. They were married May 5, 1953. Harry and Rita had three sons during his Navy career: Larry, Duane, and Timothy.

Harry had many memorable tours including service at a Navy Transmitter Facility/Communications Station in Dixon, California; duty on the USS The Sullivans DD537; cross-rated to the SEABEES and was attached to Mobile Construction Battalion Eleven (NMCB 11) at Fort Hueneme, California deploying to Guam and Okinawa, Japan and Korea; in 1960 he was assigned to Amphibious Construction Battalion One (ACB-1), taking along Rita and the two oldest boys for an adventure living in Japan. After returning to the continental U.S., the family moved to Clarksville, Tennessee where Tim was born. When Harry volunteered for Operation DEEPFREEZE in the Antarctic, Rita and the boys stayed behind in Portland, Oregon. For his last tour, the entire family relocated to Litchfield Park, Arizona where Harry was the final service member serving and locking the gates of Litchfield Naval Air Facility. He retired as a Navy Chief Petty Officer after 21 years of service.

Harry regaled his family and friends with tales about his time on the USS The Sullivans DD537 named after the five brothers lost together at sea from the USS Juneau. Harry shared his tales of the Pacific and serving under enemy fire at sea during the Korean War. He also spoke fondly of his time as the personal driver for Admiral Arleigh Burke. Stories about the men who served during Operation DEEPFREEZE are documented in books and film.

After leaving the service, Harry began his next career eight days later. He was accepted as a deputy sheriff for Maricopa County in Phoenix, Arizona where he attained the rank of sergeant with over 26 years of service as a law enforcement officer in 1994. During his service he received numerous accolades while directing 41 officers and acting as a liaison for the Sheriff's Office with the Judiciary. His many stories included security of witnesses to the organized crime directed bombing of an Arizona Republic investigative reporter.

After retiring, Harry enjoyed a full life fishing, playing golf, walking and traveling with Rita and enjoying his growing family of grandchildren. Harry and Rita were active members of the Catholic Church throughout their lives and volunteers with St. Vincent de Paul. Harry and Rita were wonderful in the kitchen together.

He was an avid golfer and longtime fisherman. Harry is remembered for his adventurous nature including camping with his children and being able to relay excellent stories as well as a family card trick. His family recalls wonderful trips to visit the North Dakota relatives especially Aunt Francis and Uncle Manuel Stegmiller and exploring the farmlands. He enjoyed the accordion with Rita, loved to dance and cook with her, enjoyed a good game of shuffleboard, and was excellent at games. He had the best orange and tangerine trees in the family and was often visited for harvesting. Harry and Rita were very generous with their children and their grandchildren and they will forever be remembered for their kindness. He and Rita frequently said that their long marriage can be attributed to five words: “You Could Be Right Dear.” He was greatly loved and will be forever missed.

Harry was predeceased by his beloved wife Rita, his son Duane, his parents, his brothers Lawrence and Glen, sisters Veronica Carson, Gerri Cockran, Anastasia Tishmack, and Lorraine Miller as well as his grandchildren Timothy Jr., Stephen, and Michael. A celebration of Harry's life will be held 10:30 a.m. Tuesday, Oct. 26 at St. Joachim & St. Anne's Parish in Sun City, Arizona, followed by a 2:30 p.m. military honors service at the National Memorial Cemetery of Arizona. Former first responders and military are encouraged to wear their service dress uniforms in Harry's honor.