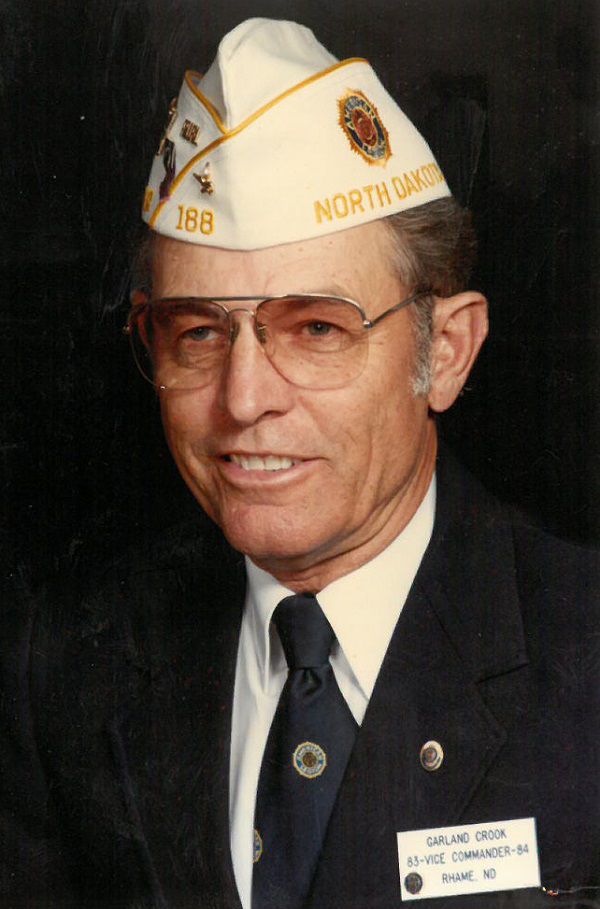 Hubert Garland Crook traveled to his eternal rest on Monday, May 25, 2020, while living at a long-term care facility in Mandan.

Garland was born at home in the Friendship neighborhood of Attalla County, Mississippi on Aug. 12, 1924 to Jasper Earl and Lena Belle (Ellis) Crook, the first of nine children. He attended primary school at Friendship School, learned shape-note singing at Friendship Church, and completed high school at nearby French Camp Academy. At eighteen, he was called to serve in World War II in the U.S. Army and was on the Normandy beaches on D-Day. Later he served as the personal driver to General Lee, and during this time in France and Germany he met many dignitaries including General Patton and the Duke of Windsor and the Duke's wife. On VE Day, the general asked him to stay on in Europe, but he said, “I'm going home!” After military service which included the Korean and Vietnam wars, he retired from the Army as Sergeant First-Class in June 1970.

He married Marian Silbernagel, of Rhame in 1951 and they traveled the world with their children in the U.S. Army life, including a few years they all lived in Okinawa. After his military retirement, they farmed and ranched in the Deep Creek Township of Slope County. He loved bluegrass music, football, and the outdoors, mostly gardening, camping, and his lifelong passion: fishing. He was very proud of his membership in the ND Walleye Whopper Club. He was a true handyman and held a wide variety of jobs in his long lifetime.

In 1986, he married Cheryl Hilden and they made their home in Mississippi, Dickinson, and more recently Bismarck. He was very committed to and had life memberships in The American Legion, Veterans of Foreign Wars, Disabled American Veterans and Forty et Eight. Through the years for these organizations he served on numerous committees, and held offices on the local, state, and national levels. He and Cheryl were members of Calvary Free Lutheran Church in Bismarck.

He was preceded in death by his parents Earl and Lena Belle, grandson, Craig Charles McLaughlin II, sisters and their husbands, Opal and Paul Pender and Edna Earl and Ruel Nix, his brother, James Crook, sister-in-law, Margaret Crook, and brothers-in-law, Mark Majovski and Dewitt Craft.

Due to the pandemic, services will be held at a later date and he will be buried at the North Dakota Veterans Cemetery near Mandan.

Memorials may be made to French Camp Academy, 1 Fine Place, French Camp, MS 39745-9989. Arrangements are being handled by Bismarck Funeral Home.

Bismarck neighbors: Obituaries for May 27

To plant a tree in memory of Garland Crook as a living tribute, please visit Tribute Store.