What's in a name? When it comes to Asian carp, quite a lot. For decades, that term has been used to describe four fish species that have infested many U.S. rivers and threaten to invade the Great Lakes. They were imported to cleanse fish farms and sewage ponds but escaped into the wild. Now …

TRAVERSE CITY, Mich. (AP) — Minnesota state Sen. Foung Hawj was never a fan of the "Asian carp" label commonly applied to four imported fish species that are wreaking havoc in the U.S. heartland, infesting numerous rivers and bearing down on the Great Lakes.

But the last straw came when an Asian business delegation arriving at the Minneapolis airport encountered a sign reading "Kill Asian Carp." It was a well-intentioned plea to prevent spread of the invasive fish. But the message was off-putting to the visitors.

Hawj and fellow Sen. John Hoffman in 2014 won approval of a measure requiring that Minnesota agencies refer to the fish as "invasive carp," despite backlash from the late radio commentator Rush Limbaugh, who ridiculed it as political correctness.

"I had more hate mail than you could shake a stick at," Hoffman said.

Now some other government agencies are taking the same step in the wake of anti-Asian hate crimes that surged during the coronavirus pandemic. The U.S. Fish and Wildlife Service quietly changed its designation to "invasive carp" in April.

"We wanted to move away from any terms that cast Asian culture and people in a negative light," said Charlie Wooley, director of its Great Lakes regional office.

The Asian Carp Regional Coordinating Committee, representing agencies in the U.S. and Canada that are trying to contain the carp, will do likewise Aug. 2, he said.

The moves come as other wildlife organizations consider revising names that some consider offensive, including the Entomological Society of America, which this month dropped "gypsy moth" and "gypsy ant" from its insect list.

Yet the switch to "invasive carp" might not be the final say. As experts and policymakers have learned in their long struggle against the prolific and wily fish, almost nothing about them is simple. Scientists, technical journals, government agencies, language style guides, restaurants and grocery stores may have ideas about what to call them, based on differing motives — including getting more people to eat the critters.

That's a priority for researchers who have spent years developing technologies to stem the incursion — from underwater noisemakers and electric currents to netting operations.

But the dish hasn't caught on with U.S. consumers, despite its popularity in much of the world. For many Americans, "carp" calls to mind the common carp, a bottom-feeder with a reputation for a "muddy" flavor and bony flesh.

"It's a four-letter word in this country," said Kevin Irons, assistant fisheries chief with the Illinois Department of Natural Resources.

The four species described collectively as Asian carp — bighead, silver, grass and black carp — were brought from China a half-century ago to rid Southern sewage and aquaculture ponds of algae, weeds and parasites. They escaped into the wild and have migrated up the Mississippi and other major rivers. The Great Lakes and their $7 billion sport fishery are vulnerable.

So far they've been netted mostly for bait, pet food and a few other uses. Philippe Parola, a Louisiana chef, trademarked the label "silverfin" for Asian carp fishcakes he developed around 2009.

The state of Illinois and partner organizations hope a splashy media campaign in the works will get bigger results. Dubbed "The Perfect Catch," it will describe Asian carp as "sustainably wild, surprisingly delicious" — high in protein and omega-3 fatty acids, low in mercury and other contaminants.

And it will give the fish a market-tested new name, which will remain secret until the makeover rollout, Irons said. A date hasn't been announced.

"We hope it will be new and refreshing and better represent these fish for consumers," he said.

The goal is to spur interest all along the chain — from commercial netters to processors, grocery stores and restaurants.

The tactic has worked before. After the U.S. National Marine Fisheries Service rechristened "slimehead" as "orange roughy" in the late 1970s, demand for the deep-sea dweller rose so sharply that some stocks were depleted. Chilean sea bass, another cold-water favorite, once was known less appealingly as "Patagonian toothfish."

But what new label for Asian carp will be considered official — "invasive carp," which has been criticized as imprecise, or whatever the marketing blitz comes up with?

It could be either. Or neither.

The rebranding campaign will seek U.S. Food and Drug Administration approval to use the new moniker for interstate commerce. But even if the FDA goes along and consumers buy in, scientists are another matter.

The American Society of Ichthyologists and Herpetologists and the American Fisheries Society have a committee that lists fish titles, including scientific names in Latin and common ones thought up by people "who originally described the species or included them in a field guide or other reference," said panel chairman Larry Page, curator of fishes at the Florida Museum of Natural History.

The committee has never adopted "Asian carp" as a term for the four invasive species, Page said.

So where did it come from? According to a paper in the journal Fisheries, the label began showing up in scientific literature in the mid-1990s and took hold in the early 2000s as worries about the fish grew.

It was never a good idea, said Patrick Kocovsky, a fish ecologist with the U.S. Geological Survey and one of the paper's authors, because the species affect the environment in different ways.

Song Qian, a University of Toledo environmental sciences professor who teamed with Kocovsky on the article, said carp is a valued protein source in many Asian nations. It's a good-luck symbol in his native China.

"If you say it's invasive, bad and needs to be eradicated, even though it's because of miscommunication, that's why there's talk about cultural insensitivity," Qian said.

It's most accurate to refer to the fish species individually, he said, acknowledging a collective name is sometimes convenient. The challenge now is finding the right one.

Regardless of which one eventually sticks, said Hawj, the Minnesota legislator, who immigrated to the U.S. from Laos as a child refugee after the Vietnam War, he's glad "Asian carp" is on its way out. He recalled the warm applause he received at an Asian-American conference after announcing his state had made the change.

"It's a nuisance, a small thing, but it can resonate greatly," he said.

Asian carp aren’t the only aquatic invaders to worry about. Here are 14 more

Engineers create device that can levitate objects with sounds.

What's in a name? When it comes to Asian carp, quite a lot. For decades, that term has been used to describe four fish species that have infes… 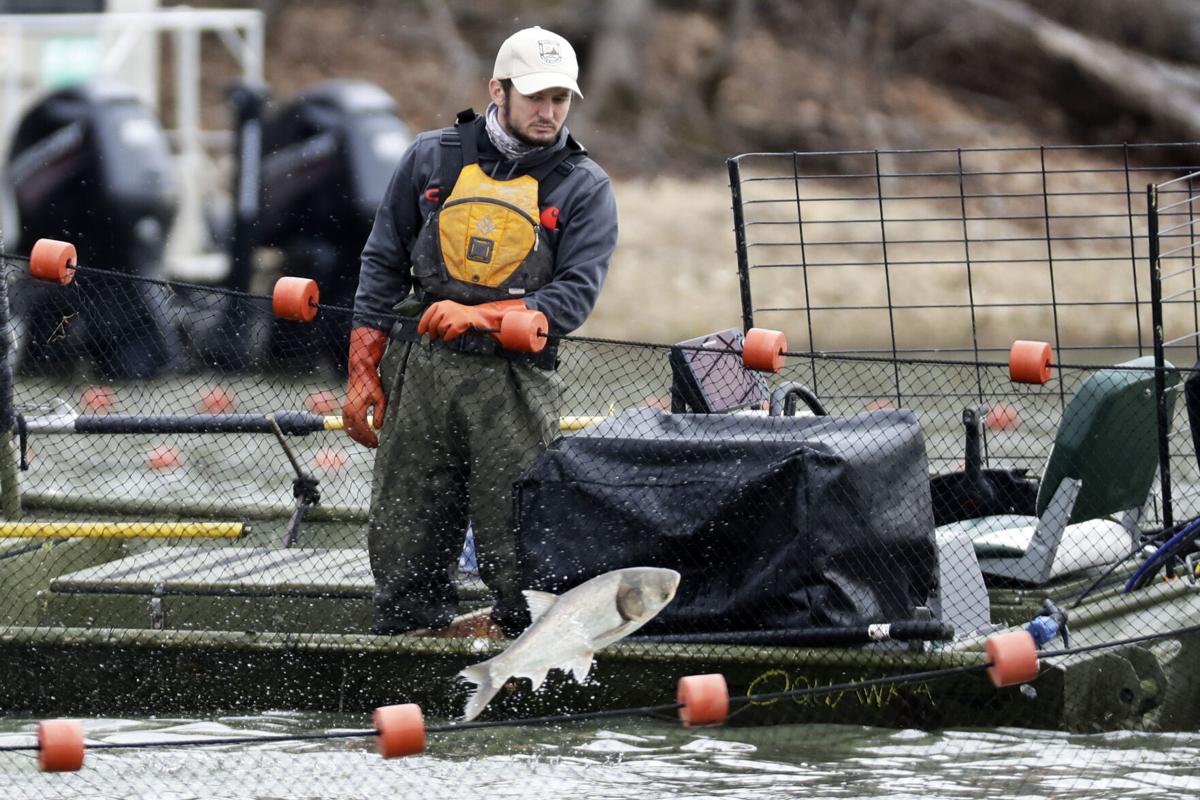 FILE - In this Feb. 17, 2020, file photo, a worker from a natural resource agency uses a net to drive Asian carp to a fish pump which removes them from Kentucky Lake near Golden Pond, Ky. Minnesota state Sen. Foung Hawj and fellow Sen. John Hoffman have won approval of a measure requiring that Minnesota agencies refer to the fish as "invasive carp." Now some other government agencies are taking the same step in the wake of anti-Asian hate crimes that surged during the coronavirus pandemic. The U.S. Fish and Wildlife Service quietly changed its designation to "invasive carp" in April. (AP Photo/Mark Humphrey, File) 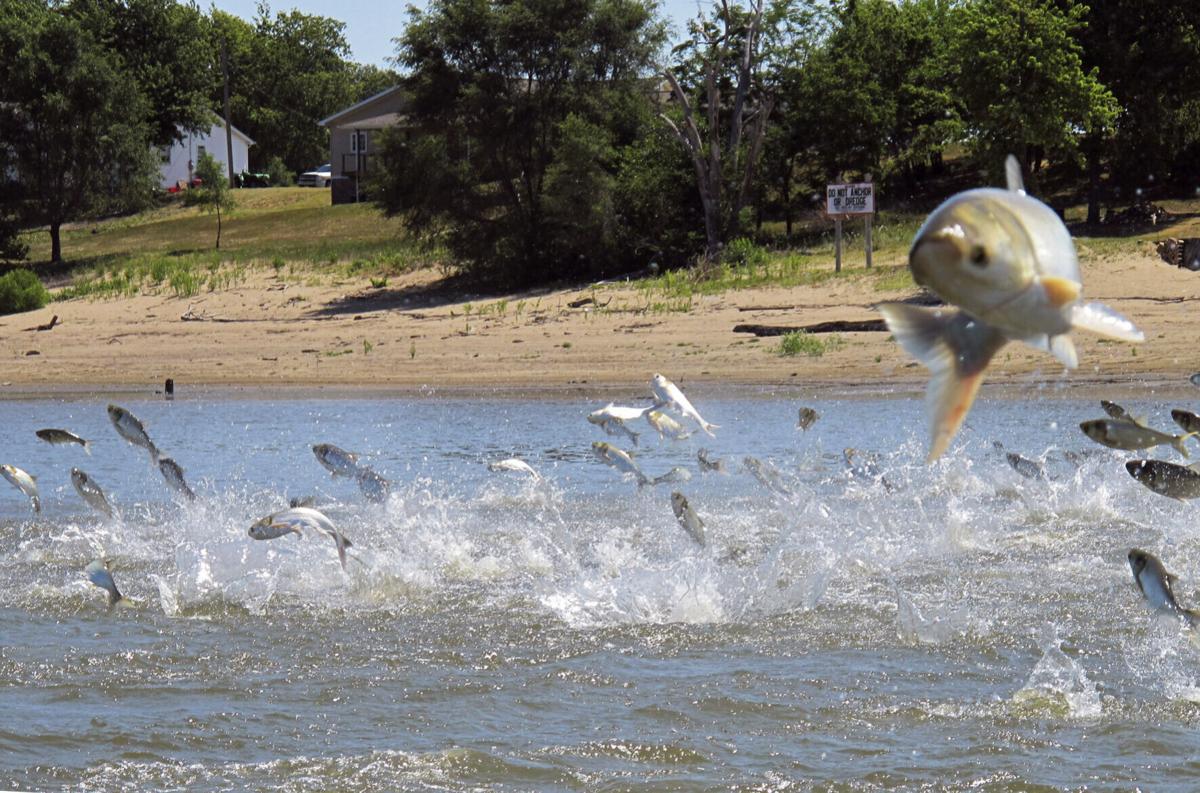 FILE - In this June 13, 2012, file photo, Asian carp, jolted by an electric current from a research boat, jump from the Illinois River near Havana, Ill. Minnesota state Sen. Foung Hawj and fellow Sen. John Hoffman have won approval of a measure requiring that Minnesota agencies refer to the fish as "invasive carp." Now some other government agencies are taking the same step in the wake of anti-Asian hate crimes that surged during the coronavirus pandemic. The U.S. Fish and Wildlife Service quietly changed its designation to "invasive carp" in April. (AP Photo/John Flesher, File)