Dozens of people have already been arrested and prosecutors across the U.S. have vowed to bring to justice those who stormed the U.S. Capitol on Wednesday, sending lawmakers into hiding as they began their work to affirm President-elect Joe Biden’s victory.

The top federal prosecutor for the District of Columbia has said “all options are on the table” for charging the rioters, many of whom were egged on by President Donald Trump’s speech hours earlier at a rally over his election loss. Investigators are combing through photos, videos and tips from the public to track down members of the violent mob.

A Capitol Police officer died after he was hit in the head with a fire extinguisher as rioters descended on the building and many other officers were injured. A woman from California was shot to death by Capitol Police and three other people died after medical emergencies during the chaos.

Some questions and answers about the investigation into the Capitol breach:

HOW MANY PEOPLE HAVE BEEN CHARGED?

The U.S. attorney’s office for D.C., which handles both local and federal cases in the district, had filed 17 cases in federal court and at least 40 others in the Superior Court by Saturday. The cases in Superior Court mainly have to do with things like curfew violations and gun crimes. Those being tried in federal court, where prosecutors can generally secure longer convictions, are charged with things like violent entry and disorderly conduct on Capitol grounds, assaulting a federal law enforcement officer and threatening House Speaker Nancy Pelosi.

Defendants facing federal charges include Richard Barnett, the Arkansas man shown in a widely seen photo sitting in Pelosi’s office with his boots on the desk. Barnett is charged with crimes including theft of public money, property or records.

Another man being tried in federal court, Lonnie Coffman of Falkville, Alabama, was arrested after authorities say they found guns and 11 Molotov cocktail explosive devices made out of mason jars, golf tees and cloth rags in his pickup truck.

A Florida man who was seen in photo shared widely on social media carrying the speaker of the House’s lectern was also arrested Friday. Adam Johnson faces charges including theft of government property.

Jacob Anthony Chansley, the man seen in photos dressed in horns, bearskin headdress and face paint, was taken into custody Saturday. The Arizona man has been charged with knowingly entering or remaining in any restricted building or grounds without lawful authority, and with violent entry and disorderly conduct on Capitol grounds.

Authorities have arrested an Iowa man, Doug Jensen, who appeared to be wearing a stocking cap and a QAnon T-shirt over a hooded sweatshirt. QAnon promotes the conspiracy theory that Trump is leading a secret campaign against “deep state” enemies and pedophiles. Video posted online showed a man who appears to be Jensen, who is white, pursuing a Black officer up an interior flight of stairs as a mob of people trails several steps behind.

WHY HAVEN’T MORE PEOPLE BEEN CHARGED YET?

Prosecutors say these charges are just the beginning. Authorities said Friday that said additional cases remained under seal and dozens of other people were being sought by federal agents.

U.S. attorneys in several states, including Kentucky, Ohio and Oregon, said people could face charges in their home states if they traveled to Washington and took part in the riot. The FBI has released photos of people inside the Capitol, urging the public to help identify them.

It takes time to build a case. Capitol Police arrested just more than a dozen people the day of the breach while D.C. police arrested around 70. Many people freely left the Capitol, which means investigators now have to work to identify them and track them down. Authorities have to distinguish between those who traveled to Washington only to participate in the rally before the riot versus those who were part of the insurrection at the Capitol. It can take weeks for investigators to go through photos and video, identify suspects, interview witnesses and write a complaint to secure an arrest.

Those who’ve been charged so far could also lead investigators to others who joined in the violent siege on Capitol Hill.

COULD THEY FACE MORE SERIOUS CHARGES?

Michael Sherwin, acting U.S. attorney for the District of Columbia, said this week that prosecutors are not keeping anything out of their “ arsenal for potential charges.” As prosecutors gather more evidence, they can add more charges against those they’ve already arrested.

Experts say federal prosecutors could bring rarely used seditious conspiracy charges against some of the rioters. In the wake of protests across the U.S. over police brutality this summer, then-Deputy Attorney General Jeffrey Rosen told prosecutors in September that they should consider using the sedition charge, which calls for up to 20 years in prison, against violent demonstrators. Rosen, who took over the top Department of Justice job when Attorney General William Barr stepped down last month, said the charge does not require proof of a plot to overthrow the U.S. government and gave the hypothetical example of a group that “has conspired to take a federal courthouse or other federal property by force.”

COULD TRUMP BE CHARGED?

Trump urged the crowd to march on the Capitol, even promising to go with them, though he didn’t in the end. The president told his supporters to “fight” to stop the “steal” of the election, while his personal lawyer, Rudy Giuliani, called for “trial by combat.”

But the legal bar for charging the president or any other speakers at the rally with inciting violence is high. Experts say it would be tough to prove that the president intended for violence to happen on Capitol Hill. Trump’s speech likely would not be considered illegally inciting violence because he didn’t specifically call for people to storm the Capitol, experts say.

The Federal Bureau of Investigation's Washington Field Office is seeking the public's assistance in identifying individuals suspected of making unlawful entry into the U.S. Capitol building on Wednesday.

Anyone with information regarding these individuals, or anyone who witnessed any unlawful violent actions at the Capitol or near the area, is asked to contact the FBI's Toll-Free Tipline at 1-800-CALL-FBI (1-800-225-5324) to verbally report tips. You may also submit any information, photos, or videos that could be relevant online at fbi.gov/USCapitol. You may also contact your local FBI office or the nearest American Embassy or Consulate.

FBI did not issue statement clearing Trump for Capitol insurrection

CLAIM: The FBI has cleared President Donald Trump “of any guilt, any connection” to the Jan. 6 attack on the Capitol. 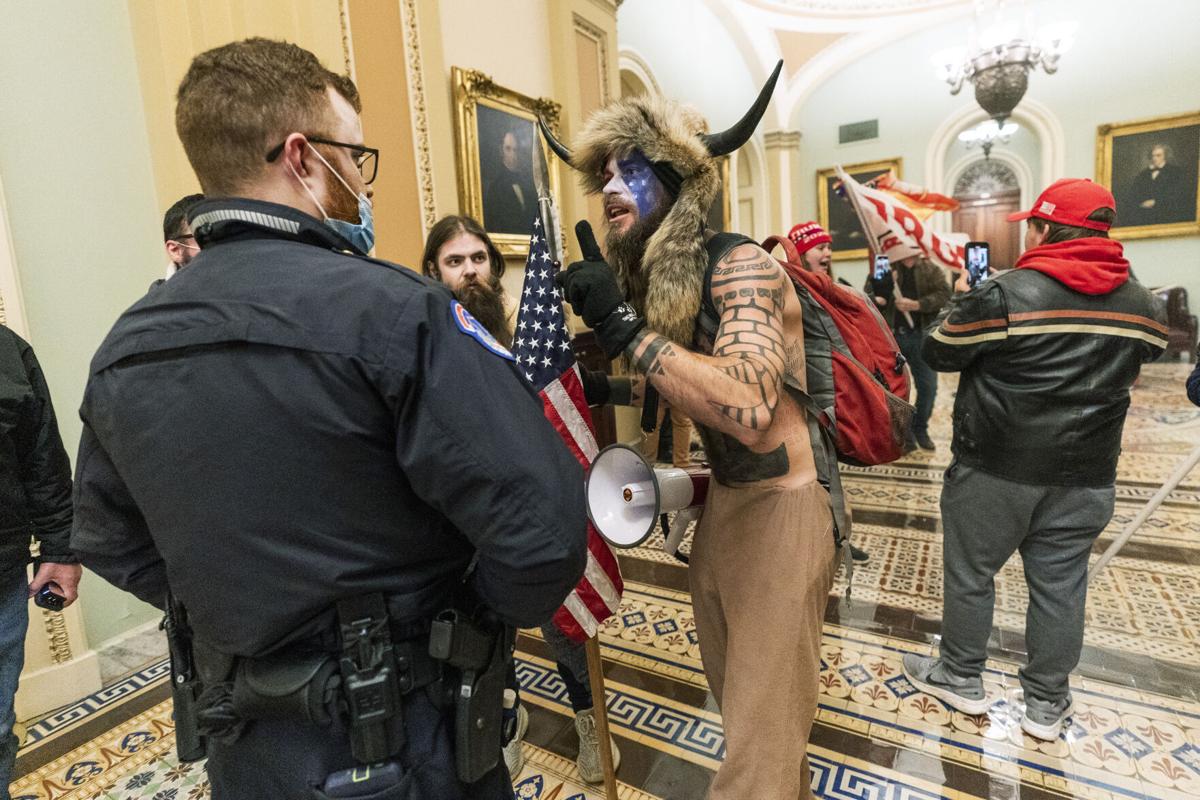 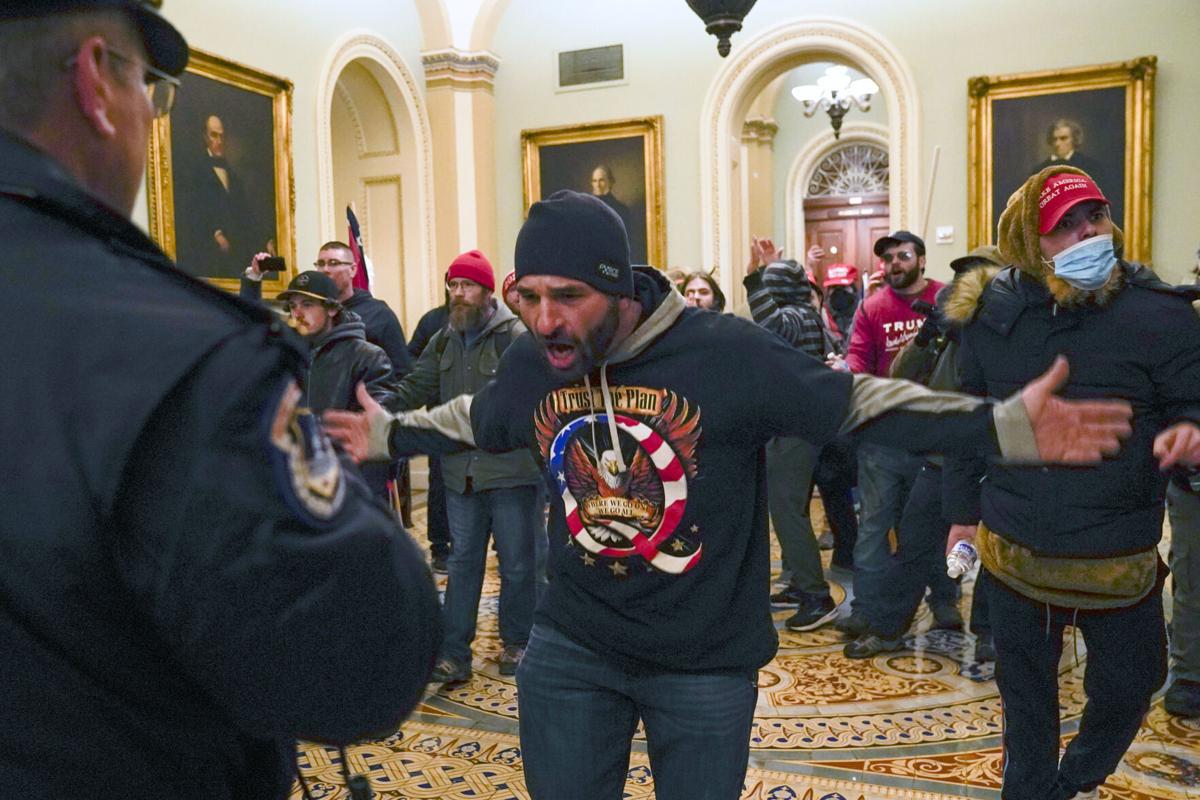 Trump supporters gesture to U.S. Capitol Police in the hallway outside of the Senate chamber at the Capitol in Washington, Wednesday, Jan. 6, 2021.