LAS VEGAS (AP) — Las Vegas is being flooded with lore about organized crime after a second set of human remains emerged within a week from the depths of a drought-stricken Colorado River reservoir just a 30-minute drive from the notoriously mob-founded Strip.

"There's no telling what we'll find in Lake Mead," former Las Vegas Mayor Oscar Goodman said Monday. "It's not a bad place to dump a body."

Goodman, as a lawyer, represented mob figures including the ill-fated Anthony "Tony the Ant" Spilotro before serving three terms as a martini-toting mayor making public appearances with a showgirl on each arm.

He declined to name names about who might turn up in the vast reservoir formed by Hoover Dam between Nevada and Arizona.

"I'm relatively sure it was not Jimmy Hoffa," he laughed. But he added that a lot of his former clients seemed interested in "climate control" — mob speak for keeping the lake level up and bodies down in their watery graves.

Instead, the world now has climate change, and the surface of Lake Mead has dropped more than 170 feet (52 meters) since 1983.

The lake that slakes the thirst of 40 million people in cities, farms and tribes across seven Southwestern states is down to about 30% of capacity.

"If the lake goes down much farther, it's very possible we're going to have some very interesting things surface," observed Michael Green, a University of Nevada, Las Vegas history professor whose father dealt blackjack for decades at casinos including the Stardust and the Showboat.

"I wouldn't bet the mortgage that we're going to solve who killed Bugsy Siegel," Green said, referring to the infamous gangster who opened the Flamingo in 1946 on what would become the Strip. Siegel was shot dead in 1947 in Beverly Hills, California. His assassin has never been identified.

"But I would be willing to bet there are going to be a few more bodies," Green said.

First, the dropping lake level exposed Las Vegas' uppermost drinking water intake on April 25, forcing the regional water authority to switch to a deep-lake intake it completed in 2020 to continue to supply casinos, suburbs and 2.4 million residents and 40 million tourists per year.

The following weekend, boaters spotted the decomposed body of a man in a rusted barrel stuck in the mud of newly exposed shoreline.

The corpse has not been identified, but Las Vegas police say he had been shot, probably between the mid-1970s and the early 1980s, according to the shoes found with him. The death is being investigated as a homicide.

A few days later, a second barrel was found by a KLAS-TV news crew, not far from the first. It was empty.

On Saturday, two sisters from suburban Henderson who were paddle boarding on the lake near a former marina resort noticed bones on a newly surfaced sand bar more than 9 miles (14.5 kilometers) from the barrels.

Lindsey Melvin, who took photos of their find, said they thought at first it was the skeleton of a bighorn sheep native to the region. A closer look revealed a human jaw with teeth. They called park rangers, and the National Park Service confirmed in a statement that the bones were human.

There was no immediate evidence of foul play, Las Vegas police said Monday, and they are not investigating. A homicide probe would be opened if the Clark County coroner determines the death was suspicious, the department said in a statement.

"I think a lot of these individuals will likely have been drowning victims," Schumacher said, referring to boaters and swimmers who've never been found. "But a barrel has a signature of a mob hit. Stuffing a body in a barrel. Sometimes they would dump it in the water."

He and Green both cited the death of John "Handsome Johnny" Roselli, a mid-1950s Las Vegas mobster who disappeared in 1976 a few days before his body was found in a 55-gallon (208-liter) steel drum floating off the coast of Miami.

David Kohlmeier, a former police officer who now co-hosts a Las Vegas podcast and fledgling TV show called "The Problem Solver Show," said Monday that after offering a $5,000 reward last week for qualified divers to find barrels in the lake, he heard from people in San Diego and Florida willing to try.

But National Park Service officials said that's not allowed, and that there are hundreds of barrels in the depths — some dating to the construction of Hoover Dam in the 1930s.

Kohlmeier said he also heard from families of missing people and about cases like a man suspected of killing his mother and brother in 1987, a hotel employee who disappeared in 1992, and a father from Utah who vanished in the 1980s.

"You'll probably find remains all throughout Lake Mead," Kohlmeier said, including Native Americans who were the area's earliest inhabitants.

Green said the discoveries have people talking not only about mob hits, but about bringing relief and closure to grieving families. Not to mention the ever-growing white mineral markings on steep lake walls showing where water used to be.

"People will talk about this for the right reasons and the wrong reasons," the professor said. "They're going to think we're going to solve every mob murder. In fact, we may see some.

The right reason, Green said, is the visible evidence that the West has a serious water problem. "The 'bathtub ring' around the lake is big and getting bigger," he said.

Whatever story emerges about the body in the barrel, Goodman predicted it will add to the lore of a city that, with lake water, sprouted from a creosote bush-covered desert to become a marquee gambling mecca.

"When I was the mayor, every time I went to a ground breaking, I'd begin to shake for fear that somebody I may have run into over the years will be uncovered," he said.

"We have a very interesting background," Goodman added. "It certainly adds to the mystique of Las Vegas."

What it’s like to visit Las Vegas right now

The Kentucky Derby, the escaped Alabama inmate and former prison officer, and more top stories from the last week

A tip among hundreds led police to Vicky White and Casey White. Her death leaves many questions

Vicky White's death leaves many questions after a week-long manhunt that started in Alabama and ended with an Indiana crash. Here's the latest.

Inside the manhunt for an escaped murder suspect and jailer

U.S. Marshal Marty Keely gives the most detailed account to date of the nationwide manhunt that ended with Vicky White dead and Casey White back in custody.

The baby formula shortage: What parents should know

Here's what parents should know as the baby formula shortage worsens in parts of the U.S.

A woman's voice — which authorities say is Vicky White's — is heard saying things including, "wait, stop ... airbags going to go off and kill us."

Ashley Judd and her family wanted the world to hear from them how Naomi Judd died. The younger Judd shared the cause of death on "Good Morning America."

Alabama inmate, jailer were prepared for a shootout, sheriff says

An Indiana sheriff says the Alabama inmate and jailer who evaded authorities for more than a week were heavily armed and preparing for a shootout.

UPDATE: Authorities say a former Alabama jail official has died and the murder suspect she is accused of helping escape from custody has been apprehended in Indiana after more than a week on the run.

Astronomers have unveiled the first wild but fuzzy image of the supermassive black hole at the center of our own Milky Way galaxy. 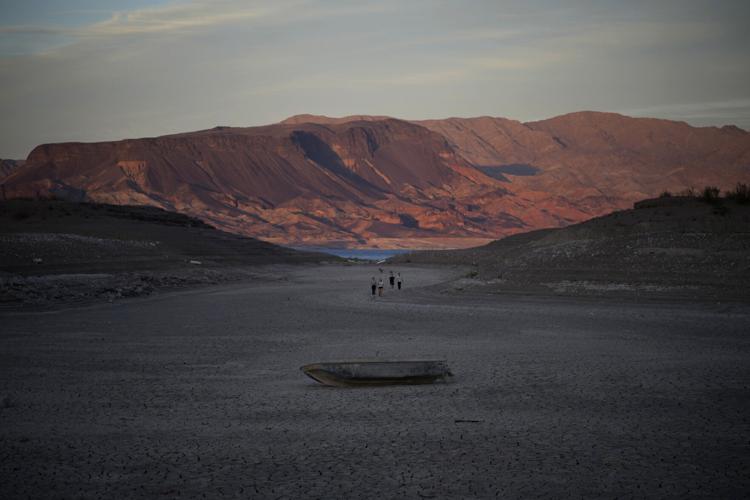 A formally sunken boat sits on cracked earth hundreds of feet from what is now the shoreline on Lake Mead at the Lake Mead National Recreation Area, Monday, May 9, 2022, near Boulder City, Nev. Lake Mead is receding and Sin City is awash with mob lore after a second set of human remains emerged within a week from the depths of the drought-stricken Colorado River reservoir just a short drive from the Las Vegas Strip.

These photos of Saturday, May 7, 2022, provided by Lindsey Melvin of Henderson, Nev., shows human remains she and her sister discovered on a sandbar that recently surfaced as Lake Mead recedes. A closer look revealed a human jaw with teeth. The National Park Service confirmed in a statement that the bones are human. 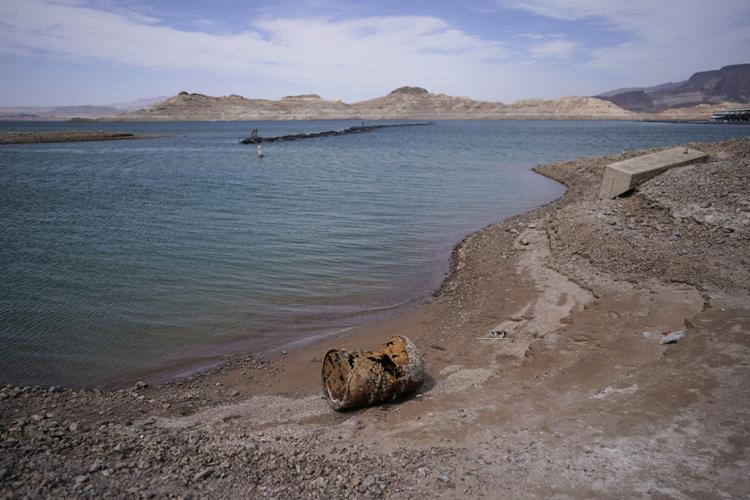 Rusting debris that used to be underwater sits above the water level on Lake Mead at the Lake Mead National Recreation Area, Monday, May 9, 2022, near Boulder City, Nev. 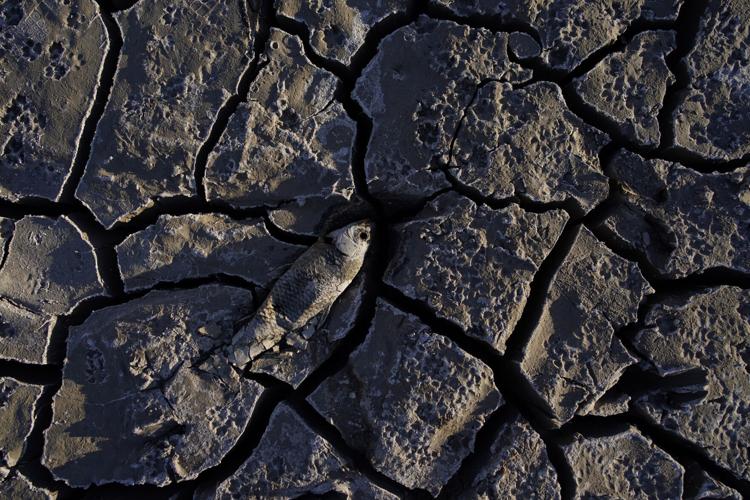 A dead fish that used to be underwater sits on cracked earth above the water level on Lake Mead at the Lake Mead National Recreation Area, Monday, May 9, 2022, near Boulder City, Nev. 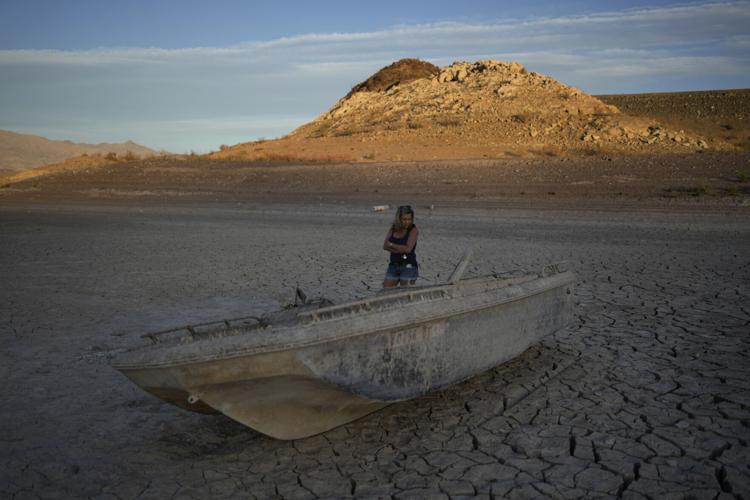 Misha McBride looks at a formally sunken boat now on cracked earth hundreds of feet from what is now the shoreline on Lake Mead at the Lake Mead National Recreation Area, Monday, May 9, 2022, near Boulder City, Nev. 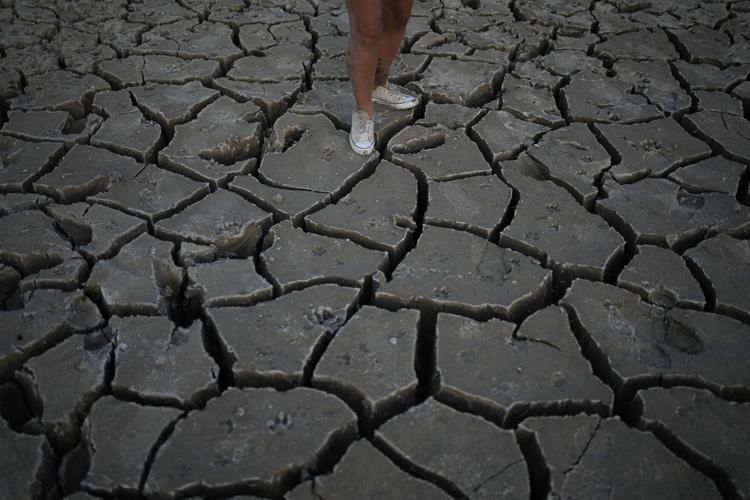 Misha McBride stands on cracked earth that was once underwater near Lake Mead at the Lake Mead National Recreation Area, Monday, May 9, 2022, near Boulder City, Nev. 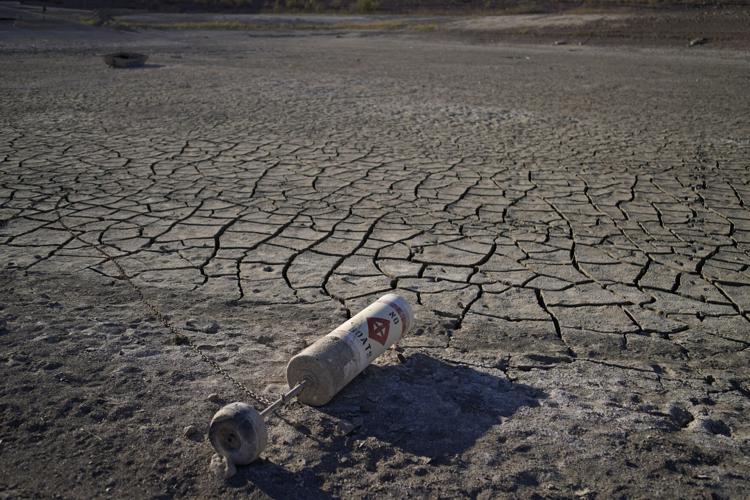 A formally floating buoy lies on cracked earth hundreds of feet from what is now the shoreline on Lake Mead at the Lake Mead National Recreation Area, Monday, May 9, 2022, near Boulder City, Nev.