Trump announced Coats' departure on Aug. 15 in a tweet Sunday that thanked Coats for his service. He said he will nominate Rep. John Ratcliffe, R-Texas, to the post and that he will name an acting official in the coming days. Ratcliffe is a frequent Trump defender who fiercely questioned former special counsel Robert Mueller last week during a House Judiciary Committee hearing.

Coats often appeared out of step with Trump and disclosed to prosecutors how he was urged by the president to publicly deny any link between Russia and the Trump campaign. The frayed relationship reflected broader divisions between the president and the government's intelligence agencies.

I am pleased to announce that highly respected Congressman John Ratcliffe of Texas will be nominated by me to be the Director of National Intelligence. A former U.S. Attorney, John will lead and inspire greatness for the Country he loves. Dan Coats, the current Director, will....

personal, disagreements with Trump over policy and intelligence included Russian election interference and North Korean nuclear capabilities. Trump had long been skeptical of the nation's intelligence community, which provoked his ire by concluding that Russia interfered in the 2016 presidential election with the goal of getting him elected.

A former Republican senator from Indiana, Coats was appointed director of National Intelligence in March 2017, becoming the fifth person to hold the post since it was created in the wake of the Sept. 11, 2001, attacks to oversee and coordinate the nation's 17 intelligence agencies.

Coats had been among the last of the seasoned foreign policy hands brought to surround the president after his 2016 victory, of whom the president steadily grew tired as he gained more personal confidence in Oval Office, officials said. That roster included Defense Secretary Jim Mattis and Secretary of State Rex Tillerson, and later national security adviser H.R. McMaster.

Coats developed a reputation inside the administration for sober presentations to the president of intelligence conclusions that occasionally contradicted Trump's policy aims.

His departure had been rumored for months, and intelligence officials had been expecting him to leave before the 2020 presidential campaign season reached its peak.

Trump's announcement that Coats would be leaving came days after Mueller's public testimony on his two-year investigation into Russian election interference and potential obstruction of justice by Trump, which officials said both emboldened and infuriated the president.

Coats had been among the least visible of the president's senior administration officials but, in his limited public appearances, repeatedly seemed at odds with the administration, including about Russia.

For instance, he revealed to Mueller's investigators how Trump, angry over investigations into links between his campaign and Russia, tried unsuccessfully in March 2017 to get him to make a public statement refuting any connection.

"Coats responded that the Office of the Director of National Intelligence (ODNI) has nothing to do with investigations and it was not his role to make a public statement on the Russia investigation," Mueller's report said.

In February, he publicly cast doubt on the prospects of persuading North Korea to end its nuclear weapons program despite the diplomatic efforts of the administration, which has touted its outreach to the isolated country as one of its most important foreign policy achievements.

Coats, in testimony to Congress as part of annual national intelligence assessment, said North Korea would be "unlikely" to give up its nuclear weapons or its ability to produce them because "its leaders ultimately view nuclear weapons as critical to regime survival."

Trump publicly bristled at the testimony of Coats, the head of the CIA and other officials who contradicted his own positions on Iran, Afghanistan and the Islamic State group as well as North Korea. The intelligence officials were "passive and naive," he said in a tweet.

Last July, Coats and the president appeared at odds following Trump's widely panned news conference in Helsinki alongside Russian President Vladimir Putin. Trump said he saw no reason to believe Russia had interfered in the 2016 election, drawing bipartisan criticism and a rebuttal from his intelligence chief.

"We have been clear in our assessments of Russian meddling in the 2016 election and their ongoing, pervasive efforts to undermine our democracy, and we will continue to provide unvarnished and objective intelligence in support of our national security," Coats said.

The president later said he misspoke in Helsinki.

That same month, Coats appeared to scoff when told in an interview that Trump had invited Putin to Washington.

"Say that again," Coats said, cupping his hand over his ear on live television. He took a deep breath and continued: "OK. That's going to be special."

He later said his comments at the Aspen Security Forum in Colorado were "in no way meant to be disrespectful or criticize the actions of the president."

In December, Coats said he was "deeply saddened" when Mattis resigned in protest of Trump's foreign policy, including the decision to withdraw American troops from Syria. Coats called Mattis a "national treasure" who "will be sorely missed."

In a tweet, Trump praised Ratcliffe: "A former U.S. Attorney, John will lead and inspire greatness for the Country he loves."

John Hinckley to be released from oversight

John Hinckley to be released from oversight

Watch Now: Phone apps that help you during natural disasters

Watch Now: Phone apps that help you during natural disasters

Matthew McConaughey is still considering a run for political office.

Pennsylvania residents who are unvaccinated against the coronavirus were far more likely to contract COVID-19, become hospitalized and die than those who got the shot, health officials said Tuesday in the first public release of data on so-called “breakthrough" infections in the state.

OLYMPIA, Wash. (AP) — Washington Gov. Jay Inslee said Thursday the state’s eviction protections will remain in place through the end of October because counties aren’t getting federal and state COVID-19 relief funds intended for rental assistance out fast enough ahead of the current moratorium that was set to expire Sept. 30.

NEW YORK (AP) — Vice President Kamala Harris' live interview on “The View” was abruptly delayed Friday after two hosts of the talk show learned they had tested positive for COVID-19 moments before Harris was to join them on the set.

Bush to headline fundraiser for Cheney after Trump backs foe

NEW YORK (AP) — Former President George W. Bush will headline a fundraiser next month for top Donald Trump critic Liz Cheney, turning her reelection race into a proxy war of sorts between the ex-presidents who represent two competing factions of the Republican Party.

Ancient tablet acquired by Hobby Lobby going back to Iraq

WASHINGTON (AP) — A 3,500-year-old clay tablet discovered in the ruins of the library of an ancient Mesopotamian king, then looted from an Iraqi museum 30 years ago, is finally headed back to Iraq.

WASHINGTON (AP) — A House committee investigating the Jan. 6 insurrection at the U.S. Capitol has issued its first subpoenas, demanding records and testimony from four of former President Donald Trump's close advisers and associates who were in contact with him before and during the attack.

NEW YORK (AP) — Two Canadians detained in China on spying charges were released from prison and flown out of the country on Friday, Prime Minister Justin Trudeau said, just after a top executive of Chinese communications giant Huawei Technologies reached a deal with the U.S. Justice Department over fraud charges and flew to China. 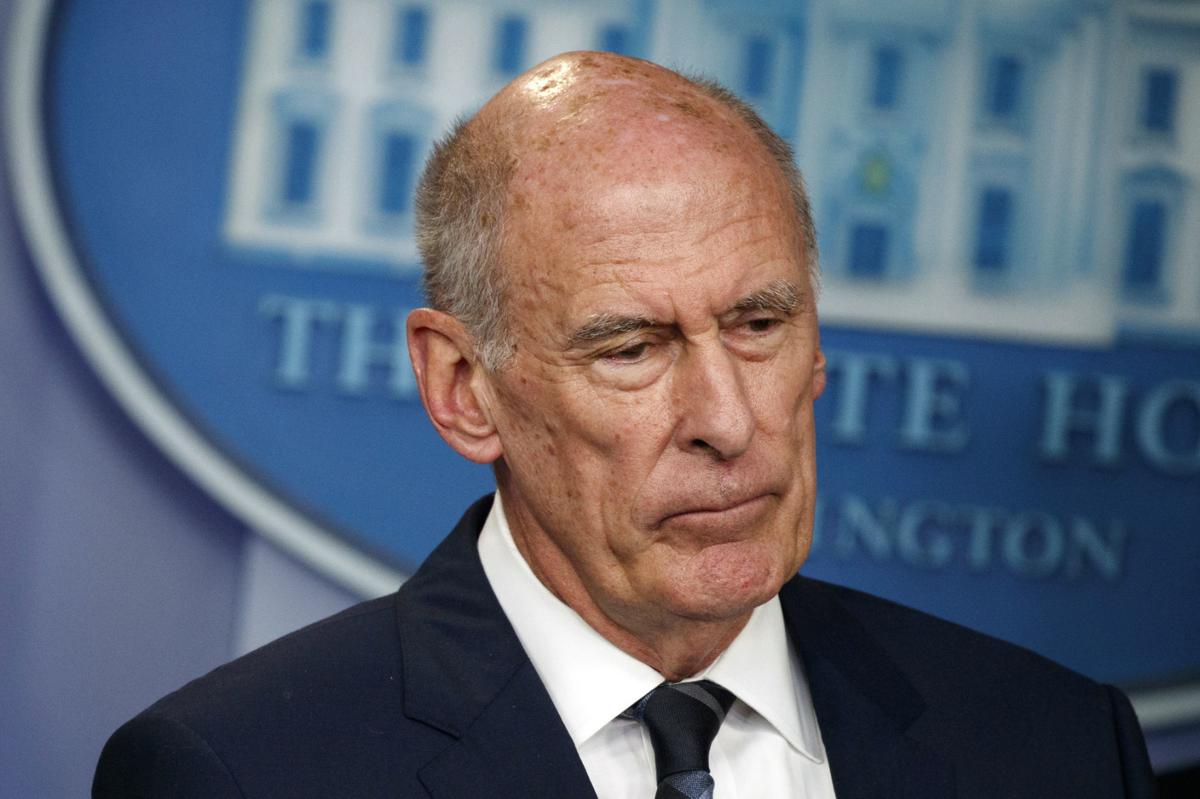 In this Aug. 2, 2018, file photo, Director of National Intelligence Dan Coats listens during a daily press briefing at the White House in Washington. Coats is to resign in days, after a two-year tenure marked by President Donald Trump's clashes with intelligence officials, U.S. officials said on Sunday, July 28, 2019. (AP Photo/Evan Vucci, FIle) 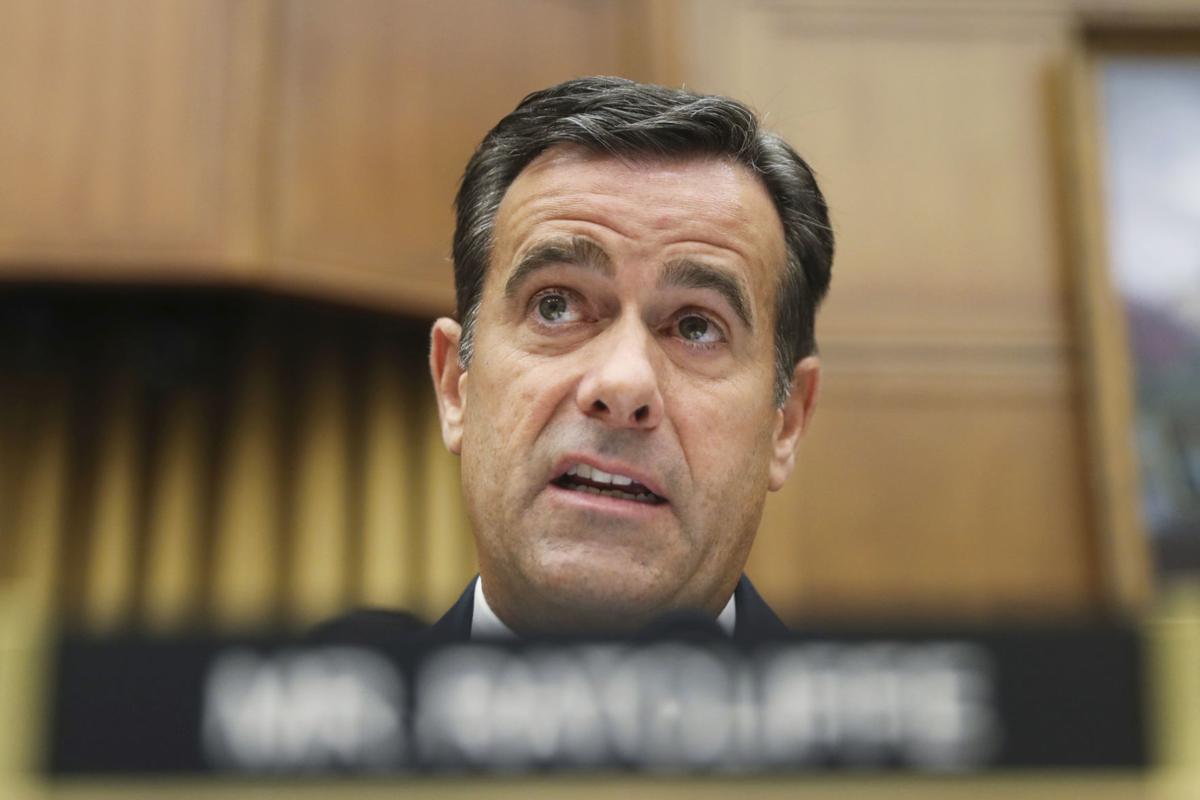 In this Wednesday, July 24, 2019, file photo, Rep. John Ratcliffe, R-Texas., questions former special counsel Robert Mueller as he testifies before the House Intelligence Committee hearing on his report on Russian election interference, on Capitol Hill in Washington. President Donald Trump tweeted Sunday that the nation’s top intelligence official would step aside on Aug. 15, and that he would nominate Rep. John Ratcliffe to the post, following a report Director of National Intelligence Dan Coats is leaving his job next month. (AP Photo/Andrew Harnik, File)