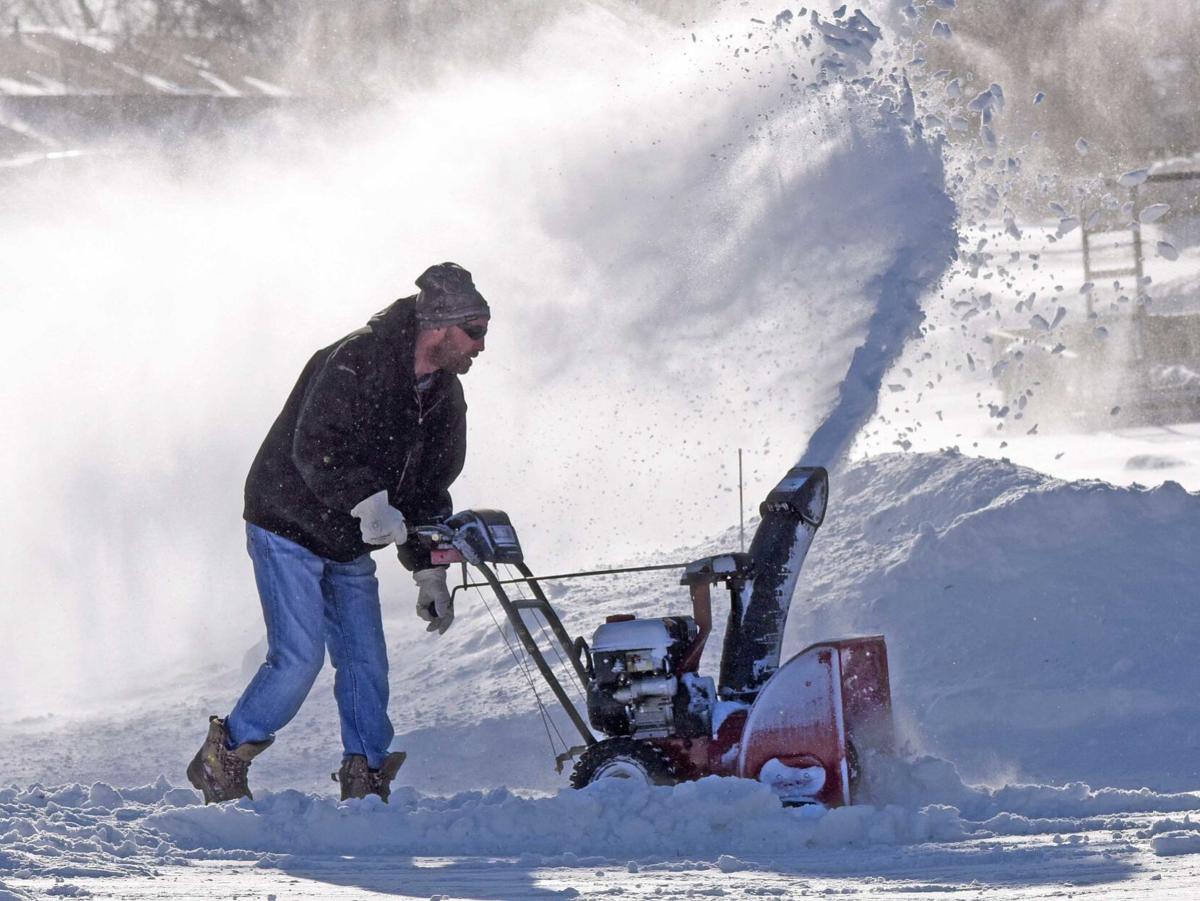 Jason Heidt stays upwind while blowing snow in east Bismarck on Monday morning. "I had a 3-foot drift in front of my garage," he said. 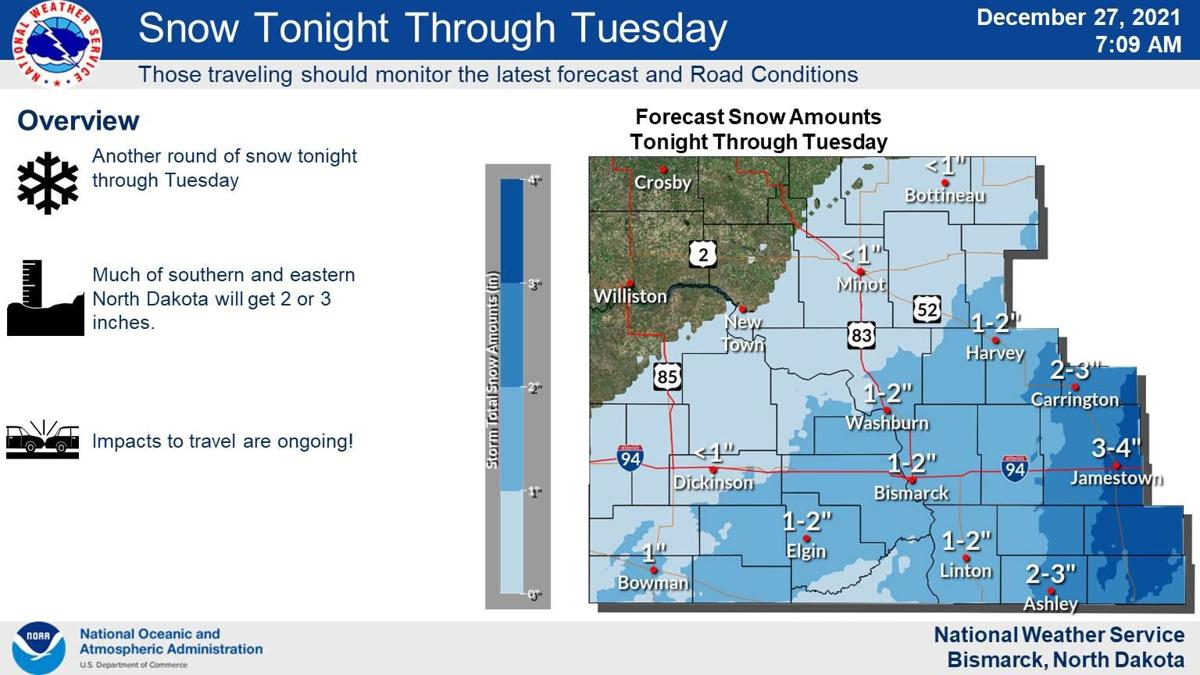 A winter storm that dumped heavy snow in North Dakota over the Christmas holiday weekend snarled travel, prompted closures as the workweek began and ushered in frigid Canadian air that will linger into the upcoming New Year's holiday weekend.

Interstate 94 between Bismarck and Fargo was shut down for much of Monday, but it was fully reopened by late afternoon. I-29 from Grand Forks to the Canada border reopened Monday morning, along with several stretches of U.S. Highway 2 across northern North Dakota. I-29 between Grand Forks and the South Dakota border was opened in stages in the afternoon.

No travel was advised throughout much of the state when the day began, but by midday the advisories were only in the southeast and in Red River Valley counties, and those were lifted by late afternoon. Before the interstates were reopened, Highway Patrol Capt. Bryan Niewind urged motorists to stay off secondary roads in weather-impacted areas, saying it was resulting in law enforcement spending resources on rescuing stranded motorists.

For updated information on road conditions, go to travel.dot.nd.gov.

The Bismarck State College and University of Mary campuses closed. Public schools in Bismarck-Mandan are on Christmas break.

Some state Motor Vehicle offices closed or altered hours, mainly in the east. The office in Beulah closed. The state Department of Human Services also shut down some offices or changed hours. The West Central Human Service Center in Bismarck as well as the regional child support and vocational rehabilitation offices didn't open until the afternoon.

A couple of incoming and departing flights at the Bismarck Airport were delayed or canceled, but most flights were listed as being on time. The Associated Press reported that flight disruptions around the globe are due to weather and also the impacts of the new omicron variant of the coronavirus.

The storm brought heavy snow, strong winds and dangerously cold wind chills to the state. The National Weather Service posted a blizzard warning for the southeast and a winter storm warning for the rest of the east and for central North Dakota, though by late afternoon Monday the agency had replaced them with cautions about frigid temperatures.

Weather service snow reports from Sunday through early Monday were as high as 12.8 inches in Pingree, in Stutsman County. Bismarck's total was 7.7 inches.

Snowfall in Bismarck from Saturday through early Monday totaled a little more than a foot, according to weather service Meteorologist Zack Hargrove.

The capital city's winter season total of 17.8 inches as of early Monday was more than the total of 16.7 inches for all of last winter, according to the weather service. Another 1-3 inches was expected in the region Monday night through Tuesday, but with lesser wind.

"This is just a little weak wave coming through," Hargrove said.

"Crews had to replow the emergency routes and major arterial streets due to additional snowfall and blowing and drifting snow conditions," Service Operations Director Jeff Heintz said in a midday statement.

Residents were urged to get parked vehicles off the street, and reminded that clearing snow around mailboxes and garbage bins is the responsibility of property owners, not the city. Residents also were asked to help clear snow from around fire hydrants.

The city will be removing snow in the Bismarck downtown “No Parking – Street Cleaning” areas Wednesday and Thursday, from 12:01-7 a.m. North-south streets and alleys will be done Wednesday, and east-west streets and alleys Thursday. Vehicles parked on the streets during that time will be towed at the owner’s expense.

The moisture is welcome -- the U.S. Drought Monitor map continues to show two-thirds of North Dakota as being in some form of drought, with much of the western half of the state in severe drought and the northwestern corner in extreme drought. The map is updated every Thursday with data through the preceding Tuesday, meaning the weekend snowfall will be reflected on this week's map.

The U.S. Drought Monitor is a partnership of the National Oceanic and Atmospheric Administration, the U.S. Department of Agriculture and the National Drought Mitigation Center at the University of Nebraska-Lincoln.

Daytime high temperatures this week will struggle to get above zero in much of the state, with overnight lows as cold as 30 below. The coldest air will be in northern North Dakota, but "We'll get our share of pretty frigid conditions here in Bismarck, too," Hargrove said.

The high in Bismarck-Mandan on New Year's Eve on Friday is forecast around minus 10 degrees. Bismarck's Dec. 31 record for lowest maximum temperature is minus 13 degrees, set in 1973, according to weather service data.

"It wouldn't surprise me if we ended up breaking a few records in a few places ... but we're still not talking about abnormal cold for this time of year," Hargrove said, adding that last year's mild winter might make this week's conditions seem colder.

"This prolonged cold snap, it's something we obviously haven't experienced a lot here lately," he said.

Dangerous and even life-threatening wind chills in the minus 30s and 40s are expected through New Year's Day on Saturday. Exposed skin can freeze within minutes in such conditions, according to the weather service.

A week of bitter cold and heavy snow in North Dakota will culminate with a frigid New Year's Eve but give way to a dramatic warmup on Sunday.

Gucci is under fire for using real tigers in ad campaign

Blinken, in Ukraine, calls on Putin to choose 'peaceful path' or face 'consequences'

Blinken, in Ukraine, calls on Putin to choose 'peaceful path' or face 'consequences'

A look inside the bubble for the 2022 Beijing Olympics

A look inside the bubble for the 2022 Beijing Olympics

Jason Heidt stays upwind while blowing snow in east Bismarck on Monday morning. "I had a 3-foot drift in front of my garage," he said. 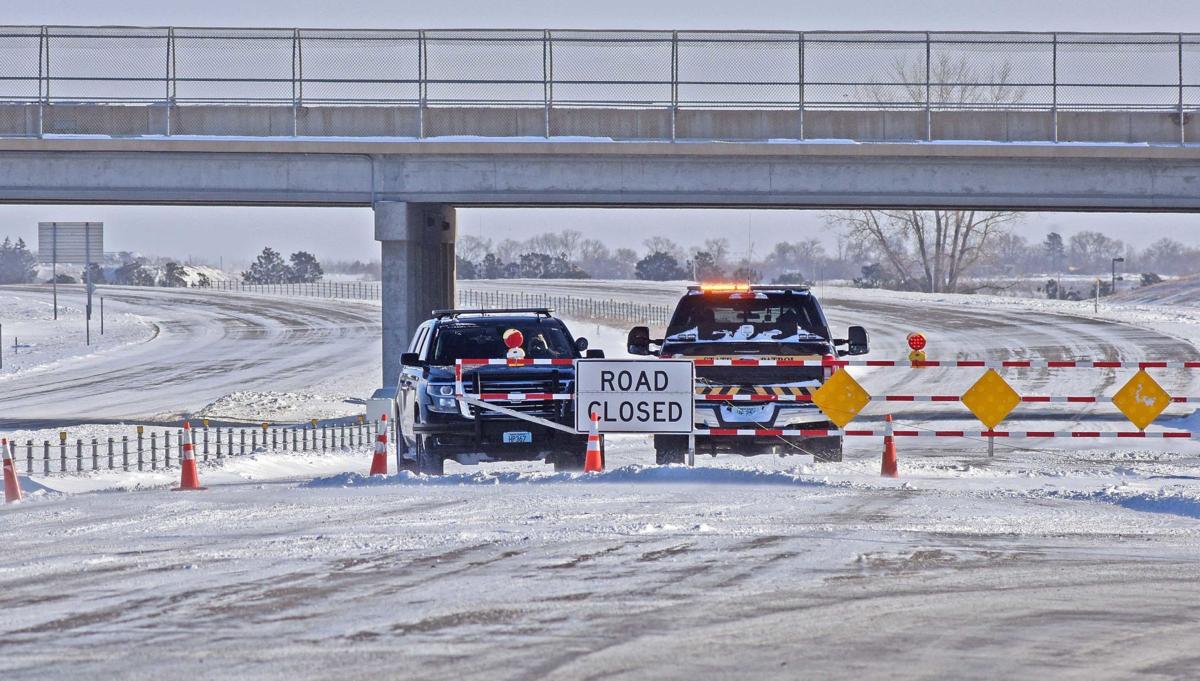 North Dakota Highway Patrol officers monitor the closure of Interstate 94 at the mile 161 exit in east Bismarck on Monday. 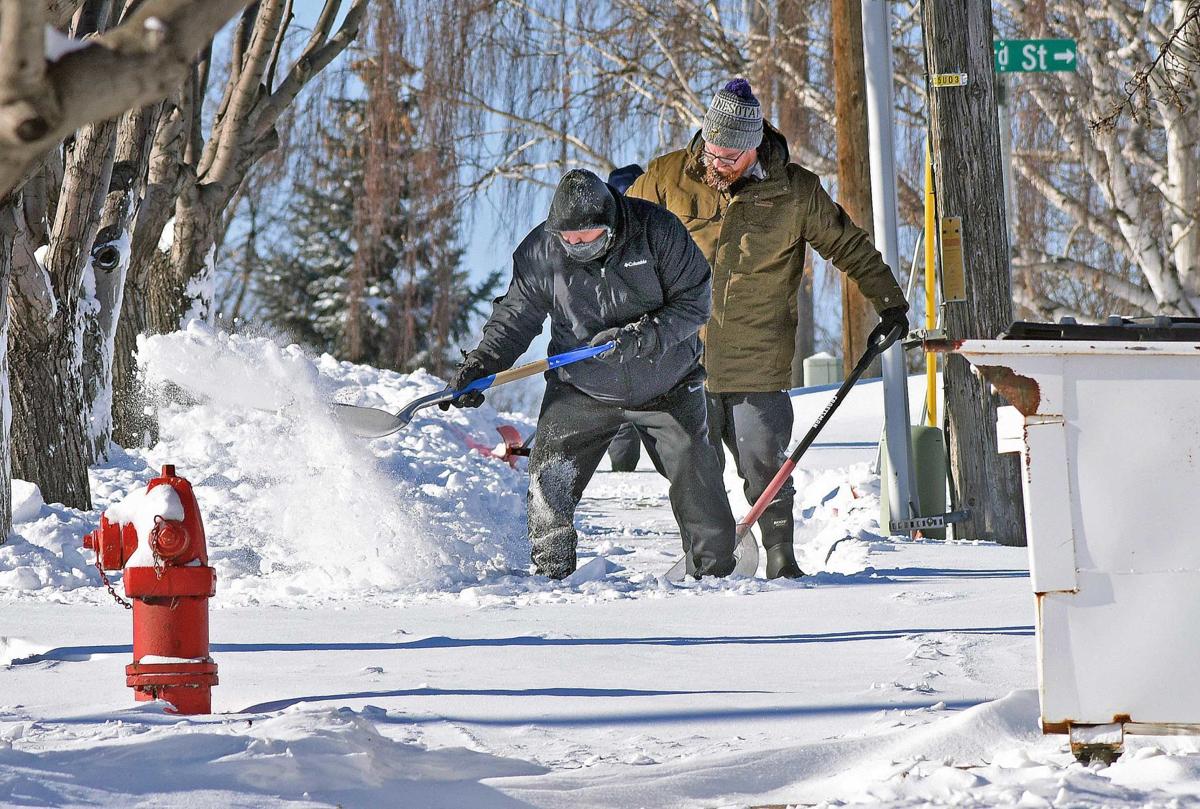 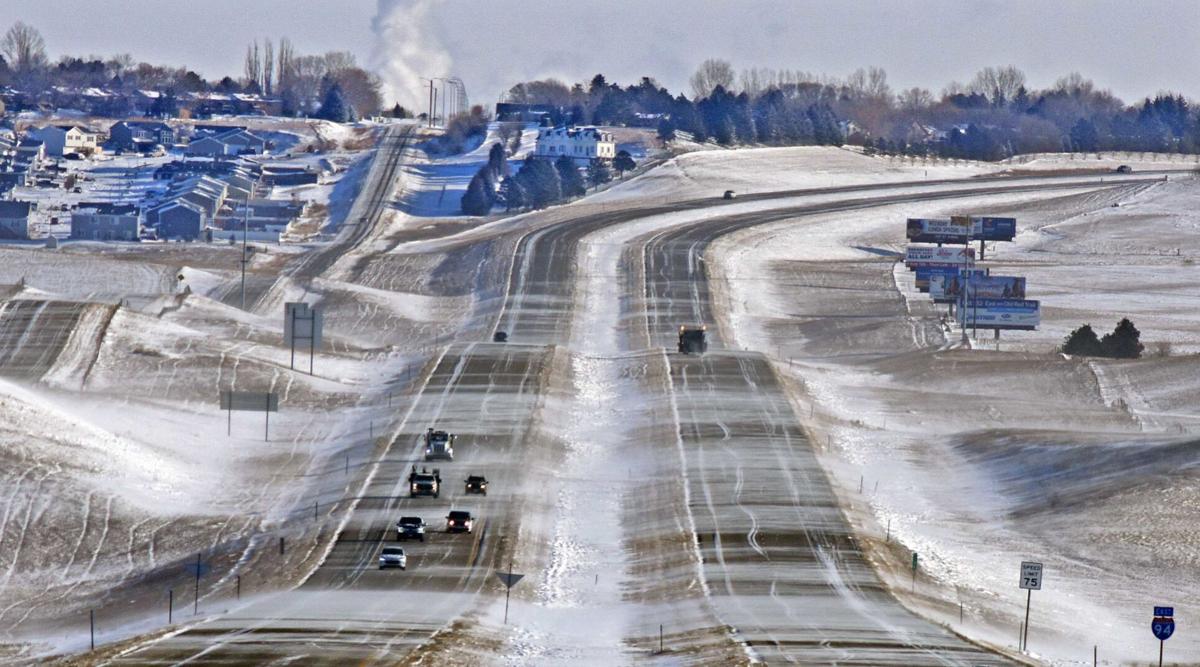 Motorists on Interstate 94 west of Mandan had to deal with ground blizzard conditions on Monday. 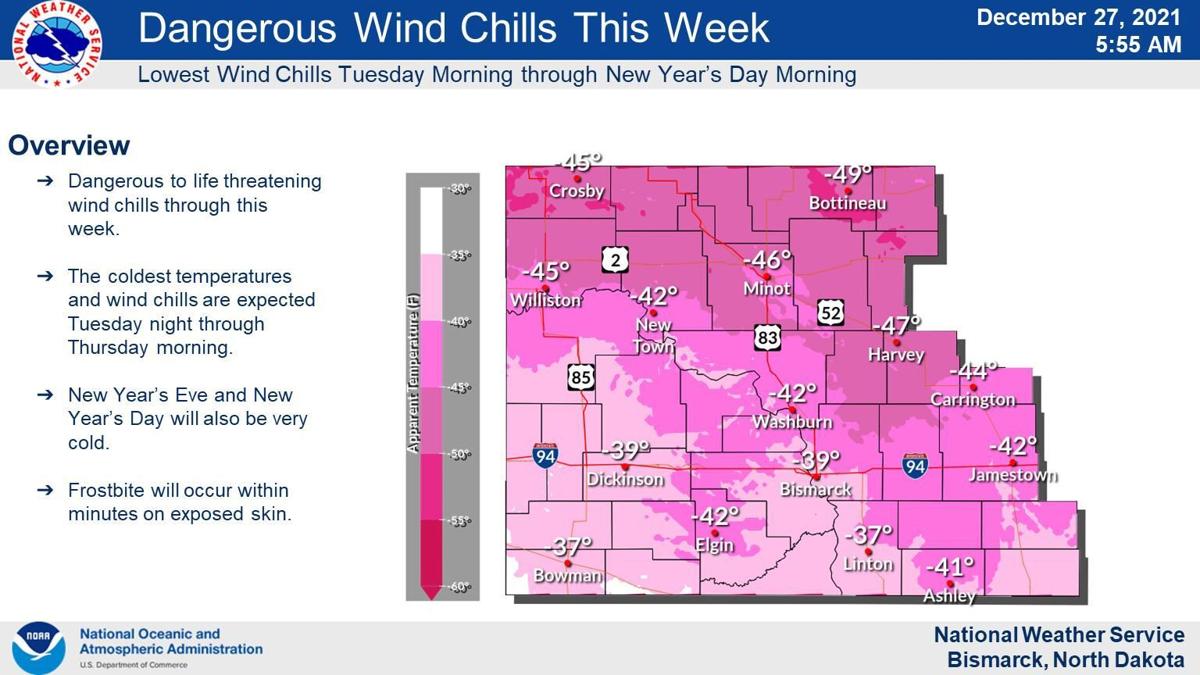