Excessive heat that blanketed North Dakota over the weekend sent temperatures into the triple digits in some areas including Bismarck, breaking records across the state and setting the stage for severe storms.

A northward bulge in the jet stream kept the extreme heat over much of the Plains on Saturday and Sunday, creating what AccuWeather Meteorologist Mary Gilbert called a "heat dome." Temperatures in the Upper Midwest were 15-25 degrees above normal, she reported.

High temperature records for June 19 fell or were tied from west to east in North Dakota on Sunday, according to the National Weather Service. They included:

The heat also brought with it moist air from the Gulf of Mexico, increasing the humidity level and making it feel even hotter -- a measurement known as heat index.

The normal high and low for Bismarck this time of year is 79 and 54 degrees. Cooler air moving in from the north will bring more seasonal temperatures to the region early this week, according to James Telken, a weather service meteorologist in Bismarck.

The start of the workweek has been a stormy one in many areas, however.

"The heat with all the moisture in it was kind of a primer for instability" in the atmosphere, Telken said.

An early Monday storm that ripped through Bismarck-Mandan dropped penny-size hail and as much as 1.5 inches of rain in Bismarck and 1.73 inches in the Mandan area, according to weather service reports. Reported wind gusts reached 75 mph.

There were reports of downed trees and tree limbs throughout the metro area, as well as flash flooding in Mandan bad enough to pop off manhole covers, Telken said.

Hot weather has hit much of the country in the past week and will continue in many areas this week, giving air conditioning equipment a workout.

"Energy demands will be exceptionally high this upcoming week across portions of the Plains and Midwest, stressing area power grids and putting an additional pinch on residents’ checkbooks," AccuWeather Meteorologist Brandon Buckingham said.

The Midwest Independent System Operator, which manages one of the two power grids in North Dakota, recently issued an advisory saying rolling blackouts are possible this summer because of predicted heat and the need to manage electricity demand.

"MISO's general manager told me, 'Just because where you're situated, shedding load isn't going to help with where things are tight,'" Fedorchak said. "And North Dakota has so much dispatchable generation, we're not going to be short."

"Dispatchable generation" refers to power sources that can be ramped up on demand to supply more power.

"We'll be generating the power everybody else needs," Fedorchak said.

One camper killed, another injured during storms in MN

One person is dead and another hospitalized after a tree fell on a camper during severe storms in central Minnesota. Among the storm damage calls the Douglas County Sheriff's Office received late Monday night was one from  Elmwood Resort on Lake Mary near Alexandria about 11:400 p.m. The caller reported cries for help coming from the camper on which the tree had fallen. Law enforcement officials arrived and found a man and woman trapped inside the camper. Alexandria firefighters help extract the victims. The man, 72-year-old Mark Edward Bunney, was pronounced dead at the scene. The injured woman, 66-year-old Debra Lynn Bunney, was taken to Alomere Health hospital in Alexandria. Officials say the couple lived in Miami, Arizona.

Excessive heat that blanketed North Dakota over the weekend sent temperatures into the triple digits in some areas including Bismarck, breakin…

Residents of a small community in northeastern South Dakota are still recovering from a wave of destructive storms a month ago. Piles of debris and broken tree limbs sit on the edge of town in Castlewood, a community of about 600 near Watertown. Some homes and buildings show fresh wood from repairs, while in other places a hole in the ground is the only sign of a former structure. According to the National Weather Service, 16 tornadoes hit eastern South Dakota and southwestern Minnesota on May 12. Castlewood was hit by an EF2 tornado that packed winds of 120 mph and stayed on the ground for about 2 miles.

The National Weather Service has confirmed two early morning tornadoes struck Minnehaha County during severe storms on Memorial Day. The Sioux Falls Argus Leader reports that the NWS confirmed an tornado touched down briefly in Sioux Falls around 2 a.m. It traveled a third of a mile with peak winds of 90 mph. The tornado damaged residential structures and felled multiple trees. Another tornado touched down about two miles outside of Brandon around the same time.  That twister traveled about half-a-mile and had peak winds of 105 mph. It damaged a church roof and toppled trees at a nearby farm. The NWS rated both twisters as EF-1s on the Enhanced Fujita Scale, which rates tornado intensity from EF-0 to EF-5.

The biggest star in our galaxy is about to die, here's what that means for Earth 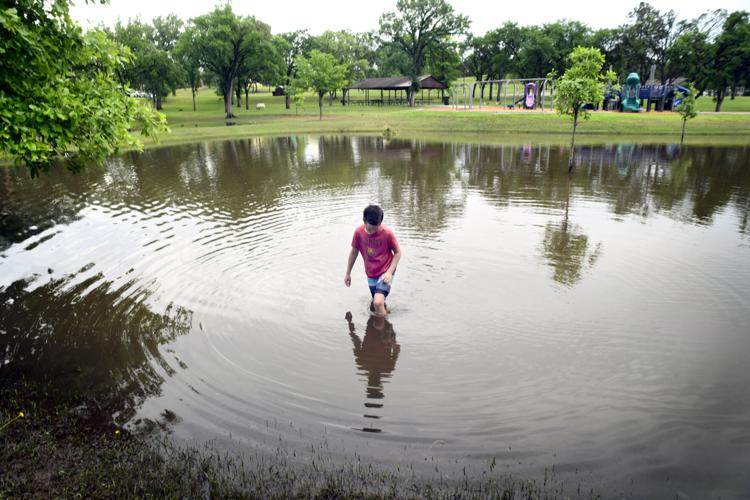 Killian Stisser, 8, wades across a low-lying part of Lions Park submerged in water from a thunderstorm that hit the Bismarck area early Monday. The National Weather Service recorded just over half an inch of rain at the Bismarck Airport, but the office also received reports of 1.68 inches at Fort Abraham Lincoln State Park and 1.59 inches near the state Capitol. 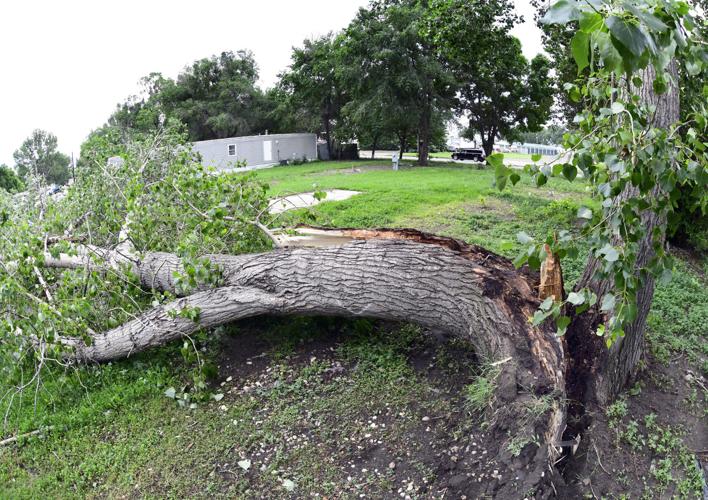 A large cottonwood tree in the Countryside Mobile Home Park in Mandan was toppled by a severe thunderstorm that hit the area early Monday. During the storm the Mandan Airport recorded wind speeds of 75 mph. There was no damage to any of the neighboring homes to the vacant lot. 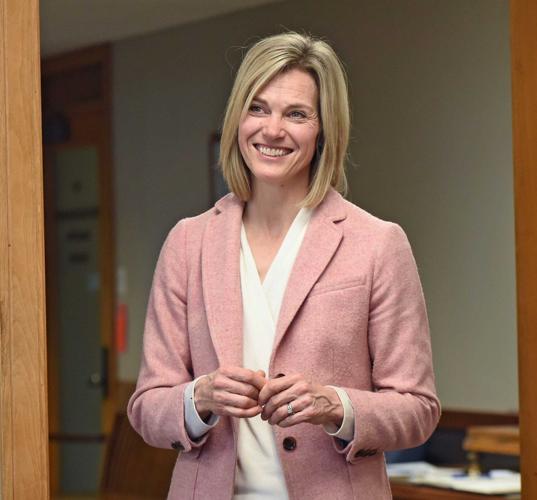