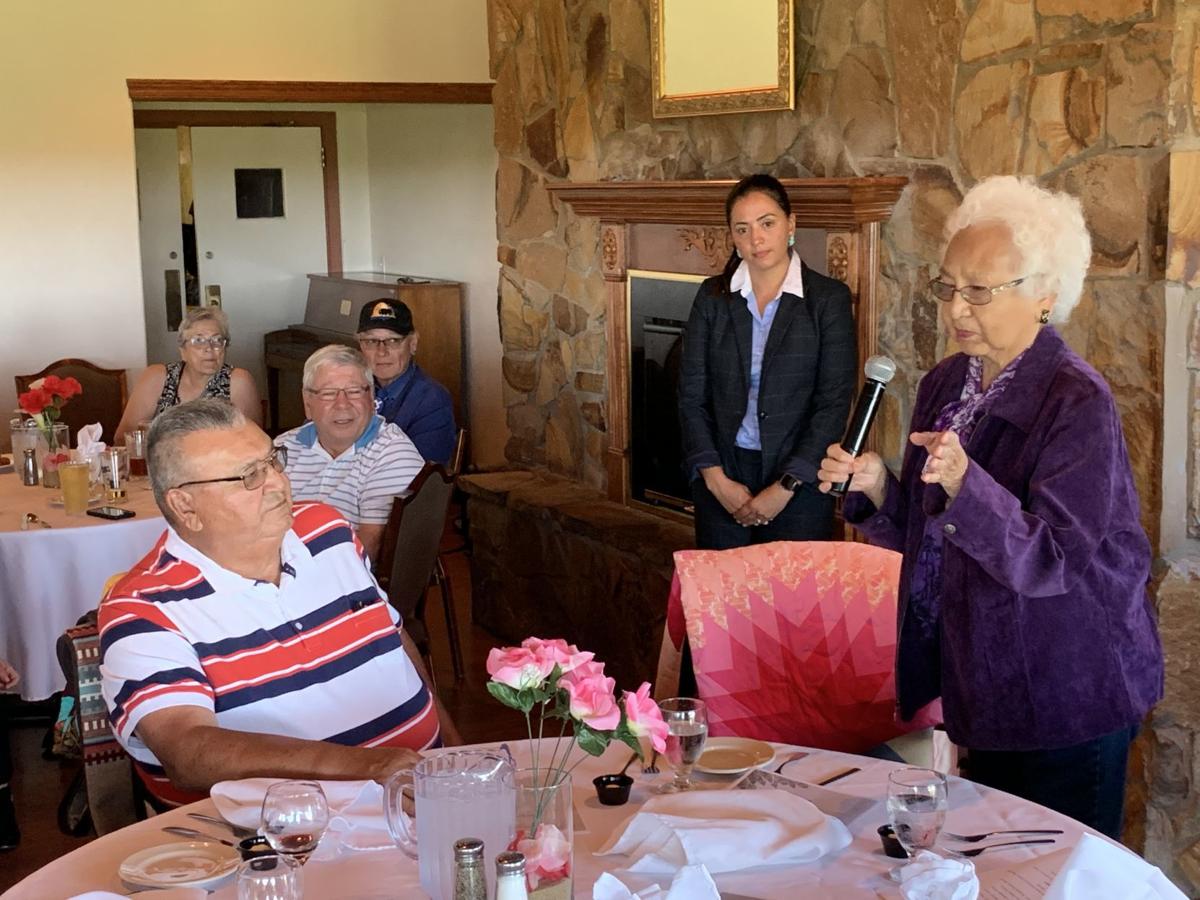 George Keepseagle, left, and Marilyn Keepseagle, right, at a June 27 ceremony in Bismarck honoring them for being lead plaintiffs in an American Indian farmer discrimination lawsuit against the federal government. 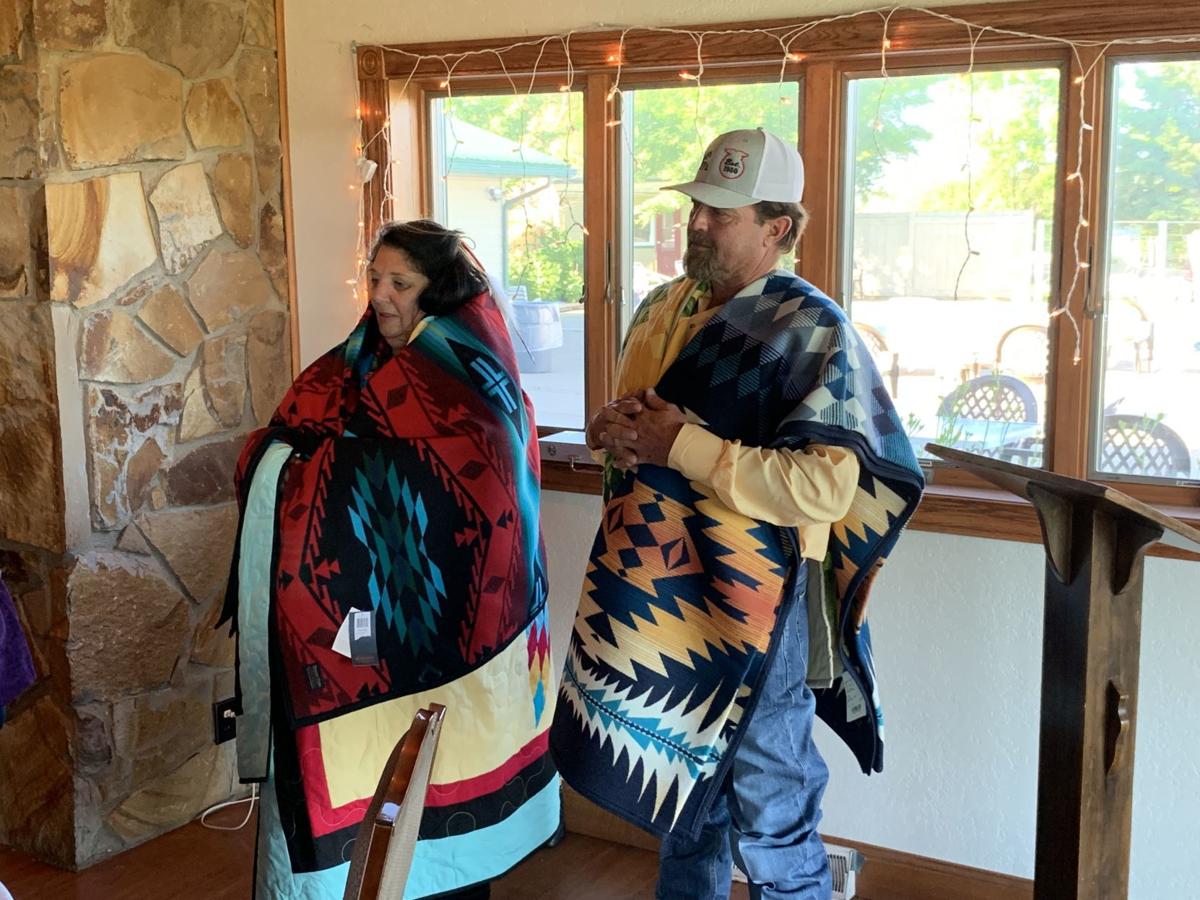 Claryca Mandan, left, and Porter Holder, right, at a June 27 ceremony in Bismarck honoring them for being lead plaintiffs in an American Indian farmer discrimination lawsuit against the federal government.

A charitable trust set up to dole out hundreds of millions of dollars from the federal government’s Obama-era discrimination settlement with American Indian farmers has formally honored the main plaintiffs in the case.

The Native American Agriculture Fund board of trustees and staff presented eagle feathers to George and Marilyn Keepseagle, Porter Holder and Claryca Mandan. The ceremony was in conjunction with a board business meeting in Bismarck on Thursday.

Eagle feathers are a symbol of high esteem in the Native American culture. They're typically given to people who have distinguished themselves as doing great deeds or being great leaders.

“The honoring (of lead plaintiffs) with eagle feathers was most fitting, as such a ceremony is appropriate and necessary to demonstrate their achievement by the ageless and ongoing ritual,” CEO Janie Hipp said.

The four lead plaintiffs also were bestowed with blankets, another honoring gift in Native culture given to people who make significant contributions.

“The four of them, they made up the face of the lawsuit,” said Karli Moore, associate program officer for the fund.

President Barack Obama’s administration agreed in 2011 to pay $680 million to settle a class-action lawsuit filed in 1999 by Indian farmers who said they were denied loans for decades because of government discrimination.

Only about half of the 10,000 expected claims came in. In April 2016, a judge approved a plan for the leftover money devised by the two sides in the lawsuit that included an additional payment to each claimant and about $300 million to groups that help Indians.

Two claimants appealed, arguing that all of the money should go to individual farmers, but a federal appeals court upheld the plan and the U.S. Supreme Court last year declined to take up the case.

The Arkansas-based Native American Agriculture Fund, which is overseeing about $266 million of the settlement money, provides grants to eligible organizations for business assistance, agricultural education, technical support and advocacy services to support Native farmers and ranchers.

The fund bills itself as the largest philanthropic organization devoted solely to serving the Native American farming and ranching community.

Reach Blake Nicholson at 701-250-8266 or Blake.Nicholson@bismarcktribune.com

U.S. government attorneys are fighting a lawsuit filed by families after a road washout two years ago on the Standing Rock Sioux Reservation killed two people.

ALBUQUERQUE, N.M. (AP) — A North Dakota man is charged with second-degree murder in the decapitation killing this month of a man at the man's …

SIOUX FALLS, S.D. — The Lower Brule Sioux Tribe has asked a federal judge to stop the Bureau of Indian Affairs from seizing millions of dollar…

BROWNING, Mont. — Earl Old Person, the chief of the Blackfeet Tribe in Montana and former chairman of the tribal business council, has died of…

FORT YATES — The Standing Rock Sioux Tribe has elected a woman to be its next leader, according to results released Tuesday.

A walk Thursday evening from Custer Park to the state Capitol honored the survivors of boarding schools and the Indigenous children who died at the facilities.

ABERDEEN, S.D. — An effort to return the remains of young men and women who died at the Carlisle Indian School in Pennsylvania will include th…

Watch Now: Are RoboCops coming to your police department?

Watch Now: Are RoboCops coming to your police department?

George Keepseagle, left, and Marilyn Keepseagle, right, at a June 27 ceremony in Bismarck honoring them for being lead plaintiffs in an American Indian farmer discrimination lawsuit against the federal government.

Claryca Mandan, left, and Porter Holder, right, at a June 27 ceremony in Bismarck honoring them for being lead plaintiffs in an American Indian farmer discrimination lawsuit against the federal government.