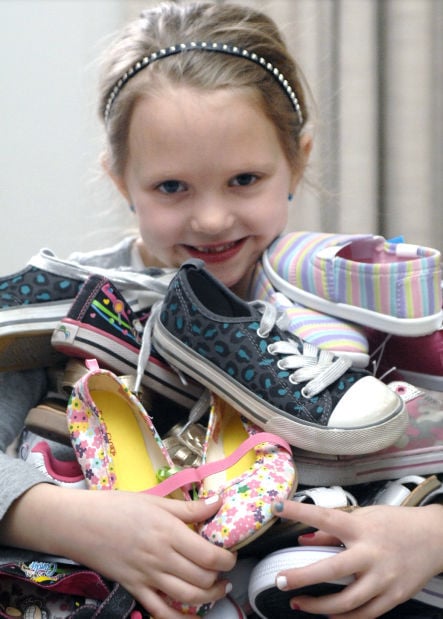 Makenna Burchinal of Bismarck cradles a few of the shoes she asked her family and friends to bring to her seventh birthday party last month instead of gifts so she could donate them to children in Africa. 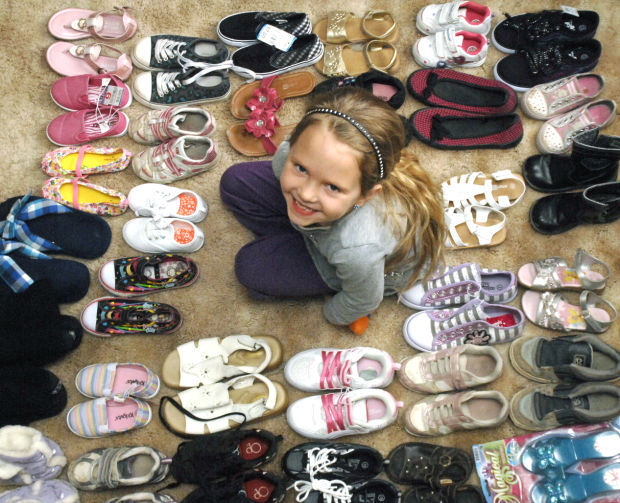 MaKenna Burchinal, 7, of Bismarck is surround by a few of the shoes she will donate to children in Africa.

A 7-year-old Bismarck girl sent the items she received at her birthday party to children she has never met — halfway around the world.

For her seventh birthday, Makenna Burchinal asked her party guests to simply bring a pair of new or used shoes instead of gifts to her birthday party March 3.

The party involved swimming, pizza and friends. But instead of opening presents after blowing out her candles, Makenna gathered the donated pairs of shoes to send to children in Africa.

“What 7-year-old wants to donate? Most 7-year-olds want presents,” said Kim Speckmann, a mother of one of the party guests. “We need more kids ... more people like that in the world.”

Speckmann asked Makenna whose idea it was to donate shoes to Africa instead of receiving gifts, and Makenna told her she had seen a commercial about kids overseas that sparked the idea.

“I actually really wanted shoes to send to Africa instead of getting presents,” Makenna said.

Her dad, Josh Burchinal, also was pleasantly surprised when his daughter told him about her birthday wishes.

“It was pretty surprising,” Josh Burchinal said. “I asked her if it was somebody else’s idea and she said it was hers.”

About 56 pairs of shoes donated by party guests, friends, family and neighbors are being sent to Africa through the God’s Child Project and other local charities.

“We appreciate all the people who donated shoes,” Josh Burchinal said.

If you would like to donate a pair of shoes or help send the shoes to Africa, contact Josh Burchinal at jmburchinal99@ymail.com.

The Bismarck Tribune is teaming up with local hospitals, nursing schools and businesses to recognize exemplary nurses.

Members of the Capital Ice Chips synchronized skating team are preparing for competition at nationals in Providence, R.I., later this month.

The Burleigh County Planning and Zoning Commission rejected a proposal to change the zoning in an area between Bismarck and Baldwin, following…

Makenna Burchinal of Bismarck cradles a few of the shoes she asked her family and friends to bring to her seventh birthday party last month instead of gifts so she could donate them to children in Africa.

MaKenna Burchinal, 7, of Bismarck is surround by a few of the shoes she will donate to children in Africa.