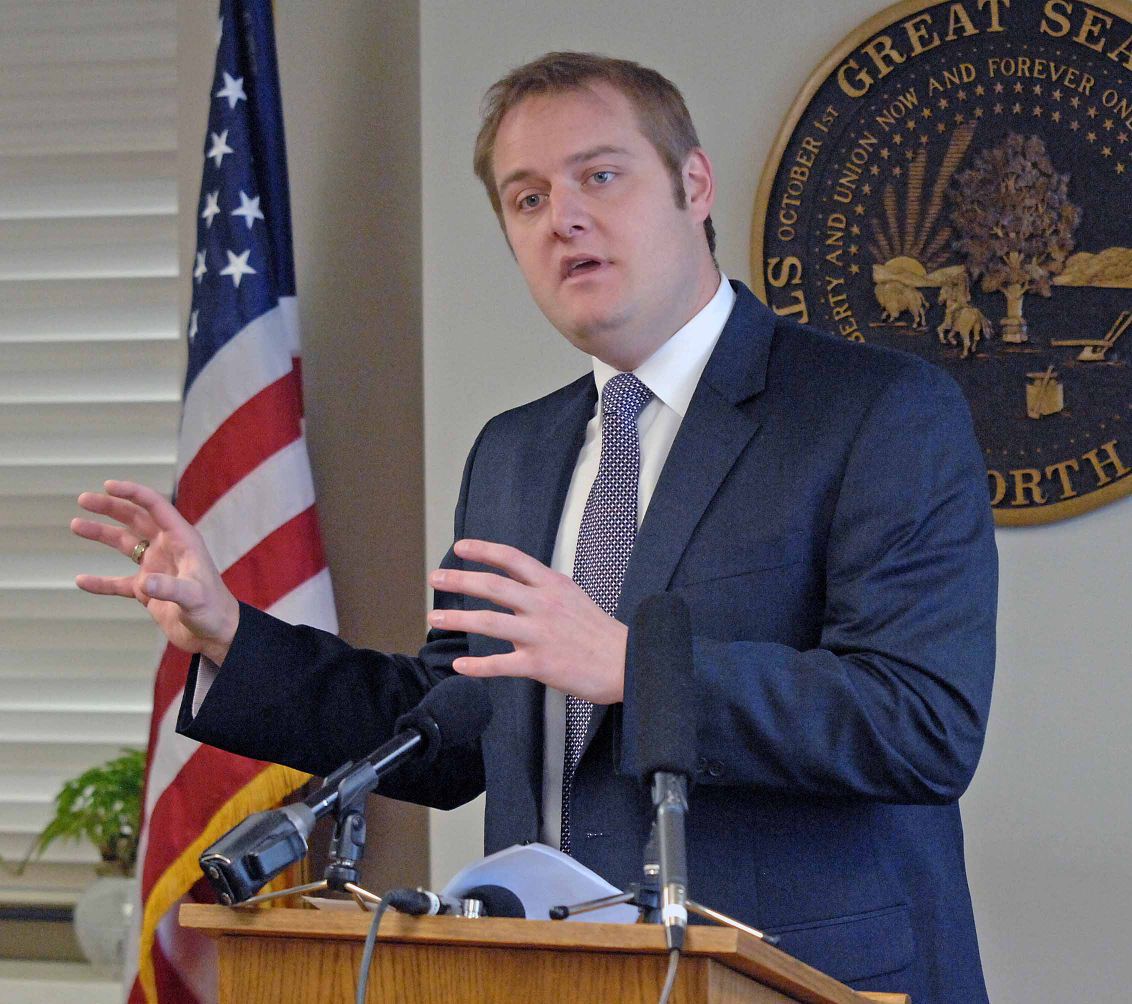 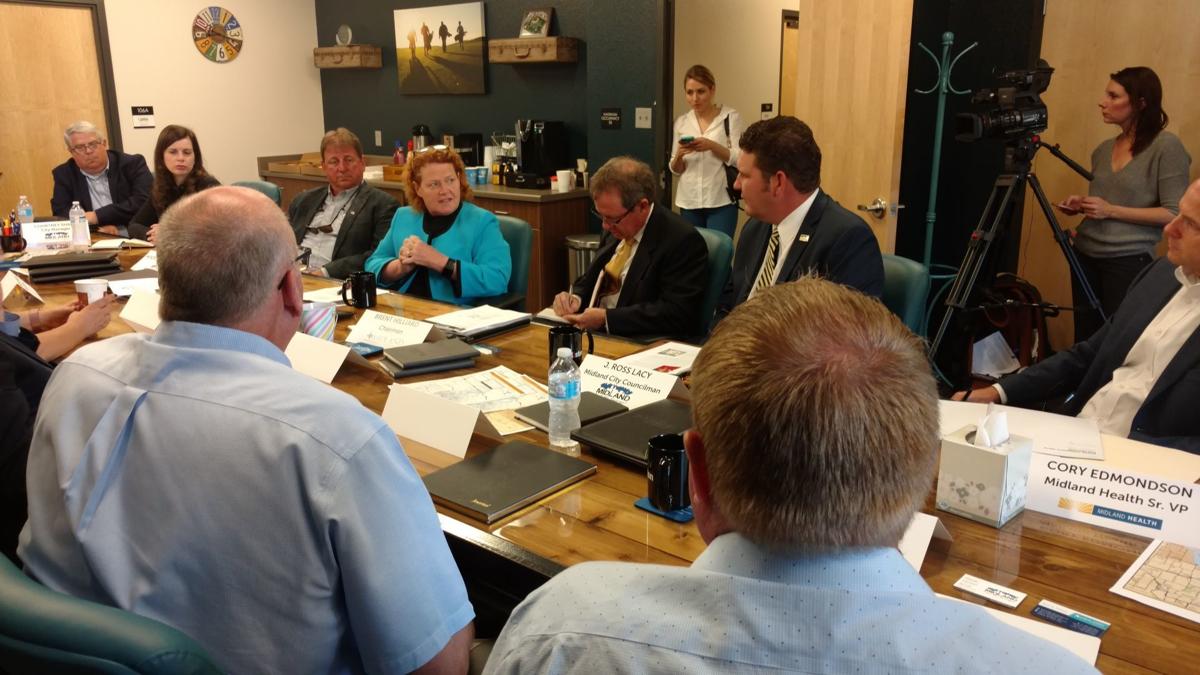 Sen. Heidi Heitkamp, D-N.D., center, talks to Midland, Texas, officials earlier this month who came to Williston to pick the brains of community leaders about how they handled the boom years. Brent Hilliard, director of Midland Community Development, said he was particularly impressed with the TrainND Center, and was very interested in how Williston sorted through priorities to decide what to focus on first. Midland likes in the Permian and is now at a similar stage as Williston was in 2013.

North Dakota will be collecting sales taxes from online retailers in the wake of today's ruling by the U.S. Supreme Court overturning a 1992 case that prohibited such collections.

"Remote sellers will be required to collect and remit sales tax to North Dakota  if they make a minimum of either 200 sales or $100,000 in sales per year in North Dakota, even if they don’t have a physical presence here," said Tax Commissioner Ryan Rauschenberger in a statement issued today after the U.S. Supreme Court announced its ruling on South Dakota vs. Wayfair, which overturns a 1992 case, Quill vs. North Dakota.

"Over the next few weeks, our office will be working to implement this new law change," said Rauschenberger, pointing out that the North Dakota Legislature passed a law during the 2017 session to address remote seller sales tax.

Among those whom Rauschenberger will be meeting to implement the change is Attorney General Wayne Stenehjem.

"This is a victory for North Dakota’s brick and mortar retailers who have had to compete with online retailers that don’t collect sales or use taxes from their customers," Stenehjem said.

North Dakota passed a law in 2017 requiring the collection of sales tax from online retailers ... and takes effect "on the date the United States Supreme Court issues an opinion overturning Quill v. North Dakota … or otherwise confirming a state may constitutionally impose its sales or use tax upon an out-of-state seller."

In Quill vs. North Dakota, the Supreme Court ruled that North Dakota could not require a mail order company to collect its sales tax unless they had a physical presence in the state.

North Dakota has played a key role since the original 1992 ruling was prompted by North Dakota's tax department, then led by Heidi Heitkamp, who attended that case's arguments.

At that time, North Dakota wanted the Quill Corporation, which had no physical presence in the state and which was selling computer software and other products in North Dakota through catalogs, ads, fliers and phone calls, to collect state sales tax on those sales.

“Retailers have been waiting for this day for more than two decades," said Matthew Shay, president and CEO of the National Retail Federation. "The retail industry is changing, and the Supreme Court has acted correctly in recognizing that it’s time for outdated sales tax policies to change as well. This ruling clears the way for a fair and level playing field where all retailers compete under the same sales tax rules whether they sell merchandise online, in-store or both.”

NRF argued in a friend-of-the-court brief last year that the court’s 1992 Quill Corp. v. North Dakota decision was outdated and that sales tax collection is no longer the burden it might once have been due to changes in technology. In the brief, NRF cited a variety of software available to automatically collect the sales tax owed, much of it available for free or at low cost.

Heitkamp, who went from North Dakota Tax Commissioner to U.S. Senator in the intervening years, backs the collection of taxes.

When Heitkamp, D-N.D., got the news that the U.S. Supreme Court would be taking up a case on state’s rights to collect sales tax on online sales, she just started smiling.

“I’m absolutely thrilled,” she said. So thrilled that she attended the arguments held earlier this year in the Wayfair case.

“Today’s decision is a shot of energy for the brick-and-mortar retailers and small businesses that will now be able to compete on equal terms with out-of-state online sellers," Heitkamp said. "It’s also a huge boost to our state revenues, which will mean millions of dollars in additional resources that can go towards critical investments that will grow our state economy."

"The Supreme Court recognizes the significant impact that technology has had on our retail markets. As noted in the decision, Quill essentially created a tax shelter for certain businesses and made it challenging for local, small businesses to compete with major retailers like Amazon and other online sellers," Oversen said. "With this news, I encourage our state legislature and executive branch to get right to work to take advantage of this opportunity to level the playing field for North Dakota businesses."

The U.S. Supreme Court action has its critics.

“Today's ruling threatens to stunt economic growth. More concerning, it marks a departure from a constitutional understanding of federalism. Remote retailers — many of whom are small businesses — may soon be forced to keep track of the thousands of taxing jurisdictions across the country, many with their own rates, bases, rules and regulations. Congress remains the only solution to this threat,” said Joel Griffith, director of the Center for State Fiscal Reform, associated with the American Legislative Exchange Council.

“This is a long overdue victory for our local retailers who provide the jobs, storefronts and shopping experiences that make our cities and towns the vibrant communities they are,” Burgum said. “For far too long, they’ve operated under an antiquated law that gave remote sellers an unfair advantage over retailers who invest their time, energy and resources into our communities. Today’s ruling will increase competition and level the playing field for online and Main Street merchants alike, creating a fairer, more modern marketplace and giving both our economy and our state revenues a much-needed boost.”

According to the state’s most recent study, the North Dakota Tax Commissioner’s office estimates $25 million to $30 million was not collected in 2012 because online retailers were not required to collect. Online purchases since 2012 have increased by as much as 50 percent, so North Dakota Retail Association President Mike Rud estimates more recent losses at $30 million to $40 million.

A total of 36 states and the District of Columbia had asked the high court take up the issue. In a brief filed with the court, states wrote, "As the volume of internet-based retail transactions continues to compound daily, the physical-presence rule exacts an ever-increasing toll on the states' fiscal health."

Bismarck Tribune journalist Jessica Holdman and the Associated Press contributed to this report.

A Bismarck man who allegedly threatened to kill a woman if she gave him a bad haircut is under arrest for terrorizing, court documents show.

A Standing Rock woman who was the subject of a lengthy manhunt was arrested last week in Texas on a felony warrant from North Dakota.

A Mandan woman who police allege sold more than half a ton of marijuana between March 2018 and April 2019 will go to trial in May.

A bust in Grant County netted 5 pounds of methamphetamine -- the most ever seized in the rural county. A Carson man is in custody.

Owners of backyard chickens in Mandan have taken a variety of steps to mitigate the winter's cold on their hens.

Despite nearly $150 million worth of school construction and renovation work in recent years, Bismarck is still addressing rising enrollment.

Sen. Heidi Heitkamp, D-N.D., center, talks to Midland, Texas, officials earlier this month who came to Williston to pick the brains of community leaders about how they handled the boom years. Brent Hilliard, director of Midland Community Development, said he was particularly impressed with the TrainND Center, and was very interested in how Williston sorted through priorities to decide what to focus on first. Midland likes in the Permian and is now at a similar stage as Williston was in 2013.