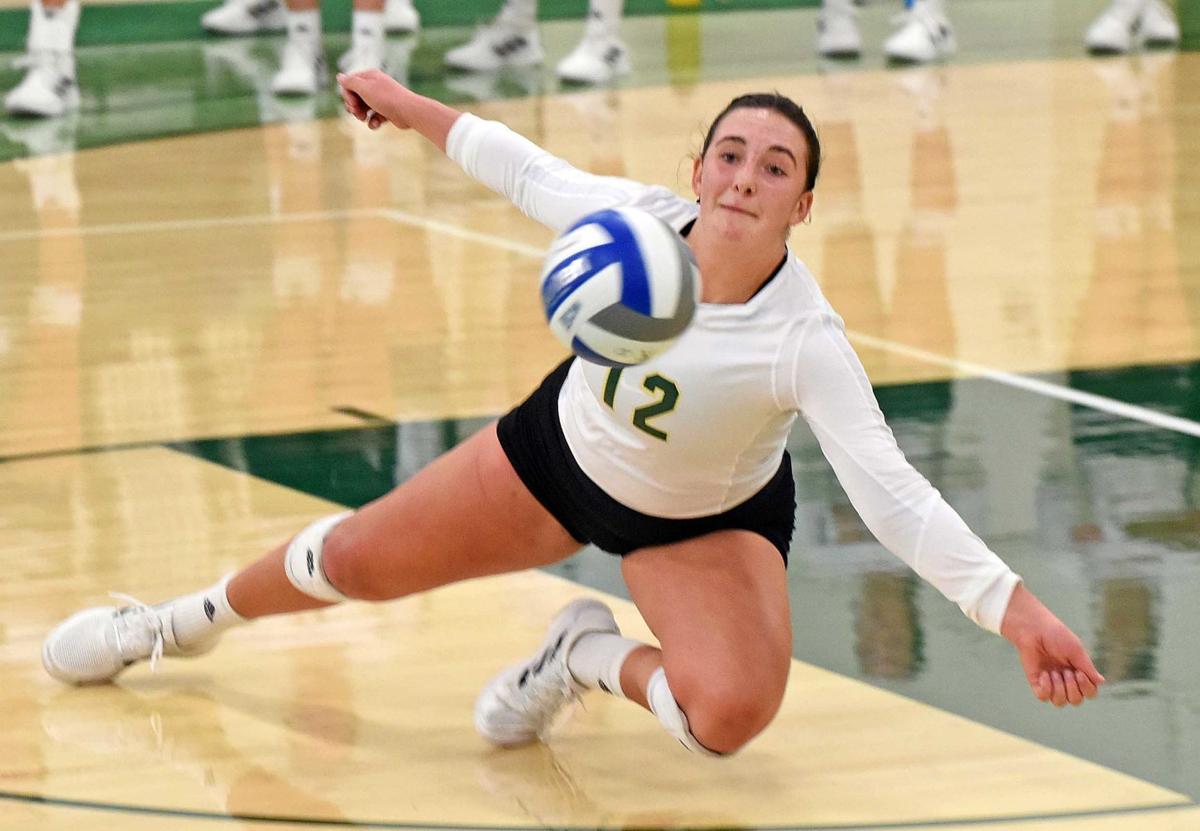 Bismarck's Macy Wetsch (12) dives to save a ball. 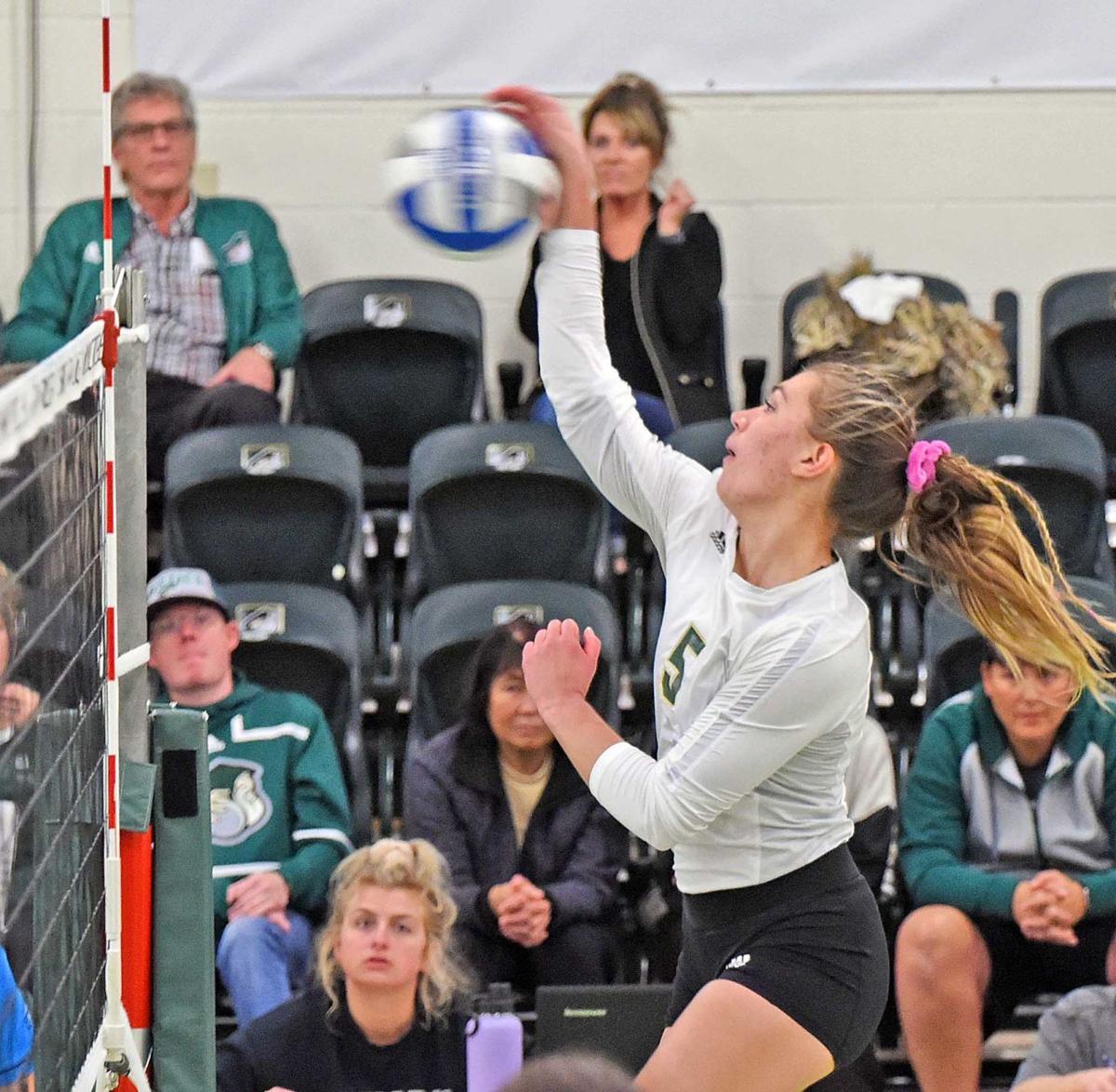 Bismarck's Greta Gibson (5) gets up high for a kill attempt.

Sophomore Night at the Armory opened with a big first-set win and finished with a sweep of Lake Region State in their Mon-Dak Conference regular-season finale. In between, it wasn’t exactly smooth sailing to a 10th consecutive win. BSC defeated the Royals 25-14, 26-24, 25-21 on Wednesday night.

“We were playing a little hesitant tonight,” Mystics coach Kyle Kuether said. “I think the biggest thing that helped us tonight was just our mentality that we are going to win. Lake Region outplayed us for a good part of the match. I think it’s a good thing that we came out and won 3-0 because that match could have gone either way.”

The Mystics reeled off seven straight points to turn an early 7-5 deficit into a 12-7 lead, built an 18-12 advantage and closed the opening set with a 7-1 burst to take a 25-14 victory over the Royals.

After that, the Royals pushed the Mystics to the brink in both the second and third sets.

“We tend to come out strong, and then we always have that one struggle set, whether it’s the second or the third,” Mystics sophomore Greta Gibson said. “We snuck her out but we’ve just got to be able to stay playing at the high level that we play at in the first set throughout the whole match.”

The Mystics used a varied offensive attack to finish off the victory.

“We had to bring our own energy,” Gibson said. “We had to pass the ball and Cam was dicing them out to everybody and everybody was just putting them down when she was giving them to them. We just put it all together.”

“Not any one hitter is really our go-to,” Kuether said. “We’ve been really working on distributing the ball a lot more. Our outsides have been kind of our go-to all season but now toward the end of the season, a lot of teams know that and they’re trying to shut them down so we’ve been working on distributing the ball a little more and I think it showed tonight. Greta had an awesome game tonight.”

The Mystics have locked up the No. 1 seed for the West sub-region quarterfinals, set for Oct. 24. They compete in a tournament at Lake Region this weekend before hosting the Jamestown JV on Wednesday, Oct. 20 in the regular-season finale as they tune up for the postseason.

What do they need to work on to prepare for the tournament?

“I think just staying in the moment,” Kuether said. “Sometimes we get ahead of ourselves, we start thinking about maybe other things. Sometimes we get stuck in the past where we keep thinking about an error that we just made. So I think the biggest thing right now is just the mentality. Toward the end of the season, there’s not really a lot you can change, skill-wise. So just keeping a straight mental game is what we need to work on.”

“We’re going to have to keep staying focused in practice, staying consistent and bringing energy,” Gibson said. “I know there’s a lot of talent on our team and we’ve just got to put it all together and we’ll pull through.”

The Mystics travel to Devils Lake this weekend for the Lake Region Slamfest tournament, where they will take on Williston State and the Jamestown JV on Friday and Trinity Bible College and the Dickinson State JV on Saturday.

Dick Vitale made a promise to Jimmy V he won't break, even as cancer tries to stop him

He arrived about three and a half hours before tip-off and walked slowly through a back hallway and into the Smith Center.

Bismarck's Macy Wetsch (12) dives to save a ball.

Bismarck's Greta Gibson (5) gets up high for a kill attempt.