Past several “no trespass” signs, over a ravine and up a prairie trail lies a field south of Mandan that looks unremarkable at first glance.

Barbed wire fences in the area, skirting around what’s considered the first pioneer cemetery certified west of Jamestown in North Dakota. Several dozen early settlers are believed to be buried there, though just 10 headstones remain and several of them are in poor shape.

The site known as Greenwood Cemetery was established in 1882 by some of Mandan and Morton County’s first civic leaders.

“We are all blown away that there’s such significant history attached to Greenwood, and there’s not enough attention on the maintenance and upkeep,” Morton County Human Resources Director Wendy Bent said. “A lot of those tombstones are in disrepair and we want to know how we can clean the cemetery.”

A team of officials from several county departments are working to document the graves, research the cemetery’s history and brainstorm ideas for how to preserve the site through a potential state or local designation. They also are looking for volunteers to clean the headstones.

The effort came about after a telecom company proposed a project through the area, ultimately moving it after realizing a cemetery was there.

Morton County Commissioner Andy Zachmeier has long been interested in the history of the site and other abandoned cemeteries, fielding inquiries on the topic over the years. The county now is working on a policy surrounding the care of such sites.

He sees the potential in extending a walking trail to the cemetery or possibly even opening it for future burials while maintaining its historical graves.

“It’s a beautiful area and there’s got to still be a way to make it a public benefit,” he said.

A group of settlers formed in early 1882 to establish the cemetery, and their blueprints showed grand plans.

They intended for graves to be placed around a center circle with avenues winding throughout the site. The grounds would incorporate the designs of several fraternal organizations popular in the area at the time, including a Masonic Square and Compass and a chain of three links, a symbol of the Odd Fellows.

“The grounds were laid out after great rural cemeteries with walks and avenues to conform with the natural topography,” reads a booklet on the cemetery published in 1979. “It was said the place in time would be one of the finest cities of the dead in the Northwest.”

Cheryl Leach works in the county’s human resources department and is involved in the cemetery project.

“They had quite the elaborate plan,” she said of the cemetery’s founders. “I think it actually would have been had it come to fruition.”

At least some of the design seems to have panned out. Aerial photos taken in recent weeks to aid in cemetery research show circular scars in the field not easily visible at ground level.

The booklet states that 10 acres were to be used for Catholic burials. The cemetery was abandoned, however, by 1905. Members of the association that took care of it moved away or died, but local historians who worked on the booklet in the 1970s wondered what, exactly, had happened.

“It is one of the imponderables of Greenwood Cemetery,” the booklet states.

The cemetery has drawn headlines several times over the years in The Bismarck Tribune. A rancher sought to acquire the land in 1974, prompting the Morton County Commission to threaten legal action. The rancher later withdrew his request, and the commission vowed to restore the cemetery but didn’t follow through on those plans.

A police blotter from 1988 shows the site was vandalized. A large marble monument and several tombstones were either knocked over or shattered.

Then in 2008, digging for a water project uncovered nearly 40 unmarked graves. The remains were reburied elsewhere at the site.

County officials have checked in on the abandoned cemetery periodically for decades, as is their responsibility under state law.

Horses use it as part of their pasture, and a county parks worker recently discovered a gravestone that no one knew was there, thanks to the horses’ grazing, Bent said.

A team of county officials recently visited the site to map and photograph the known graves. Soon they want to clean the headstones and hope students in the area seeking community service hours might be interested in helping. Bent said they can email her at wendy.bent@mortonnd.org or call 701-667-3414.

“We’re going to be gone some day,” she said. “I think that might be a lost art, caring for the people who came before us.”

The Mandan City Commission approved a change in enforcement hours for some parking zones Tuesday night. 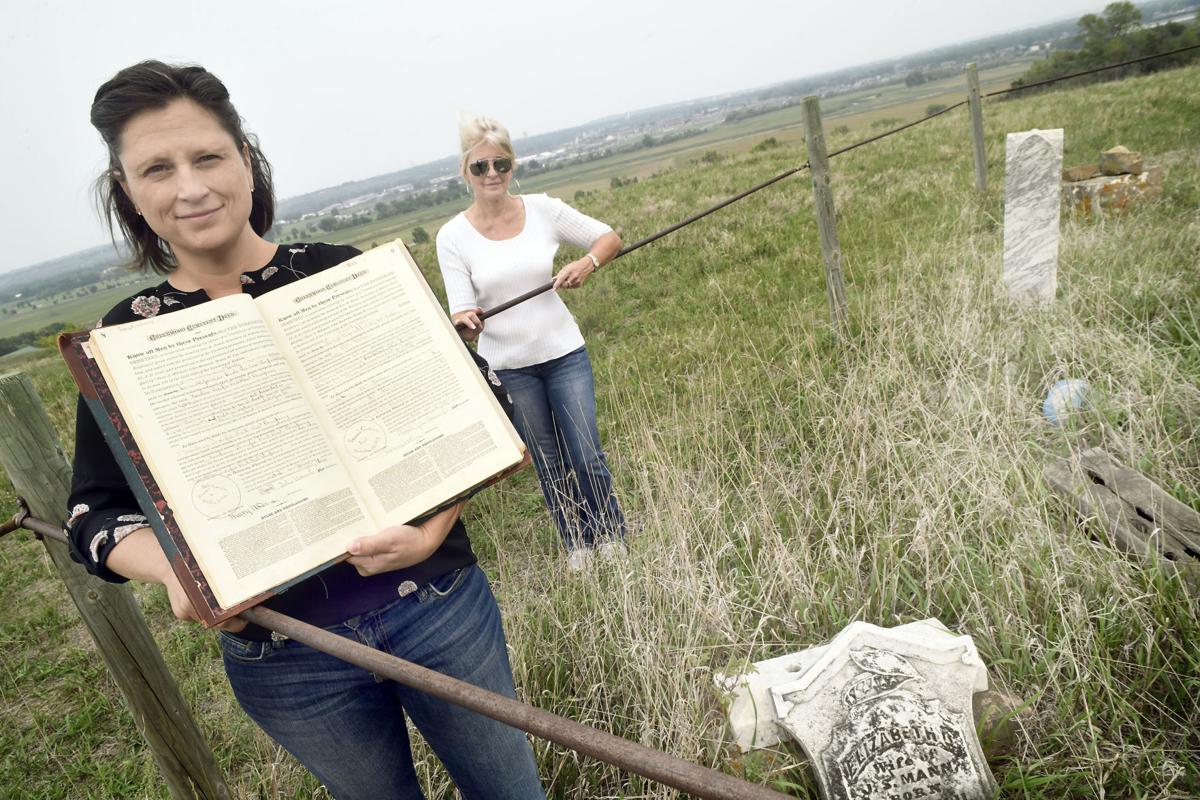 Wendy Bent, left, and Cheryl Leach, both with the Morton County Human Resources department, stand next to the Mann family plot located in the abandoned Greenwood Cemetery southeast of Mandan. Elizabeth Mann was the first to be buried at the cemetery in 1874, which overlooks the Missouri River valley. The county is trying to preserve the cemetery which was the first certified pioneer cemetery west of Jamestown in 1882. 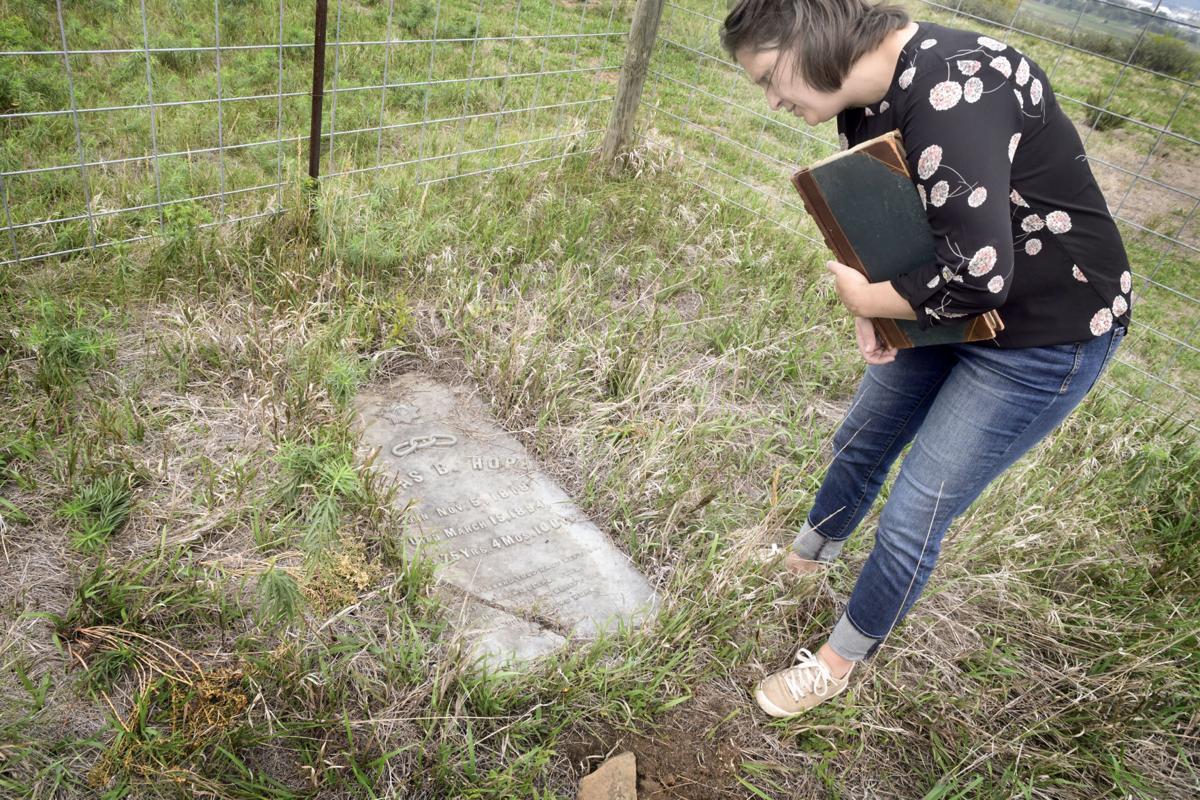 Wendy Bent examines a grave site marker of Elias B Hope, a member of the Odd Fellow fraternal organization, at the Greenwood Cemetery located southeast of Mandan. Hope was buried in 1894 at the age of 75.