North Dakota is extending workers' compensation benefits to any first responders and health care providers who contract COVID-19 on the job, as the state sees further spread of the disease caused by the new coronovirus, with nine additional cases reported along with one more hospitalization.

"The environment of someone who's working as a first responder significantly increases their direct exposure to COVID-19 as they're working to help others and save others' lives," Gov. Doug Burgum said during an afternoon briefing Wednesday.

The statewide total rose to 45 positive cases, with seven counties showing more than one case. Morton County's total rose to eight, bumping the Burleigh-Morton total to 26, by far the most for any area in the state.

Burleigh, Morton, Cass, Ward, Pierce, Ramsey and Stark counties now all have more than one case.

State and private labs have now conducted 1,955 total tests, with 1,910 being negative. There have been eight hospitalizations, and no deaths. The state has not released details on the hospitalizations.

Burgum has consistently said that based on what other states have experienced, North Dakota can expect the number of cases to continue to rise. The goal, he has said, is "flattening the curve" and keeping the caseload from surpassing the capacity of hospitals.

That includes boosting testing, and Burgum said "we're closing in on statewide testing," with tests received from 50 of the state's 53 counties.

The Department of Health has more than 1,150 test kids available to be sent to health care providers around the state, and enough supplies at the state lab for nearly 3,250 more tests.

"We at least have the ability to more than double the number of tests that we've taken, in the coming days, if that many tests are recommended by health providers," Burgum said, adding that "We want to move from testing people in the thousands to testing tens of thousands of people."

"The goal that we have is to take the number of beds that we have in North Dakota, increase the percentage of those that would be able to handle an ICU situation, and then possibly create even more beds beyond that," Burgum said.

Workers' comp in North Dakota doesn't cover viruses, or loss of income should a first responder or health care worker be sidelined due to exposure to the coronavirus.

"It's imperative today under these extraordinary circumstances that we extend coverage to our front line personnel," Burgum said.

His order provides coverage for first responders and health care workers who contract COVID-19 on the job, as well as 14 days of medical and wage replacement benefits for workers who are quarantined.

People covered by the order amount to 10% of the state's population, according to the governor -- more than 64,000 medical providers, 11,000 paid firefighters and 7,700 volunteer firefighters, 5,900 law officers and nearly 900 ambulance personnel.

Coverage is backdated to March 13, the day a state emergency was declared.

Burgum also detailed efforts underway to boost equipment available to medical providers. Officials are looking into whether Roughrider Industries at the State Penitentiary can make N95 face masks, and the private sector also is trying to help out, he said.

The North Dakota AFL-CIO in partnership with several groups will be hosting a personal protective equipment donation drive this weekend at Labor Halls in Bismarck and Fargo.

Unions will be accepting donations of new N95 masks and other protective equipment, which will be distributed to hospitals in North Dakota.

“It’s incredibly important that we ensure the health and safety of the front line workers in health care, always, but especially in this pandemic,” North Dakota AFL-CIO President Landis Larson said in a statement. “These workers having the proper personal protective equipment is vital to all our health and safety.”

The Bismarck Labor Temple is at 1323 E. Front Ave. Donation times are 12-2 p.m. Saturday and Sunday. People bringing donations are asked to remain in their cars.

Burgum also announced that North Dakota has received federal approval to have more flexibility in its Medicaid program due to the coronavirus.

That will enable North Dakota to temporarily change select Medicaid requirements to ensure sufficient health care services and resources are available to people enrolled in the program during the coronavirus pandemic, according to the state Department of Human Services.

The agency will host a webinar to provide updated information and answer questions pertaining to Medicaid services and COVID-19. The webinar is from 1-2 p.m. Central time on Friday. North Dakota Medicaid providers, advocacy organizations and other stakeholders are invited to participate.

The meeting will be available through Skype video conference at: https://bit.ly/2QJtrHW. People can join from any computer or mobile device. The meeting will be recorded and available for later viewing on the department’s website at: www.nd.gov/dhs/info/covid-19/program-policy.html.

What is the coronavirus?

The coronavirus outbreak started in Wuhan, China, in late 2019 and has spread worldwide. The new virus causes a disease known as COVID-19. The virus is part of a larger family of coronaviruses, which can lead to illnesses ranging from a mild common cold to more severe respiratory diseases such as SARS and MERS.

Who is at risk and what are the symptoms?

Public health experts say the new coronavirus is more contagious than the seasonal flu. The majority of people who become sick experience mild symptoms, but some become more seriously ill. People who contract the virus can develop pneumonia, and some have died. People who are elderly or have underlying medical issues are at greater risk of becoming more severely sick. Symptoms of the virus include a cough, fever and shortness of breath.

What should I do if I develop symptoms?

The North Dakota Department of Health advises that people call their health care provider to tell them about recent travel or exposure, and to follow their guidance. Try to avoid contact with other people in the meantime.

What can I do to prevent the virus from spreading?

The health department advises that people wash their hands with soap and water or an alcohol-based hand sanitizer for at least 20 seconds. People who are sick should stay home from work or school, both to protect themselves and others with whom they would come in contact. Avoid touching your face, cover a cough or sneeze with a tissue or an elbow, clean and disinfect frequently touched objects and surfaces, and avoid contact with people who are sick.

Where can I find more information?

People with coronavirus-related questions can call the state health department hotline at 866-207-2880. Those who need medical advice should contact their health care provider.

North Dakota's COVID-19 total rises to 36 with 4 new cases, including 1 in far west

Four more people including a man in Dunn County have tested positive for COVID-19, bringing the state total to 36. Burleigh has its 18th case.

North Dakota takes steps to shore up child care, enable all residents to vote in the June election and ensure they can pay taxes on time. 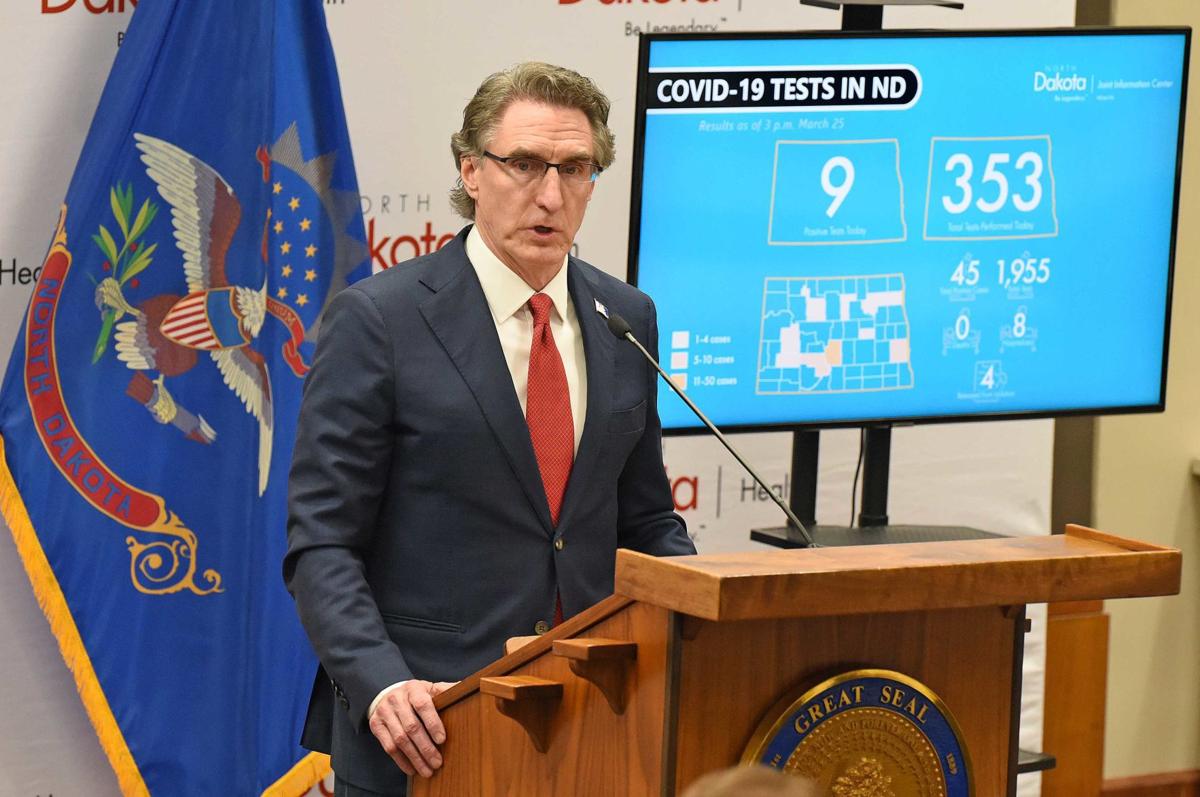 Gov. Doug Burgum reported nine more positive tests for COVID-19 at the daily press briefing on Wednesday in the state Capitol in Bismarck. To date there are 45 people in North Dakota who have tested positive for COVID-19 out of 1,955 total tests. 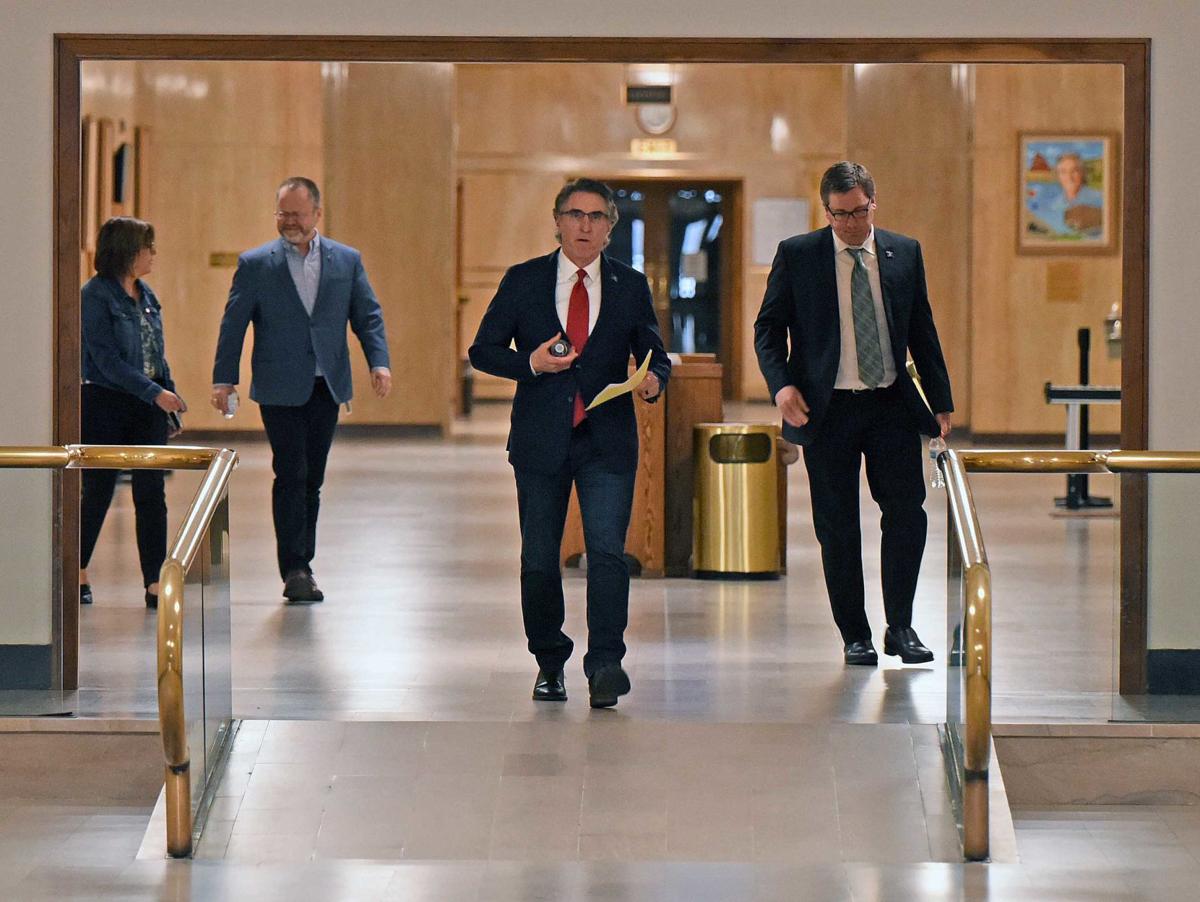 Gov. Doug Burgum, center, and staff walk in the state Capitol to the daily press briefing on COVID-19 on Wednesday afternoon. In back from left are JoDee Hanson, chief administrative officer, Lt. Gov. Brent Sanford and Mike Nowatzki, communications director.