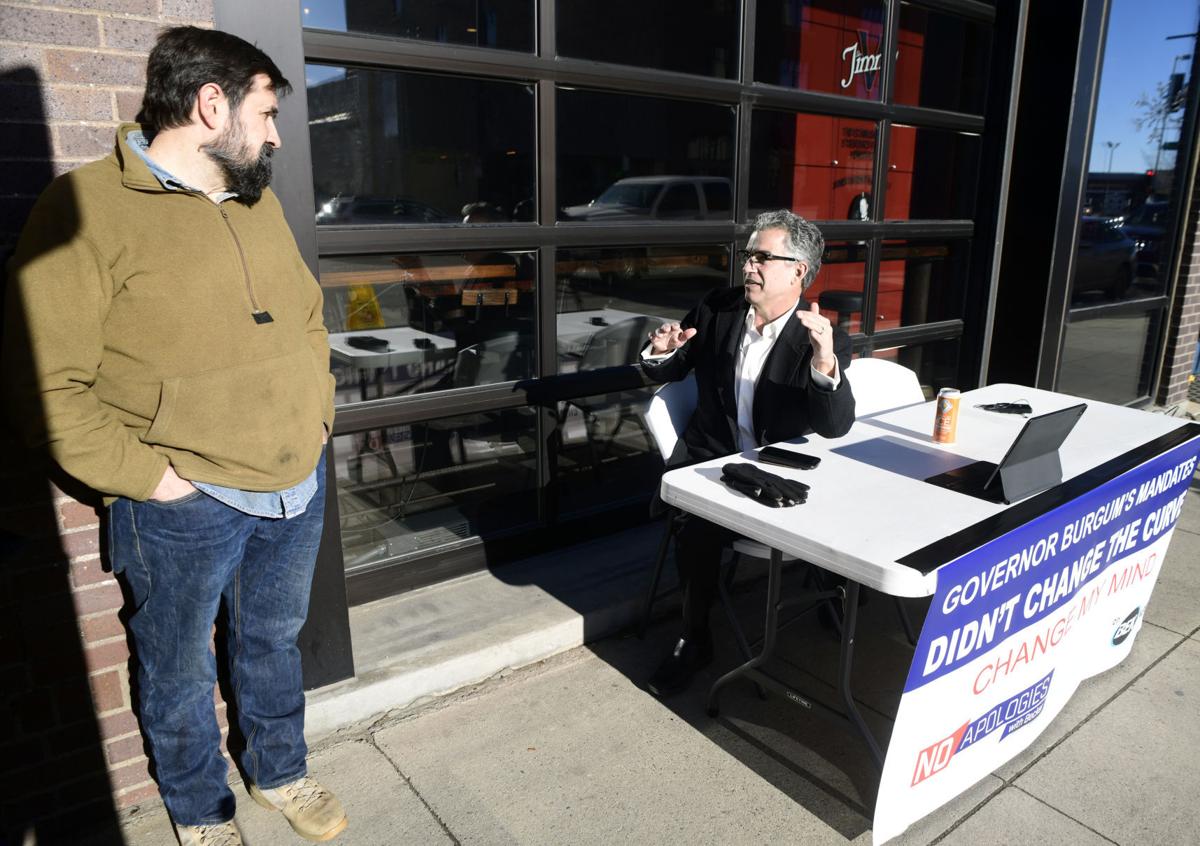 Mike Coots, left, of Hebron, talks about the statewide mask mandate with state Rep. Rick Becker, R-Bismarck, on Main Avenue in Bismarck on Monday. Becker sat behind a table with a large sign attached stating "Governor Burgum's Mandate Didn't Change the Curve, Change My Mind." Becker, a plastic surgeon and bar owner, is a critic of the mandate. Coots agreed with Becker on the issue. 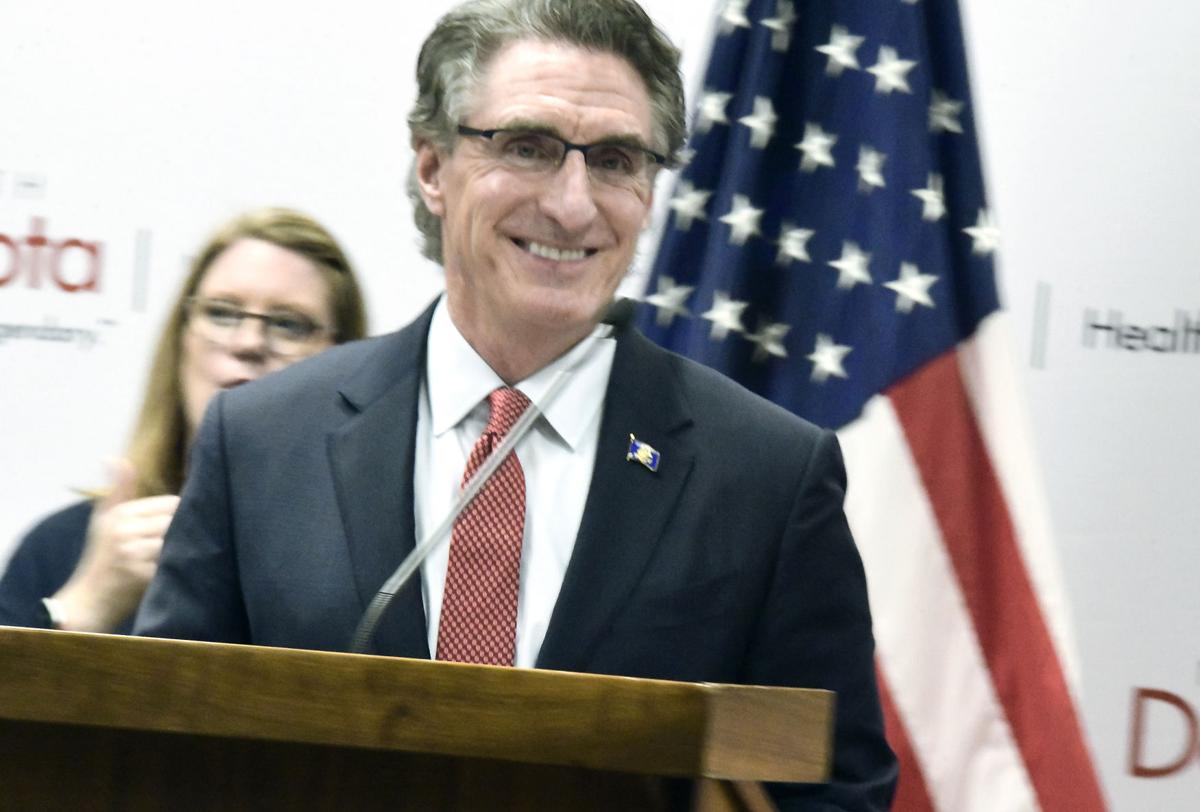 North Dakota Gov. Doug Burgum at an October briefing at the Capitol.

Gov. Doug Burgum is easing restrictions on restaurants, bars and event venues, allowing them to raise their capacity limits now that active coronavirus cases and hospitalizations have fallen since their November peak.

The governor on Monday announced that he will amend an executive order issued in mid-November that imposed a host of measures aimed at curbing the spread of the virus. The changes will not affect the statewide mask mandate, which is set to expire Jan. 18.

The amended order allows restaurants, bars and other food service establishments to operate at 65% of their licensed capacity for a maximum of 200 patrons beginning at 8 a.m. Friday. They are now mandated to operate at 50% capacity -- a restriction that was set to expire on Friday. The facilities still must adhere to other requirements, such as placing tables apart so that parties can maintain 6 feet of distance from each other, keeping dance areas closed and requiring that everyone inside wear a mask unless a person is eating or drinking.

Banquets, ballrooms and event venues can increase their capacities from 25% to 50%, not to exceed limits set under ND Smart Restart protocols. The change also takes effect at 8 a.m. Friday.

Burgum has lowered the statewide COVID-19 risk level from the orange "high risk" category to yellow "moderate" risk. The level indicates which set of ND Smart Restart guidelines should be followed by everything from businesses to family gatherings. Those protocols are not enforced.

The number of people hospitalized at a given time in North Dakota due to COVID-19 has fallen by more than 200 to 98, according to data reported by the North Dakota Department of Health on Monday. The governor's announcement cited that and other figures, including an 80% drop in active cases since mid-November and a decline in the state's positivity rate.

State officials continue to watch for a potential uptick in COVID-19 cases after the holidays and "are concerned" they are missing cases due to low testing levels, according to a statement. In the first few days of 2020, fewer than 5,000 tests per day have been administered. In fall 2020, testing sometimes exceeded 10,000 per day.

Another Burleigh County resident with COVID-19 has died, the state Department of Health reported Monday.

The death of a Burleigh woman in her 70s and a Nelson County man in his 80s brought the state's pandemic death toll to 1,312 -- one-fifth of them in Burleigh-Morton counties.

Health officials reported 199 new COVID-19 cases from 3,321 tests handled Sunday. Testing typically dips over the weekend. The daily positivity rate as calculated by the state was 6.75%.

There have been 93,240 positive cases in North Dakota since the onset of the pandemic in mid-March, with 90,013 recoveries and 3,576 hospitalizations. Current hospitalizations were unchanged at 98. About 379,000 people in the state have been tested, and nearly 1.4 million total tests have been conducted.

Active cases statewide on Monday were at 1,915, up 63 from Sunday. They totaled 318 in Burleigh-Morton.

Active cases dropped significantly in December, declining by 67% statewide and by nearly 70% in Burleigh-Morton.

State officials and some health experts have credited in part a statewide mask mandate and the business restrictions implemented in mid-November. But some people view those measures as infringements on personal freedom. Violations could be punishable by a fine of up to $1,000. Repeat violations could lead to a fine up to $1,500 and 30 days in jail.

Bars and restaurants also were restricted to takeout, curbside and delivery between 10 p.m. and 4 a.m. That order also was to expire Friday, but Gov. Doug Burgum on Dec. 22 lifted it early, citing a decrease in active COVID-19 cases and hospitalizations.

Bismarck police on Dec. 11 responded to a call that a downtown bar owned by Rick Becker, a Bismarck plastic surgeon and Republican state representative, was open later than the curfew. Police made no arrests and issued no citations, and later said their goal was to educate about the state measures.

Becker at the time said he believes the governor’s order “has no basis in science or medicine" and that it was "unfortunate" that it was enforced. On Monday, he sat at a table outside his bar on Main Avenue to talk with passersby about the mask mandate, which he opposes. The table included a sign stating "Governor Burgum's Mandate Didn't Change the Curve, Change My Mind."

"My position is clear, but I can't get anyone to engage in an intelligent conversation," he said. "I'm trying to open the doors for some civil discussion."

State health officials on Tuesday reported 17 more coronavirus-related deaths, a drop in active cases and hospitalizations, and more than 22,000 doses of vaccine administered.

State health officials reported slight increases in COVID-19 active cases and hospitalizations as well as 11 more deaths on Friday, as the sta…

Mike Coots, left, of Hebron, talks about the statewide mask mandate with state Rep. Rick Becker, R-Bismarck, on Main Avenue in Bismarck on Monday. Becker sat behind a table with a large sign attached stating "Governor Burgum's Mandate Didn't Change the Curve, Change My Mind." Becker, a plastic surgeon and bar owner, is a critic of the mandate. Coots agreed with Becker on the issue.

North Dakota Gov. Doug Burgum at an October briefing at the Capitol.