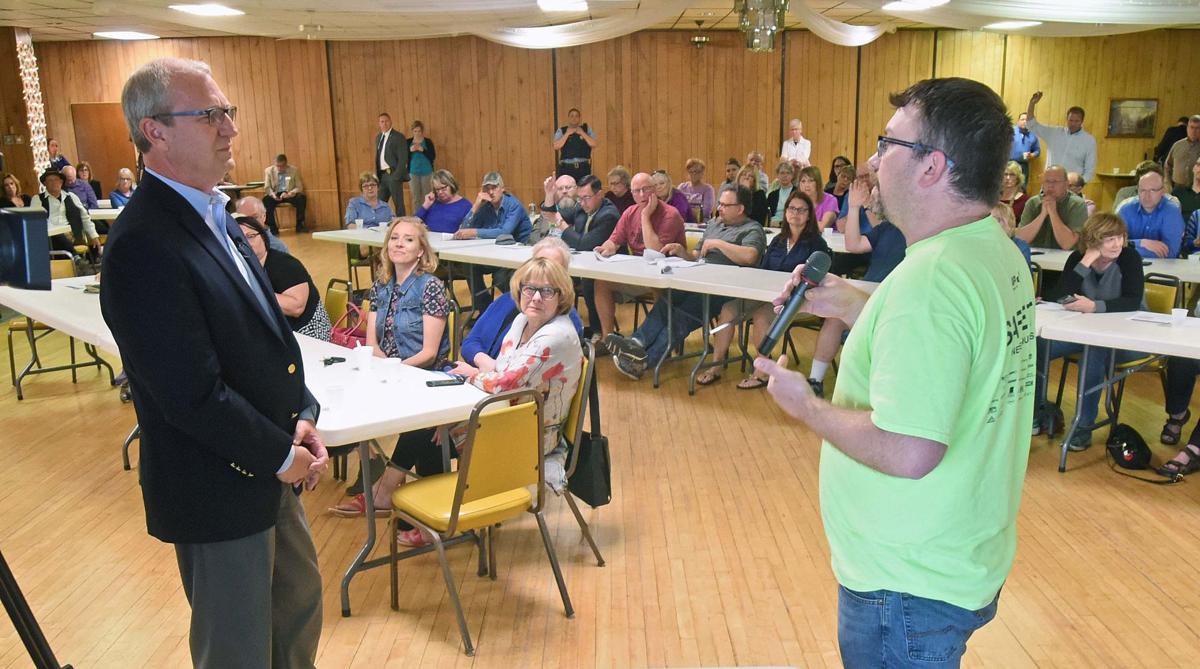 Rep. Kevin Cramer, R-N.D., left, listens to Patrick Engelhart pose a question during Thursday's town hall meeting at the Bismarck Eagles Club. Engelhart, who was among the more than 80 people at the meeting, said he is an Army veteran and resident of Bismarck. 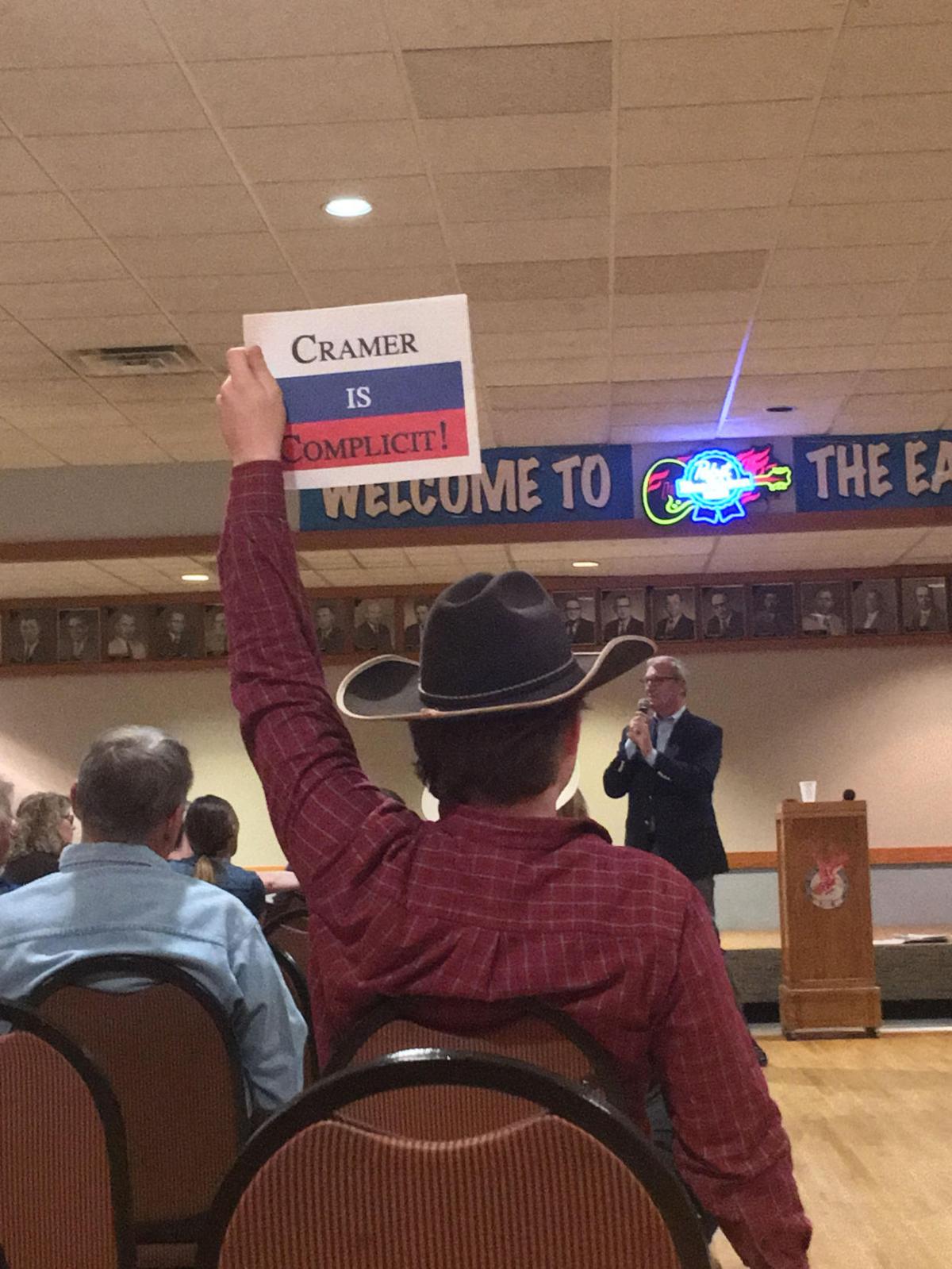 A constituent holds a sign during a town hall meeting held in May by Rep. Kevin Cramer at the Mandan Eagles Club.

Two people were removed, but not arrested, from a rowdy town hall meeting held by Rep. Kevin Cramer, R-N.D., Thursday afternoon in Mandan. Afterward, the congressman admitted it was the first time a constituent had laid hands on him and lightly pushed him during a policy debate in public.

Cramer faced a crowd of about 80 people at the Mandan Eagles Club, with a majority of attendees jeering him during a question-and-answer session primarily focused on health care reform and his vote on the American Health Care Act.

Hazen resident Mike Quinn rose on multiple occasions and approached Cramer, accusing him and others who voted for health care reform as undermining current health care law and negatively impacting millions of people, including some in the room.

Prior to his shouting at Cramer, an area woman had given a tearful testimonial about her young child whose serious medical conditions has racked up significant medical expenses and debt.

At one point while walking toward Cramer shouting questions, Quinn was grabbed by the throat by a Cramer supporter in the crowd, who was quickly tossed from the gathering.

Shortly thereafter, Quinn’s final outburst led to his ejection. After taking dollar bills out of his wallet, he attempted to shove them into Cramer’s suit pocket, lighting pushing him in the process while saying his money could go toward the medical expenses of the woman’s child.

A Mandan police officer said no one was arrested.

“I don’t mind confrontation,” Cramer told reporters after the 90-minute event in Mandan, which was followed town hall at the Bismarck Eagles Club at 5 p.m. and attended by at least 80 people. “My concern was he was dominating, and no one else could participate.”

The Mandan town hall was among the most rowdy crowds he has experienced during his time in office, according to Cramer, who said the incident has caused him to think a bit more about security, though he hopes there’s never a need to curtail the access he has enjoyed with constituents.

A number of attendees questioned his vote on the AHCA, which passed the House 217-213 earlier this month. The Senate is expected to craft a vastly different version of the bill in the months ahead.

Among the provisions in the AHCA is replacing the subsidies to help purchase individual plans on marketplaces with tax credits. A series of taxes passed in the Patient Protection and Affordable Care Act, also referred to as Obamacare, also would be eliminated, along with allowing insurers to charge people with pre-existing conditions more for insurance.

These and other provisions of the bill prompted numerous jeers and questions from those in attendance.

Quinn said, in a phone interview following the event, his actions were prompted by what he thought were efforts by Cramer to dodge harsh questioning.

“It was spur of the moment. I was just so mad. I just kept getting angrier and angrier,” said Quinn, insisting that his actions weren’t pre-planned or on behalf of any organization.

He pointed to the Congressional Budget Office estimate that the House health care plan would cut about $880 billion over 10 years in Medicaid spending.

The overall Republican bill is a large tax giveaway to the wealthy, according to Quinn, who characterized the bill as unfair to people such as the woman who’d spoken about her child and millions of other nationwide.

“They’re going to take health care away from them,” said Quinn, adding, if there were more taxes on wealthier people, sufficient coverage could easily be afforded to all in need.

Attendees also questioned Cramer’s support for President Donald Trump, with several people accusing the president of being dishonest and unethical in his conduct in office.

U.S. Rep. Kelly Armstrong, R-N.D., will seek reelection to Congress, and already has one Democratic-NPL challenger.

More than 900 new electronic pollbooks are set to go out to North Dakota counties after training sessions this month.

The North Dakota Department of Commerce has launched a film and Instagram partnership program to increase awareness and share the state's story.

Gov. Doug Burgum sees accomplishments but more work to do with tribes in North Dakota.

Outside audit of North Dakota auditor's office finds some errors

An audit of the North Dakota auditor's office found some bookkeeping errors.

Bruce Strinden has served on the county commission since first being elected in 2008. He said he feels county commissioners should "self-impose" term limits since there aren't any for commissioners. After 12 years, it was time to give up his role for someone else, he said.

Rep. Kevin Cramer, R-N.D., left, listens to Patrick Engelhart pose a question during Thursday's town hall meeting at the Bismarck Eagles Club. Engelhart, who was among the more than 80 people at the meeting, said he is an Army veteran and resident of Bismarck.

A constituent holds a sign during a town hall meeting held in May by Rep. Kevin Cramer at the Mandan Eagles Club.