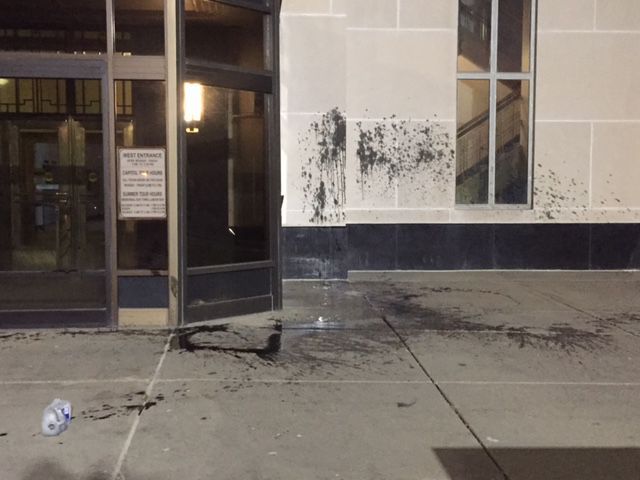 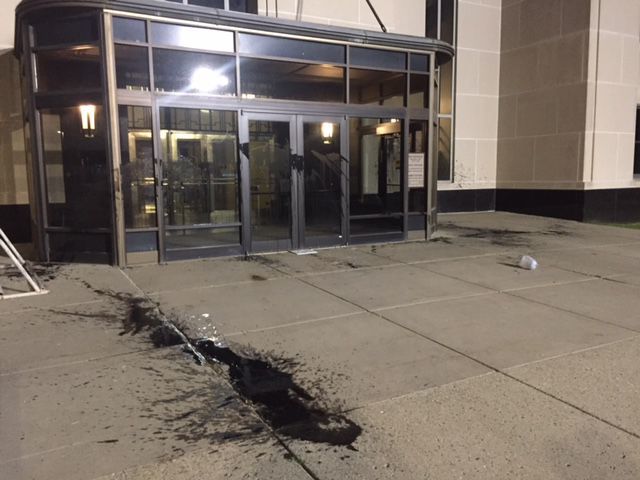 Motor oil was poured at the entrance to the state Capitol building in Bismarck.

The entrance to the state Capitol building was vandalized Monday night, and officials say the crimes may be related to ongoing Dakota Access Pipeline protests.

Shortly after 9:30 p.m. Monday, security footage showed two individuals dressed in black pouring motor oil outside the west entrance of the Capitol, leaving the substance on the wall, sidewalk and glass windows, according to the North Dakota Highway Patrol.

A sign was placed amid the vandalized property: “You can’t drink oil.”

John Boyle, director of North Dakota Facility Management, said he’d never in his 14 years in his role seen any politically-oriented vandalism to that extent on the grounds.

The west entrance was closed from about 6:15 to 8:15 a.m. There was no damage to the glass or building. Staff used pressure washers and degreaser to remove the motor oil.

“I can’t say for certain that this was done by anyone that has been directly involved in the protests,” North Dakota Highway Patrol Lt. Tom Iverson said. “(They) obviously had a cause that is against oil.”

Vandalism on the Capitol grounds is rare and typically is confined to a few incidents of graffiti and damage to state-owned vehicles parked on the property per year, according to Iverson, who characterized the incident as "unnecessary."

“Our officers have better things to be doing than to be responding to such childish acts,” Iverson said.

The incident is under investigation. Anyone with information is asked to contact the North Dakota Highway Patrol at 328-2455.

The Burleigh County Human Service Zone has a permanent leader.

Driver of prisoner transport van gets probation in fatal crash

The driver of a Pierce County prisoner transport van involved in a fatal crash near McClusky has been sentenced to nearly a year of unsupervised probation.

Motor oil was poured at the entrance to the state Capitol building in Bismarck.