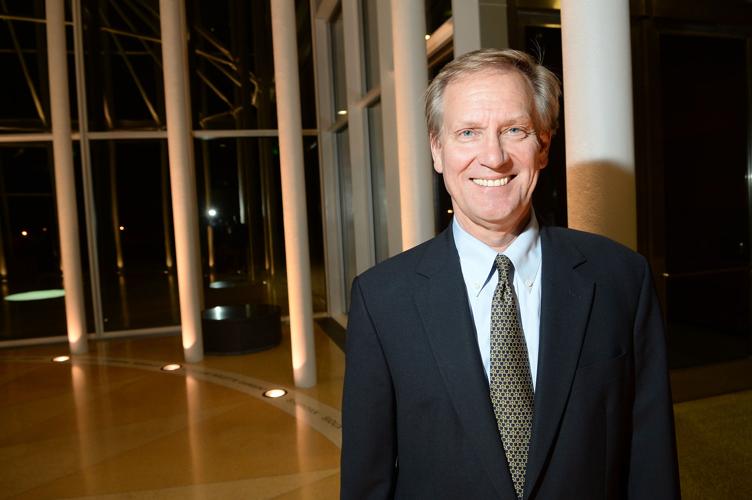 George Sinner inside the Heritage Center on Oct. 6, 2014. 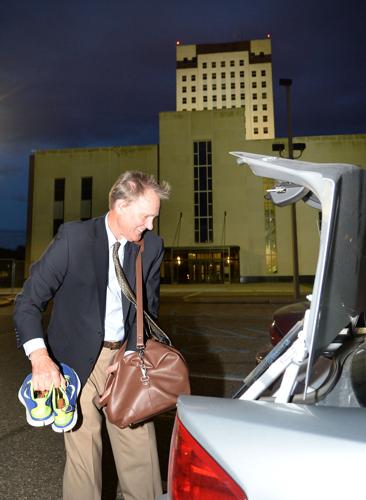 George Sinner puts his luggage and running shoes into his car after visiting the Capitol in Bismarck on Oct. 6, 2014. Sinner, a Democrat, is running for the U.S. House against Republican incumbent Kevin Cramer 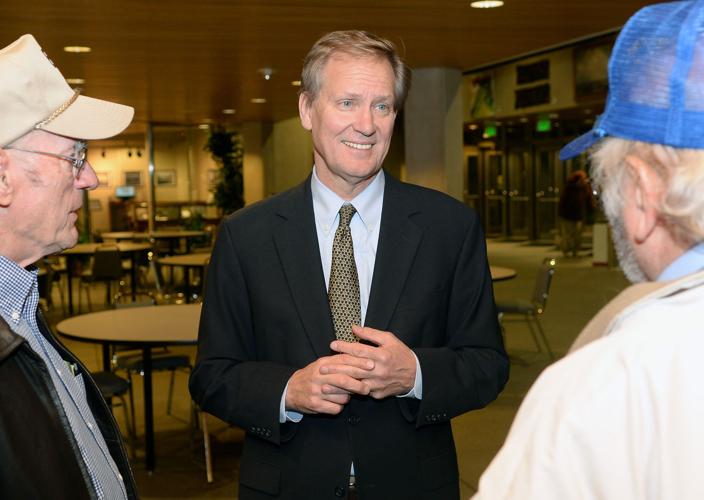 BISMARCK, N.D. -- State Sen. George B. Sinner says if elected he believes he can do what many members of Congress seem incapable of doing: sit down at the table, talk out complex issues without grandstanding and rank partisanship and come to a reasonable compromise.

Sinner, 60, is a freshman Democratic senator from Fargo. His father, George A. Sinner, was the last Democrat to serve as governor of North Dakota from 1985-92.

For more than 30 years, Sinner has worked in the business community. Outside of the Legislature, he’s an agriculture-business banker and senior vice president for American Federal Bank in Fargo.

During his first session, he was a member of the Transportation Committee, as well as the Industry, Business and Labor Committee.

On Sept. 9, Sinner found himself campaigning in Bismarck addressing the Bis-Man Chapter of the National Active and Retired Federal Employees Association.

Sinner told members he was compelled to run because of what he called a lack of interest by the Republican majority in the House to do its job.

“These guys don’t want to sit across the table and work to get things done,” Sinner said.

Sinner said this attitude among a faction of congressional Republicans forced the government shutdown of Oct. 1-16, 2013.

Approximately 800,000 federal employees were furloughed and more than 1 million more were required to continue working despite not knowing when they might be paid. Hundreds of North Dakotans were among those who stayed home from work.

“We as a country often forget that these are people behind the scenes that make the government run,” Sinner said.

The furloughs and shutdown occurred due to a budget showdown between Congress and the White House involving the Patient Protection and Affordable Care Act.

Lawmakers eventually negotiated a debt ceiling increase and funding of the government.

Sinner called the shutdown inexcusable, saying it cost the economy billions of dollars in productivity.

Sinner said he would work as a moderate in Congress if elected. Repeatedly during the campaign, he has cited his friend Democratic Rep. Collin Peterson of Minnesota as a major influence. He said Congress has largely become a toxic place with hardliners incapable of compromise. Sinner has pointed to Peterson’s leading role in crafting a new five-year farm bill as the type of leadership to aspire to.

Sinner accused his opponent of taking the opposite approach to legislating.

“I think our congressman’s been part of the problem,” Sinner said.

Sinner said Cramer’s siding with fellow Republicans in forcing the government shutdown was a mistake. He said Republicans’ vote to split food stamps from the rest of the farm bill in mid-2013 pushed the bill’s passage back by months.

Sinner switched gears to discuss pensions and social programs, such as Social Security and Medicare. He said if elected he’d do everything he could to protect each of these.

Sinner noted that the country is in a tough spot with a $17 trillion national debt and a federal budget deficit of more than $500 billion. However, he said the federal government has an obligation to do right by its workers and those who in federal programs.

“We can’t start balancing the budget on the backs of our federal employees,” Sinner said. “That was a contract our government made for you … we can’t renege on that deal.”

Sinner also took aim at proposals by Republicans to convert Medicare into a voucher program in which people would be able to use the voucher to purchase private insurance.

“I think it’s obscene what they’re trying to do with this program,” Sinner said.

Sinner said he couldn’t conceive of having thousands or even millions of older Americans educating themselves on how a voucher program works and leave them to negotiate with insurers.

Sinner was asked by a NARFE member whether or not he would have voted for the Affordable Care Act. He said that was an extremely tough question to answer since he wasn’t in Congress at the time to experience the debate or the intense pressure placed on lawmakers.

“The answers to these questions aren’t easy. They take thought and they take time,” Sinner said.

Sinner said the law is far from perfect, but that there are its strong points that benefit North Dakota, such as the Frontier States Amendment. The amendment provides increased Medicare reimbursement to rural states, including North Dakota.

He said hospitals in states, including North Dakota, used to lose millions annually due to lesser reimbursements because of flaws in the reimbursement formula. The amendment was in the Affordable Care Act, which Sinner said is a key reason why North Dakota’s congressional delegation, all of which were Democrats in 2010, voted for it.

“There are some good things in it,” Sinner said.

Sinner went on to tell an often-told story he’s used on the campaign trail of his childhood, which he says defined his lifelong work ethic.

He said as a teenager a group of friends came to the family farm outside Casselton, asking him to leave and join in a ballgame.

As he was about to leave, the elder Sinner approached him and asked what he was doing. When the younger Sinner explained where he was going, he was asked if his daily chores were done. After replying that he’d finish them later, he said his father gave him a succinct lesson he’s never forgotten.

“There’s one lesson you need to learn in life … the work comes first,” Sinner said.

Sinner said throughout his business career and his first session in the state Legislature he has sought to always conduct himself with that in mind.

Sinner on the issues

Democratic-NPL state Sen. George B. Sinner has campaigned on finding compromise on areas of major contention in Congress.

George Sinner inside the Heritage Center on Oct. 6, 2014.

George Sinner puts his luggage and running shoes into his car after visiting the Capitol in Bismarck on Oct. 6, 2014. Sinner, a Democrat, is running for the U.S. House against Republican incumbent Kevin Cramer