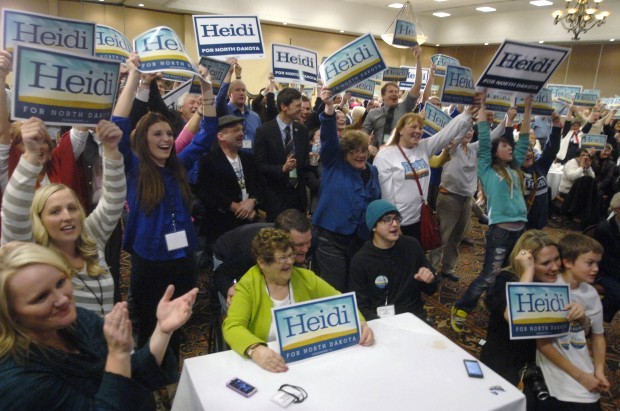 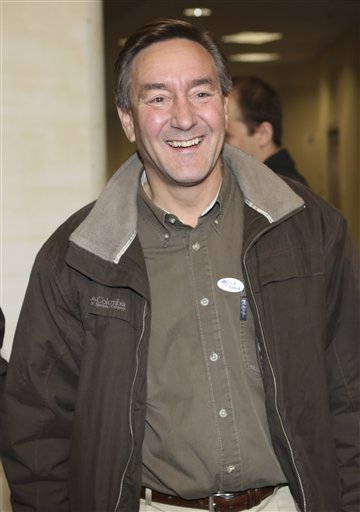 Early Wednesday, Berg for Senate spokesman Chris Van Guilder released a statement saying the race was close and "The Berg for Senate campaign will await the results of the canvassing process before making any other announcements regarding the status of the election."

He said the canvassing process is scheduled to begin Friday.

Before a packed ballroom at the Ramkota hotel in Bismarck, Heitkamp all but declared victory, telling supporters that "tonight you probably elected a United States Senator."

Heitkamp noted that canvassing begins Friday, but was cautiously optimistic that her lead would hold.

"We have been at this a long time and this is going to be successful for us," Heitkamp said.

Heitkamp’s race with Berg, which has drawn national attention in the battle for Senate control, is for the seat held by retiring Democratic Sen. Kent Conrad.

Of the remaining districts yet to report, a majority were in western North Dakota where Berg was expected to perform stronger than Heitkamp.

Heitkamp was trying to preserve a seat for the Democrats and keep the Republicans from completing a wholesale change of North Dakota’s congressional delegation from Democratic control to Republican, which began in 2010.

The Senate race proved to be the most high-profile race in North Dakota during the election cycle. Millions in campaign dollars were spent by both campaigns. Millions of dollars in advertising by third-party groups and super PACs also flowed into the state in an attempt to sway voters, saturating the airwaves.

Due to the tight race, there was the possibility of a recount. Election recount rules are outlined in Chapter 16.1-16 of state law. A mandatory recount is triggered if a candidate in a general or special election is within one-half of 1 percent of the candidate with the highest vote count. A candidate can demand a recount if they are more than one-half of 1 percent but less than 2 percent below the highest vote-getter.

Democrats held 51 seats and had two Independent senators who voted with them, producing a 53-47 majority heading into Tuesday night. Both parties saw the North Dakota race as a key race in determining the makeup of the Senate.

Berg spent nearly 26 years in the North Dakota Legislature. First elected in 1985, he rose to House majority leader in 2003 and held the post until 2009. Berg then ran for Congress in 2010 and defeated Democratic incumbent Earl Pomeroy. Berg was among the 63 net seats gained by Republicans in the House in the 2010 election.

Heitkamp’s last run for a major political office was in 2000. Heitkamp ran for governor against John Hoeven, losing by a a 55-45 percent margin.