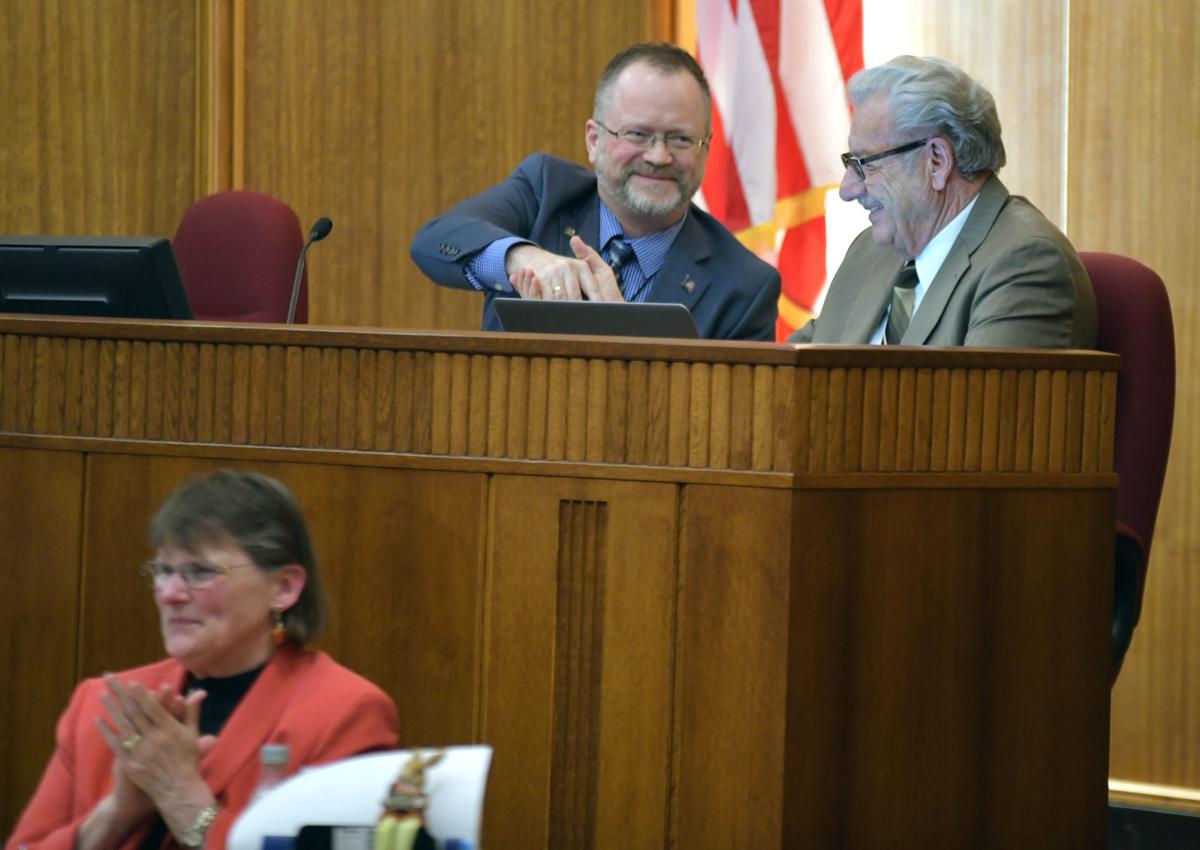 Both legislative chambers said "sine die" and dropped the gavels to adjourn the 66th Legislative Assemble of North Dakota late night on 4-26-2019, at the state Capitol in Bismarck. It was the 76th day of the session. The state constitution allows for 80 legislative days for each biennium. Of the approximatley 900 bills introduced, more than 520 bills were passed by the lawmakers. Lt. Gov. Brent Sanford, left, and Calendar Clerk Joe Wolf.

"It's not a big focus area for me," said Sanford, whose chief duties are to preside over the state Senate and to assume the governor's office upon a vacancy. He also sits on a number of boards, such as the Capitol Grounds Planning Commission and the State Investment Board.

The 2019 Legislature budgeted a 2.5% raise for state employees and elected officials that takes effect Wednesday, following a 2% raise a year ago. The raises came as essentially a pool of dollars for agency heads to award -- between $120 and $200 per employee, per month. The elected officials also were given raises, most of them in line with the 2% and 2.5% increases.

Their new salaries range from about $108,000 annually for the lieutenant governor to $168,000 for the Supreme Court's chief justice. Some political observers say the elected officials' salaries are arbitrary, could be better appraised or brought closer in line.

They're also not the highest-paying public jobs; there are Cabinet officials, judges and university faculty who earn more.

Longtime Senate Appropriations Committee Chairman Ray Holmberg, R-Grand Forks, said the salaries vary due to a historical differential, different duties and responsibilities, and in some cases certain qualifications, such as the attorney general needing a law license.

"I'm sure that every one would say that they have the most responsible job, but there is a difference," Holmberg said.

Historically, some offices have been viewed as less important, he said. But the Legislature in recent years has moved to boost those salaries, he added.

'A lot of underlying things'

The state treasurer's salary was a recent debate. The 2019 Legislature bumped the pay 8% in a "salary equity increase" to be in line with the state auditor, insurance commissioner and secretary of state, whose pay soon goes to $110,582.

For many years, the treasurer was the lowest-paid official. The treasurer is custodian of state funds, sits on several boards and runs the smallest office of an elected official -- seven people.

"You can have disagreements on different positions and whether one is harder to do than the other," Rep. Dan Ruby, R-Minot, said in a 2019 floor debate. "When you're leading people and you're in the public eye and you have a responsibility for your duty and it's being done well, it should be compensated equitably, and I think that's what we should do."

Kelly Schmidt, who leaves office Dec. 31 after four terms, said she worked for at least 10 years to increase the position's salary to reflect additional duties assigned to the treasurer and to give the job "respect and value."

"I do believe in many cases if we want good people to run for office and take on the responsibilities and the challenges of holding political, elected offices that we need to pay them accordingly because most -- and myself included -- can go to the private sector and make much more," Schmidt said. "I've never done this for the money ... It's been a job of the heart."

A variety of reasons, such as politics and personalities before and during Schmidt's tenure, have likely accounted for the disparity, according to Schmidt and Rep. Keith Kempenich, R-Bowman, who has been involved for years in writing the treasurer's budget and trying to raise the salary.

Reassigned treasurer duties and unsuccessful measures to abolish the office have been factors, he said.

"There's a lot of underlying things, but we got the office (pay) up," Kempenich said.

"That was a theme that carried on for a while and became part of the conversation," Schmidt said, adding, "I just think that many times women do have a disadvantage."

Sanford said the salaries set by the Legislature are "fairly reasonable" and seem like "a midlevel point" compared to other states. A greater concern would be if the salaries were so high that candidates sought the office primarily for the pay, he said.

"There's a reason why these public positions are not commensurate with what a person might be able to make in private industry, but also they're not like they're too low," Sanford said.

Chief Justice Jon Jensen agreed his salary is sufficient for the duties, but he doesn't believe "that carries over to our district court judges," whose salaries he said rank about No. 32 in the nation.

The variances in state officials' salaries lead former tax commissioner and lieutenant governor Lloyd Omdahl to believe there's little consistency in how the Legislature writes the salaries, which he called "sort of arbitrary."

"Very often it's based on percentage, so if you have a poor system to begin with, it's going to continue to be poor when you use percentage increases through the years," said Omdahl, who taught political science at the University of North Dakota.

He advocates having job descriptions and salaries expertly appraised.

A 2009-10 interim legislative study reviewed the salaries of North Dakota's elected executive officials in comparisons with other states. The study produced no recommendations, but its information was provided to subsequent appropriations committees.

Kempenich said the study led to "a pretty good jump" for the attorney general's salary, and other salaries "moved up probably a little faster than normal."

"There’s not a lot of science behind this, on elected officials, no," Kempenich said, pointing to county officials in North Dakota who are paid more than state leaders.

Holmberg said the Legislature's budget writers have bases for the state officials, starting at about $110,000. He, Sanford and Kempenich each said candidates know the salary when seeking office.

"I don't believe it is (a focus area) for the majority of elected officials," Sanford said.

Gov. Doug Burgum as a candidate in 2016 pledged to decline his salary to help "cut runaway government spending."

"After all, it's your money, not the government's," the wealthy former software executive said in an ad.

He gave his first six months' salary to the Office of Recovery Reinvented to combat addiction. His 2017-19 salary went to the state's general fund.

Burgums hopeful for Office of Recovery Reinvented, but its fate up to future governors

"We want to make sure that everybody, no matter what their income and their wealth status may be, feels like they can afford to run for an office," Rep. David Monson, R-Osnabrock, said last year.

Governor's spokesman Mike Nowatzki said Burgum has been holding on to his pay since the state's new budget cycle began a year ago. The governor plans to donate the money, but Nowatzki said a recipient has not yet been determined.

Omdahl said the governor's salary is "minimal" in the big picture, and Burgum's pledge likely won't be seen as a precedent.

"I think they're going to look at Burgum and say that was an exception, he was wealthy, and if that's what he wanted to do with his salary, we can't expect it of everybody," Omdahl said.

Burgum-Sanford campaign spokesman Mike Schrimpf said Burgum intends to decline his salary if reelected, but it will be up to the Legislature whether he can do so. If not, Burgum will donate it to "a worthy cause," Schrimpf said.

Both legislative chambers said "sine die" and dropped the gavels to adjourn the 66th Legislative Assemble of North Dakota late night on 4-26-2019, at the state Capitol in Bismarck. It was the 76th day of the session. The state constitution allows for 80 legislative days for each biennium. Of the approximatley 900 bills introduced, more than 520 bills were passed by the lawmakers. Lt. Gov. Brent Sanford, left, and Calendar Clerk Joe Wolf. 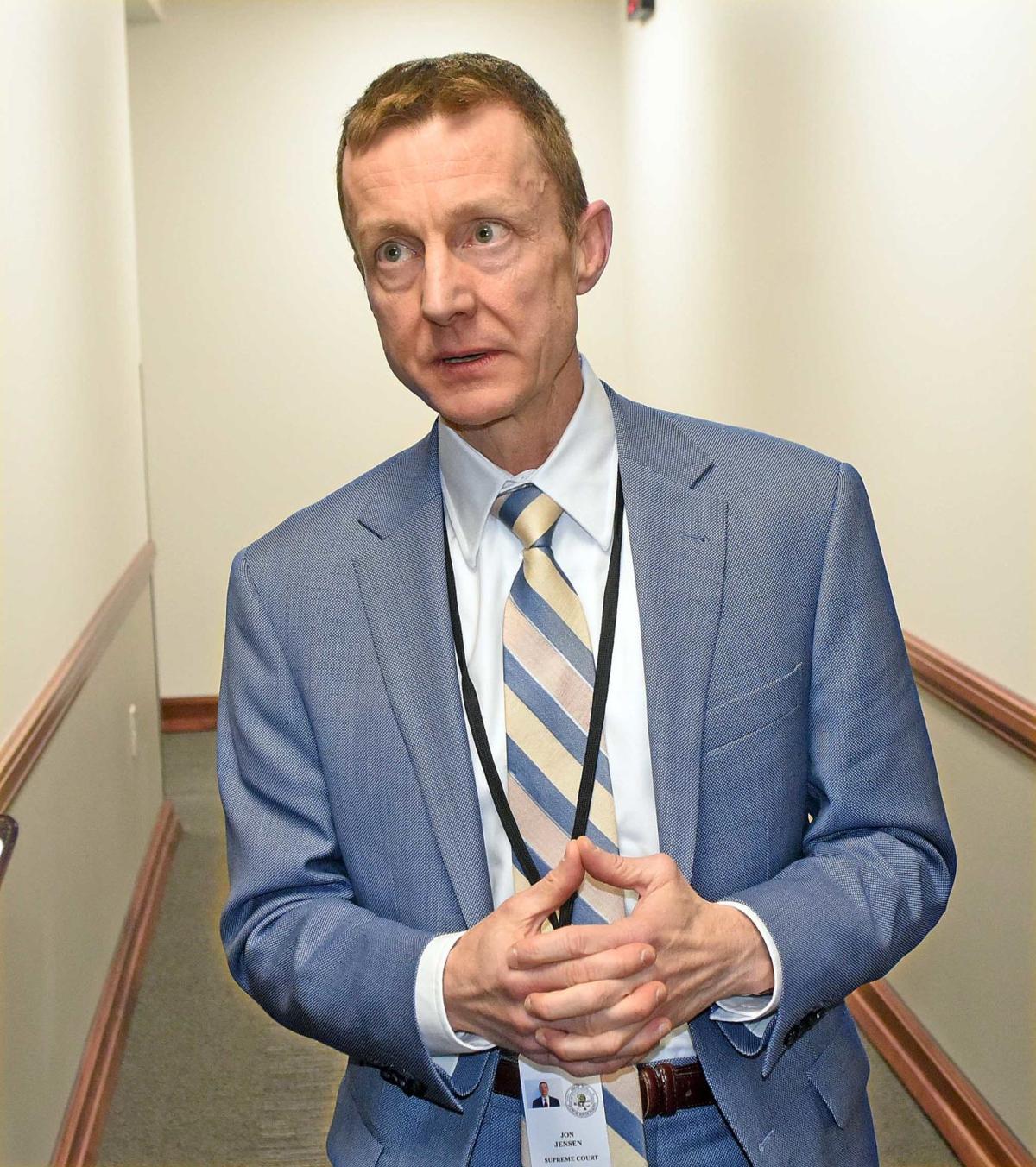