Become a Member
Read Today's E-edition
Share This
Make oil work for the people, says Taylor
0 Comments
Share this
1 of 2 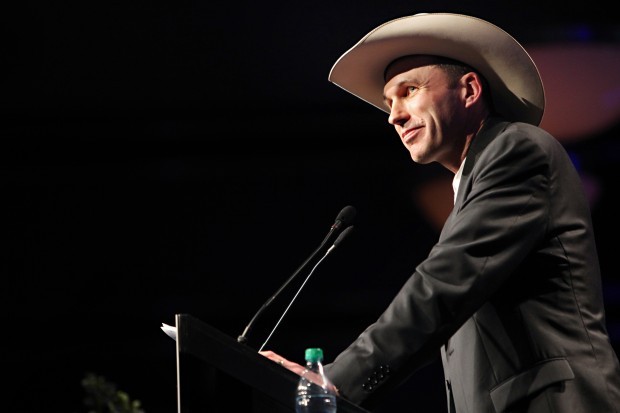 Ryan Taylor, the North Dakota Democratic candidate for governor, speaks to the state Democratic convention at the Alerus Center in Grand Forks on Friday, March 16, 2012, shortly after convention delegates endorsed him. 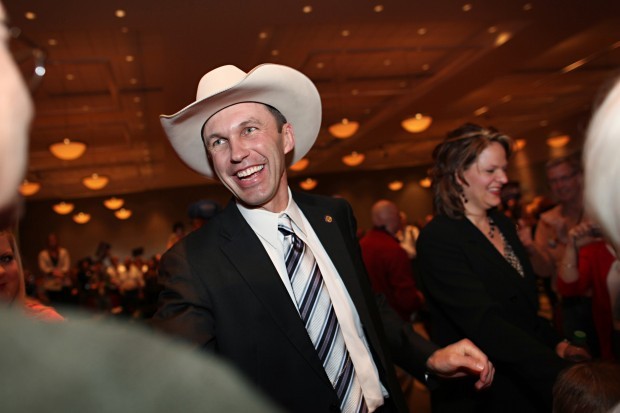 Ryan Taylor, the North Dakota Democratic candidate for governor, greets a supporter at the state Democratic convention in Grand Forks on Friday, March 16, 2012.

“What can I say?” Taylor asked a sea of supporters, some wearing blue foam cowboy hats modeled after the white hat Taylor often dons. “I accept this party’s nomination.”

After a brief introduction, Taylor immediately pursued a theme of working to take the state’s successful economy and using it to build a prosperous future for all North Dakotans.

“It’s about a new beginning and an opportunity to elect a people’s governor of North Dakota,” Taylor said.

Taylor spoke of having an open door policy in which ordinary North Dakotans will have access to the governor’s office the same as those in the oil and gas industry do. He said contrary to accusations made against him by opponents across the aisle as being anti-oil, he’s quite in favor of oil production.

“I’m all for the Bakken, the Three Forks, Tyler. Heck, I’m even for the Nesson Anticline,” Taylor said.

However, he said, he’s also for the “water and soil” above it as well as doing as much as possible to protect the rights of landowners and mineral rights owners.

“We can take advantage of our natural resources and not be taken advantage of,” Taylor said.

Taylor attacked Republicans in the Legislature as well as Republican Gov. Jack Dalrymple on how the state’s budget surplus is being managed. He said surplus dollars should be going to education as well as permanent flood protection in communities such as Bismarck, Fargo and Minot.

“We cannot hoard more money in Bismarck and expect more from D.C. when our people are hurting,” he said.

Taylor said he would work on creating a Lasting Harvest scholarship for North Dakota students using oil revenue dollars that would help fund their college education, similar to the Hathaway Scholarship program used in Wyoming.

“We ought to not have the largest state budget surplus in the country while asking the majority of our students to take on increasing levels of student debt,” he said.

Taylor said he knows he has a difficult campaign ahead against a highly-funded opponent who has more connections. However, he said, in North Dakota most voters tend to look beyond party identification and look at the person and the ideas and causes they represent.

“When you’re doing what’s right, you’ll be surprised by people’s reaction when you do the right thing,” Taylor said.

Grand Forks delegate David Clark Thompson, who was sitting on stage behind Taylor when he delivered his acceptance speech, said he was impressed by both the message and the crowd’s enthusiastic response.

“I’ve never seen such electricity for any candidate ever for the Democratic-NPL Party. He has a great message that will resonate with all North Dakota voters,” Thompson said.

Thompson said he particularly liked Taylor’s words on the need for a balanced approach to oil and gas development.

“You can have development, you can have jobs … without sacrificing this state and the interests of its people,” Thompson said.

“Like Ryan Taylor, I’m a fourth-generation North Dakotan,” Schothorst said. “This state needs stewardship to keep it a great state for another three or four generations. We can do that with Ryan Taylor.”

Ryan Taylor, the North Dakota Democratic candidate for governor, speaks to the state Democratic convention at the Alerus Center in Grand Forks on Friday, March 16, 2012, shortly after convention delegates endorsed him.

Ryan Taylor, the North Dakota Democratic candidate for governor, greets a supporter at the state Democratic convention in Grand Forks on Friday, March 16, 2012.