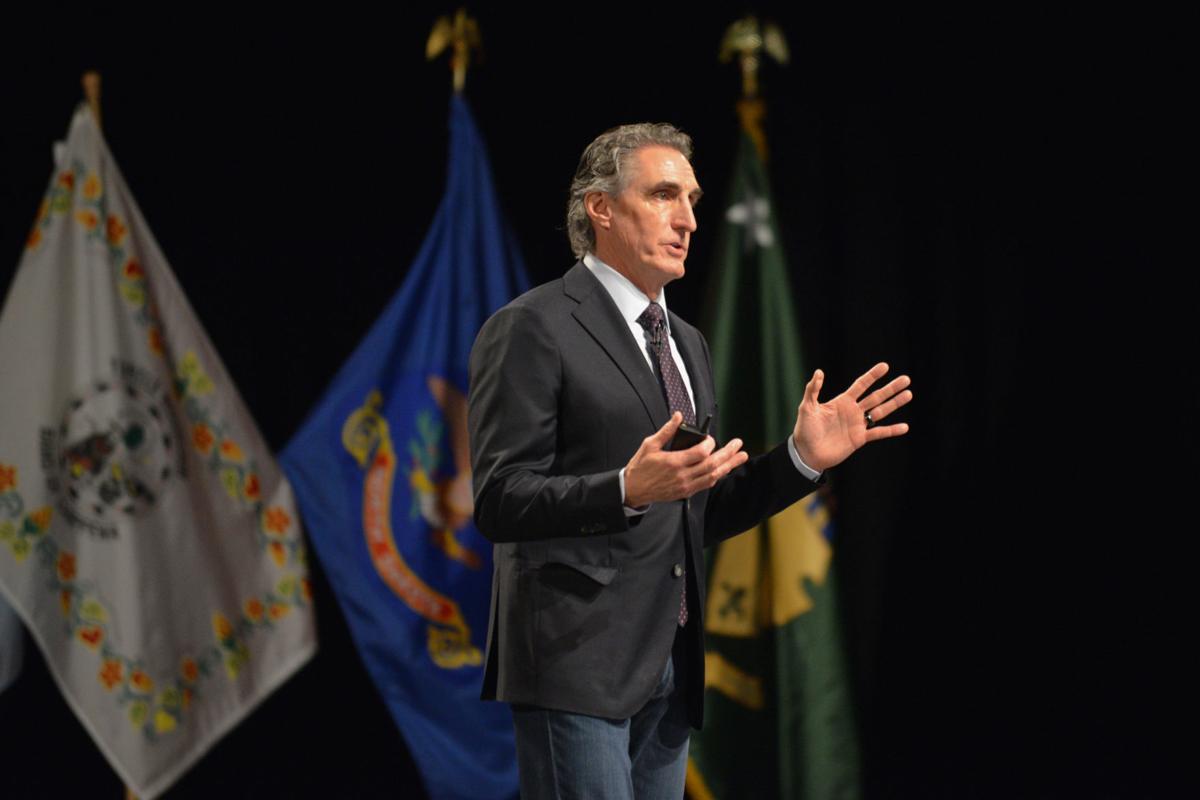 Gov. Doug Burgum gave his State of the State address on Wednesday at the University of North Dakota in Grand Forks. 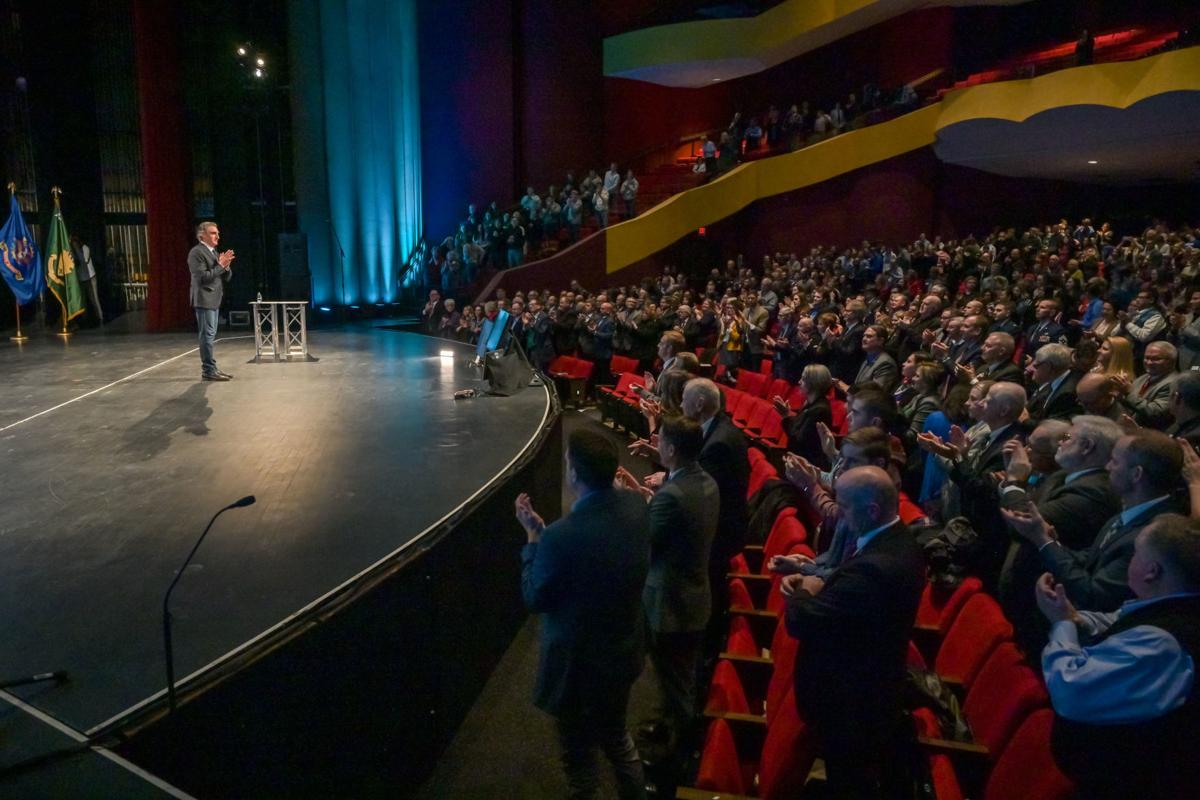 Gov. Doug Burgum gave his State of the State address on Wednesday at the University of North Dakota in Grand Forks. The first-term Republican governor called North Dakota's future "full of boundless opportunity."

Gov. Doug Burgum on Wednesday called North Dakota's future "full of boundless opportunity" as he outlined a blueprint for the state's oil tax savings fund and announced opportunities for workforce and community development.

The first-term Republican governor gave his State of State address at the University of North Dakota in Grand Forks. It's his second such address given in an off-year of the biennial Legislature, the first being in Minot in 2018. Burgum, who is seeking reelection with Lt. Gov. Brent Sanford, spoke for 1 hour and 40 minutes about North Dakota's achievements and outlook.

"The state of our state today is that it's strong, it's growing and it's full of boundless opportunity," Burgum said. "And by  seizing the opportunities that are in front of us and rejecting that piece of our culture, that self-imposed limitation that somehow in North Dakota that we're too small or we're too distant or we're too cold -- if we can get rid of all that thinking and understand that we've got the most amazing people and that our communities and our state are incredibly special and we have an opportunity to lift up everybody in our state -- and I mean everybody -- then we have an opportunity to realize our fullest potential."

‘Cusp of a new era': Gov. Burgum praises North Dakota’s outlook in State of the State

Majority Republican legislative leaders agreed that Burgum is on track, while Democratic-NPL leaders said the governor has much to do, even within his own party.

The governor emphasized the importance of an accurate count of North Dakotans in the pending 2020 U.S. census and touted his administration's efforts to improve tribal relations, combat addiction and "reinvent" state government" -- a vision he presented as a 2016 candidate.

"Some people might get confused about 'what do you mean about reinventing government?' I think the simple way to say it is we want it to be more efficient and more responsive to taxpayers," Burgum said.

The governor, a former software executive, also pressured state lawmakers on cybersecurity, pointing to city and state governments "that literally were shut down because of the infiltration of (cyber) attacks." Burgum called North Dakota "a rich target" with vulnerable information technology systems.

"They say when you're in cyber you spend dimes on cybersecurity until you've been successfully hacked from ransomware and then you throw millions at the problem," he said. "So I'm asking for dimes. I want dimes upfront, not for money later."

House Majority Leader Chet Pollert, R-Carrington, said he agrees with the governor that cybersecurity is a top priority. He attended several sessions on cybersecurity at a recent conference and plans to soon meet with North Dakota's chief information officer.

"It's enough to scare the bejeebies outta ya," Pollert said of cyberattacks.

Burgum also outlined a plan to grow the $6.8 billion Legacy Fund to more than $26 billion by 2033, which he called "a good start" for using the 10-year-old oil tax savings account.

Burgum's plan would split the fund's earnings between spending in three areas -- infrastructure, property tax relief and "transformational legacy projects" -- and deposits to the fund's principal. He named one "legacy project": career academies for workforce development.

"If it's really a legacy project it ought to have an impact not just to the current but to the future generation," Burgum said of his vision.

His administration will develop a 10-year infrastructure plan to identify priorities for the 2021 Legislature's consideration.

"His ideas may be a little different than ours, but we've got some common ground, too," Pollert said of Legacy Fund ideas.

The Legacy Fund generated $455 million in earnings in the last two-year budget cycle. A committee of state lawmakers is taking public input on how to use fund earnings. The committee next meets in February in Watford City.

Senate Majority Leader Rich Wardner, R-Dickinson, called Burgum's speech "right on" and said "he painted the picture the way it really is in North Dakota."

"I think we're all on the same page," Wardner said. "We might approach some things a little different, but I think overall he painted the picture of what we have, what we need to do and the challenges that we need to work on."

"As the leader of his party, he has a lot to do to bring his fellow Republicans along," said House Minority Leader Josh Boschee, D-Fargo. "He can’t support candidates who aren’t supporting the vision he’s presenting, much of which we agree with. There are too many idealogues who are voting for their self-interest versus what’s best for their communities and North Dakota."

Boschee told the Tribune that Burgum counts success in much of what Democrats have "led on for years," such as displaying flags of North Dakota's tribes in the state Capitol and advancing human services and K-12 education opportunities.

Burgum also announced the Dakota Strike career expo for students in grades 7 to 12 on April 8 at the Fargodome in Fargo. The event will focus on filling North Dakota's workforce shortage and showcasing careers in technology and other fields. That drew praise from a group that represents more than 2,000 small business owners in the state.

Burgum also marked dates for the next Summit on Innovative Education and the Main Street ND Summit, to be held from June 16-17 in Mandan and from Oct. 6-7 in Bismarck, respectively.

He also announced two new grant programs related to the Main Street Initiative on communities' economic development and infrastructure. More information is available from the North Dakota Department of Commerce.

Thirty bighorn sheep have been released on the Fort Berthold Reservation in western North Dakota.

The Dakota Strike Career Expo set for April 8 in Fargo will include a mobile app competition for students.

Gov. Doug Burgum gave his State of the State address on Wednesday at the University of North Dakota in Grand Forks.

Gov. Doug Burgum gave his State of the State address on Wednesday at the University of North Dakota in Grand Forks. The first-term Republican governor called North Dakota's future "full of boundless opportunity."