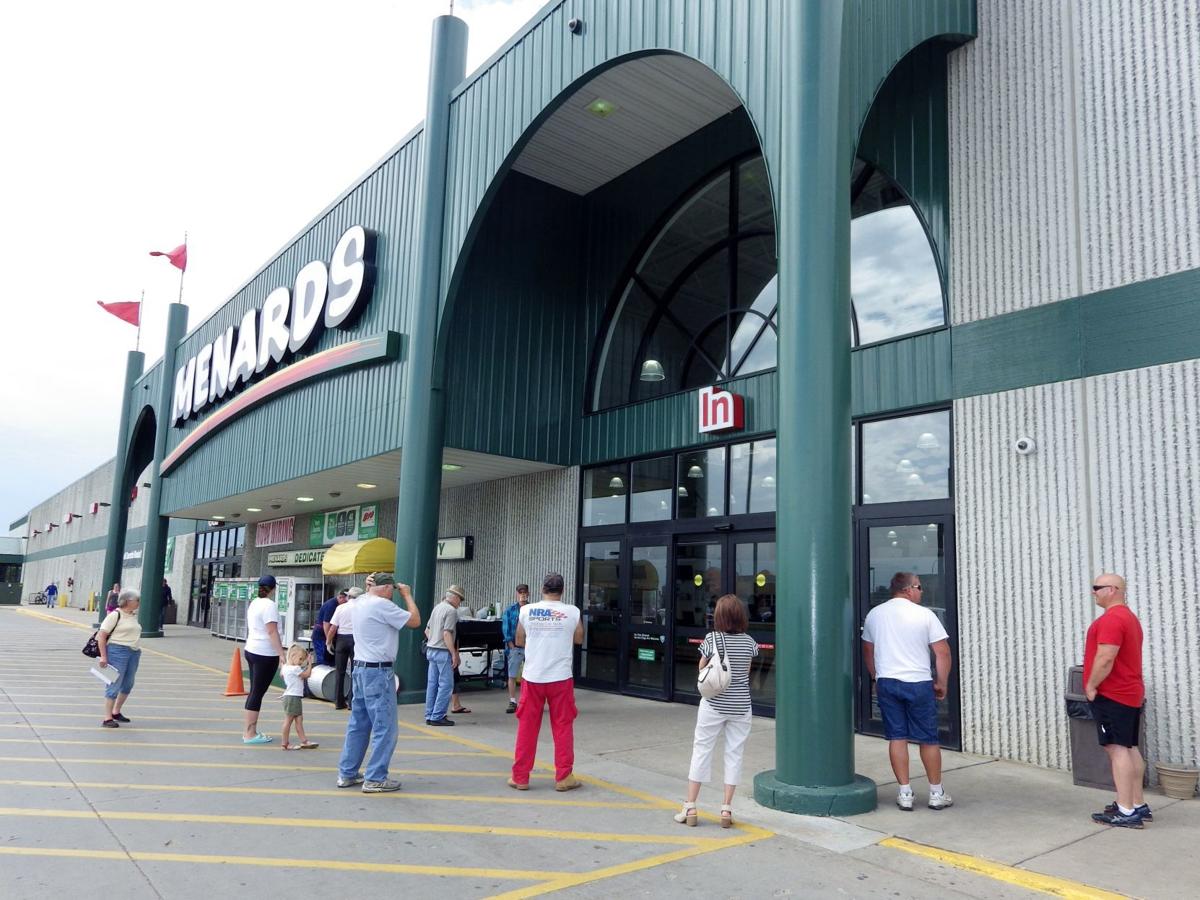 Sunday shoppers gather outside Menards in north Bismarck a few minutes before noon on July 21, one of the last Sundays to mark North Dakota's longtime Sunday morning shopping ban. Gov. Doug Burgum in March signed a repeal of the so-called "blue law" after the House and Senate passed the bill. 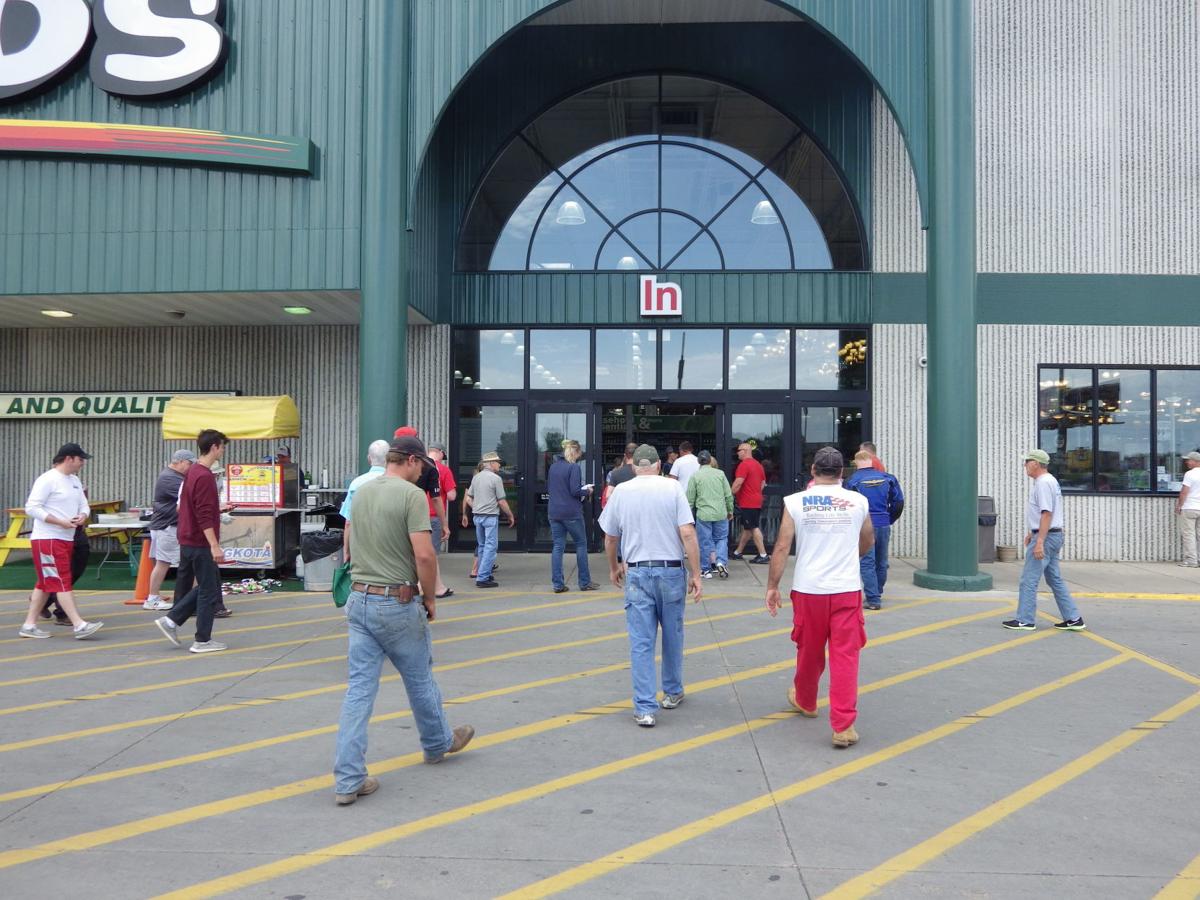 Sunday shoppers on July 21 enter Menards in north Bismarck as the doors open at noon, when retail stores are allowed to open on Sundays. The 2019 Legislature repealed the so-called "blue law," and it takes effect Aug. 1. Aug. 4 will be the first Sunday when North Dakota retail stores can legally open before noon.

Monte Preabt sat in his vehicle outside the Bismarck Menards, waiting for the clock to strike noon.

It was July 21, one of the last closures to be rendered by North Dakota’s so-called “blue laws" prohibiting Sunday morning shopping.

“I understand the reason why it was put in place,” Preabt said, pointing to familiar arguments for Sunday as a day of worship and rest. “But I think … it’s a little outdated now the way our society is now.”

North Dakota's blue laws stem from the territorial Dakota Penal Code of 1877 forbidding acts of "Sabbath breaking" and setting a fine of $1 per offense, such as "servile labor" or "undue travel."

More than 40 items came to be specifically banned by state law from Sunday morning sales, from home appliances to jewelry, mattresses to mirrors. Retail stores have been most widely affected by the blue laws. Other businesses seen as more necessary, such as gas stations and grocery stores, were exempted.

The 1991 Legislature passed a repeal allowing Sunday sales after noon but still prohibiting midnight-to-noon sales. Voters in 1992 affirmed the repeal by 64 percent on a referendum vote. Violating prohibited morning sales was subject to penalties as severe as a $1,500 fine and 30 days in jail as a misdemeanor offense.

Now all of those restrictions will be wiped away with North Dakota’s repeal of the nation’s strictest blue laws, effective Thursday, with Aug. 4 the first Sunday allowing all-day sales.

Roers-Jones, in introducing the bill, pointed to personal responsibility in making time for worship and family. Burgum highlighted "freedom, fairness and local control" in signing the long-debated repeal.

“I think we’re behind the times, and it’s definitely time to move forward with getting the businesses open,” said Kris Eckroth, waiting with her husband, Scott, outside Menards, where the Mandan couple came to pick up some miscellaneous items after church.

Dannon Nicholson waited in his truck with his German shepherd, Remy, planning to pick up some items to make his wife an anniversary gift. He’s familiar with blue laws from when he lived in Tennessee.

“I think it’s good to have off a little time on Sunday, myself,” Nicholson said. He doesn’t anticipate much Sunday morning shopping in his future, but the Eckroths and Preabt see the convenience of it.

The Rev. Dominic Bouck, of the Cathedral of the Holy Spirit in Bismarck, sees a need to protect family life in "a very 24/7 world" in which people can lose practice of their faith.

Some North Dakota lawmakers invoked a similar argument when the bill came up for its vote, but repeal proponents said it's not the state's duty to mandate a worship time.

"Once you take God out of the picture, it's understandable that you wouldn't have this special day," Bouck said.

It's not yet clear how many businesses will change their Sunday hours, though most large retail outlets, such as Menards, Target and Walmart, will do so. Bismarck's Gateway and Kirkwood malls will open earlier.

Any expanded hours of small local businesses remain to be seen. The Bismarck Tribune in March visited with a variety of local businesses, including a menswear store, bakery, thrift shop and religious goods store, where each manager pointed to the merits of Sunday morning closing, such as time with family and rest for employees.

In a state with about 30,000 open jobs by the governor's estimate, businesses that choose to expand Sunday hours could be faced with a staffing challenge, according to Bismarck Mandan Chamber EDC President Brian Ritter.

"How do they adapt? How do they adjust?" he said. "How will they change scheduling patterns to try to fill a void now or try to staff extended hours on Sundays?"

"The Tax Department verified in the '90s that more hours in which to shop does increase the propensity to spend," Rauschenberger said.

Any discernible impact from added Sunday sales could be seen as soon as early next year after a full quarter of taxable sales, he added.

"It may not be as big of a jump when Sundays were a complete blackout, no sales," he said.

US Navy sailor puts training to work in boat rescue

US Navy sailor puts training to work in boat rescue

The North Dakota Senate voted 25-21 today on a bill to repeal the state's Sunday closing law.

Matt Mitzel enjoys the peace and quiet of a Sunday morning.

Shoppers lined up with carts at the front doors to Walmart in south Bismarck. Almost time.

North Dakota's blue laws are off the books, but two Sunday restrictions remain.

Sunday shoppers gather outside Menards in north Bismarck a few minutes before noon on July 21, one of the last Sundays to mark North Dakota's longtime Sunday morning shopping ban. Gov. Doug Burgum in March signed a repeal of the so-called "blue law" after the House and Senate passed the bill.

Sunday shoppers on July 21 enter Menards in north Bismarck as the doors open at noon, when retail stores are allowed to open on Sundays. The 2019 Legislature repealed the so-called "blue law," and it takes effect Aug. 1. Aug. 4 will be the first Sunday when North Dakota retail stores can legally open before noon.